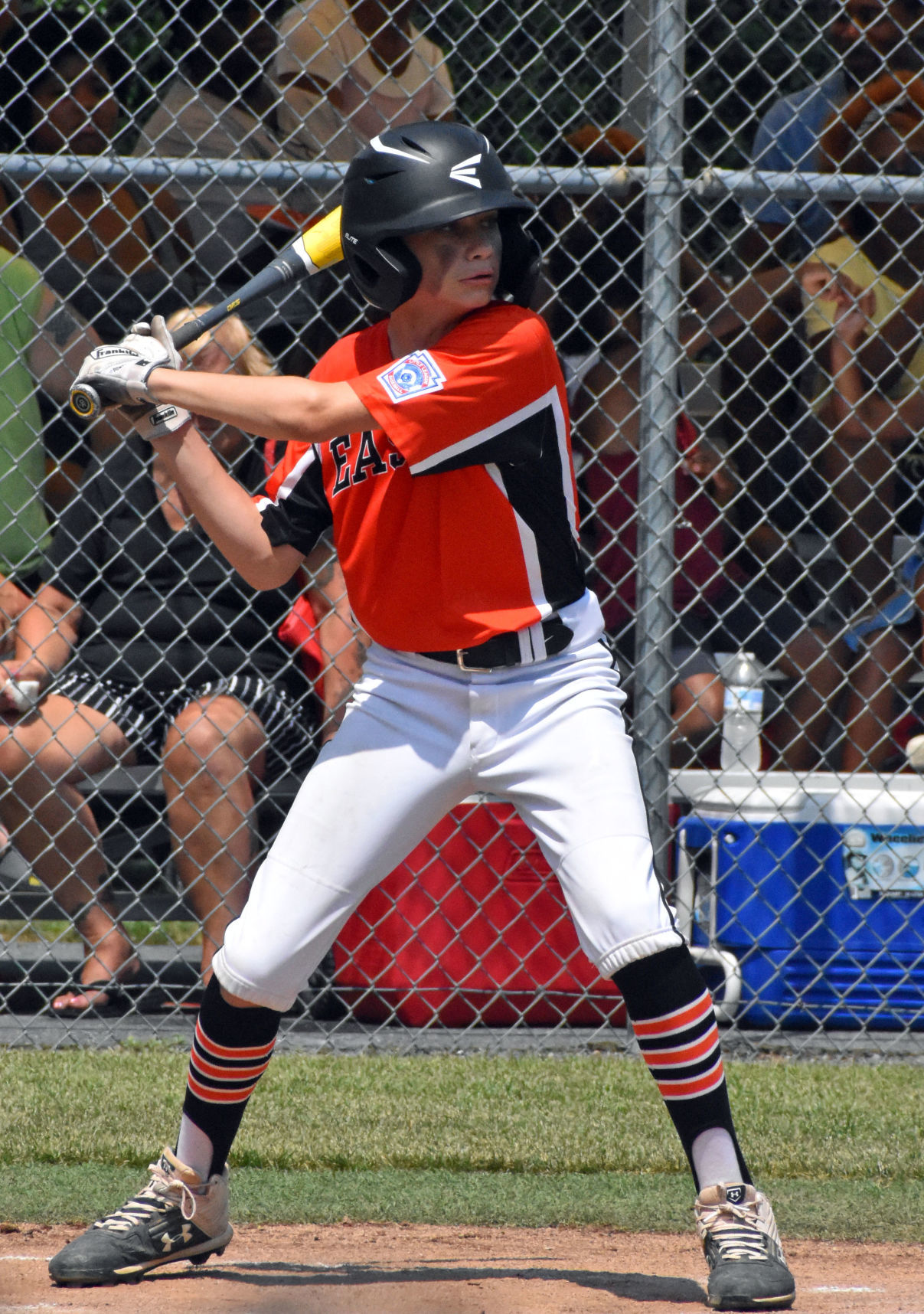 Dylan Cassell of Easton hit his second homer in as many games on Wednesday night, his solo blast in the top of the sixth inning providing the margin of victory as the District 6 champs outlasted Hughesville, 4-3, to advance to the loss-bracket final. 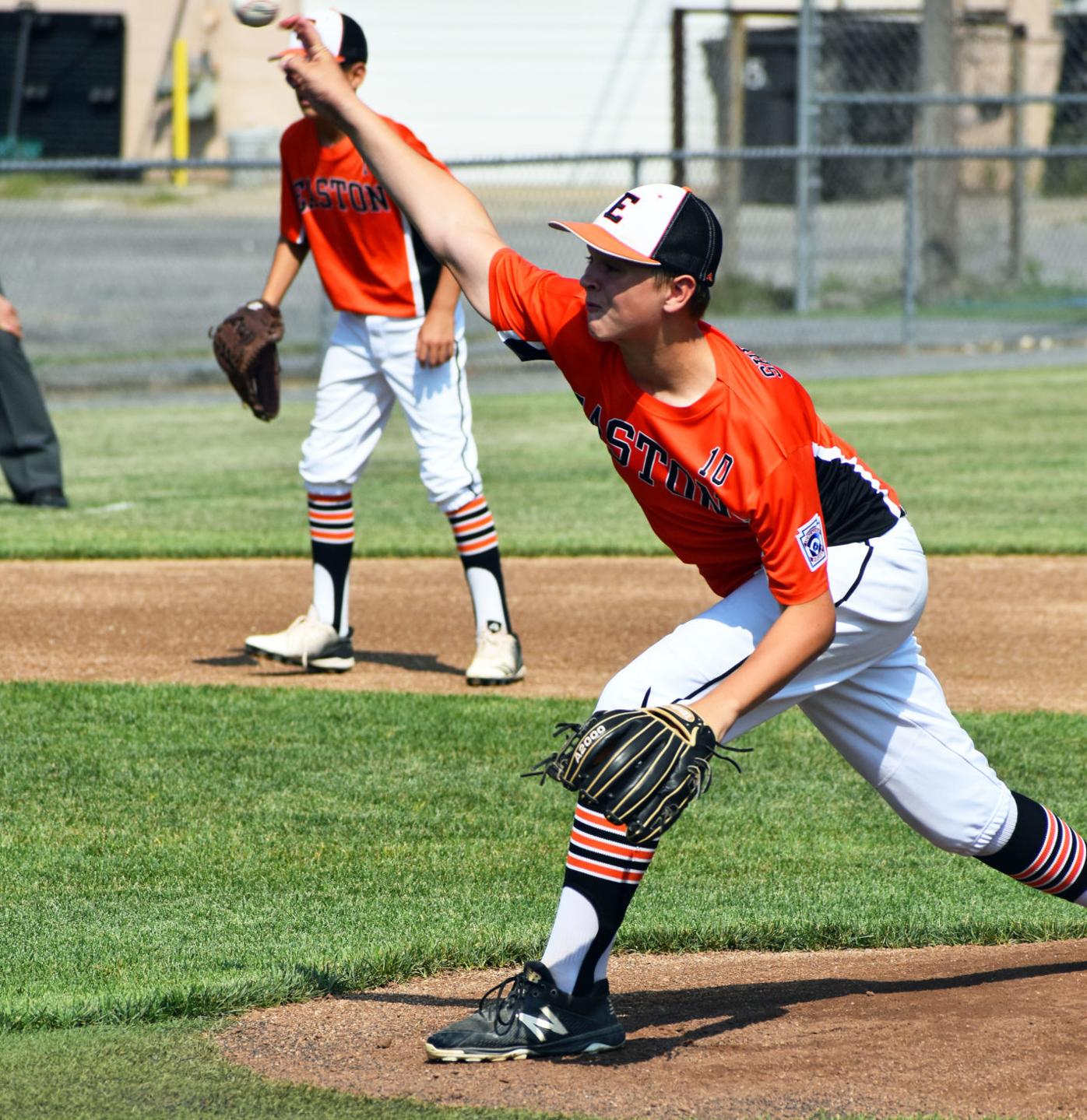 Right-hander Will Sherwood pitched 5 1/3 innings Wednesday night, striking out six, to get the win as Easton edged Hughesville, 4-3.

Dylan Cassell of Easton hit his second homer in as many games on Wednesday night, his solo blast in the top of the sixth inning providing the margin of victory as the District 6 champs outlasted Hughesville, 4-3, to advance to the loss-bracket final.

Right-hander Will Sherwood pitched 5 1/3 innings Wednesday night, striking out six, to get the win as Easton edged Hughesville, 4-3.

FREDERICK — The District 6 champion Easton 11-12 Baseball All-Stars are still in the playoffs.

Will Sherwood pitched 5⅓ innings, allowing a single earned run, and Dylan Cassell went 2 for 3, his second hit a solo home run that broke a 3-3 tie in the top of the sixth, as Easton defeated Hughesville, 4-3, Wednesday night at Staley Field.

The win kept Easton (6-1) alive in the elimination bracket of this year’s state tournament. Hughesville (5-2), the District 7 winner, is eliminated.

The winner of today’s elimination game will play tomorrow at 6 p.m. against the loser of tonight’s win-bracket final. That game’s winner reaches the championship, set for 10 a.m. Saturday at Staley Field, but will need to beat the win-bracket champ that day, and again on Sunday, to take the Maryland crown.

The tournament, originally set to run no longer than Friday night, was postponed two days due to heavy rain and thunderstorms Sunday and Monday.

Easton built an early lead Wednesday evening with single tallies in the first two innings. In the first, Colin Mooney slapped a leadoff single. Garrett Fink forced him at second, but then moved there on a bad double-play throw to first.

Sherwood reached on another error four pitches later. Fink scored on the second fielder’s choice of the inning, a Kayden Webb chopper to second base that retired Sherwood.

Cassell started the Easton second with a double to center field. Michael O’Connor sacrificed Cassell to third, and a Brady Lyons ground out gave Cassell time to dash home, making it 2-0.

Hughesville scored twice in the bottom of the third thanks to one single, an error, a walk, and two hit batters — both runs were unearned. District 7 pulled ahead soon thereafter, parlaying an infield error, and another in the outfield, to take a 3-2 lead in the bottom half of the fourth.

Despite the fielding miscues — each team made four errors on the night — Easton manager Cory Fink wasn’t terribly concerned, even though his team trailed, just six outs away from elimination.

“No, I wasn’t too worried at that point,” Cory Fink said. “We had a couple of misplays in the field today, but they kept in it, they stayed strong. ... that’s what we ask them to do, give us 2½ hours of baseball. And you’d be surprised what they can give you.

“Will was pitching a good game,” Cory Fink added. “I knew, they knew, it was win or go home. I had to burn Will tonight to make sure we advanced to the next level, but he stood in and did a great job. It was just a great pitching performance, and the boys took it from there.”

An error with one out, on a Fink grounder to the left side in the top of the fifth gave the D6 champs their chance to tie it. They took advantage of it.

Sherwood singled, and an error in the outfield gave Fink just enough time to bolt home, forging a 3-3 deadlock.

Sherwood (88 pitches, 54 strikes) got a pop out, a ground out, and the sixth of his seven strikeouts on the night in the bottom of the fifth inning to keep the game tied.

“We put runners on. Some weren’t able to make it around, we left some stranded. We had some timely hits, some good base running, though,” Cory Fink said. “And then you had that home run Dylan hit. Wow.”

Cassell’s homer, on the first pitch he saw leading off the top half of the sixth, easily outdistanced the one he clouted Sunday afternoon in 99-degree heat, when Easton demolished District 4 champ Laurel, 13-0 in four innings.

“They said, I think I heard them say, it was the longest one of the tournament so far,” Cory Fink said. “He’s just having a heck of a tournament. ... And the coaches. Denny (Raab) and Tommy (Sherwood), this is the first time that we’ve ever coached together, and we have all jelled just like a family.”

Sherwood, at 84 pitches through five innings, was allowed by rule to throw 85; thus, he could face one last batter to begin the sixth. Sherwood fanned him, and yielded the mound to Garrett Fink.

An error on a grounder back to the mound put the possible tying run on base fur Hughesville; a walk put the potential winning run at first. But Garrett Fink got the last two outs on strikes, ending the threat and keeping Easton in the tournament.

“Our ride’s not over yet. We’re going to keep fighting,” Cory Fink said. “It’s great to know that we’ve got the community supporting us, people having parties back home. The kids are just so happy and amazed to hear that they have so many people behind them.

“I’m staying the night here in Frederick,” Cory Fink said, “and the way things have happened, I ended up with a few extra kids in my hotel room. We’ve got a kind of an early start tomorrow, at 4 o’clock, but it’s all right. I think all the kids are staying up ... the parents are going back and forth.”

Conococheague, Cory Fink said, “is a tough team. Really, every team left in the tournament is — Hughesville was a tough team. For a game to be that tight for 5 1/2 innings, you’ve got to be able to hang tough.

“They had a solid performance from their pitching staff, too,” Cory Fink added. “We just came out on top tonight. ... With the tournament delayed a couple days due to the rain we’ve had, we’ve rested some pitching, and right now, since we threw Will so many pitches, we’re only out Will tomorrow. And from here, I like our chances.”

Notes: Easton outhit Hughesville 6-4. ... Garrett Fink earned the save. ... Cassell is 4 for 5 with two homers, a double, and five runs scored in the last two games. ... Easton is the last District 6 Little League baseball team remaining in the playoffs.