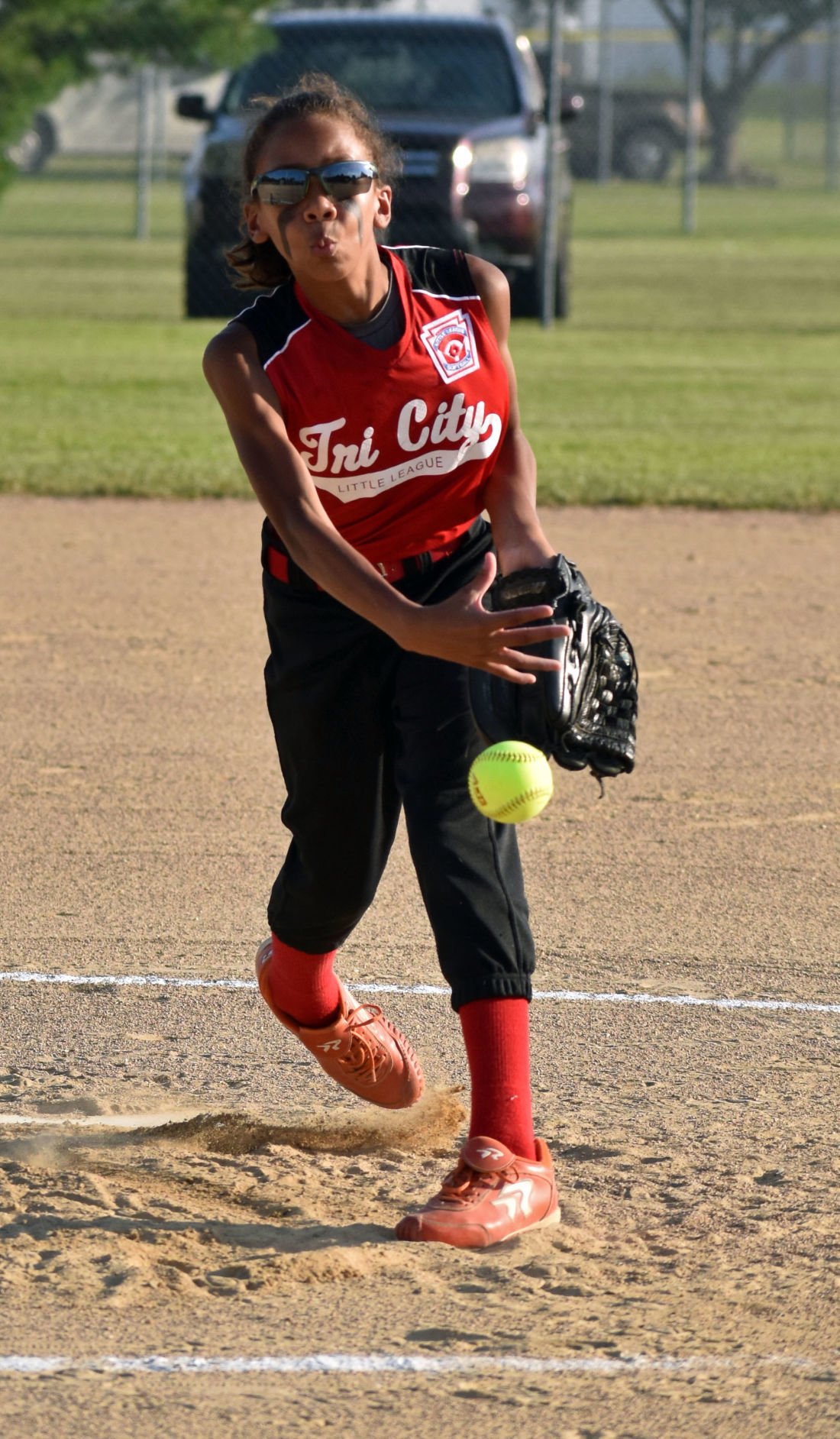 Tri-City pitcher Koryn Otey delivers a fastball during the third inning of Tuesday night’s game in Hurlock. Otey struck out 17 and pitched a no-hitter, but Tri-City fell 1-0 to North East in eight innings. Tri-City finished third in the state. 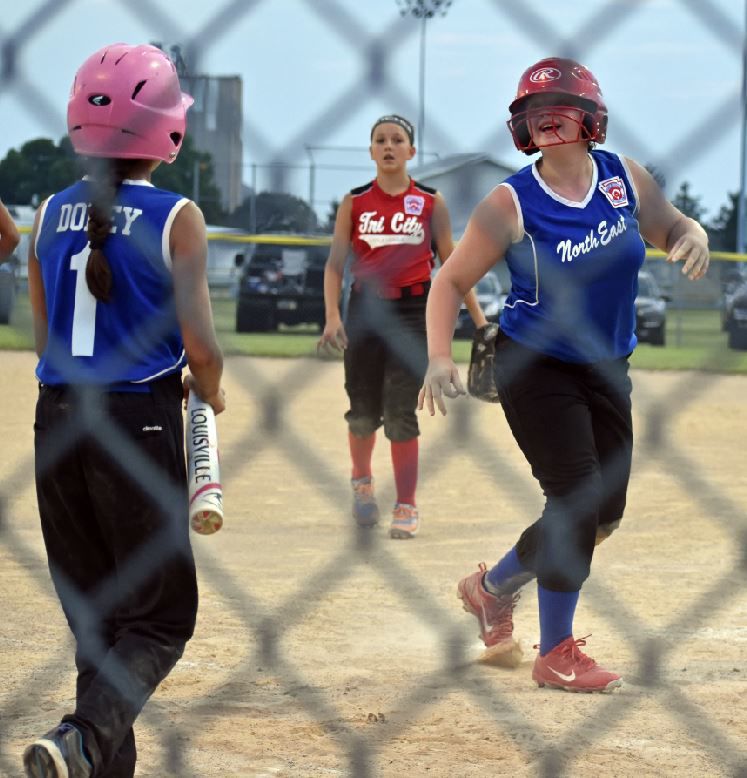 North East's Brooke Andrews smiles at teammaate Bella Dorey (1) after Andrews slid in safely with the only run in Tuesday night's 1-0 defeat of Tri-City. The win put North East in the state final against Delmar. 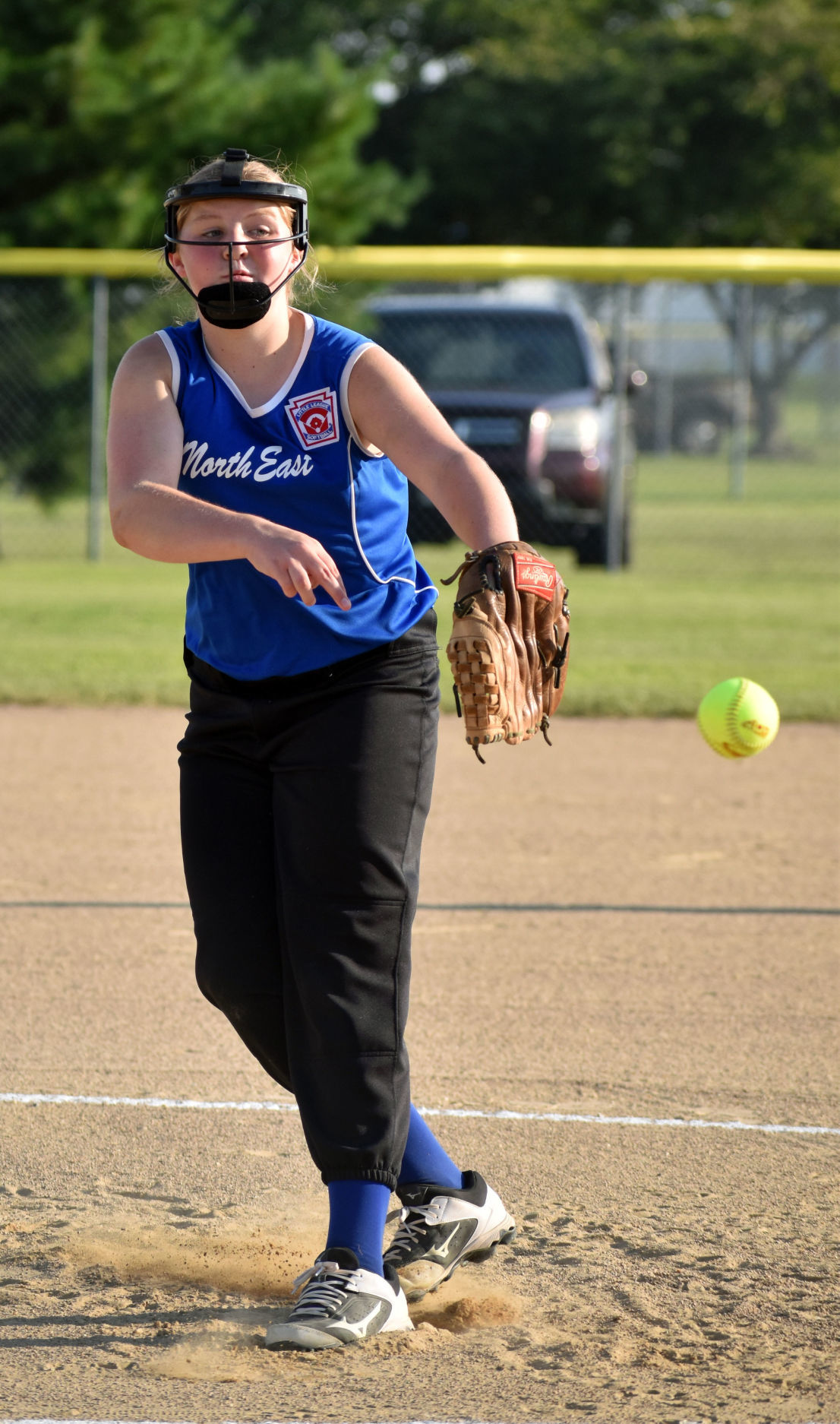 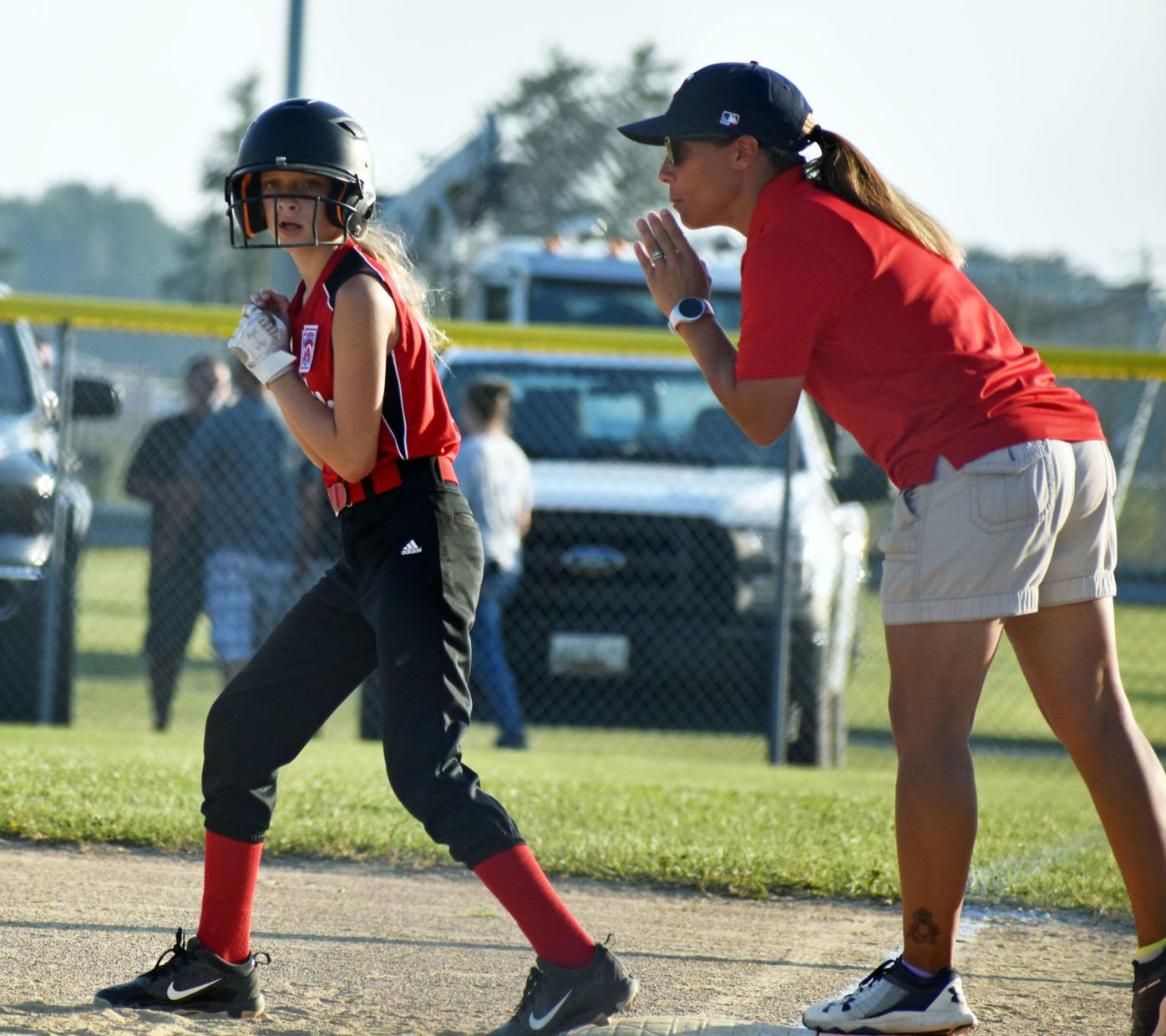 Tri-City first base coach Kareem Otey gives instructions to Adelyn Ruark, after Ruark notched the game’s only hit, in the top of the third inning.

Tri-City pitcher Koryn Otey delivers a fastball during the third inning of Tuesday night’s game in Hurlock. Otey struck out 17 and pitched a no-hitter, but Tri-City fell 1-0 to North East in eight innings. Tri-City finished third in the state.

North East's Brooke Andrews smiles at teammaate Bella Dorey (1) after Andrews slid in safely with the only run in Tuesday night's 1-0 defeat of Tri-City. The win put North East in the state final against Delmar.

Tri-City first base coach Kareem Otey gives instructions to Adelyn Ruark, after Ruark notched the game’s only hit, in the top of the third inning.

HURLOCK — Brooke Andrews was nervous at first, but when she saw the ball fly to the backstop for the second time in the bottom of the eighth inning, she said, “I was very happy — because that way, I could help lead my team to victory.”

Andrews did just that, scoring the game’s only run on a passed ball Tuesday night, as District 5 champ North East defeated District 6 champion Tri-City, 1-0, in the loss-bracket final of the 8-10-year-old state softball tournament.

Tri-City (2-2), which defeated North East 10-0 in a four-inning rout Saturday, finished third in the double-elimination tourney.

“It was just a great game played by the players,” said North East coach Joe Dorey, who led the team along with Krystal Zellner. “They did all the work; they continued to fight, an eight-inning game.

“It was kind of a pitcher’s duel for most of the game, but the girls grinded it out,” Dorey added. “In the eighth, it was now or never. But I’ve got confidence in all the girls, and so you send her (Andrews), and she made it.”

The game was a pitching clinic, Tri-City’s Koryn Otey battling North East hurler Jazmyn Martin. Otey yielded one walk through the first four innings, and eventually threw a no-hitter, striking out 17. Martin finished with a one-hitter, walking none and fanning 15.

Taylor Zellner, who walked with one out in the bottom of the second, moved up a base on a wild pitch, but was left there when Otey fanned the next two hitters. Otey, at one point struck out eight straight.

Martin was also strong, as Tri-City’s lone hit, by Adelyn Ruark in the bottom of the second, didn’t lead to anything more. Martin faced the minimum of 24 hitters in her eight frames.

By rule, though, North East needed to give all 13 rostered players at least one plate appearance, and to that point had three players without an at-bat.

Had North East taken a 1-0 lead in the bottom of the fifth, batting just four players that inning, and held Tri-City scoreless in the sixth, it would have forfeited the game, for not giving all players their one mandatory at-bat.

Otey made the issue moot, fanning three straight pinch-hitters to end the inning.

Tri-City went 1-2-3 in the top of the sixth, and a bizarre play ended the North East half. With runners on first and second with one out, Martin hit a pop-up to short. The second-base umpire signaled an infield fly, though runners could advance at their own risk.

The ball was missed, though. Shortstop Emily Boyle came up with it on the hop, and the lead runner tried to move to third. Boyle fired to Journey Pearson, playing third. Pearson stepped on the bag, thinking the play a force, but realizing it was an infield fly, chased down the lead runner and applied the tag.

Martin fanned the side in the top of the seventh. North East worked two walks, but both were stranded in scoring position on Otey’s sixth inning-ending strikeout of the game.

In the top of the eighth, international rules required the last batter of the previous inning start her team’s next inning on second base. For Tri-City, it was Lily Sterling, who moved to third on a passed ball. The next at-bat yielded a chopper to North East shortstop Rylie Baumann, who fired home to complete a 6-2 putout, retiring Sterling to keep the game scoreless.

“That was a close play,” Joe Dorey said. “I didn’t know if we could get her at first; she was running hard.”

Tri-City would leave another runner at second, Martin getting the next two batters out.

Andrews started at second to open the North East eighth. As Otey pitched to Baumann, a fastball sailed to the backstop, sending Andrews to third.

“I didn’t know if I was going to make it at first,” Andrews said, “but I managed to get there.”

Otey struck Baumann out, and had a 2-1 count on Bella Dorey when her next pitch sailed to the screen. Andrews bolted home.

Basically, it's like 'she's got to throw strikes here,'" Tri-City head coach Justin Felgenhouer said. "And the girl on third, I know is not one of their (fastest) runners. But it's just one of those things. We had the passed ball.

"Catcher comes up with it, throws to the pitcher, and we didn't come up with that throw to tag her out," Felgenhouer added. "It's a hard way to lose. .... heat of the moment, but in the end, I'm not mad. These are all the girls that got us here."

Home plate umpire Bobby Wright, celebrating his 86th birthday Tuesday and honored before the game for more than 60 years as a youth umpire, signaled her safe, ending the contest.

As she dashed to the plate, Andrews said, she “kind of had no words, because my mind was everywhere. I wasn’t sure if I was going to make it but, I thought, ‘if I do that (would be) amazing.’”