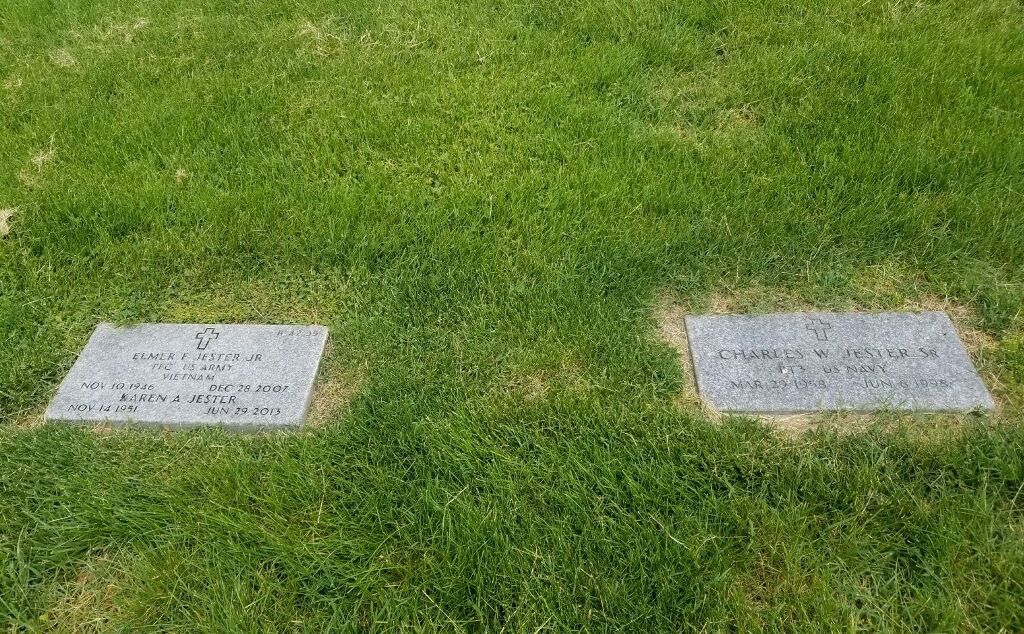 Brothers Elmer F. Jester Jr., left, and Charles W. Jester Sr. each served in the U.S. military and are buried next to each other at the Eastern Shore Veterans Cemetery at Beulah near Hurlock. 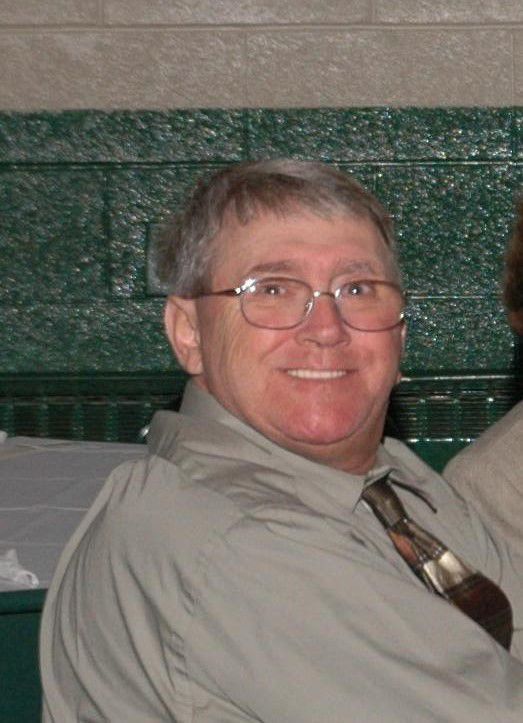 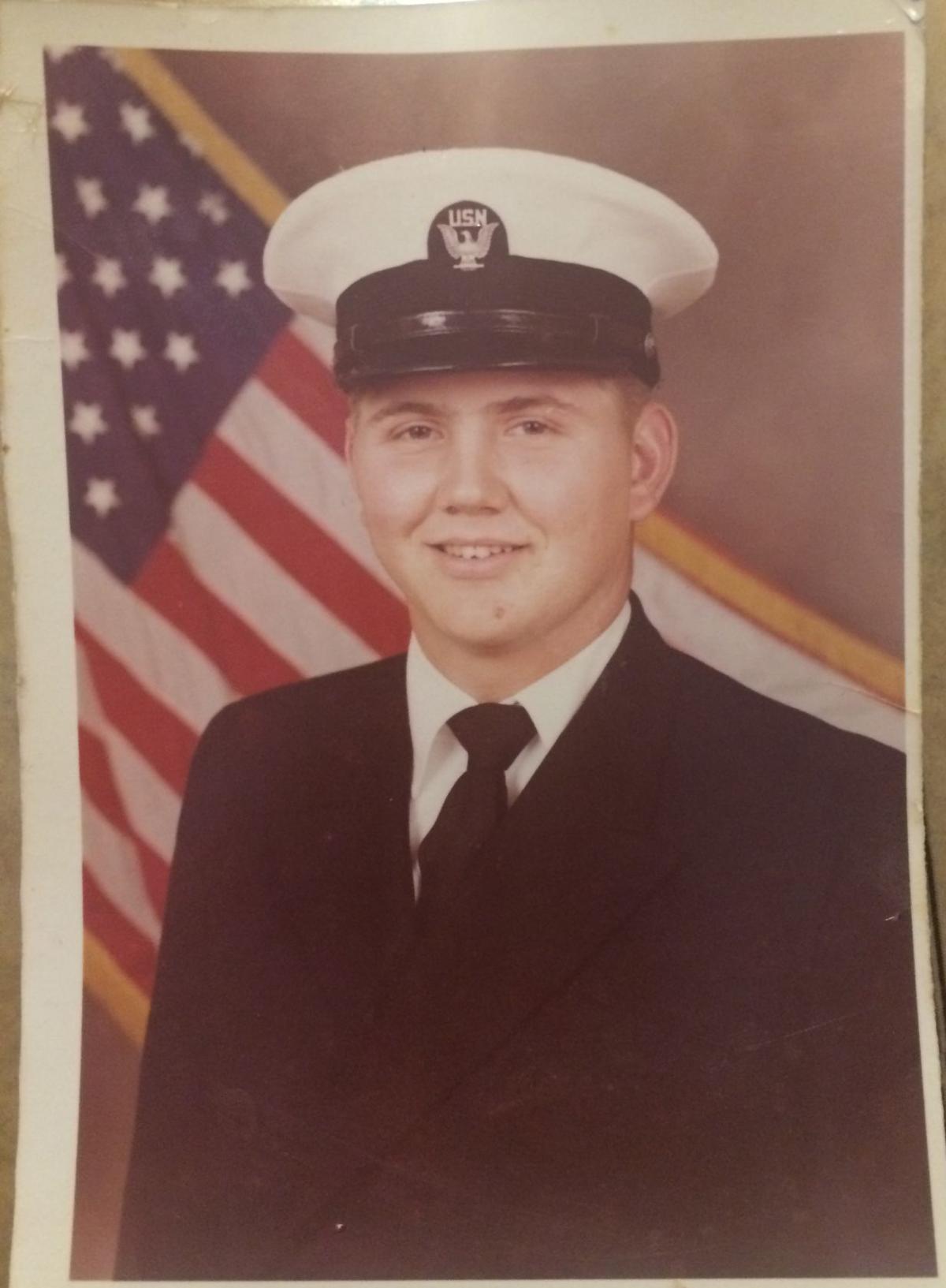 The symbolism of the brothers together is more than their blood relationship, but how the families they started continue to have a strong bond through family functions and athletics today.

Elmer, a Federalsburg native, was born Nov. 10, 1946. He graduated from Colonel Richardson High School in 1966 then enlisted and served in the U.S. Army in the Vietnam War from 1966 to 1969. He was certified in small weapons and vehicle repair.

He married Karen A. Breeding Jester, and they had a daughter, Kim.

His brother Charles, known as “Chuck,” was born on March 29, 1958, and raised in Hynson near Federalsburg. He too graduated from Colonel Richardson High. After graduating in 1976, he enlisted in the U.S. Navy and served from 1976 to 1980. He was based at Naval Air Station Norfolk, and served as a boiler technician and traveled all over the world.

He married Shirley J. Perry Jester, and they had two daughters, Sandy and Jamie, and a son, Charles Jr.

Their family roots continue to grow in south Caroline. The age difference between the brothers did not give them much of a chance at having a childhood together but as they grew older, their bond became strong through family events in Hynson.

“They were brothers, but they were great friends,” Elmer’s daughter Kim Moore said. “Because of their difference in ages, they didn’t get a chance to be together until later in life. Once the grandchildren came, that brought everyone together.

“Uncle Chuck and dad then got really, really close,” she said. “They would watch races together. Fortunately, they got a chance to have that relationship.”

Sandy Stubbs, Chuck’s daughter and Moore’s cousin, said her dad and Uncle Elmer each had a great sense of humor.

“Those Jester boys always had a lot of fun,” she said. “If you go around town and asked someone about the Jester boys, I bet the person just starts laughing. They would have a good story to tell about them.”

Each Christmas Eve, the family would go over to Stubbs’ and Moore’s grandmother’s house to celebrate the holiday.

“That is when everyone would get together, and we would have so much fun,” Stubbs said. “As the years went on, we would have all the pictures set out. The guys would sit back and carry on.

“We knew that was a tradition that we needed to keep on because it was something everyone looked forward to,” she said. “We’ve now brought in my mom’s side of the family.”

“It was in a little tiny farmhouse in Hynson, and we piled everyone inside of it,” Moore said. “You live for having those bonds, those memories. We are blessed to have them, and continue them.”

Moore and Stubbs each have the American flags from their dad’s respective funerals on display at their houses.

“We are a very close family, so having Uncle Elmer and my dad together is very symbolic of our family,” Stubbs said. “Losing dad at 40 was devastating on the entire family because our family spent so much time together. He is a big piece missing.

“Having Uncle Elmer and dad together at the cemetery makes me really happy because they are together again,” she said. “I know dad was waiting to see uncle Elmer again. I can’t imagine the fun times they are having now. I still get a blanket, go down there and sit with dad and Uncle Elmer and talk with them.”

Moore said Chuck’s death hit her dad hard because his brother was so much younger.

“He would say, ‘It should be me, not Chuck,’” Moore said. “My dad always thought about Uncle Chuck. He loved him. But knowing they’re together at the cemetery means everything to us.”

Moore and Stubbs each said their dads did not talk much about what went on during their time serving in the military but taught them the importance of respecting the country, flag and military.

“Dad talked about other people more than what they did in the military,” Moore said. “He talked about the relationships they made. With him serving in Vietnam, and you get this from others who served then, they don’t talk much about their time there.

“Dad was very proud that he served,” she said. “We are proud of him. To this day, if one of our kids went into the military, we would support them because we understand the importance of serving our country. I’d be proud if they did.”

Stubbs said her dad enlisted as a means to provide for the family, and talked mostly about the good relationships he made.

“He had a lot of longtime friends — people I remember going to visit,” he said. “Henry, who is now married to my mother, is one of dad’s best friends from the service.

“He instilled respect of the flag, and love of the country,” she said. “Respecting the military is something that has always been a part of our family. Dad was very persistent about that. I’ve taught my kids the same thing.”

The family gatherings continue to this day. Sandy and her husband Danny Stubbs have three daughters, Courtney, Cassidy and Megan. Kim and her husband Darren Moore have two children, son Conner and daughter Kaylie.

The love of softball has been a major bond for the Moore’s and Stubbs’, with the four daughters all playing around the east coast and at Colonel Richardson High.

“I know dad and Uncle Elmer are watching every time our girls are playing,” Stubbs said. “They would have been right there cheering, having a great time.”

Moore said having the grandchildren so close in age is a blessing.

“We’ve all been able to go to the same events and spend a lot of time together,” she said. “We are always together, supporting one another. That is dad’s and Uncle Chuck’s legacy — all of us together and having a good time.”