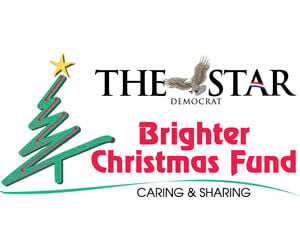 Mary is a 27-year-old mother of two children, ages 4 and 2. Mary fell in love with Joe quickly, and after a whirlwind romance, they married within six months.

Mary thought she had the perfect life until Joe started accusing her of having an affair, threatening her and monitoring her every movement. The physical abuse started with pushing and shoving and eventually escalated into severe beatings.

Fearing that Joe would kill her and her children, Mary called the domestic violence hotline number a friend had given her. After talking to a counselor, Mary decided to move into the shelter temporarily. She received a protective order and an attorney to represent her in her divorce. Mary is still in the process of leaving the abusive relationship and knows there is a long road ahead. She would be grateful to have help providing gifts for her children this Christmas.

Your donation to The Star Democrat’s Brighter Christmas Fund could help Mary provide for her family during the holiday season.

The Brighter Christmas Fund is a 501(c)(3) charity, and tax-deductible donations, which also help other families in need on the Mid-Shore, may be sent to The Brighter Christmas Fund, c/o The Star Democrat, P.O. Box 600, Easton, MD 21601. Donations also may be made online via credit card or Paypal at www.brighterchristmasfund.org. Click the “Donate” button. For more information about the Fund, call 410-200-1884.

Those sharing the spirit of giving with others this holiday include:

In memory of Paul Fallon, a wonderful Santa!

In honor of Evelyn Coleman Deel & in memory of her siblings, the Coleman Clan — Ruth, Louise, Floyd, Dot, Alma & Barbara

In memory of Marty Eason

In memory of Jean-Claude Bernasse

In honor of my grandchildren, Bradley and Evie Cole

In memory of Susie Meara