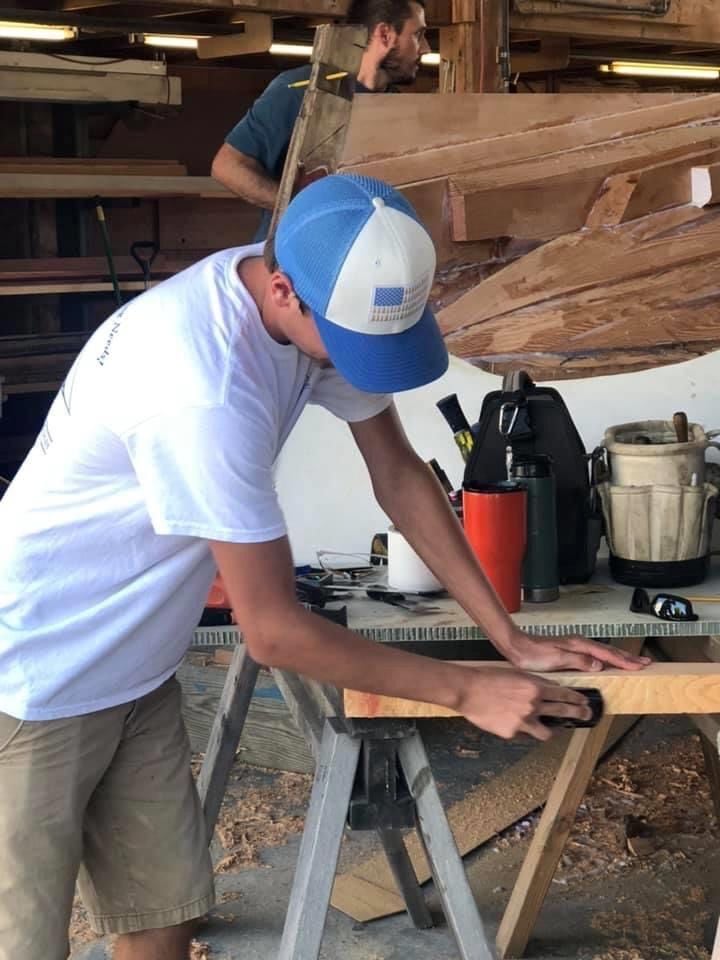 Daniel “Nate” Schultz graduated from both the carpentry and youth apprenticeship programs. He apprenticed at Campbell’s Boat Yards. 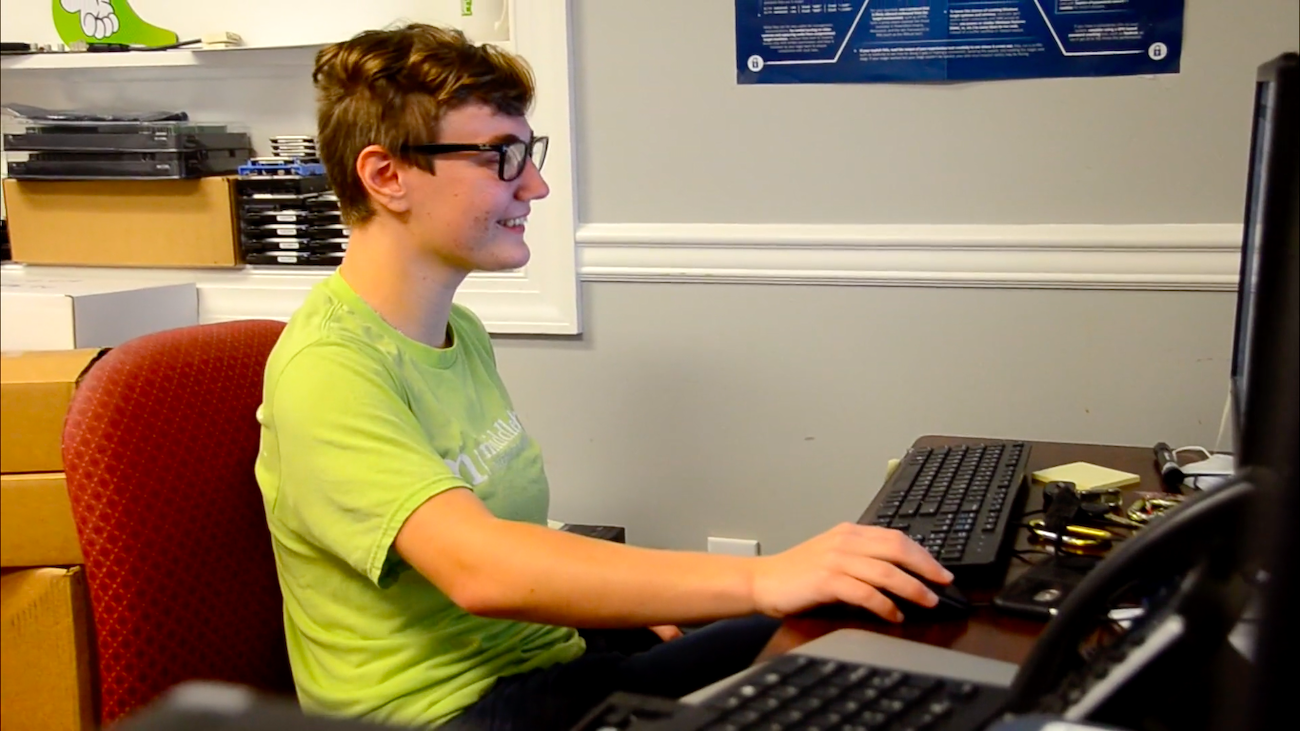 Elizabeth Wilburt works on a computer during her apprenticeship at Choptank Transportation in Preston. 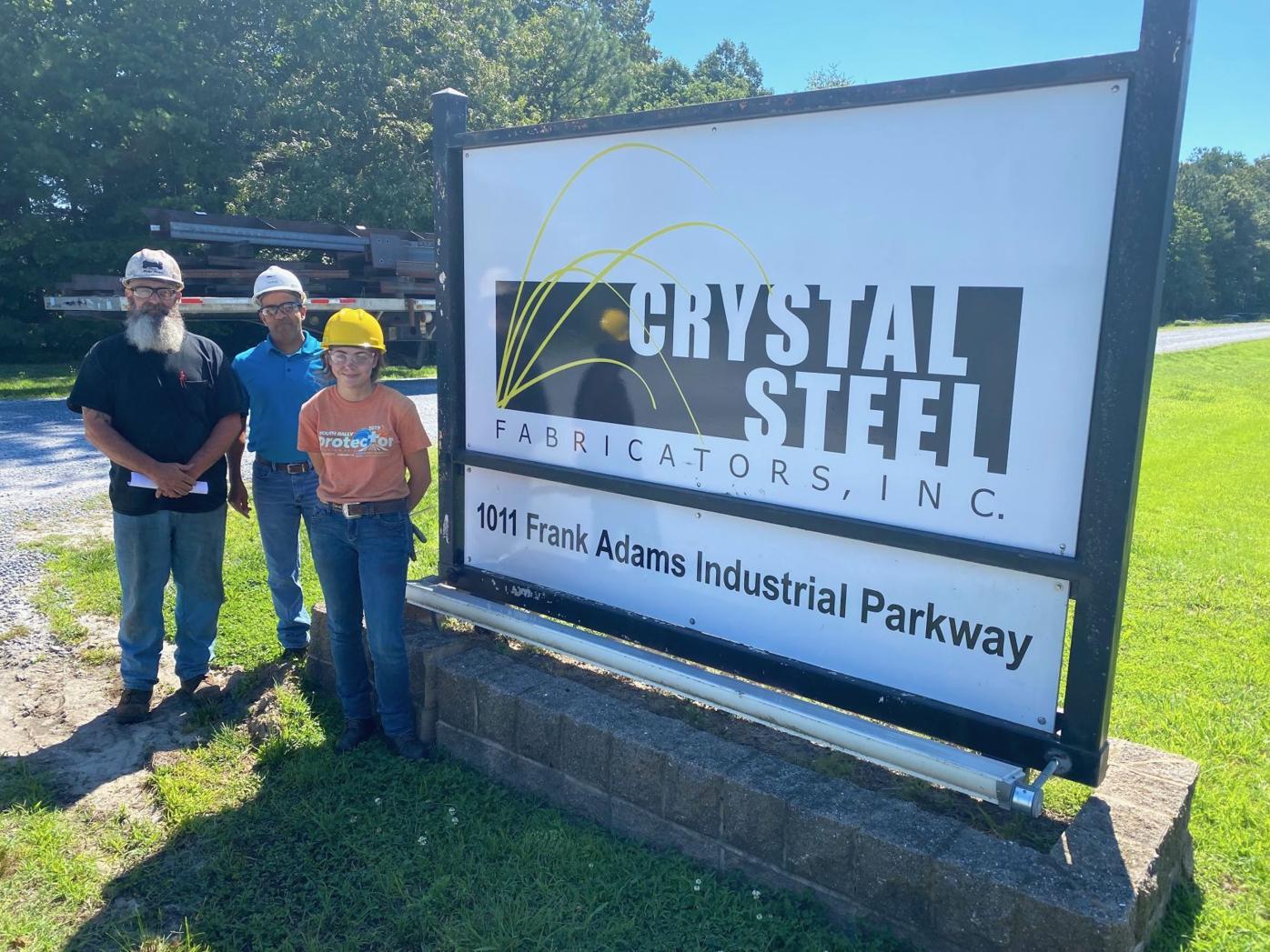 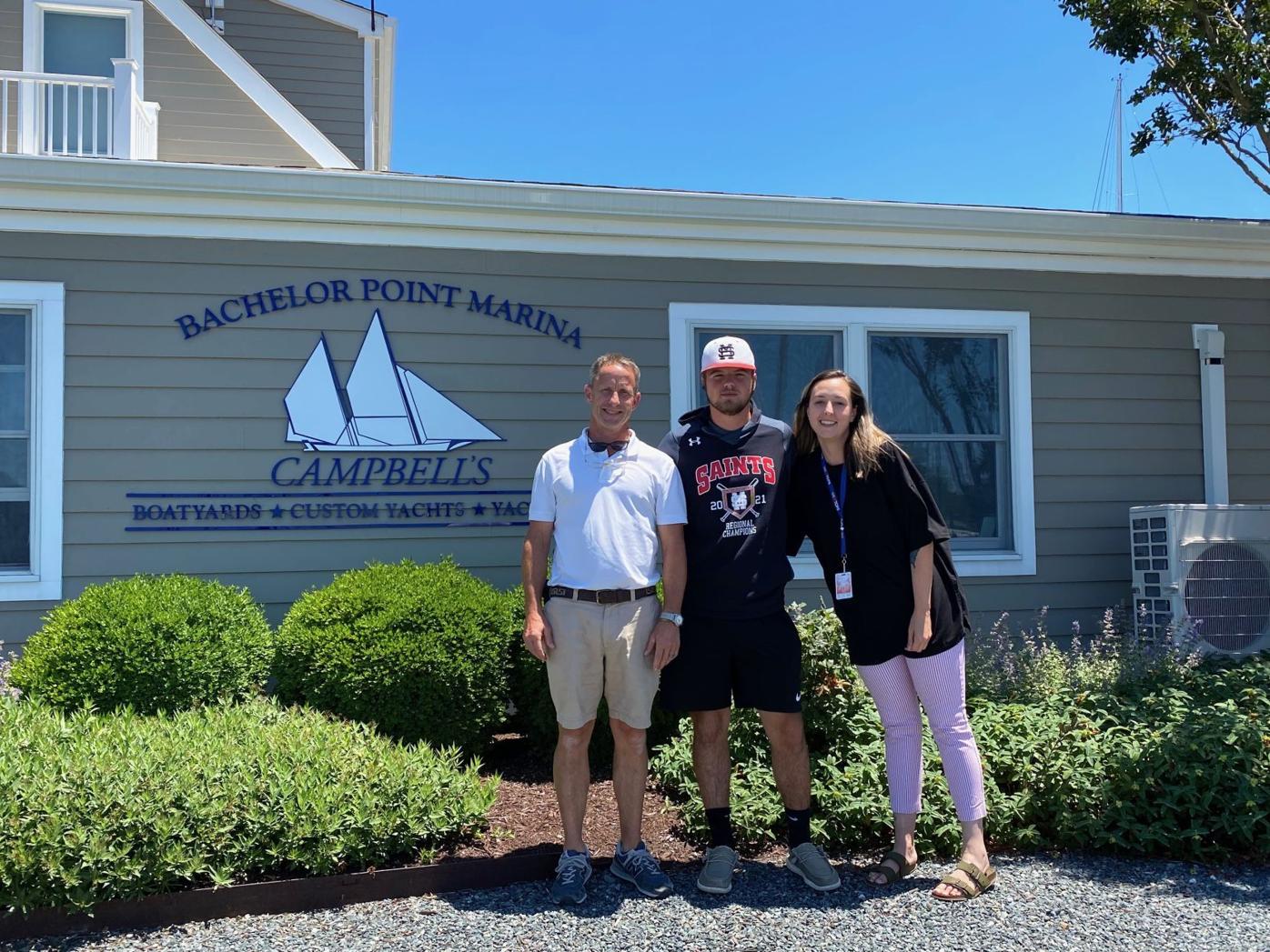 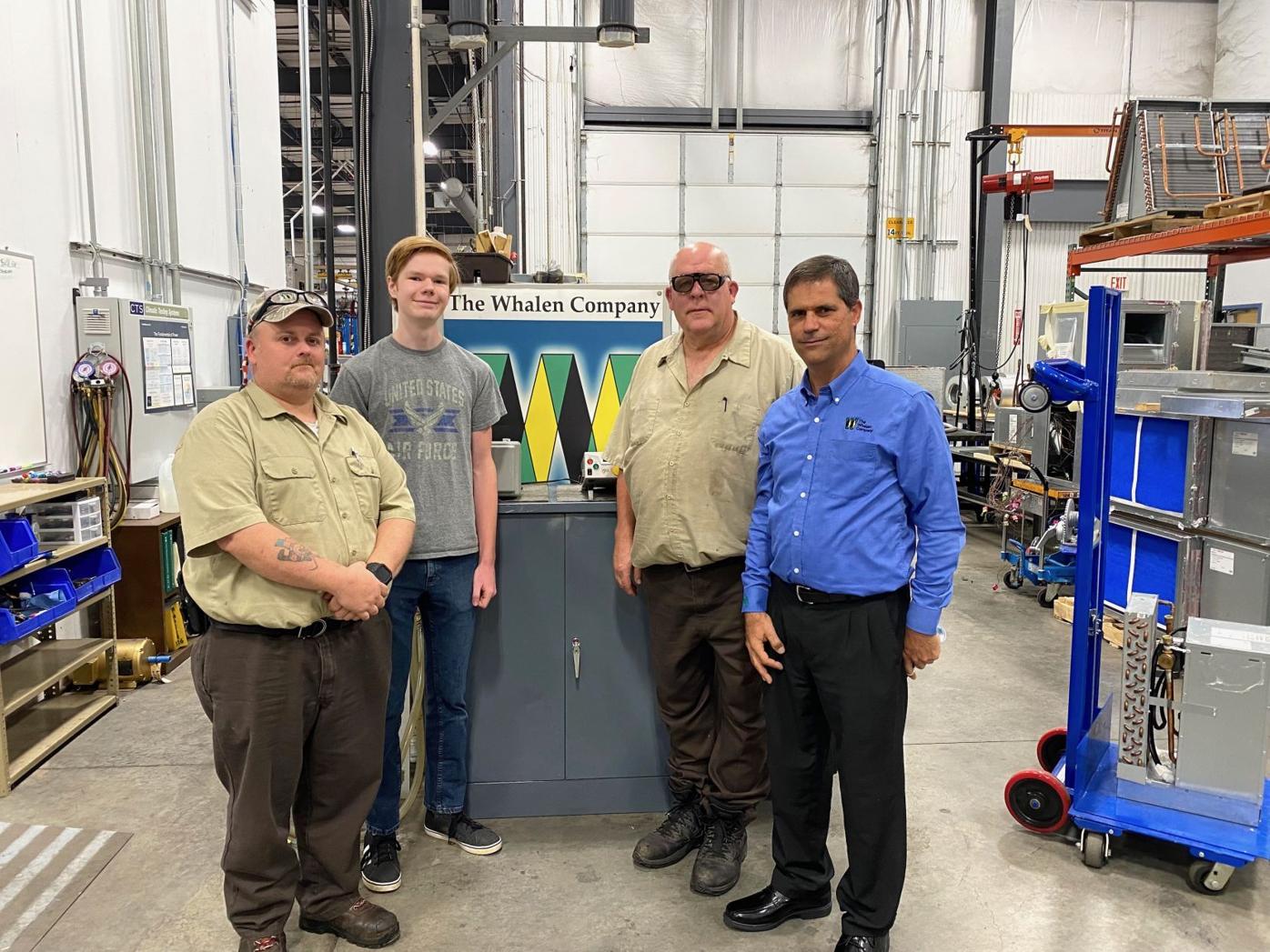 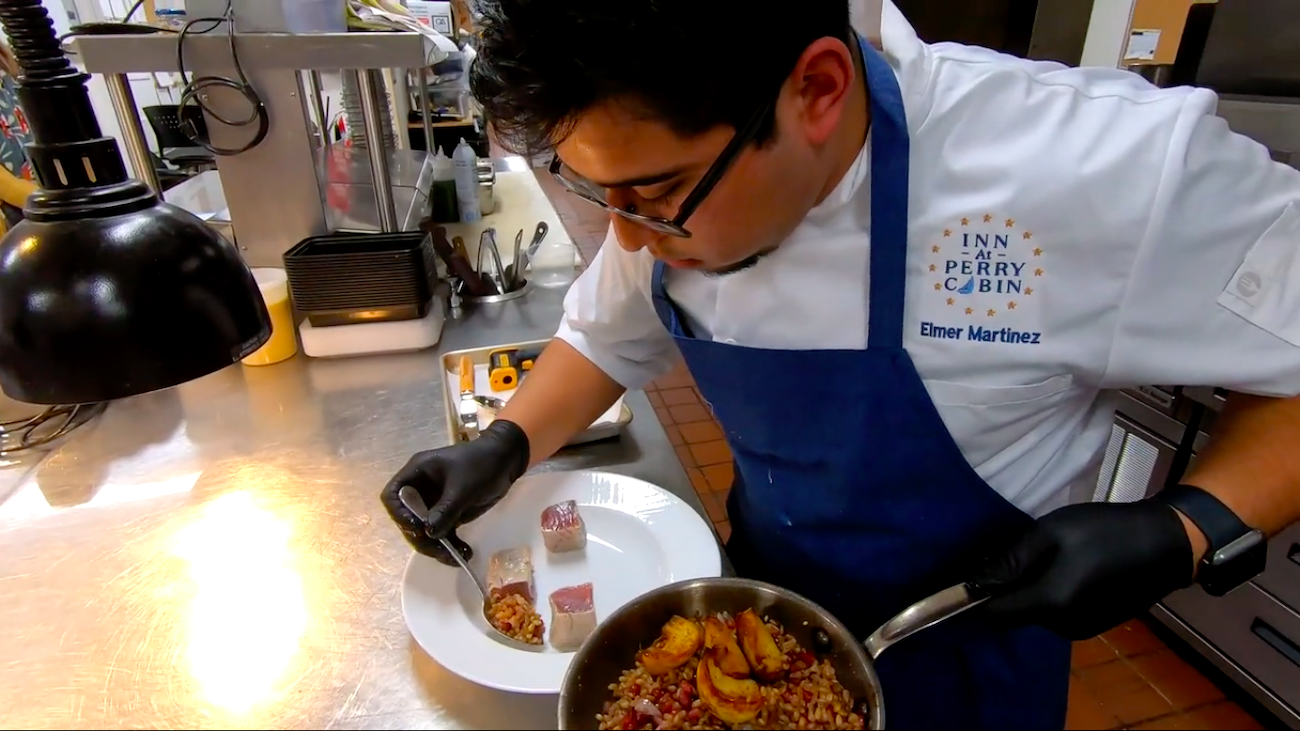 Elmer Melendez-Martinez graduated from Easton High School in both a Culinary Arts and the Youth Apprenticeship programs. He started his journey as a youth apprentice at Inn at Perry Cabin.

Daniel “Nate” Schultz graduated from both the carpentry and youth apprenticeship programs. He apprenticed at Campbell’s Boat Yards.

Elizabeth Wilburt works on a computer during her apprenticeship at Choptank Transportation in Preston.

Elmer Melendez-Martinez graduated from Easton High School in both a Culinary Arts and the Youth Apprenticeship programs. He started his journey as a youth apprentice at Inn at Perry Cabin.

What are employers to do? The solution to the frustrating and growing workforce problem could be the age-old worker-training model, apprenticeships. An answer that bridges the gap between students looking for experience and employers finding a future workforce.

This system, created during the depths of the Great Depression, is witnessing a renaissance, including in Talbot County.

Several business across the county is working with local high schools offering apprenticeship opportunities to students. Jodie Colombo, school-to-career facilitator with Talbot County Public Schools, said local industries willingness to participate in apprenticeships is key to the success of the program. Students have worked in fields ranging from culinary arts to welding.

The students work a minimum of 450 hours while receiving related educational training through their school and earning a wage.

One business, The Whalen Company, has hosted two apprentices at its Easton facility. Michael Colletti, vice president of engineering, describe the experience as “positive” for both the students and The Whalen Company.

An apprenticeship, Colletti believes, affords students an understanding of job opportunities. “When I was 17 years old, I didn’t know what i wanted to be. We expect kids to know what they want to be in high school,” he said. “Apprenticeships give them the knowledge of what’s available to them.”

For Whalen, the program provides the company with productive workers. Colletti is impressed by the quality of students applying to the company’s apprenticeship program. The students who apply to apprentice at the company are “very smart, eager to learn and catch on quickly.” He attributes those qualities to being surrounded by technology since youth.

Colletti explained students must interview for the apprenticeship opening. He explain it mirrors an actual job interview, with questions and a tour of the facility.

An number of factors make up the labor shortage, massive retirement rates, near zero growth in the working population, declining workforce participation and lack of interest in “blue collar” jobs has created an environment that “could easily develop into one of the worst labor shortages in 50 years,” wrote the Conference Board earlier this year.

Across the country, many businesses are re-examining a program started eight decades ago. In the late 1930s, the U.S. experienced a skilled workers shortage. Training programs created by unions and large corporation were disrupted by the Great Depression. In response, Congress passed the Fitzgerald Act, known better as the National Apprenticeship Act of 1937. The act established standards and responsibilities for apprenticeships, with the aim of ensuring that apprentice receive adequate training and real opportunity for advancement, according to Priscilla Murolo’s book “From the Folks Who Brought You the Weekend.”

Most states have created apprenticeship programs, both for high school students and people who already earned their diploma. Washington State has registered 20,000 apprentice. Alabama recently created the Office of Apprenticeship with the goal of 500,000 newly credentialed workers within four years.

“If the national government can get off the dime and modernize the National Apprenticeship Act, open up some new avenues for youth and pre-appreniceshp and create constructs that business, labor and educators can get behind, the time is opportune,” she told Governing magazine.

An email seeking information from the Maryland Apprenticeship and Training Program went unanswered.

Three recently graduates seniors from Talbot County High Schools have completed apprenticeships through the Maryland Youth Apprenticeship Program. Elizabeth Wilburt, a senior at Easton High School, completed the Computer Science and Youth Apprenticeship programs. Working at Choptank Transport in Preston, she was able to apply the industry skills she learned in the classroom to various tasks, including solving issues with equipment and software, setting up phone systems and servers, to auditing company permissions and security. Wilburt plans to attend a four-year college or university to study both Computer Science and Psychology.

lmer Melendez-Martinez graduated from Easton High School in a Culinary Arts Program and Youth Apprenticeship. Melendez-Martinez started his journey as a youth apprentice with the Inn at Perry Cabin right before the pandemic hit. He continued his apprenticeship throughout the summer and school year, working diligently in the kitchen to perfect his craft. According to his mentor and the human resources manager, Elmer is one of the best employees they have. After graduating, Elmer continued his career at Inn at Perry Cabin.

Daniel “Nate” Schultz graduated from St. Michaels Middle High School. He began his apprenticeship in the fall of 2019 with Campbell’s Boat Yards in Oxford. He had the opportunity to be mentored by multiple professionals in the boat carpentry field. During the pandemic, Schultz continued to work, as boating became a more popular pastime on the Eastern Shore. Nate graduated in the Carpentry and Youth Apprenticeship programs.

Campbell’s is a member of the Marine Trades Association of Maryland (MTAM), which regularly hosts on-the-job trainees through Maryland’s EARN Program. Through this partnership, Dyott will have the added benefit of an established on-the-job training program, a resource for advanced professional training, and a connection to the broader marine industry in Maryland.

“MTAM is always encouraged to see young people like Chandler embracing career opportunities in the boating industry,” says Lia Jaros, Workforce Development Coordinator. “We have seen an ever-increasing demand for new talent on an already tall order. We are excited to partner with Campbell’s Boat Yards and Youth Apprenticeship to offer Chandler every opportunity to succeed.”

Burgess has signed an agreement with The Whalen Company as a Lab Engineering Apprentice. A senior at Easton High, he is also pursuing the Career and Technology Education Project Lead The Way Engineering pathway.

Mikayla Hubbard, a senior at Easton High, signed a Youth Apprenticeship agreement with Crystal Steel Fabricators, Inc. in Federalsburg, where she will train as a welder. Hubbard has successfully completed the first two welding courses at Chesapeake College and is currently enrolled in the automotive CTE program. A provider of structural steel services, Crystal Steel, is ab AISC Certified MBE steel fabricator.