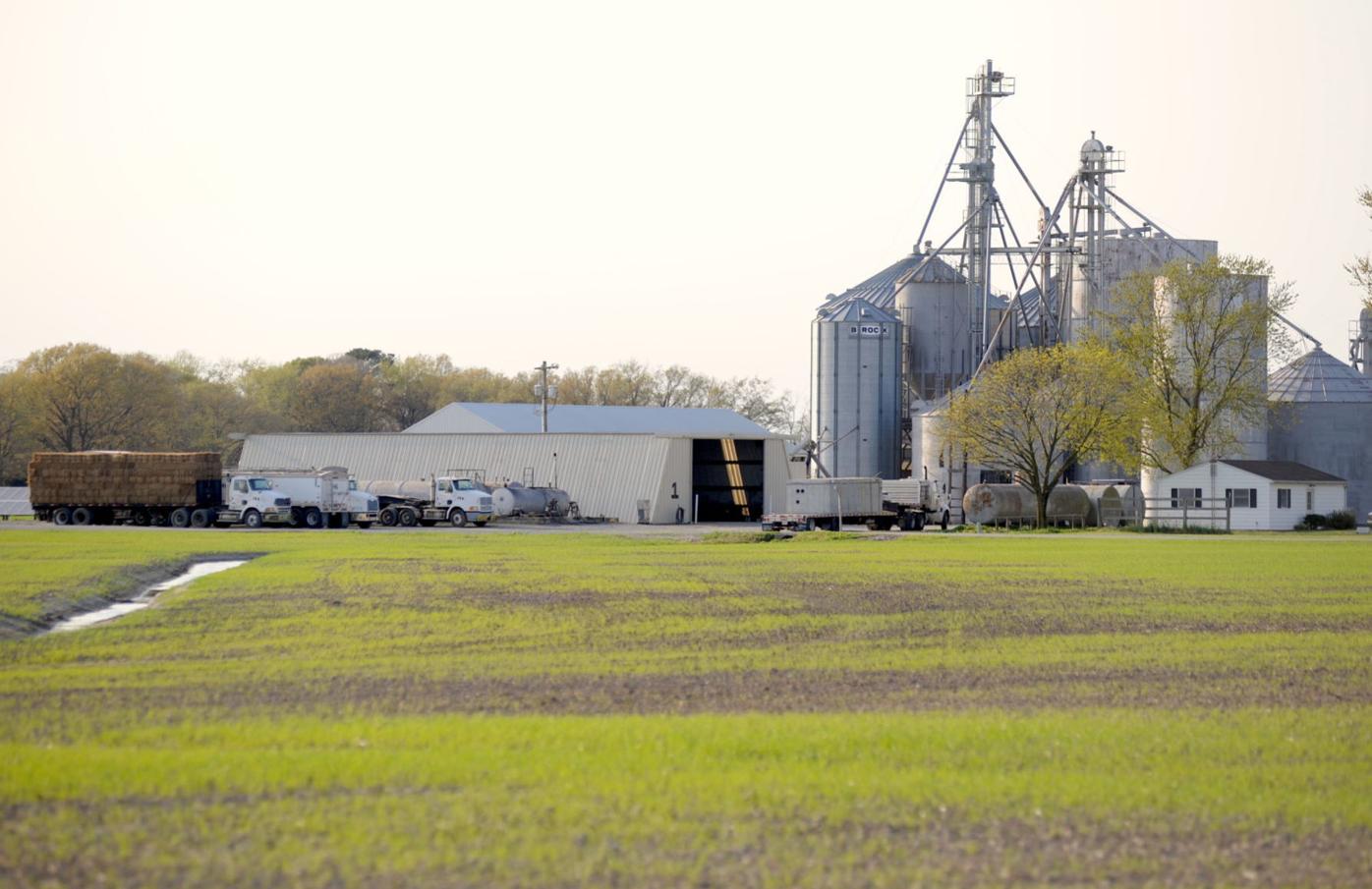 The Gannon Farm is next to the Easton Airport. The land off of route 50 going on to Chapel Road has been developed bringing them into the realm of commercial real estate. 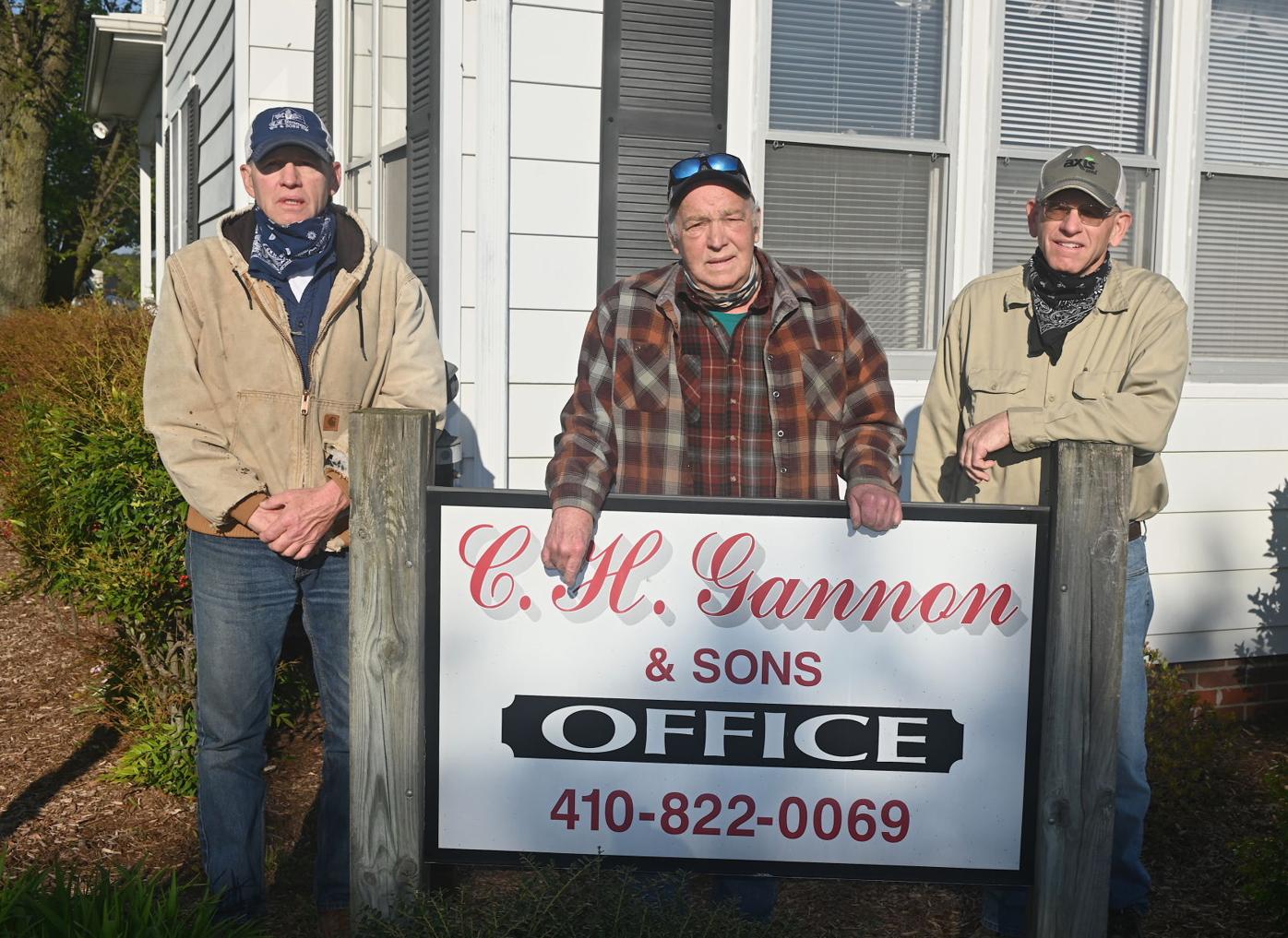 Greg, Glen and Gary Gannon work together as a team. They rise early and don’t take many days off. 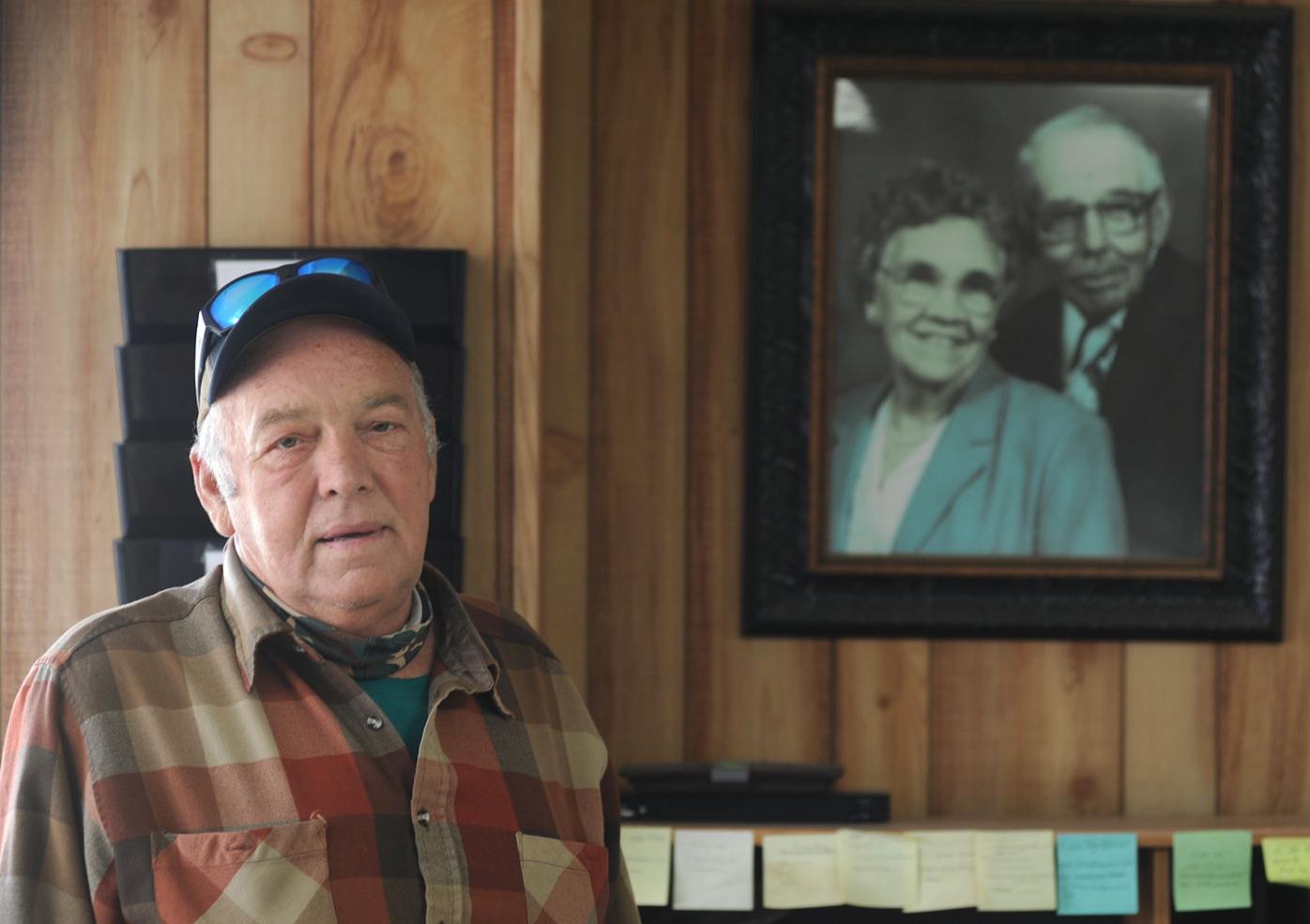 Glen Gannon’s grandparents, Henry and Edna, are on the wall in the office. They ran Gannon Farm as a dairy farm. Glen and his brothers will hand the farm off to the next generation. 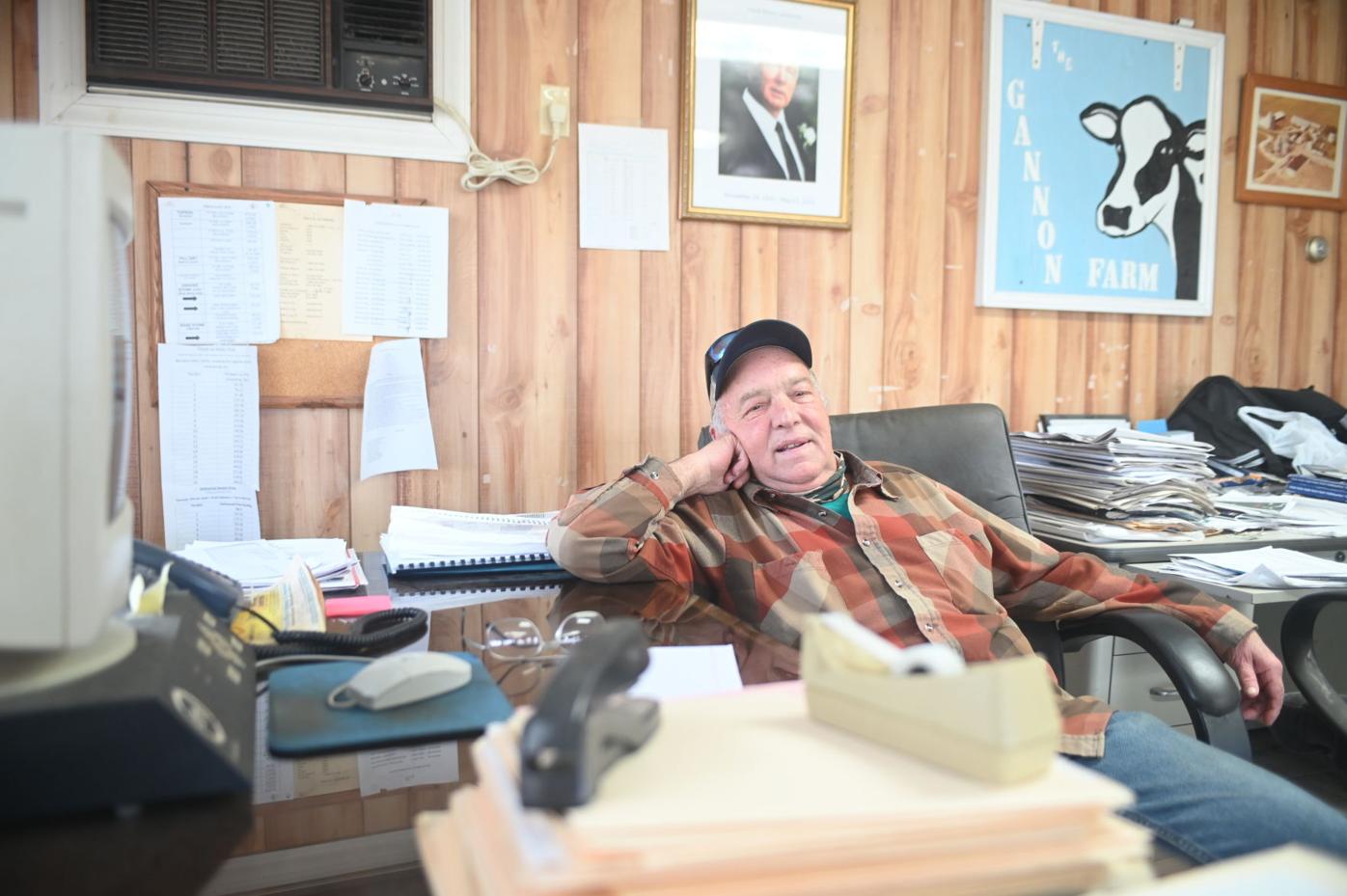 Glen Gannon sits in his office on 9706 Longwoods Road in Easton. It is near the Easton Airport. They run a lot of different ventures, from commercial real estate to feeding chickens to hauling big equipment, from this office.

The Gannon Farm is next to the Easton Airport. The land off of route 50 going on to Chapel Road has been developed bringing them into the realm of commercial real estate.

Greg, Glen and Gary Gannon work together as a team. They rise early and don’t take many days off.

Glen Gannon’s grandparents, Henry and Edna, are on the wall in the office. They ran Gannon Farm as a dairy farm. Glen and his brothers will hand the farm off to the next generation.

Glen Gannon sits in his office on 9706 Longwoods Road in Easton. It is near the Easton Airport. They run a lot of different ventures, from commercial real estate to feeding chickens to hauling big equipment, from this office.

EASTON — The Gannon Farm sits next to the Easton Airport on a sprawling 4,000 acres. While the farm does not raise chickens, the Delmarva Peninsula’s $3.4 billion serves as its lifeblood.

The Gannon Farm has been in Easton since before World War II. The farm is owned by brothers Glen, Greg and Gary Gannon, it was established by their grandparents — Henry and Edna Gannon

As you drive by you can see the many gray grain silos that reach into the sky. Those silos hold corn, wheat, and soybeans and speak to years of successful hard work by generations of the Gannon Family. Seeds, soil, rain, and sunshine.

“It is the lifeblood. There are no ifs ands or buts, if the poultry is gone, the agriculture is gone” he said.

He spoke about the chicken houses that dot the Delmarva Peninsula’s landscape in the hundreds. Feeding chickens is big business.

According to the Delmarva Chicken Association, In 2020 the Delmarva chicken community raised 570 million chickens, produced 4.2 billion pounds of shelf-and-table ready chicken. It generated $3.4 billion in value, billions of pounds of chickens. All that translates into jobs and extensive supply chains.

“We don’t have chickens ourselves but for those that do raise them, you’re the keeper of the chicks, they (Perdue) give you the chicks, they supply the feed, they tell you 100% what to do. They tell you how to grow them, either to six pounds a broiler or it goes on up to 10-12 pounds for a roaster,” he said.

“The whole integrated chicken industry came on in the 50’s and exploded in the 60’s”, he said. Feed makes the whole system hum.

“No matter how much corn we grow here up and down the shore, we will never have enough, we work on a deficit. There is corn that comes in from the west, the corn belt, all the time to off-set this deficit. We hold the corn in our silos as long as possible, they will pay a premium to hold it until January, February, March, and April”, he said.

Corn and wheat are all measured in bushels. A bushel of corn is 56 pounds, a bushel of wheat or soybeans is 60 pounds. He estimates the silos hold 250,000 bushels of feed corn which is about a third of their corn crop, and is about 14,000,000 pounds of feed.

Chicken feed is an international commodity.

Selling commodities is an art, you would not want to sell at the wrong time, Gannon said. “We take care of all the selling forward contracts and we hedge some on a commodities market,” he said.

“There are basic procedures that have to be achieved to make feed corn sellable. Corn has to be dry, so you want to pick it on a dry day. We put it through a dryer. Perfect is 15.5% amount of moisture content. If it is over 15.5 when you go to sell it you will get deducted because you are selling them water,” he said. “Anything in Easton has to be loaded up and taken to one of the feed grinding facilities. It’s a huge trickle down as far as the trucking industry and the labor industry.”

The chicken industry goes from Maryland down south to Virginia and North Carolina. Arkansas and Georgia also have a big chicken production. Tyson is one of the biggest producers, Perdue is in the top five.

The canning industry was huge in Caroline, Dorchester, and Talbot Counties during World War II. Something huge happened that killed the canning of vegetables. That behemoth was called California.

“California feeds the world. Canning is dead and gone”, he said.

The Gannons employ 13 workers year around and during the fall harvest they take on extra help. And they don’t just farm. Diversifying is smart business.

“We are into a lot of things. Farming is our core business. We are in trucking we move heavy equipment like excavators and bulldozers. We sell straw to landscapers here and on the Western Shore. And we sell hay, mulch, bagged corn, topsoil, fill-dirt and stone. We also lease ground out to several businesses,” he said.

The family has a long history in Talbot County.

“My grandparents lived right here in this very house. They were dairy farmers. My father was also in dairy for a long time. We sold out of dairy in 1970. My nephew Kyle lives in the original house that we were all raised in. My grandpa moved here when he was nine from Matthewstown. We have been here all our lives, he said. “My mother was chairman of the Delmarva Chicken Festival in the 1970’s. She got to meet the original Colonel Sanders of Kentucky Fried Chicken who came in as a speaker, this was a thrill in the 70’s for the Delmarva Chicken Association members,” he said.

One of the big items of interest to Delmarva Chicken Association is environmental regulation. And Gannon does not speak in generous terms of environmentalists, government regulators and some politicians.

“Agriculture in general is simply regulated to death and it just smothers us. It seems like the farmer gets blamed for everything that happens to the Chesapeake Bay”, Gannon said.

Gannon mentioned using Roundup Ready seeds made by Monsanto. These ingenious genetically modified corn seeds are resistant to the herbicide Roundup. So, when it’s time to kill the weeds, the farmer can apply herbicide and not have it hurt its corn. The U.S. Environmental Protection Agency says the active component in Roundup, Glyphosate, does not hurt adults, children or in-utero fetuses.

“We plant all GMO (genetically modified organisms). It’s the greatest thing since sunshine. You don’t have any corn earworm, no corn bore. If you go non GMO you have to spray it a number of times with an airplane and insecticides, you have worms in it if you don’t”, he said.

Aside from worms and bureaucrats, his biggest fear is traffic. He has to move his equipment up and down Route 50. “There is no doubt that traffic on the road hitting farm machinery up and down the road is getting worse all the time. It’s terribly dangerous. The heads on a combine are 35 to 40 feet wide. We take heads off the machine to try and break things down as small as possible, but still the machine itself is 22 feet wide, which makes it hard when there are people riding bicycles and mailboxes on a 24-foot road,” he said.

Between the cost of land, the astronomical cost of equipment ($225,000 for one planter) no one who didn’t grow up on a farm could just go into farming. Unless you are doing a smaller niche, organic farming, it is difficult to reach the scale to make it work. It is all just too expensive. And these guys work hard. It’s hard to tell if it is just a business or a calling, they were born into it. There is something very alluring about watching the sunrise from a tractor seat and watching your crops grow.

This farm is deeply integrated into our economy and our community’s eating habits. They grow the food that feeds the chickens. The farm has also provided an honest living for the generations of Gannon’s. Gary, Greg and Glen are the operators and owners of the farm. Bret and Kyle Gannon are the next generation who work on the farm as well.

In their office you will see their father’s portrait on the wall along with their grandparents. The continuity of generations is as evident as the seasons that dictate the crop rotations.