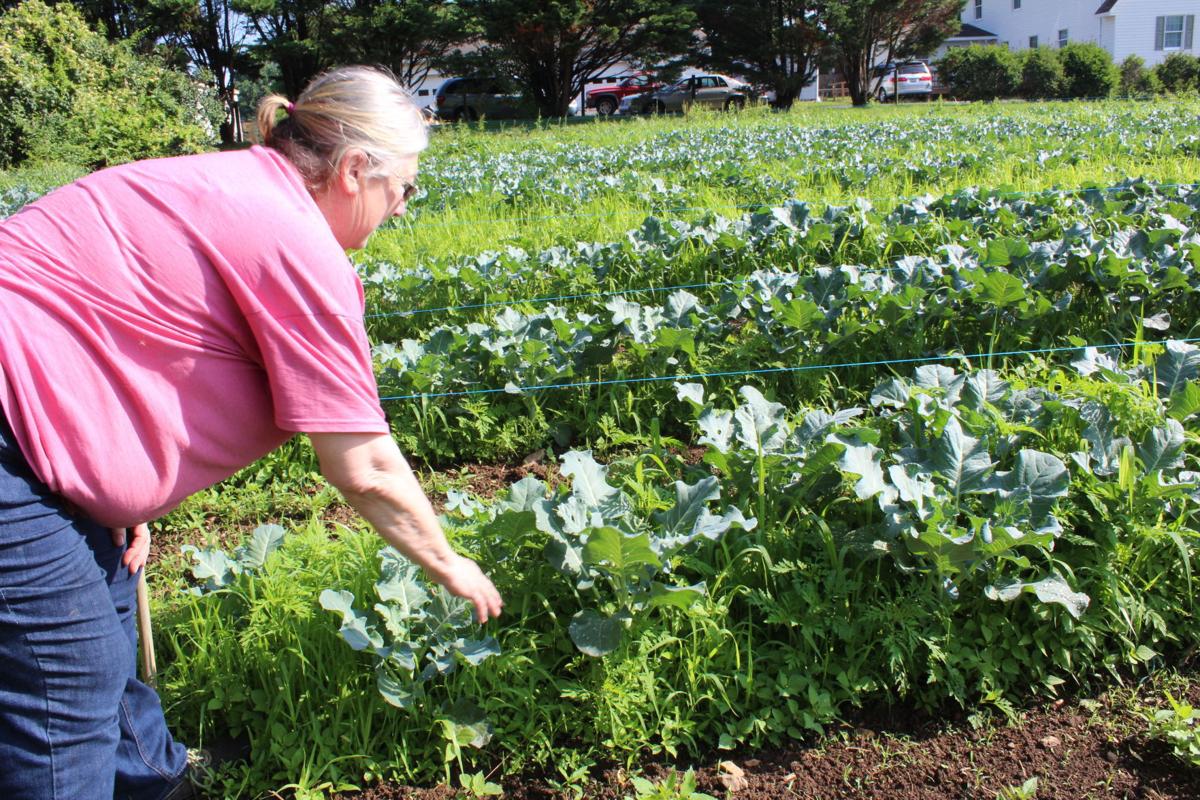 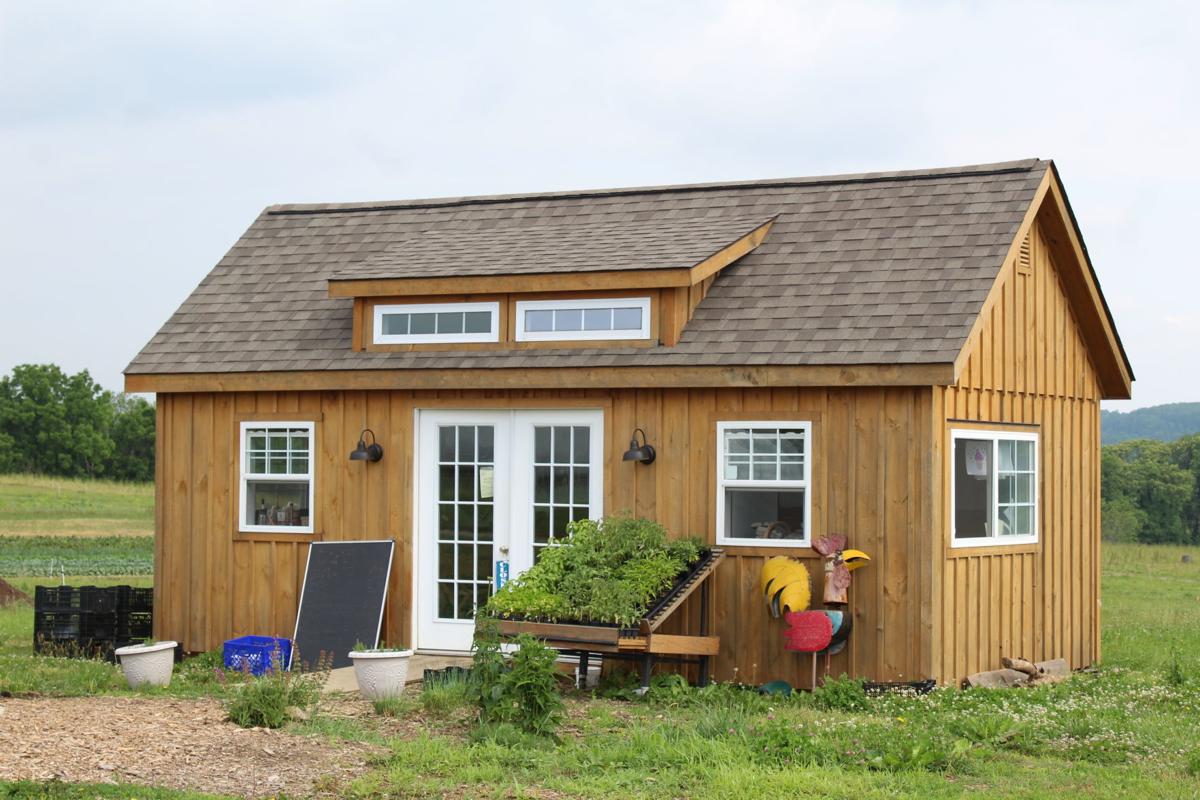 RISING SUN — Productive farming without the use of chemicals in pesticides and fertilizers also means locally grown vegetables and supporting a community business.

On a hill that overlooks U.S. Route 1 in Cecil County, Tom Paduano and Sarah Rider are farming in the organic method they learned together more than 10 years ago. Up the road in Calvert, Pam Stegall is celebrating her 25th year of organic farming at Calvert Farm on Chrome Road.

The husband-and-wife duo run Flying Plow Farm, 56 acres just outside the town of Rising Sun, raising chickens and beef cows and growing fruits, vegetables and herbs without the use of the chemicals employed by traditional operations and backyard gardeners.

Becoming a certified organic operation typically takes three years, during which changes are made in the type of seed used, the way the crops are tended, harvested, stored and distributed. Regulations avoid synthetic fertilizer, pesticides, antibiotics and food additives, as well as irradiation, use of sewage sludge and genetically modified seed. Owners are also required to keep detailed written records that can be audited and sites are subject to periodic inspections.

However, Rider said their operation began in raised beds under greenhouse control, so the organic certification came quicker.

While Flying Plow Farm is certified organic by the U.S. Department of Agriculture, that’s not the focus.

“It’s about buying local,” Rider said, noting the term “USDA Organic Certification” does not define them. “We feel there’s a lot more to our farm. Organic is just a way to guarantee we don’t spray.”

“We can grow really good food without it, so why not?” Rider said. “We don’t want pesticides in our foods. It’s a hazard for our kids and our workers.”

Organic farmers are limited to those materials made from renewable sources free from hormones and antibiotics.

Stegall had been certified organic but decided the federal seal was no longer important.

“The value was not there,” Stegall said, adding that she still farms her 25 acres near the Pennsylvania border using the same practices.

However, the cost of paying for the certification and time involved with inspections was prohibitive, she said.

“A burden has been placed on small farms,” Stegall said, noting that the rules are the same for all organic operations regardless of size. “I’m not selling organic snacks. Just vegetables.”

From her vantage point, Stegall believes the term “organic” is not as important as it once was.

“People are more interested in locally sustainable and chemical-free,” she said. “Organic is losing its edge.”

Rider agrees that term is sometimes a hindrance.

“I see people walk through a farmers market and see the organic sign and walk past. It’s a thing in people’s minds that organic is more expensive,” she said.

“If you’re going to buy organics from Florida or California, I’d rather see you buy locally,” he said, adding that a chain grocery store’s organics — like the traditionally grown produce — is picked ahead of maturity and forcibly ripened en route in the trucks. “And here you can talk to the farmers.”

Buying locally has another benefit. Whether your farm stand of choice is organic or not, Rider said the risk of contamination is lower and easier to trace should E. coli or listeria be found.

“We have 250 cantaloupes in a week,” Rider said, comparing that to hundreds of thousands in the larger conventional farms.

For those who don’t have the time to seek out these local farm stands or prefer to one-stop shop, grocery stores also make organic produce available. At Aldi, organic product sales have increased exponentially, according to Jeff Baehr, Aldi Frederick Division vice president.

“We’ve more than doubled our organic product offerings since they were first introduced and sales have nearly quadrupled. From the new organic meat options to fresh sliced fruit and more, our customers are saying we’re offering more of the products they want and love,” Baehr said.

For Flying Plow Farm and Calvert Farm, it’s also about knowing what their customers want. Both local farms run community sustained agriculture, or CSA, programs. This is a subscription-type program in which the public buys shares and receives weekly boxes of produce in season. Flying Plow’s CSA runs May to November, while Calvert Farm operates year-round.

And both also report they have problems getting and keeping reliable labor.

“This is the first year we’ve been able to get H2A workers from Mexico,” Rider said. “We’ve had apprenticeships and interns, which is fine. But it’s exhausting.”

Plus, once they have finished that program, they move on, Rider said. There have been good college workers too, but they have to leave in August, at the height of the harvest season, she noted.

With Maryland’s minimum wage approaching $15 an hour, she said it will be vital they have a skilled and productive workforce to protect their bottom line. Planting and weeding and picking is hard work and it’s not for everybody, she said.

Paduono and Rider met while managing CSAs in Pennsylvania. When they decided to start a farm of their own, the couple rented land in Harford County. When the search for land to purchase began, Rider said the focus was on Cecil County. They purchased the farm in 2013, which included a Civil War-era home that had only been modernized in the 1970s. She said customers to their farm stand ask to see the four-seater outhouse, which she reports was gone before they arrived.

It didn’t take much to move their organic operation to Charles Johnson Farm Lane. Starting with greenhouses, which grow off the ground in raised beds, Paduono said work began to plan what else to grow and where.

“You want to create a good soil situation ... improve the soil biology before you plant,” he said.

That includes where to put the cows and chickens out to pasture and rotating the 1-acre beds — planting in one patch this year, and then planting cover crops and letting it rest for a year.

“The cover crops stay for a whole season,” he said, noting that legumes are a good choice.

Eventually that gets mowed or tilled into the soil for the next season of planting. The land where the cows and chickens spent a season is also part of the dance card, with the pasture providing grass for the cows and insects for the chickens and both depositing fertilizer.

“It’s really regenerative for the eco-system,” he said. “We’re maintaining what we bought.”

At Aldi, for example, a recent spate of renovations and expansions in the region means more organic produce and prepared organic offerings, such as almond butter and salsa.

“For shoppers interested in buying organic, our organic products have an easy-to-spot ‘USDA organic’ seal on the packaging, and we guarantee they’re as good as or better than name brands,” Baehr said.

Likewise, Laura Jacobs said Martin’s and Giant stores offer as many as 200 organic items on its shelves.

“In produce there is an organic option in nearly every category,” said Jacobs, spokeswoman for the southeastern Pennsylvania-based chain.

Even though it’s a new concept for many, Jacobs said for grocers organic is established.

“I don’t believe organic produce is a trend that will fade. It’s been on an upward trajectory for at least the past decade, if not longer,” she said.

Although supply may be inconsistent at times, it’s not longstanding.

“More and more suppliers/farmers are converting at least a portion of their acreage to organic production. I believe this will translate to more products across the store,” she said.