Los Angeles County Fire Department vehicles sit at a medical call Friday, Jan. 7, 2022, in Inglewood, Calif. Occasionally, firefighters transport patients to the hospital in fire engines because of short staffing amid an explosion in omicron-fueled coronavirus infections at an ambulance company that the fire department contracts with.

Ambulances in Kansas speed toward hospitals then suddenly change direction because hospitals are full. Employee shortages in New York City cause delays in trash and subway services and diminish the ranks of firefighters and emergency workers. Airport officials shut down security checkpoints at the biggest terminal in Phoenix and schools across the nation struggle to find teachers for their classrooms.

The current explosion of omicron-fueled coronavirus infections in the U.S. is causing a breakdown in basic functions and services — the latest illustration of how COVID-19 keeps upending life more than two years into the pandemic.

“This really does, I think, remind everyone of when COVID-19 first appeared and there were such major disruptions across every part of our normal life,” said Tom Cotter, director of emergency response and preparedness at the global health nonprofit Project HOPE. “And the unfortunate reality is, there’s no way of predicting what will happen next until we get our vaccination numbers — globally — up.”

First responders, hospitals, schools and government agencies have employed an all-hands-on-deck approach to keep the public safe, but they are worried how much longer they can keep it up.

In Kansas’ Johnson County, paramedics are working 80 hours a week. Ambulances have frequently been forced to alter their course when the hospitals they’re heading to tell them they’re too overwhelmed to help, confusing the patients’ already anxious family members driving behind them. When the ambulances arrive at hospitals, some of their emergency patients end up in waiting rooms because there are no beds.

Dr. Steve Stites, chief medical officer for the University of Kansas Hospital, said when the leader of a rural hospital had no place to send its dialysis patients this week, the hospital’s staff consulted a textbook and “tried to put in some catheters and figure out how to do it.”

Medical facilities have been hit by a “double whammy,” he said. The number of COVID-19 patients at the University of Kansas Hospital rose from 40 on Dec. 1 to 139 on Friday. At the same time, more than 900 employees have been sickened with COVID-19 or are awaiting test results — 7% of the hospital’s 13,500-person workforce.

“What my hope is and what we’re going to cross our fingers around is that as it peaks ... maybe it’ll have the same rapid fall we saw in South Africa,” Stites said, referring to the swiftness with which the number of cases fell in that country. “We don’t know that. That’s just hope.”

The omicron variant spreads even more easily than other coronavirus strains, and has already become dominant in many countries. It also more readily infects those who have been vaccinated or had previously been infected by prior versions of the virus. However, early studies show omicron is less likely to cause severe illness than the previous delta variant, and vaccination and a booster still offer strong protection from serious illness, hospitalization and death.

Still, its easy transmissibility has led to skyrocketing cases in the U.S., which is affecting businesses, government offices and public services alike.

In downtown Boise, Idaho, customers were queued up outside a pharmacy before it opened Friday morning and before long, the line wound throughout the large drugstore. Pharmacies have been slammed by staffing shortages, either because employees are out sick or have left altogether.

Pharmacy technician Anecia Mascorro said that prior to the pandemic, the Sav-On Pharmacy where she works always had prescriptions ready for the next day. Now, it’s taking a lot longer to fill the hundreds of orders that are pouring in.

“The demand is crazy — everybody’s not getting their scripts fast enough so they keep transferring to us,” Mascorro said.

In Los Angeles, more than 800 police and fire personnel were sidelined because of the virus as of Thursday, causing slightly longer ambulance and fire response times.

In New York City, officials have had to delay or scale back trash and subway services because of a virus-fueled staffing hemorrhage. The Metropolitan Transportation Authority said about one-fifth of subway operators and conductors — 1,300 people — have been absent in recent days. Almost one-fourth of the city sanitation department’s workers were out sick Thursday, Sanitation Commissioner Edward Grayson said.

The city’s fire department also has adjusted for higher absences. Officials said Thursday that 28% of EMS workers were out sick, compared with about 8% to 10% on a normal day. Twice as many firefighters as usual were also absent.

In contrast, the police department saw its sick rate fall over the past week, officials said.

At Phoenix Sky Harbor International Airport, two checkpoints at the airport’s busiest terminal were shut down because not enough Transportation Security Administration agents showed up for work, according to statements from airport and TSA officials.

Meanwhile, schools from coast to coast tried to maintain in-person instruction despite massive teacher absences. In Chicago, a tense standoff between the school district and teachers union over remote learning and COVID-19 safety protocols led to classes being canceled over the past three days. In San Francisco, nearly 900 educators and aides called in sick Thursday.

In Hawaii, where public schools are under one statewide district, 1,600 teachers and staff were absent Wednesday because of illness or pre-arranged vacation or leave. The state’s teachers union criticized education officials for not better preparing for the ensuing void. Osa Tui Jr., head of the Hawaii State Teachers Association, said counselors and security guards were being pulled to go “babysit a classroom.”

“That is very inappropriate,” Tui said at a news conference. “To have this model where there are so many teachers out and for the department to say, ‘Send your kid’ to a classroom that doesn’t have a teacher, what’s the point of that?”

In New Haven, Connecticut, where hundreds of teachers have been out each day this week, administrators have helped to cover classrooms. Some teachers say they appreciate that, but that it can be confusing for students, adding to the physical and mental stress they’re already feeling because of the pandemic.

“We’ve already been tested so much. How much can the rubber band stretch here?” asked Leslie Blatteau, president of the New Haven Federation of Teachers.

Cats like Ninja will be benefiting from Talbot Humane’s planned expansion. With new enclosures and more natural light, the improved facilities will be more comfortable for shelter animals and more inviting to potential adopters.

Dogs like Nyla will benefit from Talbot Humane’s planned expansion. With additional green space and expanded medical facilities, shelter animals will have more room to play and top-of-the-line care.

EASTON — 2021 was a significant year for Talbot Humane, a nonprofit that has served the Mid-Shore since 1932. The organization works to ensure the well-being of animals and meet the needs of the community in a variety of ways, from offering spay/neuter assistance and carefully considered adoptions to crafting legislation to improve animal welfare and micro-chipping pets. In November, the shelter acquired land and a building next to its existing premises. The real estate was purchased directly from Saints Peter and Paul Church.

“A much-needed updating and expansion of our facility was something we had been considering for a while, but it hadn’t made it past the back burner,” said Patty Crankshaw-Quimby, Talbot Humane’s executive director. “We were happily surprised by the opportunity that literally fell into our laps. It was the proverbial ‘offer you can’t refuse.’ Saint Peter and Paul approached us to ask if we had any interest in acquiring the real estate. The answer was a resounding ‘yes!’”

The updated and enlarged shelter will be used to enhance Talbot Humane’s efforts on behalf of the animals in their care and beyond. The organization hopes to expand access to its services for members in the community — and perhaps even beyond Talbot County.

“Animals in need know nothing of geographic boundaries,” Crankshaw-Quimby said.

With the land and building now in our possession, we have entered the planning phase of what will be a years-long effort. Early “wish list” brainstorming has already begun.

“A facility with plenty of natural light is key,” Patty said, explaining that this cuts down on the animals’ stress level. Animals flourish when they get a sense of daylight, she said. “Their comfort will be considered at every turn.” She explains that enclosures will no longer be “cages” and chain-link. Well-maintained green spaces will punctuate the campus, offering great play spaces for the animals. Medical facilities will be expanded. Also intended to benefit from the up-to-date shelter will be staffers, volunteers and the public. Colorful, inviting areas for potential adopters to spend time with the animals will be paramount, Crankshaw-Quimby said. Plans will be drawn up with an eye toward maximum efficiency, sustainability and use of technology.

“2022 marks Talbot Humane’s 90th anniversary,” said Talbot Humane Board of Directors President Bridget Horner. “We are thrilled to be entering this banner new year with such a groundbreaking project.”

EASTON — Just days after the first winter storm of the year brought nearly 1 foot of snow to the Mid-Shore, a second storm dropped several more inches of snow on Friday.

The storm swept through the area late Thursday night into early Friday morning, just in time to cause hazardous roads for the morning commute. Cold, blustery conditions continued throughout the day Friday and into Saturday.

In Talbot County, Easton picked up just over 3 inches of snow, Trappe recorded just over 2 inches and St. Michaels recorded under an inch, according to official snowfall reports from the National Weather Service.

Due to the weather, Talbot, Caroline, Queen Anne’s and Dorchester counties all elected to close schools Friday.

Power outages across the region were minimal, with just under 200 customers affected.

Looking ahead, rain is expected Sunday afternoon into the evening, with temperatures in the mid-40s dropping to around freezing early Monday morning. More cold, blustery conditions are expected across the region Monday and Tuesday, with Monday’s highs predicted to hit just above freezing and Tuesday’s temperatures predicted to top out in the upper 20s.

• Avoid traveling until snow resides and roads are cleared. Don’t crowd the plows.

• Keep your devices charged and only use generators outdoors and never in a garage should you lose power.

• If you go outside, dress in warm clothes and layers.

• Use rock salt to melt ice on walkways.

• When shoveling snow, stay hydrated and push the snow aside, don’t lift.

• Check on your neighbors. 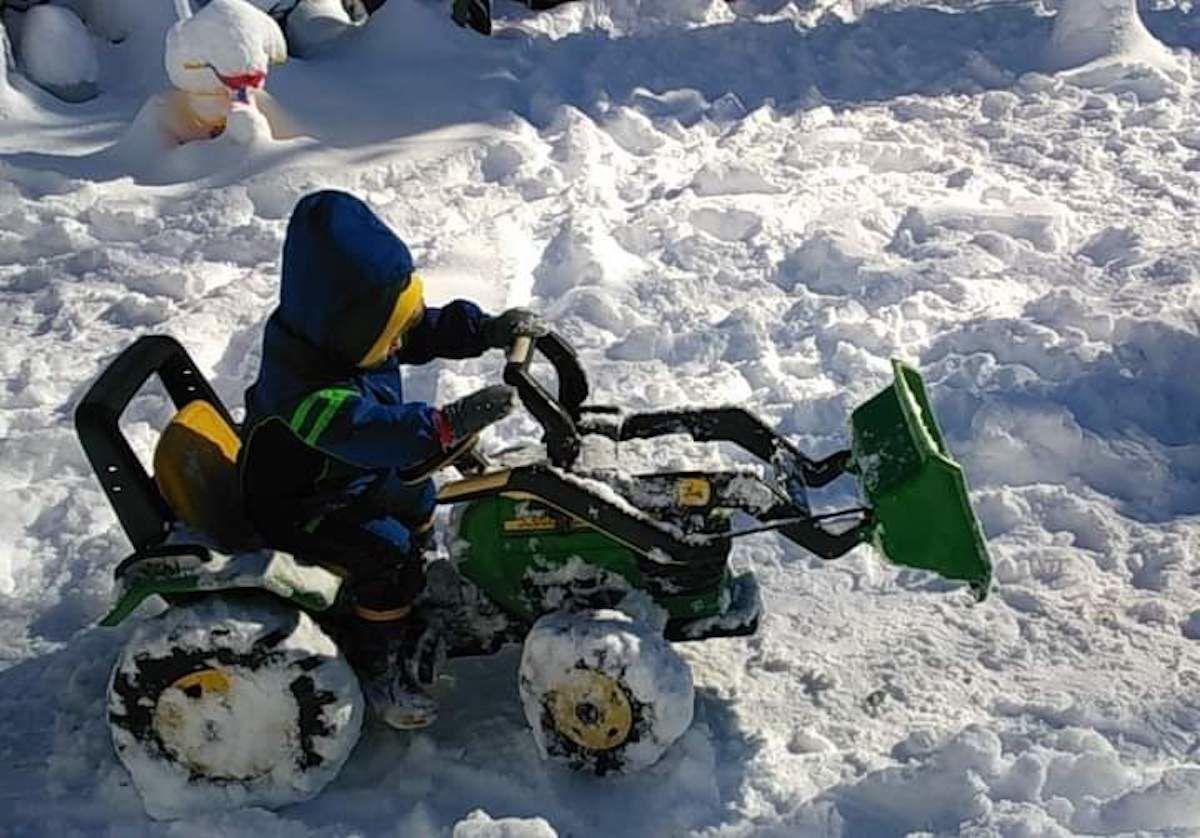 Caleb Lednum of Federalsburg drives his toy John Deere tractor through the snow during the first snowfall of 2022. The Eastern Shore was blanketed with snow on Monday, with more than 11 inches falling in parts of Caroline, Talbot and Dorchester counties. Caleb used the bucket on his front-loader to plow snow at home, while emergency service crews worked hard to clear the main roads.