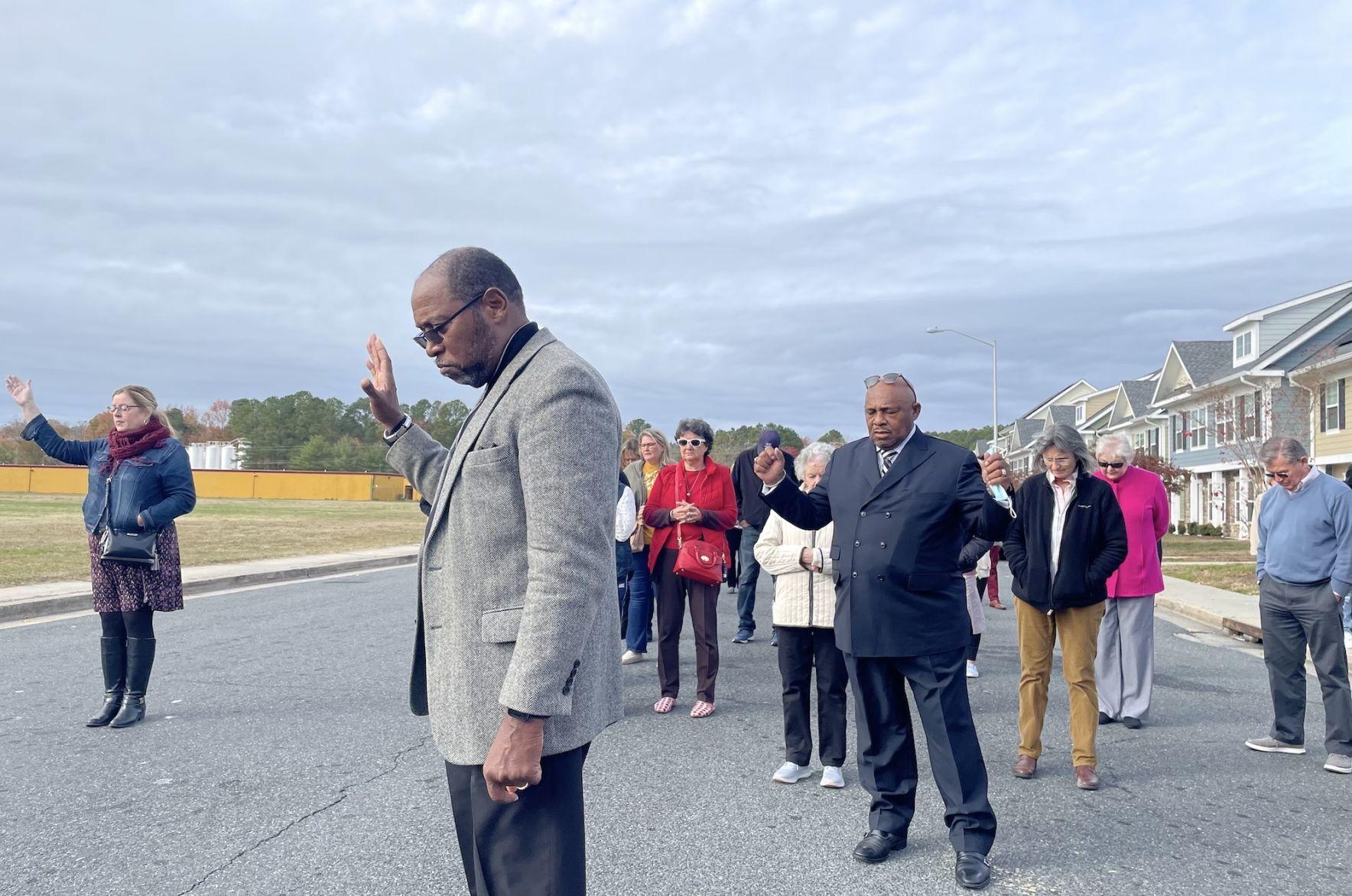 Participants on a Peace Walk pause for a word of prayer on Cosby Avenue.

Capt. Phip’s Seafood Inc. of Secretary has been sentenced, fined for visa fraud.

Hollander sentenced Capt. Phip’s Seafood Inc. to three years probation and to pay a $240,000 fine for visa fraud related to the employment of temporary workers employed at Harrington companies. In addition, Hollander ordered Harrington and Captain Phip’s seafood to participate in a verification program for their employees and were debarred from participating in the H-2B visa program. The fines were paid Tuesday.

Philip J. Harrington Jr. was Capt. Phip’s owner, president and sole director until his death on Feb. 13, 2018. Since March 6, 2019, Capt. Phip’s has been owned and operated by Philip Harrington’s, son, Jamie Harrington. The primary business of Capt. Phip’s is the production and distribution of ice as well as the processing of seafood. For more than a decade, Capt. Phip’s has participated in the H-2B work visa program through which it has obtained temporary foreign workers to fill seasonal positions.

According to the company’s guilty plea, from 2013 through 2018, Captain Phip’s Seafood Inc. routinely sought prevailing wage determinations for multiple job descriptions, and then filed petitions for H-2B visas for only the jobs with the lowest prevailing wage, regardless of the actual work duties of the employees. The H-2B Visa Program is a temporary non-agricultural worker program in which an employer may seek temporary authorization for foreign workers to legally enter and work in the U.S. To obtain an H-2B Visa, the U.S. Department of Labor must ensure the positions have been advertised to U.S.-based workers and assign the appropriate wage to be paid (“prevailing wage”) based on the job description.

As stated in the company’s plea agreement, on Aug. 31, 2017, a USCIS officer and government agents conducted a site visit at Capt. Phip’s location in Secretary. At that time, Capt. Phip’s H-2B workers were authorized only to engage in oyster production work. During the site visit, three H-2B visa beneficiaries were interviewed through an interpreter and indicated that their current duties involved ice packing duties rather than oyster production work.

During the Aug. 31, 2017 interview, Jaime Harrington said he was also the president of Easton Ice Company Inc. (“Easton Ice”). The principal office for Easton Ice is the same physical address as Capt. Phip’s premises in Secretary. A subsequent interview of a recipient of multiple H-2B visas filed by Capt. Phip’s including in 2017, when the H-2B workers were only authorized for oyster processing, revealed that their duties that season were to drive a truck and deliver ice. In September 2017, an agent observed this person driving a truck bearing the name “Easton Ice.” The agent also saw another Capt. Phip’s H-2B recipient delivering ice and riding in the truck. Easton Ice did not apply for H-2B visas in 2017, and workers with H-2B visas obtained through Capt. Phip’s were not authorized to work for Easton Ice Company. Jamie Harrington admitted Capt. Phip’s H-2B visa recipients were routinely directed to perform work for Easton Ice and other businesses controlled by Philip and Jamie Harrington.

On Aug. 9, 2018, government agents interviewed Jamie Harrington at Capt. Phip’s premises in Secretary. Jamie Harrington admitted the company was not in compliance with the requirements of the H-2B visa program and that some of Capt. Phip’s H-2B workers were driving trucks or performing other duties outside the scope of their visas, including performing work for other companies controlled by Philip and Jamie Harrington, including Easton Ice, Woodfield Ice Company Inc. (“Woodfield Ice”), as well as two Ocean City, Maryland, motels owned by members of the Harrington family. Agents pointed out to Jamie Harrington that if the H-2B applications had been truthful about the location and job duties for workers at Woodfield Ice the prevailing wage would have been much higher because that business is in the Washington, D.C., metro area.

Roughly between 2013 and 2018, Capt. Phip’s filed petitions for H-2B visas for approximately 142 nonimmigrant workers. Capt. Phip’s officers involved in the H-2B process were aware the nonimmigrant workers were intended to be employed to engage in work beyond the job descriptions authorized by the workers’ visas. Capt. Phip’s realized unlawful benefits through the use of fraudulently low prevailing wages between April 2013 to December 2018, although the exact amount cannot be determined, the Justice Dept. said. Capt. Phip’s has not participated in the H-2B visa program since at least January 2019.

Harrington admitted in his plea agreement that, beginning in 2013 and continuing through at least August 9, 2018, he engaged in a pattern and practice of hiring and employing workers without lawful immigration status at the Harrington Companies. Most of the unauthorized workers were Mexican citizens and nationals. Some of the undocumented workers Jamie Harrington hired and employed entered the United States lawfully and overstayed their visas, others never had lawful status to be in the U.S. Analysis of payroll and other records shows about 89 undocumented workers were employed by the Harrington Companies between 2013 and 2018. Harrington continued to employ several of the workers even after he knew they had been placed into removal proceedings by immigration officials because they did not have lawful status to be present or working in the U.S.

United States Attorney Erek L. Barron commended HSI, DSS and DOL-OIG for their work in the investigation and thanked the Baltimore District Office of the U.S. Department of Labor’s Wage and Hour Division for its assistance. Assistant U.S. Attorney Judson T. Mihok prosecuted the case.

The Confederate statue will be moved.

EASTON — The Talbot County Council voted unanimously Tuesday night to approve a motion awarding a contract to remove and relocate the Talbot Boys monument to Virginia, along with a provision giving flexibility to the council to review alternative local sites for the statue.

The vote followed over 35 minutes of heated debate between the council members, which primarily centered on requesting flexibility for the council to review possible alternative locations for the monument in Talbot County.

Strife surrounding the removal and relocation began after Council Member Frank Divilio’s Sept. 14 administrative resolution to remove the Talbot Boys statue from the county courthouse lawn passed 3-2, with only Council President Chuck Callahan and Council Member Laura Price holding out. After the measure passed, the county issued a request for proposals for the monument’s relocation. Stratified, Inc., a Washington-based firm, was the sole bidder for the RFP.

During the Nov. 23 meeting, county manager Clay Stamp requested to award the bid to Stratified for $67,000 — an amount that’s contingent on the project being fully funded by the Mid-Shore Community Foundation — to relocate the statue to the Cross Keys Battlefield in Harrisonburg, Virginia. No county funds are required for the bid.

Just after Callahan opened the floor for discussion on the award, Council Member Corey Pack immediately moved to award the bid to Stratified before the council discussion could begin — a move that Price strongly disagreed with after similar previous instances, saying she wanted to discuss flexibility and local possibilities. Divilio seconded Pack’s motion.

“There are people who would like it to stay in the county, and that needs to be given an opportunity,” Price said.

Council Vice President Pete Lesher motioned to amend the original motion, asking that County Manager Clay Stamp be granted the flexibility to present acceptable alternative locations to the council until Dec. 6 so that they can be reviewed by the council prior to the Dec. 14 meeting.

If alternate locations aren’t submitted to the county by Dec. 6, the proposal will move forward with the original plan to relocate the monument from the courthouse lawn to the Cross Keys Battlefield. The amendment will not delay removal of the statue, which is scheduled to take place in January.

Price said she would be willing to support Lesher’s amendment.

Divilio stated that he wasn’t interested in extending the deadline, saying that a later deadline wouldn’t make anyone with reservations about coming forward to share local alternate locations come forward any faster.

“I’m disappointed in the two that came in after the deadline,” Divilio said. “I feel that it was a bit disingenuous when individuals (said) there are locations and people that would take it without giving thought to their neighbors, their homeowners’ associations and the idea of it being in a private place with public accessibility at all times.”

Price said that none of the council members wanted the monument to go to Virginia except for Divilio — a statement he refuted immediately, saying he didn’t want it to go, but had “yet to find anything better.” Price responded by saying to give locals a few weeks to come forward with other possibilities.

“There are a lot of advantages to the location that Mr. Divilio has identified, and that is why I’m ready to support this,” Lesher said. “I’m going to explore alternatives, but right now I’m skeptical that there’s one that will exceed the advantages of the one that is on the table.”

A vote for Lesher’s amendment to the motion initially failed 2-3, with only Price supporting him. However, Callahan clarified his position and changed his vote, prompting the passage of the amendment.

The council then unanimously voted to approve the amended motion, which awarded the bid to Stratified and provided flexibility for review of additional proposals for alternative locations. Proposals are due by Dec. 6 and will be considered at the Dec. 14 council meeting.

Susan lost both her husband Frank and her job to COVID-19 in the past year. Their two teenage sons are still in school.

Susan is trying to make ends meet with Social Security, some cash assistance and food stamps. After she pays the bills, there’s nothing left. This will be their first Christmas without Frank.

Manny and Eric need clothes and shoes — a few presents would be nice.

A donation to the Brighter Christmas Fund could help brighten this family’s holiday.

The Brighter Christmas Fund is a 501(c)(3) charity, and tax-deductible donations, which also help other families in need on the Mid-Shore, may be sent to The Brighter Christmas Fund, c/o The Star Democrat, P.O. Box 600, Easton, MD 21601. Donations also may be made online via credit card or Paypal at www.brighterchristmasfund.org. Click the “Donate” button. For more information about the Fund, call 410-200-1884.

Those sharing the spirit of giving with others this holiday include:

Jerry B. and Jacqueline H. Smith