EASTON — An Easton man was found guilty Tuesday of aggravated animal cruelty in connection to the brutal beating of a puppy last October.

Although his two-day jury trial started just before noon Tuesday, Barnard Clayton Jr., 32, chose to waive his right to a trial and enter a plea deal by mid-afternoon.

Talbot Circuit Judge Stephen Kehoe later found Clayton guilty of aggravated animal cruelty, along with second-degree assault and resisting arrest relating to incidents while he was transported to the county detention center.

The case against Clayton stemmed from an anonymous 911 call reporting that a person had just killed a dog in the street in Easton on Oct. 15, 2021.

Officers from the Easton Police Department had initially been dispatched to the area of Talbot Lane and Higgins Street around 10:30 p.m. to respond to a report of two men arguing in the street. The officers saw the two men had separated and cleared the call.

As one responding officer drove away, he reported observing a man later identified as Clayton appearing to punch something in the road. When he drove closer to the man, the officer reported that Clayton saw him, started walking toward his own car and then placed a white dog in the back of the car.

The anonymous 911 call reporting the incident involving the dog came in shortly after the previous call, and officers came back to the area to search for the dog.

Officers noticed that a light in Clayton’s car was on and saw a brown dog on the floor that was alive. The officer also noticed blood on a white box in the car and on the rear door where they saw Clayton put the dog in earlier.

Officers then placed Clayton under arrest for striking the puppy. In police body camera footage of the arrest, Clayton did admit to hitting and disciplining the dog, said prosecutor Chelsea Endzel.

Both dogs were transported to All Pets in St. Michaels for treatment.

If the trial had continued, the treating veterinarian would have testified to the severity of the dog’s injuries, which included blunt force trauma around the dog’s eye, multiple fractures and contusions, she added.

Following the disposition, Endzel recommended suspending sentences and giving Clayton credit for time served in jail over the last 11 months, along with five years of supervised probation with special conditions relating to animals.

Endzel described the beating as a “horrific assault” on an innocent puppy, and pointed out that the puppy likely would have died if she had been laying on the street for much longer.

The puppy, now just over a year old, fully recovered from her injuries and is doing well, Endzel added.

Clayton’s defense attorney Larry Rogers asked the court to follow the state’s recommendation on sentencing, saying that the person seen on police body camera footage from that night and the person standing in court were two different people due to the influence of substance abuse.

“Mr. Clayton does have something to offer to society,” Rogers said, adding that he wasn’t going to make excuses and that Clayton understood the gravity of the situation.

Clayton was “out of his mind” with drugs and alcohol, and he’s a sick person who needs help, he continued.

Clayton spoke briefly, asking for a chance to get back into the community and to be with his family again.

Kehoe followed the state’s recommendation in sentencing, handing down suspended sentences, credit for time served and a five-year supervised probation. As part of the probation’s special conditions, Clayton will not be allowed to care for animals or live with animals.

He must also submit to mental health treatment and pay court costs and restitution for the dog’s veterinary treatment.

Kehoe emphasized the importance of mental health treatment for Clayton moving forward, saying that once he does treatment and clearly sees and deals with the obstacles facing him, he’ll be in a much better place. 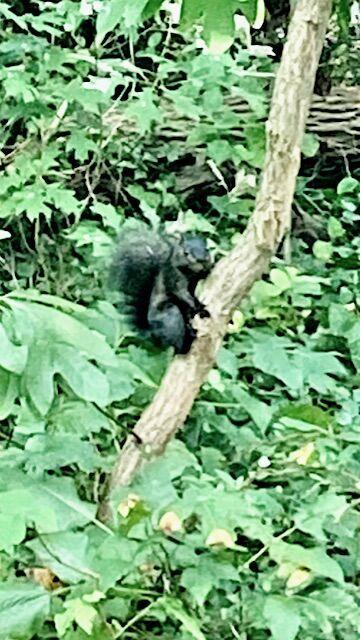 Reader Peter Bascom saw this black squirrel Friday while walking on the Rails to Trails in Easton and snapped a photo of it.

This offer is currently unavailable.