Impossible Dream, a 58-foot catamaran, sits in a slip in the Annapolis Harbor. The boat is completely wheelchair accessible.

Rob Klein, a four-year guest crew member of Impossible Dream, poses for a photo on the racetrack ramp at sunset.

Captain Will Rey (center) poses for a photo with guests while cruising around the Annapolis Harbor. The guests on this voyage were sailors from CRAB, an accessible sailing organization in Annapolis.

Special seats at the helm of Impossible Dream are mounted on a track for easy access to all of the boat’s instruments and steering controls.

Rob Klein, a four-year guest crew member of Impossible Dream, poses for a photo on the racetrack ramp.

ANNAPOLIS — For many with disabilities, getting on a boat and sailing on the open waters of the Atlantic Ocean seems like an inconceivable idea. However, a 58-foot catamaran — aptly named Impossible Dream — brings experiencing the joy of sailing to life for individuals with disabilities.

Since 2015, the universally accessible catamaran has been sailing up and down the east coast of the U.S., making stops in over a dozen major ports each summer to provide free sailing trips to individuals of varying levels of disability.

This summer, Impossible Dream made sailing while disabled a reality in Maryland, making stops in Annapolis and Baltimore. Last month, the crew hosted sailors from Chesapeake Region Accessible Boating (CRAB) to watch a regatta in the harbor of Annapolis. The boat’s second stop in Baltimore took patients from Kennedy Krieger Institute’s International Center for Spinal Cord Injury out for a sail.

The story of Impossible Dream started in 2002 when paraplegic Mike Browne dreamed of a boat that could be sailed across the ocean by a person in a wheelchair. Browne sailed his custom catamaran for 10 years, later donating the boat to Shake-A-Leg Miami, a sailing center for children and adults with disabilities. From there, the non-profit Impossible Dream was born.

For Rob Klein, being a crew member on Impossible Dream has been a rewarding experience, an opportunity he never thought he’d have after becoming a paraplegic following a diving accident 21 years ago. After learning how to sail with CRAB two years after his accident, he became hooked on sailing and racing.

“Obviously being paralyzed, you don’t have opportunities to sail much, you know, to be part of a boat until something like Impossible Dream comes along,” he said. “Then you’ve got this completely accessible boat that is built essentially for me to sail single handed.”

Klein got his start on Impossible Dream four years ago after meeting the boat’s captain Will Rey in St. Petersburg, Florida, who then invited him to crew on board. He’s been sailing with them every summer since.

“To be able to sleep on board and then (use) the shower, the bathroom, and all that stuff was...I just couldn’t believe it was possible,” he continued.

On Klein’s first trip, he sailed from Miami to the Mid-Atlantic region, experiencing intense conditions as the crew rounded Cape Hatteras. Eight to 10 foot waves rocked the boat, which was 130 miles offshore.

This summer, Klein crewed on Impossible Dream again, sailing around Cape Hatteras for a fourth time going north; his seventh time total rounding the point. Filled with more confidence this time, he was at the helm, helping to break Impossible Dream’s speed record by hitting 21.9 knots — something he never expected to do.

“You know, this boat just instills a lot of confidence in it,” he said. “It’s not many places I’d feel comfortable breaking speed records, you know?”

For first mate Paulina Belsky, getting to see people with disabilities becoming equal members of the crew on board Impossible Dream is one of her favorite parts of the job. Since joining the full-time summer crew of Impossible Dream, she’s met and bonded with many disabled sailors excited to have the opportunity to sail.

“There’s not nearly as many limitations once you’re on this boat as there are in the real world,” she said. “So I mean that’s just cool to see, and it’s cool to see people (and) how they experienced that, how that changes their perspective on what they can do.”

On the outside, Impossible Dream features a racetrack-style ramp that wraps around the boat, allowing sailors in wheelchairs to freely move from the bow to the stern. To board and disembark, sailors can use external lifts or roll up the gangplank.

Inside of the boat, the helm — or steering wheel — is able to be accessed from wheelchairs or special helm seats, which are mounted on a track to allow the person driving to view all of the instruments and controls to steer the boat. To get below deck, wheelchair users can utilize internal lifts to lower themselves to the sleeping quarters and heads. Ceilings down below and counters in the galley are also lower to be more accessible at wheelchair height.

“Just because it’s wheelchair accessible, it doesn’t have to be medical or unattractive,” Belsky said of Impossible Dream. “It can be beautifully designed and functional and accessible for everybody, universally, as well as people in wheelchairs.”

For Captain Will Rey, who’s been on Impossible Dream since its start, the day-to-day sailing part of his job is routine and typical, so those special moments on board come when he gets to take out people who didn’t think they’d ever have a chance to get on a boat and sail.

“It expands what they found was possible,” Rey added.

K-9 Max retired from the St. Michaels Police Department on Wednesday, June 30. Sgt. Max was integral to 120 drug busts. He was rehired by the town on July 14.

Anthony Smith is the Chief of the St. Michaels Police Department. He thought the K-9 was worth his weight in gold especially for drug stops.

The St. Michaels Police Department was full of fun as K-9 Max retired from duty. It was also the SMYLE (Saint Michaels Youth and Law Enforcement) day. So, hot dogs were grilling and balls were being thrown.

Jeremiah Monroe took to the shade during the cook out at the St. Michaels Police Department during a community event on June 30.

K-9 Max will live his retirement with Cpl. Jason Adams and his family.

A doggy bag was created as a retirement gift for K-9 Sgt. Max. There were yummy snacks and playful chew toys in there.

ST. MICHAELS — After a distinguished, seven-year career with more than 120 arrests, Sgt. K-9 Max is retiring from the St. Michaels Police Department.

Max’s position with the police got cut because of budget changes. The police dog will not be replaced.

K-9 dogs are expensive to train as are their handlers. The town thought it was too expensive for the current budget to handle, officials said.

Max will live in retirement with his current handler, Cpl. Jason Adams, and family.

“He bolts to wherever the drugs are. He is like a race car. Without him I go back to being a patrol officer.”

It was a festive sendoff for the dog on Wednesday, June 30. There were hot dogs on the grill, chilling bags of Capri Sun and dog treats in a special package. This retirement was wrapped into St. Michaels Police Department’s SMYLE (St. Michaels Youth and Law Enforcement) program. Community members came out to bid a farewell to the yellow lab.

Adams took stock of Max’s work for the police force and the community.

“To go through the whole training costs $13,000. You can get another dog for two, three or four thousand dollars. What is expensive is training the handler,” Adams said.

“Every agency should have at least one K-9. Drug searches need a search dog. We humans have 10 million sensors in our nose. Dogs have 240 million.”

“We have used him in enforcement of illicit drug crimes. We have even used him in search and rescue — a very good tool. He (doesn’t) call in sick,” Smith said

Pet Supplies of St. Michaels provided Max with a goodie bag. Kids and seniors showed up to celebrate with Max.

Capt. Jeff Oswald, grill master with the hot dogs at the event, stressed the need for officers to interact with the community. “We teach the kids what it is like to be a police officer and what crime is. We want to build partnerships so that we are a friendly face. We have gotten donations from the town like hot dogs, baseball games, Six Flags. We usually go to the Shorebirds. We take them to see the helicopter, to the airport, to the fire department.”

St. Michaels’ population can balloon to 10,000 people on a weekend with nine officers to cover it all. The chief said that domestic violence is their No. 1 crime and most of the problems are drug- and alcohol-related.

The department has tried to address the drug addiction problem with an amnesty program. If someone comes to them and says they want to quit, they won’t arrest them and they will provide treatment options to pursue.

“That is why we have a safe station. The whole goal is that if people want to get off drugs, they can come here and get help without fear of being arrested. And we can point them in the right direction,” said Smith.

At the end of the event, Max’s handler broke into the goodie bag. Max wagged his tail and seemed to smile. 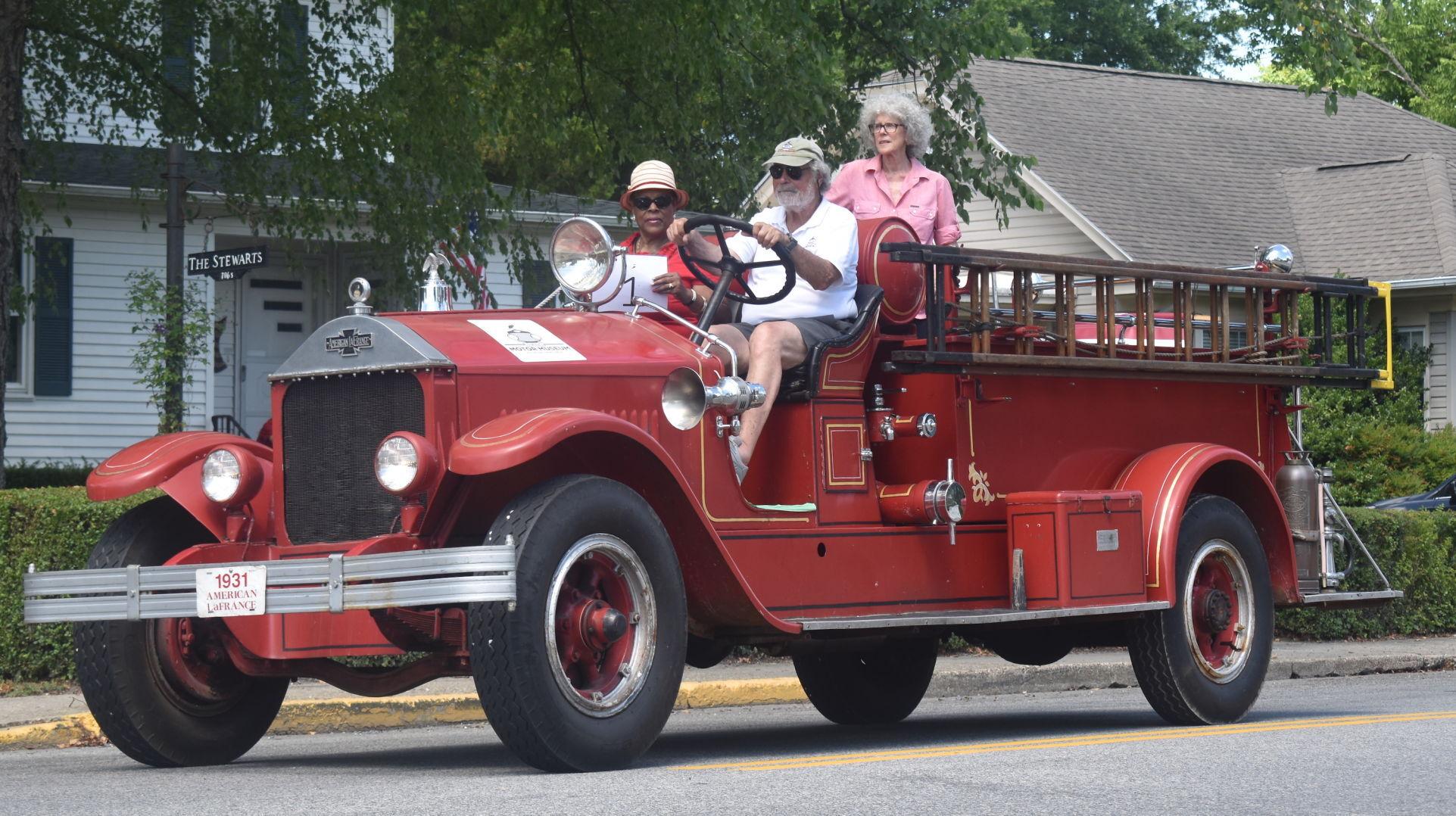 A historic fire truck drives down Talbot Street in St. Michaels for a July 3 parade held by the Classic Motor Museum. St. Michaels had Independence Day events on Saturday. (More photos on A8) 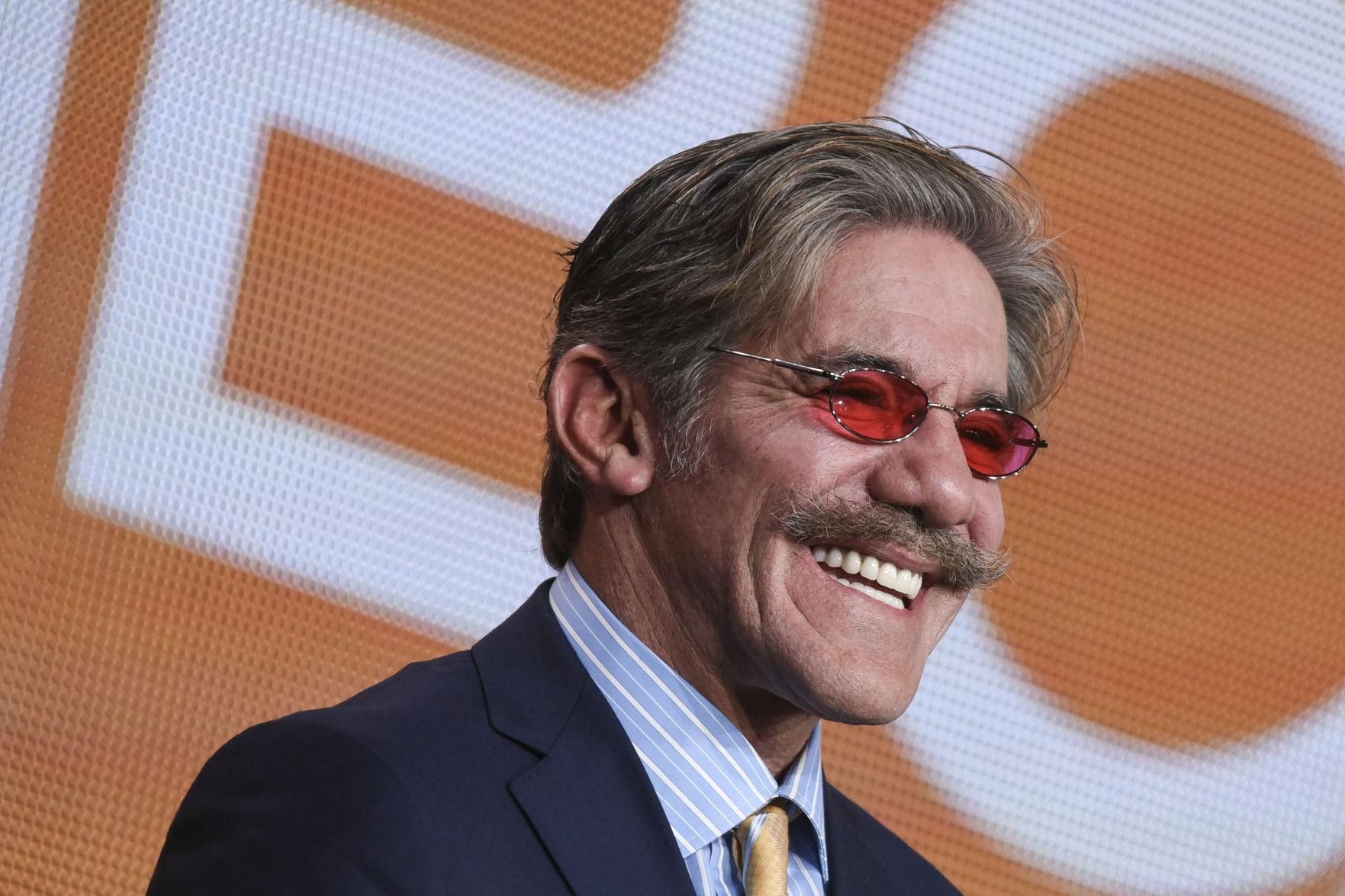 FILE - In this Jan. 16, 2015, file photo, Geraldo Rivera participates in "The Celebrity Apprentice" panel at the NBC 2015 Winter TCA in Pasadena, Calif. Rivera apologized on Nov. 29, 2017, for calling the news business “flirty” in the wake of “Today” show host Matt Lauer’s firing by NBC over sexual misconduct allegations. (Photo by Richard Shotwell/Invision/AP, File)