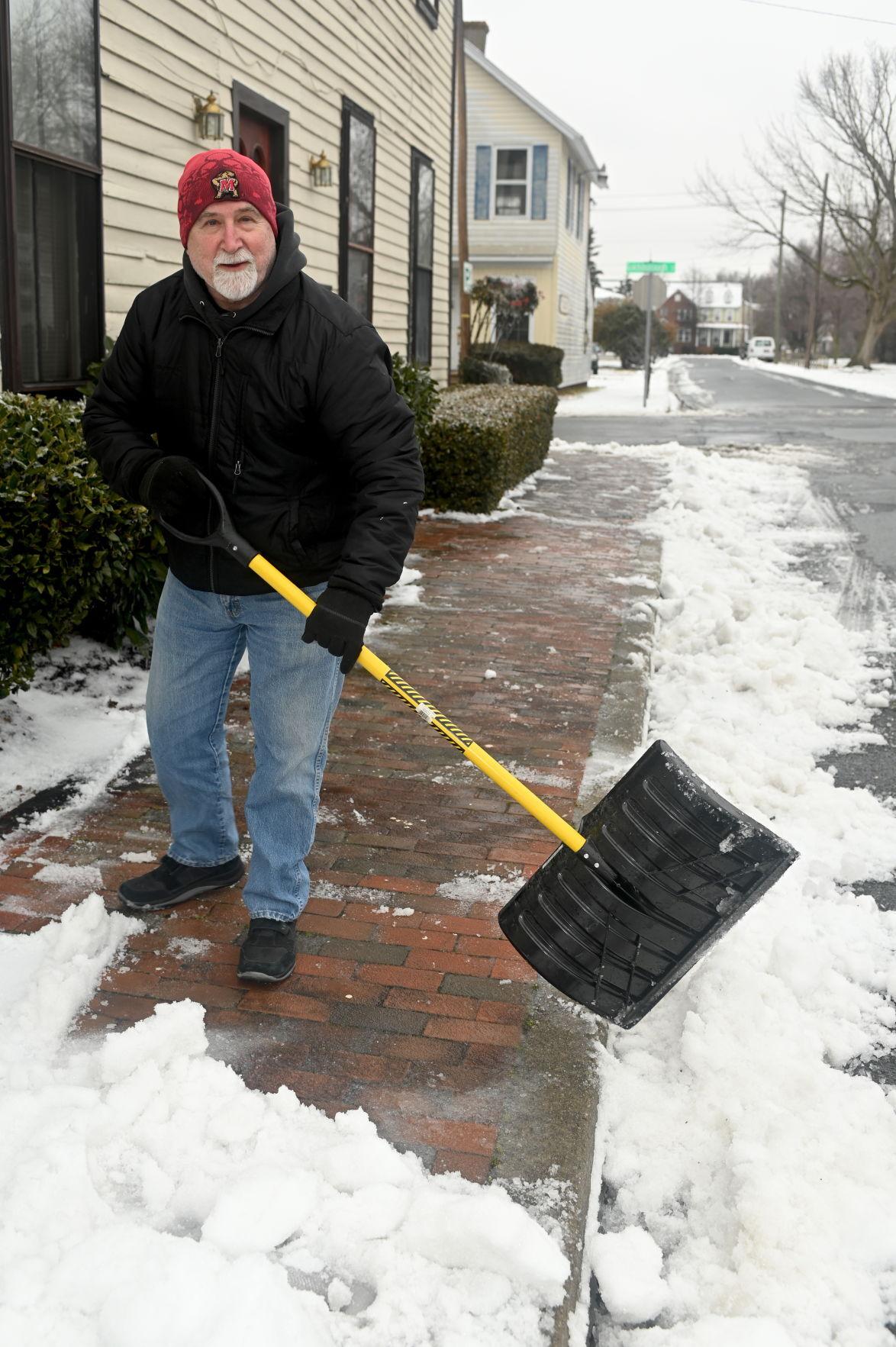 Peter Johnston, principal of Peter Johnston and Associates LLC, cleans off the sidewalk in front of his building in Easton. He is an urban planner. Storms brought snow and ice to the Shore with more winter weather expected. Check out more photos from the winter ice storm on page A10.

Choptank President and CEO Mike Malandro said the cooperative plans to offer the high-speed internet service to more than 1,000 unserved and underserved homes in the three counties by the end of 2021. The projects will hit locations from Hillsboro to Barclay, and south and southeast of Princess Anne.

While deployment is starting this year in only three counties, Malandro said he anticipates installation will begin in Dorchester, Wicomico and Worcester counties in 2022, and in Talbot, Kent and Cecil counties in 2023 as part of the cooperative’s 10-year rollout plan.

“I think it’s obvious by the size of the job that we won’t be able to complete all coverage to a county in a single year,” Malandro said to Eastern Shore state lawmakers during a remote video meeting last week. “Our goal is to reach all of the cooperative members with the offer of broadband services over 10 years.”

The cooperative said through its new broadband subsidiary, Choptank Fiber, it plans to connect up to 2,000 homes each year after its initial 1,000-home deployment in 2021. Grant funding, which it is seeking from the federal and state governments, will help speed up the installation process.

Malandro said in an emailed statement he is “excited to begin installations this coming summer for the many members who are without adequate internet access.” He said his company is “aggressively” pursuing funds to accelerate the project and get more people connected.

“We have partnered with Queen Anne’s, Caroline and Somerset counties to get applications to (Maryland’s) Office of Rural Broadband seeking funds this year,” Malandro said. “We will partner with remaining counties on the Shore in 2022 and 2023.”

Jeff Rathell, who heads Choptank’s board of directors and represents Talbot County, said the board is “proud to undertake this long-term project on behalf of the membership.”

“We know how important broadband is, not only to our members, but to the entire Eastern Shore,” Rathell said.

Choptank’s rural broadband plan was made possible after the company pushed legislation through Maryland’s legislature in 2020 that gave it permission to become member-regulated and lift some of the Public Service Commission’s regulatory obstacles.

EASTON — The Town Council passed a resolution Feb. 15 that overhauls how Easton’s 138 town employees will earn vacation time, compensation pay and other benefits — a package the Easton Police Department had previously protested, citing concerns with revisions to vacation time accrual because it will hurt the department’s ability to recruit, a task it is already struggling to do.

The EPD is concerned because new officers will accrue less vacation time under the model. But Police Chief David Spencer told the council he was satisfied with language keeping his current officers on the normal schedule.

“As long as that language is in there ... we’re fine with that,” he said. But “it will affect new employees.”

The resolution to rewrite the employee pay and benefits handbook was proposed by Mayor Robert Willey and supported by Don Richardson, the town manager. Richardson said it would help cut costs and stop the banking of vacation hours.

“There are two major goals for this handbook adjustment,” said Richardson. “One is to control our accrued absences, and the other is to encourage our employees to take time off, (which) employees have not been doing.”

“By changing some of the wording in there from days to hours, it makes things worse for us,” he said. “We need to have something separate for us. Doing this would crush us, totally destroy how we recruit.”

Richardson said a 12-hour employee, if given a separate column, would earn up to 300 hours of vacation time annually; under the passed resolution, the same employee would earn just 200 hours.

“That’s a substantial difference,” he said, and not smart “from a fiscal perspective.”

Cook said she would back any changes to assisting police recruitment, including allowing newly hired employees to accrue vacation time based on days worked rather than hours.

“We’re having such a hard time with recruitment down at the police station,” she said. “I originally said days for days. It’s a sticking point for me.”

Councilman Don Abbatiello agreed with amending the resolution to create a special exception for police.

“I personally think that this is going to affect in particular our police officers who do a job I have no desire at all to do, and couldn’t do,” he said. Cook’s proposal “would be an acceptable exception to the rule.”

Councilman Al Silverstein said “there are other issues” with recruitment of police officers — and the resolution at least protects current employees.

“This isn’t the biggest issue with the police department,” he said. “And it’s more important to protect the people we have on board and make sure the new people coming in understand the schedule.”

Easton has debated the package since December, amending and rewriting it multiple times.

The council voted 4-1 for the resolution, with Cook against.

Talbot County Public Schools are operating on a hybrid model with students able to come to class on certain days.

EASTON — Seventy-one percent of Talbot County Public Schools staff members are now requesting a vaccine, and all who pre-registered to get vaccinated will receive the first dose by Feb. 19, signaling a path forward for educators as they work toward getting students back into school buildings full time.

Talbot County Superintendent Kelly Griffith told Board of Education members that in addition to the scheduled vaccinations, about 102 staff have now received a second dose of the Moderna vaccine.

After the vaccinations, 507 of 717 staff members will have received a dose of the vaccine — 210 have not requested a vaccine, either because they declined it or are getting vaccinated outside of the school system.

The vaccinations are one promising step toward normalcy, Griffith said, but there are other challenges, including social distancing protocols.

“We’re reviewing when we can move from hybrid to normal,” she said. “What is causing us to stay at a hybrid model is six-foot distancing. If we can get that relaxed to a three-foot distancing, we can have 70% of the students (for in-person learning) five days a week.”

Griffith is still working with the Maryland Department of Education and local health officials on any initiative to change social distancing rules, but she said the goal is to make that “happen before the end of the school year.”

Helga Einhorn, the assistant superintendent for instruction, said she is looking to expand summer learning opportunities this year to accommodate for the challenges with learning during the pandemic.

That was a point raised by U.S. President Joe Biden at a CNN Town Hall this week. Biden said public schools should be open five days a week for in-person learning by May and summer school should be expanded.

“Traditionally we run a 19-day, half-day program predominantly for our middle school and our elementary school students, and a credit recovery for our high school” students, Einhorn said. “This year, we ‘re looking at putting together more flexible options so parents can have more choices.”

Einhorn mentioned that she will be drafting up a summer-learning schedule in the foreseeable future, but any plan was “contingent upon having staff available for the summer.”

Schools across the country are tackling learning during the pandemic in different ways, with private schools mostly conducting in-person learning and public schools going virtual or hybrid.

The U.S. Centers for Disease Control and Prevention released re-opening guidelines for schools earlier this month, recommending that schools in communities with positivity rates higher than 8% conduct hybrid learning. The CDC recommends keeping a six-foot social distancing protocol in all schools.

As of Feb. 15, Talbot County has a positivity rate of 5.68%. But the social distancing requirement is keeping the school system on a hybrid model for now.

Emily Jackson, a board member from District 4, said the school system is working as quickly as possible to get students back to in-person learning full-time.

“We’re building this plane as we’re flying it,” she said. “Whether it’s board members or superintendents or the principals or the teachers, everybody’s kind of making this up as we go.”

“This is a time in our profession we have never seen before,” she said. “We’ve had to pivot on the dime. We’re just trying to get back to as much normalcy as we can.”

Crime
centerpiece
Police look for a suspect as victim recovers from gunshot to face; mayor vows to address crime

CAMBRIDGE — Police are looking for a suspect after a man was shot in the face Wednesday evening, Feb. 17, in Cambridge.

The 19-year-old Cambridge man is in stable condition after he was shot in the right side of his face from what police said was “quite a distance away.”

Capt. Justin Todd, public information officer with Cambridge Police, said the victim told police he was standing on the 700 block of Washington Street about 8:24 p.m. when someone shot him from a distance.

When responding officers located the victim, he was bleeding from his face but was conscious and alert, Todd said. Todd called the victim “a very fortunate young man.”

Todd added, “He actually walked to the ambulance.”

Cambridge Mayor Andrew Bradshaw reacted Thursday to news of the shooting, “This is the kind of absolutely unacceptable crime that is going to come to an end in the City of Cambridge, period.”

“One of the foremost goals of this administration and of this City Council is to bring a sense of pride in place to our city, and ending the violence is part of that effort,” he added.

Bradshaw promised an ongoing review of successful practices from other agencies, as well as providing resources to law enforcement and community members for crime prevention and deterrence, and successful resolutions of investigations.

The mayor pointed to a recently introduced ordinance as part of the solution: “City Ordinance 1171, currently under review, is part of how we will solve this. By incentivizing Cambridge Police officers to stay with our agency, as well as encouraging them to locate in the city in which they work, we’re ensuring our officers have a personal investment in ensuring the safety of our city.”

“Cambridge will no longer accept these kinds of things, nor will we see them as normal,” Bradshaw concluded.

The investigation is continuing, and anyone with additional information is asked to contact the Cambridge Police Department’s Detective Division.