Get Started
You have permission to edit this page.
Edit

ST. MICHAELS — Three restaurant owners from St. Michaels came together to create a list of rules designed to protect employees and customers from the spread of COVID-19.

Del. Johnny Mautz, owner of Carpenter Street Saloon in St. Michaels and a Republican representing Talbot County in the state House of Delegates, met up with Terye Knopp, owner of Foxy’s Harbor Grill, and Chris Agharabi, owner of Ava’s Pizzeria and Theo’s, to work out a way to help with some of the confusion surrounding COVID-19 guidelines.

“We all agreed that there is an aura of COVID fatigue.” Mautz said. “People are fatigued about all the information that they’ve gotten about COVID, and there’s a lot of confusion. And there’s a little understanding the fact that sometimes one day can be different than the next.”

“We’ve got challenges running our businesses for our employees and for our guests and for ourselves,” Mautz added. “We started talking to come up with some guidelines to just put on paper.”

Mautz, Knopp and Agharabi compiled the list and forwarded it to other local restaurants, who all supported the effort and added to the list.

“They’ve all said, ‘Yes, absolutely. We need to get this clear information out to everyone to provide some reliable, clear ideas that we can all look to as we kind of go through the day-to-day trials and tribulations,’” Mautz said.

“A lot of these things are already being done,” Agharabi said. “It’s just letting people know this is what we do and this is what you can expect from us. We want you to follow the rules that are out there. Most people are already doing this, it just formalizes it to say we’re unified doing this.”

Mautz added that the list is not designed to supplant or replace oversight and regulation from the local health department, but rather a way to support local efforts.

“You know, the health department is overwhelmed. The county is overwhelmed. Towns are overwhelmed. The police are stretched thin,” Mautz said. “And we thought it would be our way of contributing to the effort here to promote public health and public safety. And, you know, with that comes happiness, right? We will make everybody happy.”

Our commitment to you:

What we ask from you:

EASTON — The Talbot County Council, during a Tuesday, July 28, meeting, scratched its idea to set a limit on indoor and outdoor gathering sizes to battle the COVID-19 pandemic, citing confusion surrounding the restriction’s applicability to “special events,” such as weddings.

The council floated the idea of restricted gatherings at the recommendation of County Health Officer Dr. Fredia Wadley — but the council members’ eagerness to take Wadley’s health safety advice appeared to fall apart as they struggled to nail down the details and implications of the measure.

Council President Corey Pack said during Tuesday’s meeting he wasn’t “comfortable” setting a blanket limit on group sizes, because in some scenarios, “perhaps 150 people spread across 10 acres would be reasonable.”

Pack suggested the county planning office and health department could authorize event sizes on a case-by-case basis, based on the “nature of the event,” the venue size and setup, and the organizers’ plans to ensure public safety.

Council Member Frank Divilio agreed with Pack, saying capacity restrictions should be determined per event, “especially on the Eastern Shore.”

“If you tell a farmer they don’t have enough space, and they live on 1,000 acres, they’re going to look at you funny,” Divilio said.

But Wadley, appearing frustrated with the council’s indecisiveness, pushed back against Pack’s idea. She said she’s “tired of being people’s mother to help them find a loophole so they can have a party.”

“I don’t have enough hours in the day to do that,” she said, adding if the council doesn’t want to set a limit on group sizes, then “fine and dandy,” but don’t ask her to approve individual gatherings.

Pack assured Wadley that approving events would not be “laid at (her) doorstep.” In response, the health officer reiterated her stance against allowing large groups of people to gather in any capacity during the pandemic.

“When you are talking about a virus like COVID-19, there is no safe number,” Wadley said, asserting if the council was not going to pick a number to limit groups, she did not want her name associated with a resolution that allowed for congregating.

Although people are “good intentioned” when they plan events, she said, once they “get the alcohol out and they’ve been there for two hours,” physical distancing, masking and other virus spread-preventing measures tend to fall by the wayside.

Council Vice President Chuck Callahan weighed in to say the council was “sort of all over the map” in its discussion of pandemic-fighting restrictions. Callahan suggested the council iron out the details and revisit the measure at its next meeting.

Divilio offered that the county could develop a “COVID permit” for events, which would allow organizers to lay out their plans and get the health safety advice and approval of local officials based on their venues’ specific arrangements.

Following a lengthy discussion among the council members, Pack said he would develop a plan for gatherings limits and introduce it at next month’s meeting on Tuesday, Aug. 11. The specifics of Pack’s suggestion have yet to be determined.

Crime
Suspect in burglary apprehended after driving onto beach in Betterton
By TRISH McGEE pmcgee@thekentcountynews.com
07.31.20

CHESTERTOWN — Maryland State Police have charged a Chestertown man with burglary and theft from a school where he had once been employed.

Kareem Roderick, 23, was apprehended July 18 after leading police on a high-speed chase that ended on the beach in Betterton, according to court documents.

He also is charged with unlawful taking of a vehicle.

Roderick is being held without bail in the Kent County Detention Center pending a preliminary hearing set for Aug. 17 in the District Court for Kent County. At that time a judge will determine if there is probable cause to believe that Roderick committed the offenses.

Roderick is accused of breaking into Chestertown Christian Academy and removing four televisions, three speakers and a power mixer. Total value of the electronic equipment is estimated to be $2,600, according to court records.

In charging documents, police allege that when Roderick was apprehended he was driving a van that he had taken without permission the day before from Chestertown Baptist Church.

TFC Tanner Nickerson of the Maryland State Police reported that he was working stationary radar on state Route 298 at Turners Creek Road near Kennedyville at about 11:15 p.m. July 18 when he observed a white Ford van traveling above the speed limit.

The van had a Delaware license plate. Police subsequently determined that the license plate had been taken from a vehicle belonging to a church in Middletown, Del., according to court records.

After police radar clocked the driver — subsequently identified as Roderick — traveling 72 mph in the posted 50-mph zone, Nickerson activated the emergency equipment on his patrol vehicle and attempted to stop the van.

A chase ensued from state Route 298 onto Route 566 and then Route 292, through the towns of Still Pond and Betterton. At one point, Roderick was driving as fast as 90 mph, according to court records.

He allegedly was driving 80 mph while traveling through Still Pond, where the posted speed limit is 25 mph.

The van allegedly was traveling as fast as 75 mph when it entered the town of Betterton, where the speed limit is 40 mph and then drops to 25.

Roderick slowed down to 60 mph when he entered the 25-mph zone, according to court records.

At that point Nickerson said he was advised by the MSP-Centreville Barrack to discontinue the pursuit. He deactivated the emergency equipment on his patrol car and slowed down to the speed limit as he followed the van along Main Street toward the beach, according to the statement of probable cause.

In charging documents, Nickerson wrote that the van ran over the over the curb and boardwalk and drove out onto the beach. Nickerson pulled up to the curb, reactivated the emergency equipment on his vehicle and notified the MSP barrack in Centreville that the van was stuck in the sand.

Nickerson reported that while he was waiting for backup units to arrive, he gave the driver multiple commands over the public address speaker and the driver did not comply.

“The driver of the vehicle was attempting to become unstuck and was still attempting to drive in forward and reverse but just dug deeper in the sand,” Nickerson wrote in charging documents.

The trooper also said he observed that the side windows of the van were covered with what appeared to be white paint.

After deputies from the Kent County Sheriff’s Office and MSP troopers from the Centreville Barrack arrived, the driver of the vehicle was given more verbal commands to step out of the van and to turn off the engine.

The commands were ignored, according to court records.

In the van, police located three Peavey speakers, one Behringer audio mixer and four televisions, according to court records.

In addition to the criminal charges, Roderick was issued traffic citations for driving while license is suspended; displaying registration plate issued for another vehicle; negligent driving; reckless driving; attempt to elude police by failing to stop; and multiple counts of exceeding the posted maximum speed limit. 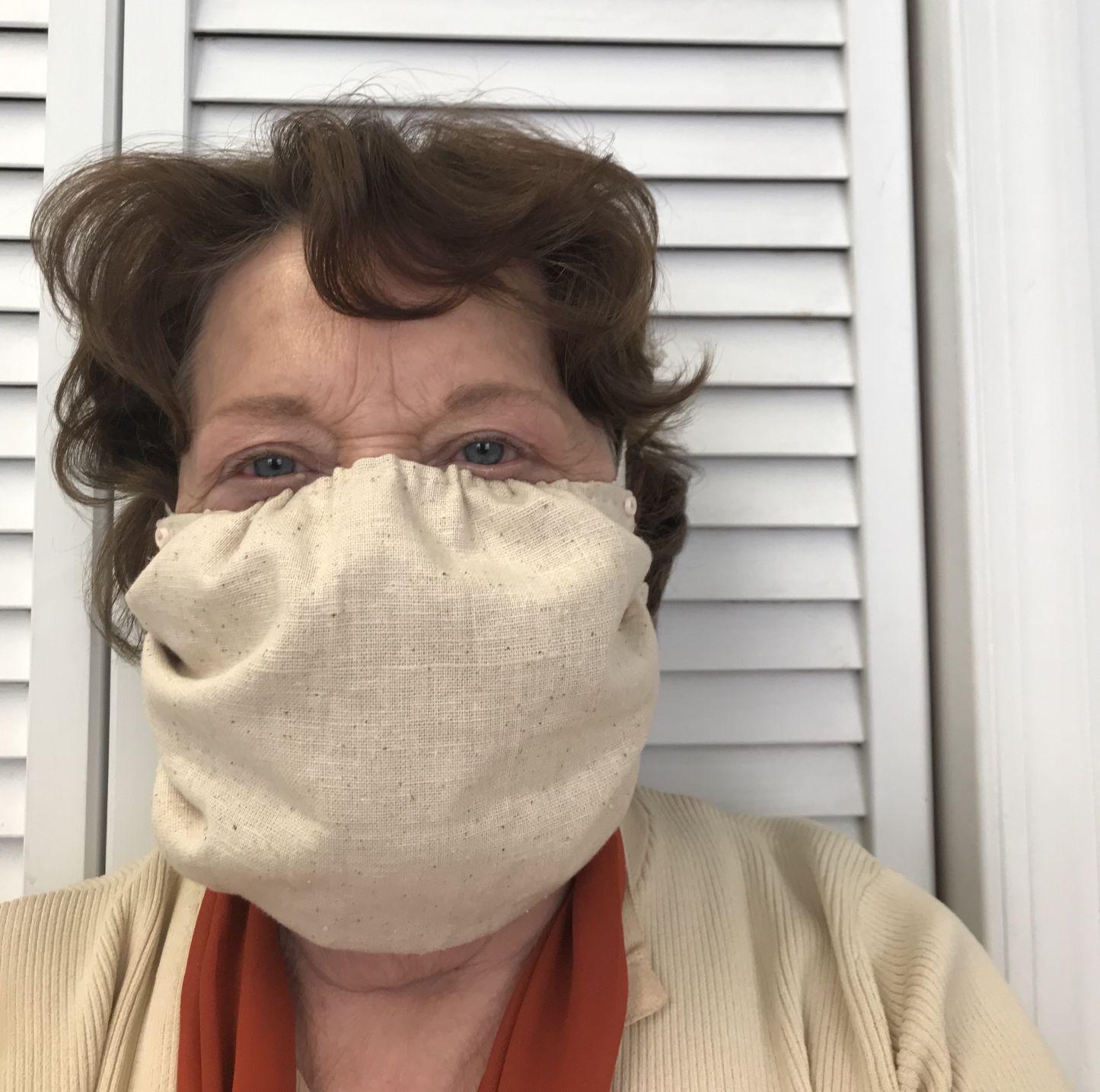 Talbot County Health Officer Dr. Fredia Wadley urges the public against debating the efficacy of masks as a tool to help fight the COVID-19 pandemic.

DENTON — The suspect wanted in connection with the fatal shooting of a man on July 1 in Denton was taken into custody late Thursday morning, July 30, in New Jersey.

The suspect, Jamaine V. Cheers, 33, of Denton, was arrested without incident shortly before noon Thursday by U.S. Marshals in the 2800 block of the Boardwalk in Atlantic City, New Jersey. Cheers is being held in the Atlantic County (N.J.) Jail pending extradition to Maryland.