EASTON — Dozens of civil rights activists, African-American leaders and passionate individuals joined the Summer’s Freedom Bus Ride on Monday to highlight historical and contemporary racism and concerns about policing across the Eastern Shore.

Modeled after the trips of the Freedom Riders during the civil rights movement in the 1960s, the bus made stops at significant landmarks in Easton, Cambridge, Salisbury, Berlin and Ocean City to bring awareness to the activists’ fight for racial equality and justice and the end to police brutality.

The monument, which was erected and placed on the Talbot County Courthouse lawn in 1916, has been a point of contention within Talbot County in recent years. Opponents of the statue argue that it is a symbol of racism and white supremacy; those in favor of keeping it argue that removing the statue would be erasing county history.

The Talbot County Council voted 3-2 to keep the monument in place in August 2020. A federal lawsuit was filed in May 2021 to take efforts on removing the statue from the courthouse grounds to the next level.

Before local activists spoke about the monument, the crowd linked arms and gathered to sing “Ain’t Gonna Let Nobody Turn Me ‘Round,” a freedom song frequently sung by participants in earlier civil rights movements.

“The only thing I can say to you is that we have three council members who embody the messages that this monument set, which is racism, bigotry and hatred for a group of people,” said Richard Potter, president of the Talbot County branch of the NAACP.

Talbot County’s NAACP branch and other groups in support of moving the monument “tried” to work with the county’s elected officials, but they were “unwilling” to work with the groups, Potter said. One of those groups is the Move the Monument Coalition, whose yellow-shirted members came to the courthouse lawn in solidarity with the Freedom Bus riders.

The coalition, which formed after the death of George Floyd last summer, “believes that this monument has no place on a public site of justice and equality,” said Jess Taylor, a member of the Coalition’s leadership team.

The Freedom Bus then stopped at the Harriet Tubman Memorial Park in Cambridge, taking a moment of silence to remember Tubman and Gloria Richardson, another local civil rights activist who died at 99 last Thursday.

Members of the crowd in Cambridge spanned a wide range of ages, but Delegate Sandy Bartlett, D-Anne Arundel, had a message for the next generation of civil rights activists.

“If you look around today, you will see young people amongst us; we are teaching them that the expectation is no racism, equality and opportunities for everyone,” she said. “So this march today, this Freedom Ride, is to send the message that we will not tolerate racism anymore.”

Freedom Bus riders Drake Smith and Erin Shields, both 18, are fresh graduates of Anne Arundel County high schools. The two came on the bus together to speak up for civil rights and bring young representation to the tour, hoping to inspire others to get involved.

“Last summer, I feel bad because I didn’t really speak out that much, I didn’t go on any protests,” Shields said. “So I wanted to show up, definitely as a young person to represent and make a difference.”

“I just don’t want people to think that was a one and done thing, right?” Smith said. “This is an ever-moving struggle, and we’re just out here until we get the justice we demanded.”

The Freedom Bus Ride tour also made stops at the lynching memorial in Salisbury and the American Legion post in Berlin to learn about local Black history and discuss racism and policing with members of the community. After meeting with the freedom riders at the memorial, Salisbury Mayor Jay Day endorsed the leaders’ efforts to address systemic racism and police misconduct. Day also told the group that he stands with his officers when they’re right and will discipline them when they’re wrong.

A final stop in Ocean City marked the end of the Freedom Bus riders’ journey. Civil rights leaders from the buses originally planned to address the mayor and town council at a regular session of city council, but that council meeting was canceled.

However, leaders were still able to speak with Ocean City Mayor Rick Meehan, calling on him to reconsider an investigation of the Ocean City Police Department after an incident last month. They also asked Meehan to consider hiring an equity officer — an official who would promote equal opportunity and minority businesses in the city — which he said would take under advisement. Meehan also committed to have future meetings with the Worcester County NAACP president Ivory Smith.

“We don’t listen to what politicians say, we watch what they do,” said Carl Snowden, the event organizer speaking on behalf of the Caucus of African American Leaders. “We are looking forward to seeing what the mayor does concerning the promises he made.”

The tour culminated with a protest on the boardwalk in Ocean City, where local police officers are under scrutiny following the use of force and arrests on two Black teenagers who allegedly violated the city’s vaping prohibition last month. Ocean City, its beaches and other towns across the Shore historically had segregationist laws and atmospheres designed to exclude or restrict access to Black people and other minorities.

Freedom Bus riders are hopeful their tour and protests will continue to bring awareness to police brutality and systemic racism on the Eastern Shore. To Jo Ann Scipio, who came on the bus representing the Caucus of African American Leaders and her historically Black sorority Delta Sigma Theta, the public needs to know that they mean business.

“Like they said, when you mess with one of us, you’ve got all of us to deal with,” Scipio said. 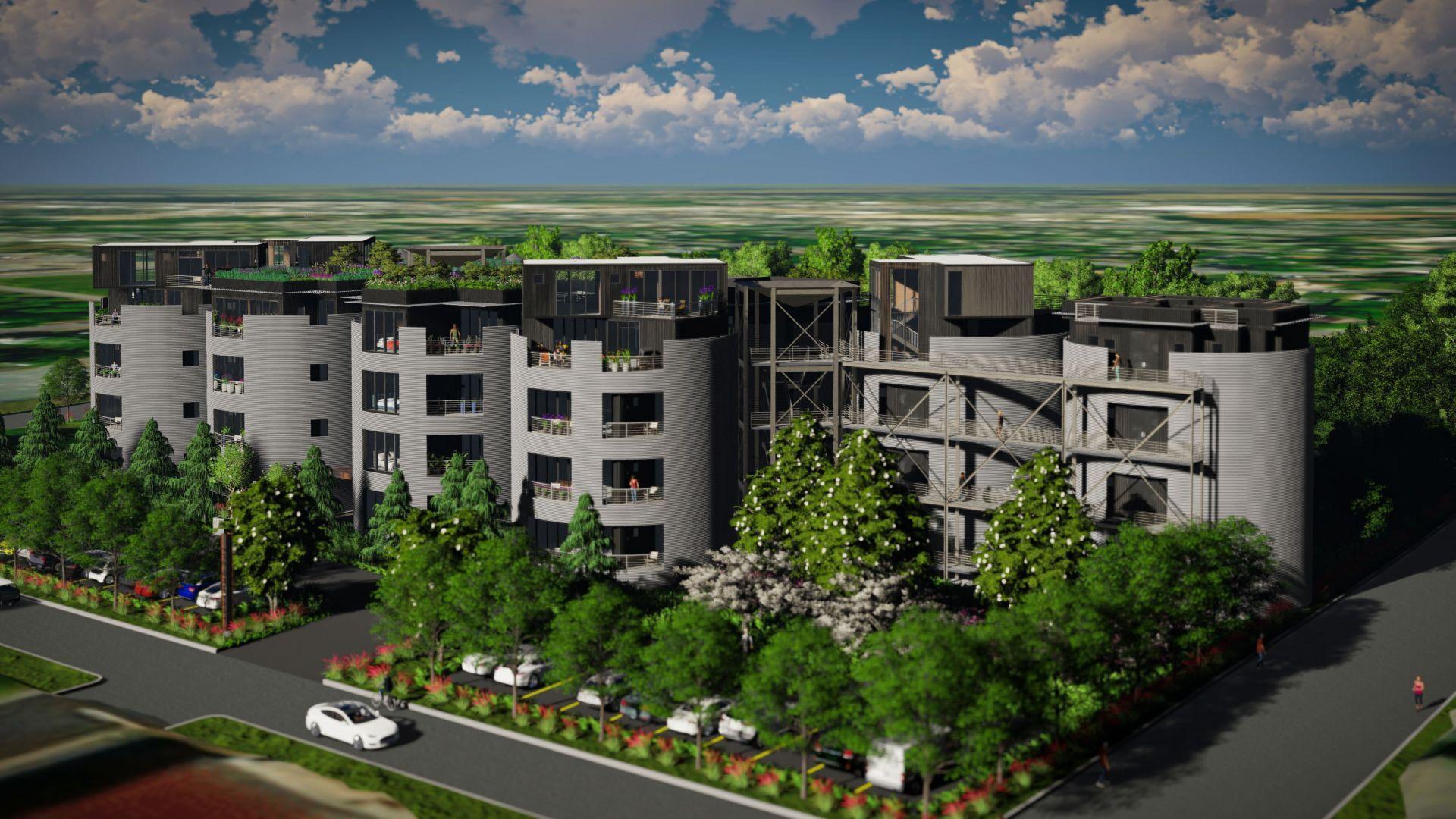 The Granary at Easton is a proposed adaptive reuse of grain silos and a grain elevator property operated by Perdue Farms.

EASTON — Gov. Larry Hogan awarded $22 million to 25 restoration projects along the Chesapeake Bay and its watersheds, helping to fund stream restoration, stormwater management and other environmental projects in 123 sites across Maryland.

The funding comes through the Chesapeake and Atlantic Coastal Bays Trust Fund, a state program that streamlines the grant award process for organizations and nonprofits working on environmental projects. Of the 123 projects, 12 would be on the Mid-Shore, the majority of them in Kent, Queen Anne’s and Talbot counties.

Among a major recipient of funding this year is ShoreRivers. The environmental organization will get $1.95 million for two projects in the Chester River and one in Morgan Creek in Kent County. The work will take more than two years to fully complete.

Kristin Junkin, the director of operation and finance for ShoreRivers, said they will be restoring the Foster Farm Stream and creating a “wetland complex” at Schillinger Farm. Both are within the Chester River watershed.

At Morgan Creek, ShoreRivers will create a 15-acre wetland complex in the headwaters that will ultimately help reduce runoff from 482 acres of surrounding agricultural operations.

The Department of Natural Resources, which administered the grants, said the 2022 fiscal year grants will remove 45,000 pounds of nitrogen, 4,500 pounds of phosphorus and 6,500 tons of suspended solids.

”These projects best exemplify meaningful action of local communities and organizations partnering to improve water quality of our Bay,” said DNR Secretary Jeannie Haddaway-Riccio in a statement. “We are pleased to continue our support of restoration that not only protects our waterways, but also provides critical nature-based solutions to combat climate impacts.”

1 On this day in history, in 1861, during the Civil War, the first Battle of Bull Run was fought at Manassas, Virginia, resulting in a Confederate victory. In 1954, the Geneva Conference concluded with accords dividing Vietnam into northern and southern entities. Five years ago: Donald Trump accepted the GOP presidential nomination. Famous birthdays: Singer Yusuf Islam (pictured and also known as Cat Stevens) is 73. Cartoonist Garry Trudeau is 73. Former MLB All-Star pitcher CC Sabathia is 41. Figure skater Rachael Flatt is 29. (More history on A4)

2 Lifelong waterman and Eastern Shore pioneer Captain Warren Butler, 92, died Friday, July 2, of apparent heart failure. Butler had a lifetime passion working as a waterman, first, working alongside his father and brothers to help support their family. From 1954 to 1983, Butler worked in the oyster and crab industry in Maryland, Delaware and New Jersey. Throughout his life, he owned and operated 17 commercial boats, carrying may fishing parties out of the Chesapeake Bay, also oystering and sightseeing. In 1970, Butler was appointed as the first African American member of the Queen Anne’s County Public Schools Board of Education. He served there for 12 years, and served as the first African American President of the QA Board of Education from 1973 to 1975. (Story on A2)

3 Billionaire Jeff Bezos blasted into space Tuesday on his rocket company’s first flight with people on board, becoming the second billionaire in just over a week to ride his own spacecraft. The Amazon founder and richest person in the world was accompanied by a hand-picked group: his brother, an 18-year-old from the Netherlands and an 82-year-old aviation pioneer from Texas — the youngest and oldest to ever fly in space. “Best day ever!” Bezos said when the capsule touched down on the desert floor in remote West Texas after the 10-minute flight. 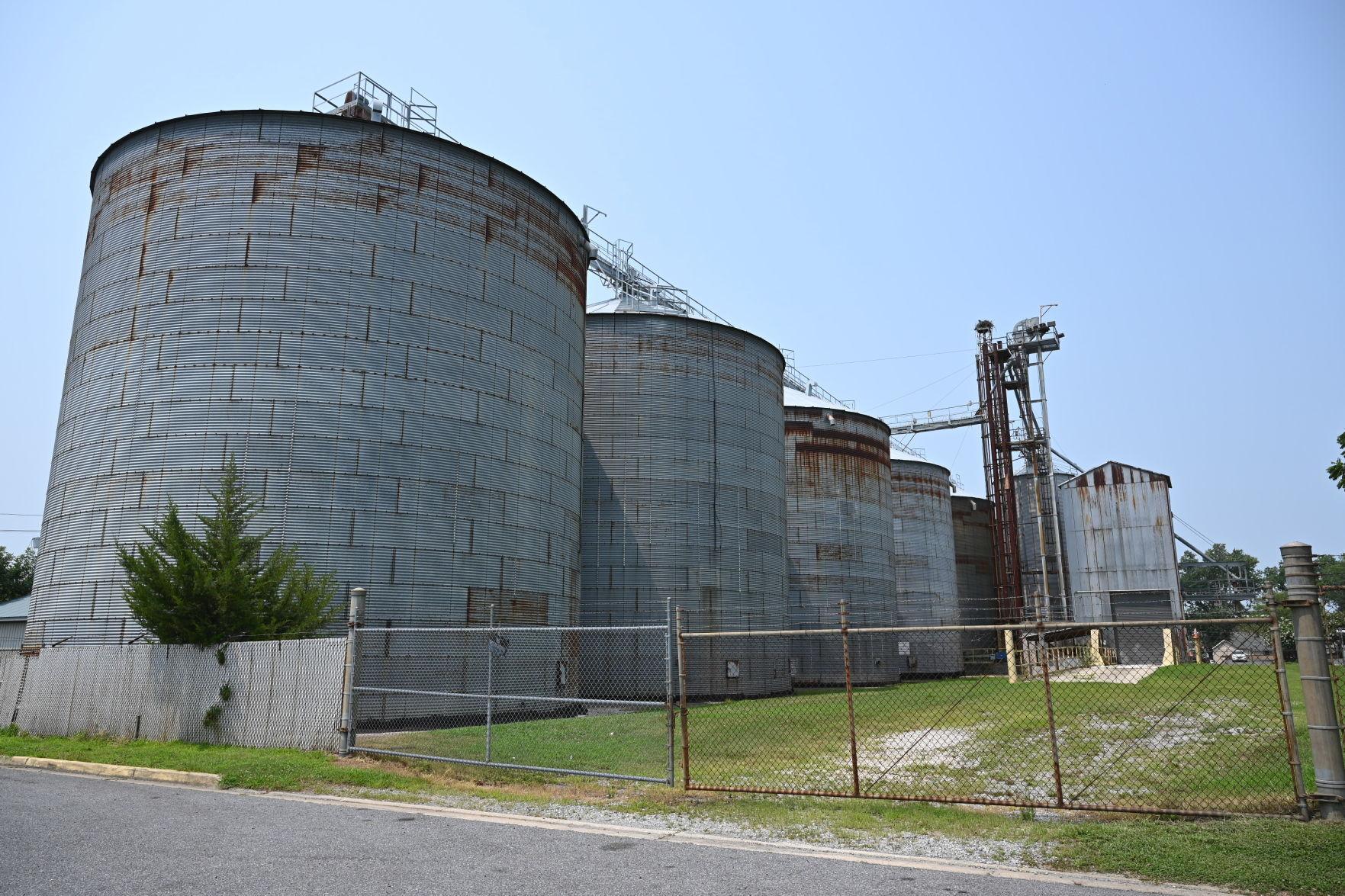 These massive grain silos are in downtown Easton. There is an architect who has drawn up plans to transform them into new residences with the highest views in Easton. Ten silos could be turned into 40 residential units. 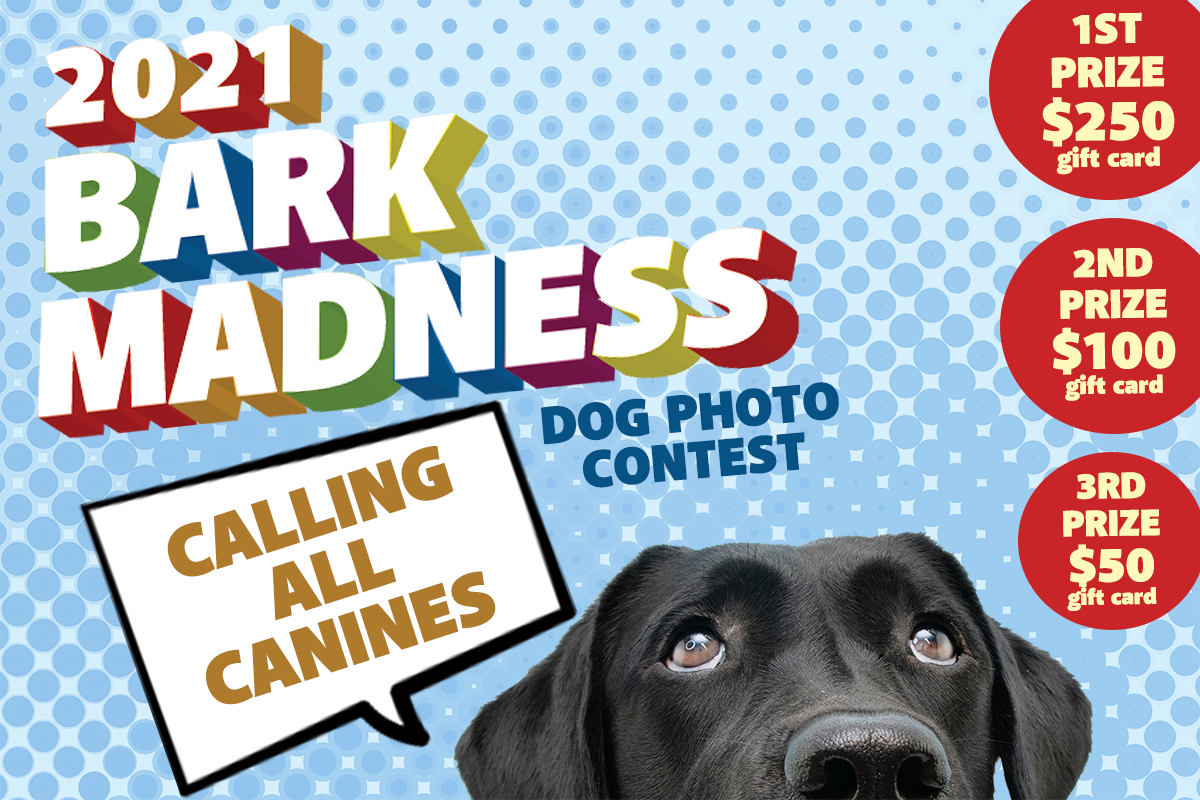 APG Chesapeake is proud to announce its second annual “Bark Madness” contest with great prizes including a $250, $100 and $50 gift cards. 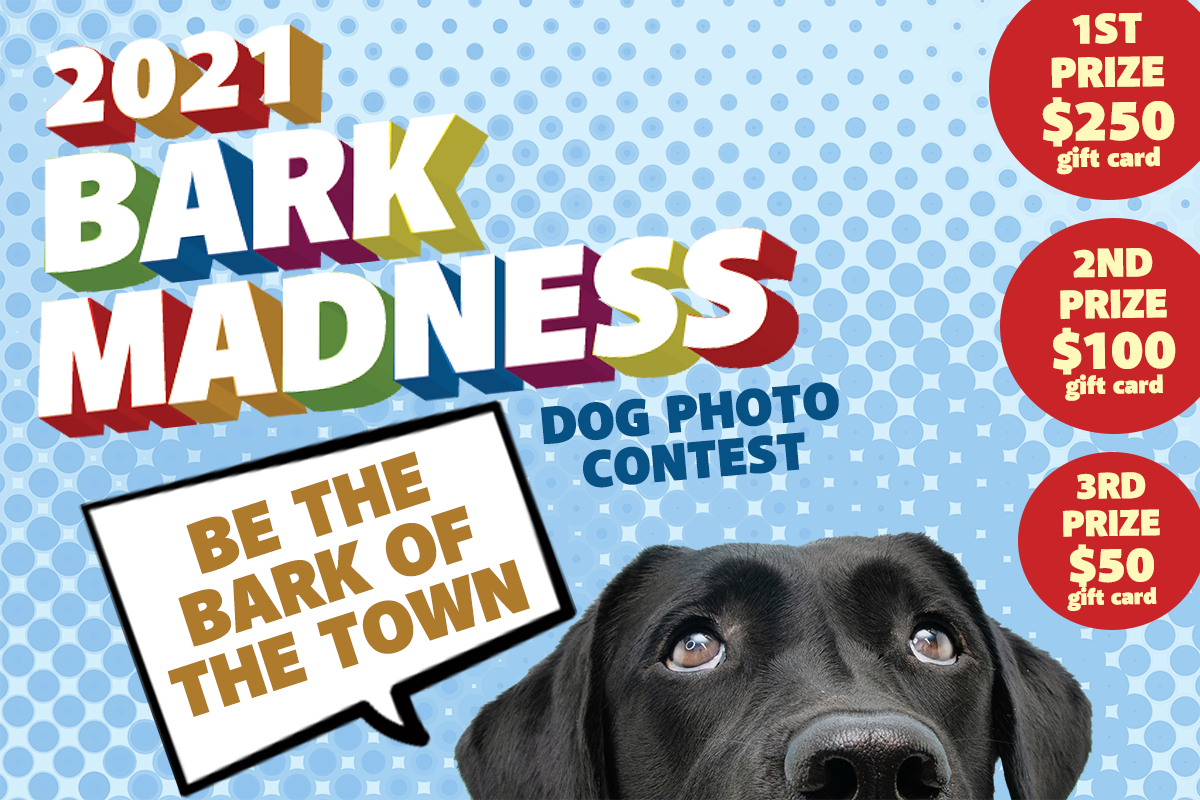 The Bark Madness dog photo contest is returning to the Shore.