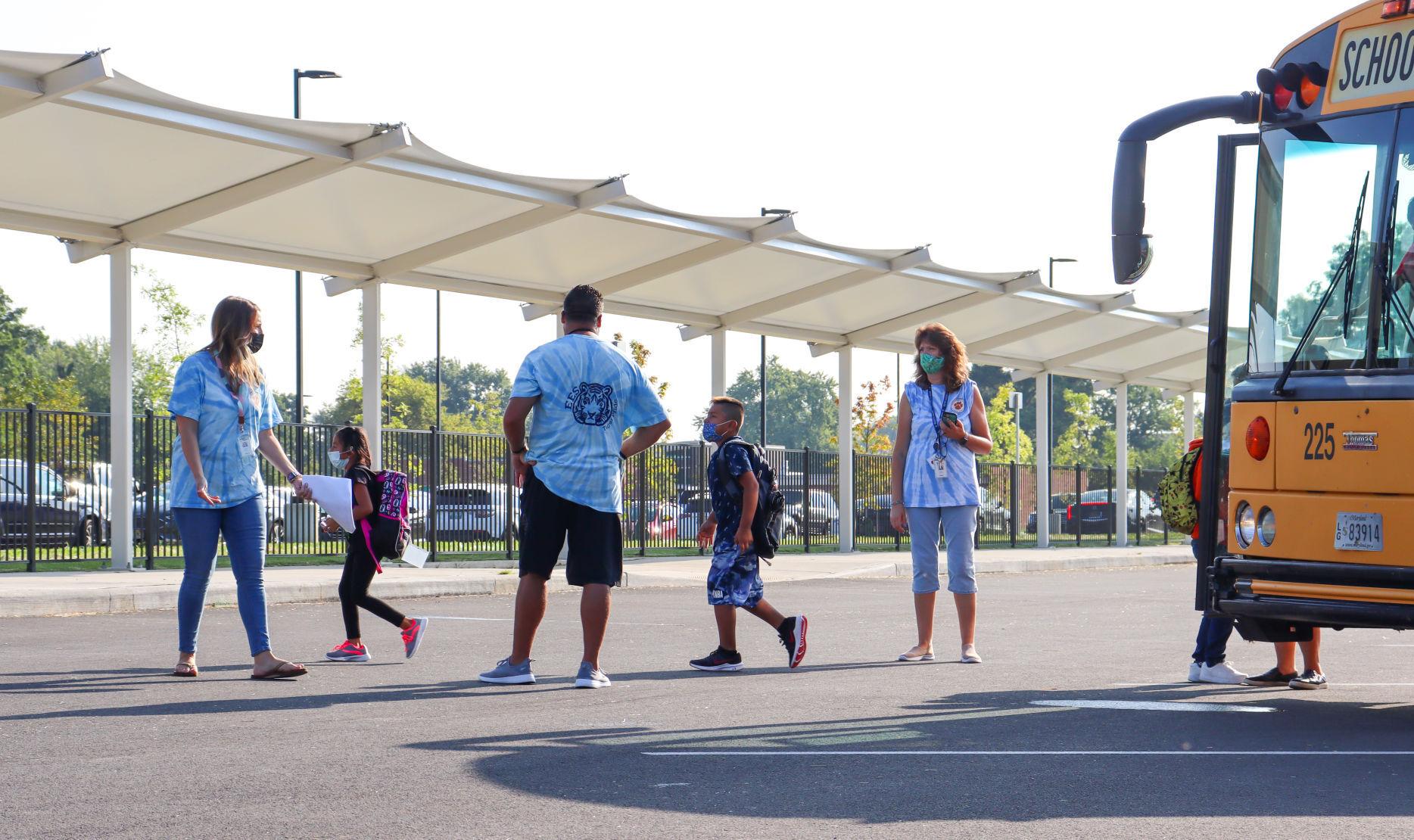 Easton Elementary School staff members welcome students back as they hop off of a school bus in the morning for the first day of school on Monday, Aug. 30.

An abandoned vehicle is half submerged in a ditch next to a near flooded highway as the outer bands of Hurricane Ida arrive Sunday, Aug. 29, 2021, in Bay Saint Louis, Miss. (AP Photo/Steve Helber)

A young girl blocks her face from the wind and rain produced by Hurricane Ida, Sunday, Aug. 29, 2021, in New Orleans, La.

EASTON — Hurricane Ida could bring heavy rain and winds to the Eastern Shore and Mid-Atlantic region is it cuts a path through the southern and eastern U.S.

National Weather Service meteorologist Nick Carr said IDA is expected to bring mostly rain to the Shore as well as other areas such as Philadelphia and New York.

Carr said the Eastern Shore will likely start seeing rain from Ida on Wednesday with 1 to 3 inches in some areas such as Easton and 3 to 5 inches in other areas of the Delmarva Peninsula. He said winds are expected in the 20 to 30 miles per hour range when Ida swings through the region.

The storm is projected to move into Alabama, Tennessee, Kentucky, West Virginia and Virginia before moving to the East Coast.

Carr said Philadelphia and New York can also expect rain from the storm. The National Weather Service is looking at potentially 3 to 5 inches of rain for those areas on Wednesday and into Thursday.

Carr also said while heavy rains are forecasted for the Eastern Shore there could be potential for high winds and tornados. The Washington D.C. and Baltimore areas are also projects to get rain and storms from Ida.

The hurricane struck New Orleans on the 16th anniversary of Hurricane Katrina. The storm brought 150 mile per hour winds, torrential rain and a storm surge that is causing flooding and temporarily reversed the flow of the Mississippi.

An estimated 1 million people are without power due to the storm. Those power outages could be lengthy in New Orleans and other areas feeling the storm’s destruction.

Rain impacts from the storm this week could stretch from Tampa to New York and Boston.

A man sells Taliban flags in Kabul, Afghanistan, Monday, Aug. 30, 2021. Many Afghans are anxious about the Taliban rule and are figuring out ways to get out of Afghanistan. Some street vendors have managed to turn the Taliban’s arrival into a money making business selling their white flag emblazoned with a Quranic verse.

President Joe Biden returns a salute as he and first lady Jill Biden arrive at Dover Air Force Base, Del., Sunday, Aug. 29, 2021. Biden embarked on a solemn journey Sunday to honor and mourn the 13 U.S. troops killed in the suicide attack near the Kabul airport as their remains return to U.S. soil from Afghanistan. (AP Photo/Manuel Balce Ceneta)

The Pentagon said the last transport plane left Monday afternoon ahead of the Aug. 31 deadline set by the ruling Taliban for the exit.

The U.S. was racing to evacuate Americans, military personnel and some Afghans ahead of the deadline.

The Pentagon and Biden administration also face questions on reports that several children and other civilians may have been killed in a Sunday drone strike aimed at ISIS-K bombers looking to attack the Kabul airport.

“On Sunday, U.S. military forces conducted an unmanned over-the-horizon airstrike on a vehicle known to be an imminent ISIS-K threat. This self-defense strike successfully hit the target near Kabul airport. Significant secondary explosions from the targeted vehicle indicated the presence of a substantial amount of explosive material. We are aware of reports of civilian casualties, and we take these reports very seriously, and we are continuing to assess the situation,” said U.S. Army Major General William Taylor.

Numerous reports said the U.S. strike and resulting explosions led to the deaths of several children — including ones as young as ages 2 and 3 — as well as members of the same family. Like the war itself, the Pentagon has long favored drone strikes to go after extremist targets. Human rights groups criticize those strikes for civilian casualties.

The U.S. military reported as many five rockets were fired at Kabul airport Monday and were thwarted by “force protection measures.”

Sunday’s drone strike and one earlier on Thursday were aimed at ISIS-K (an Islamic state offshoot group in Afghanistan) which the Pentagon said was responsible for bombings at the Kabul airport that killed 13 U.S. troops and 169 Afghans.

The Taliban fighters and the U.S. government announced Monday afternoon that the last American planes had left the Kabul airport.

The departures mark the end of an American war that started after the 9/11 attacks and was aimed at catching and killing Osama bin Laden and dismantling Al Qaeda footprint in the mountainous outpost.American forces uprooted the Taliban after the start of the war in 2001.

Bin Laden was killed by U.S. forces in 2011. The war stretched across four U.S. administrations.

An estimated 241,000 deaths occurred during the 20-year, $2 trillion war, according to Brown University estimates. Those deaths include Afghan civilians, police and military forces, U.S. troops and contractors and Taliban fighters.

The chaotic retreat from Afghanistan was sparked after the quick fall of the U.S.-backed government and military. The collapse mirrored the fall of Saigon at the end of the Vietnam War and came after Biden and other administration officials dismissed questions about a quick collapse.

Those miscalculations resulted in criticisms of Biden, the military and U.S. intelligence agencies. Biden has focused on his broader and more popular decision to end the war rather than criticisms of the exit — including miscalculations of Taliban takeover after the abrupt closures of air bases and the end of American intelligence and air support.

The end of the war saw the U.S. military cooperating with Taliban fighters to secure the airport. McKenzie complimented the Taliban for its cooperation and coordination in Kabul — surreal end that brought longtime enemies together.

Eric Rittnger, an associate professor of political science at Salisbury University, does not expect the U.S exit from Afghanistan and criticism of Biden’s handling of the situation to have long-term impacts on other American alliances.

Rittinger pointed to similar circumstances after the Vietnam War and the continued strength of alliances such as NATO.

There are also concerns about how the ruling Taliban and other Islamists will treat women, girls, religious minorities (including Christians) and political opponents with the American occupation over.

There have already been reports of Taliban fighters killing political opponents and those who worked for or with the U.S.

The U.S. government said there are approximately 250 Americans still in Afghanistan as well as Afghans worried about reprisals and authoritarian life under the Taliban. The Pentagon is transporting some Afghan refugees to bases in the U.S.

U.S. Sen. Ben Cardin, D-Md., said Monday the U.S. should work to get more Afghans out of the country. “We remain committed to our Afghan allies and partners, and will continue to work with this administration to ensure that they are evacuated. The U.S. has a moral responsibility to accept any Afghan seeking refuge that we can.” Cardin said.

Conservatives are critical of Biden’s exit from the war and are upset with the U.S. pullout and the Taliban’s takeover in Afghanistan.

“As expected, jihadist terror groups are pouring into the vast ungoverned spaces of Afghanistan,” said U.S. Sen. Marco Rubio, R-Fla. “It will soon be a terror wonderland, the worlds premiere safe haven for planning attacks against Americans & the homeland.” 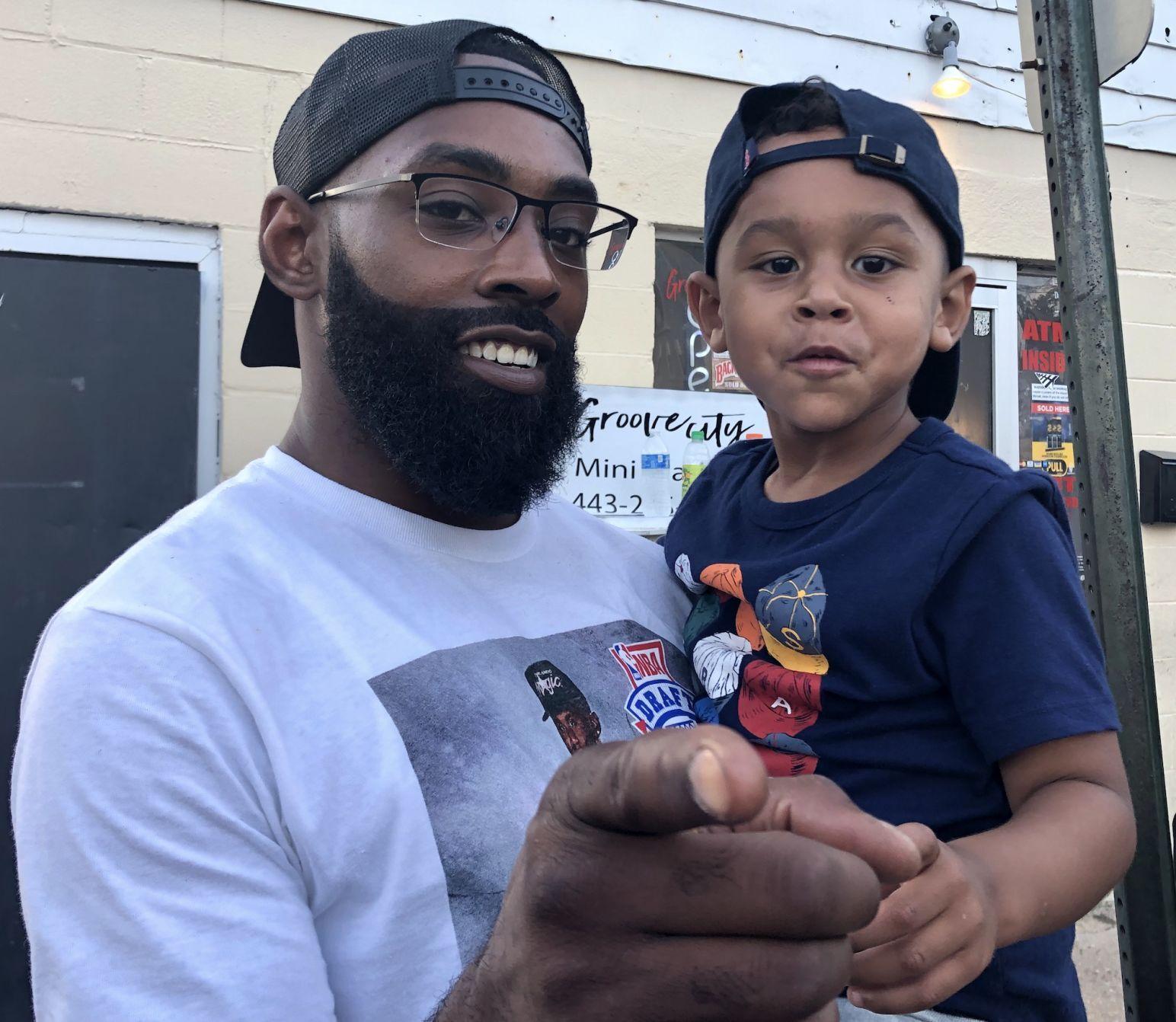 Two festival-goers and families having fun at the Groove Fest in Cambridge. Story on A3.

Dad and son at Groove Fest 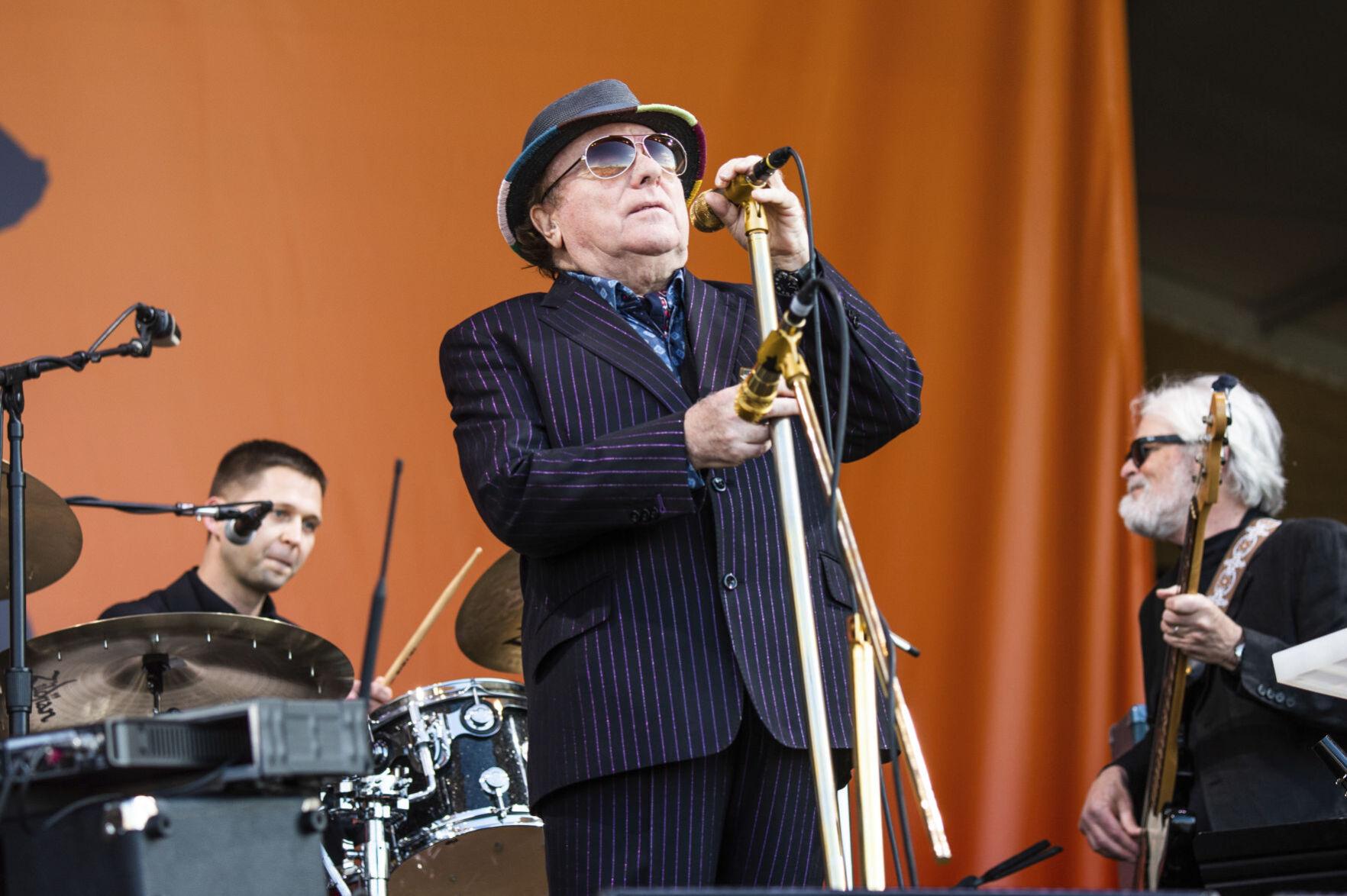