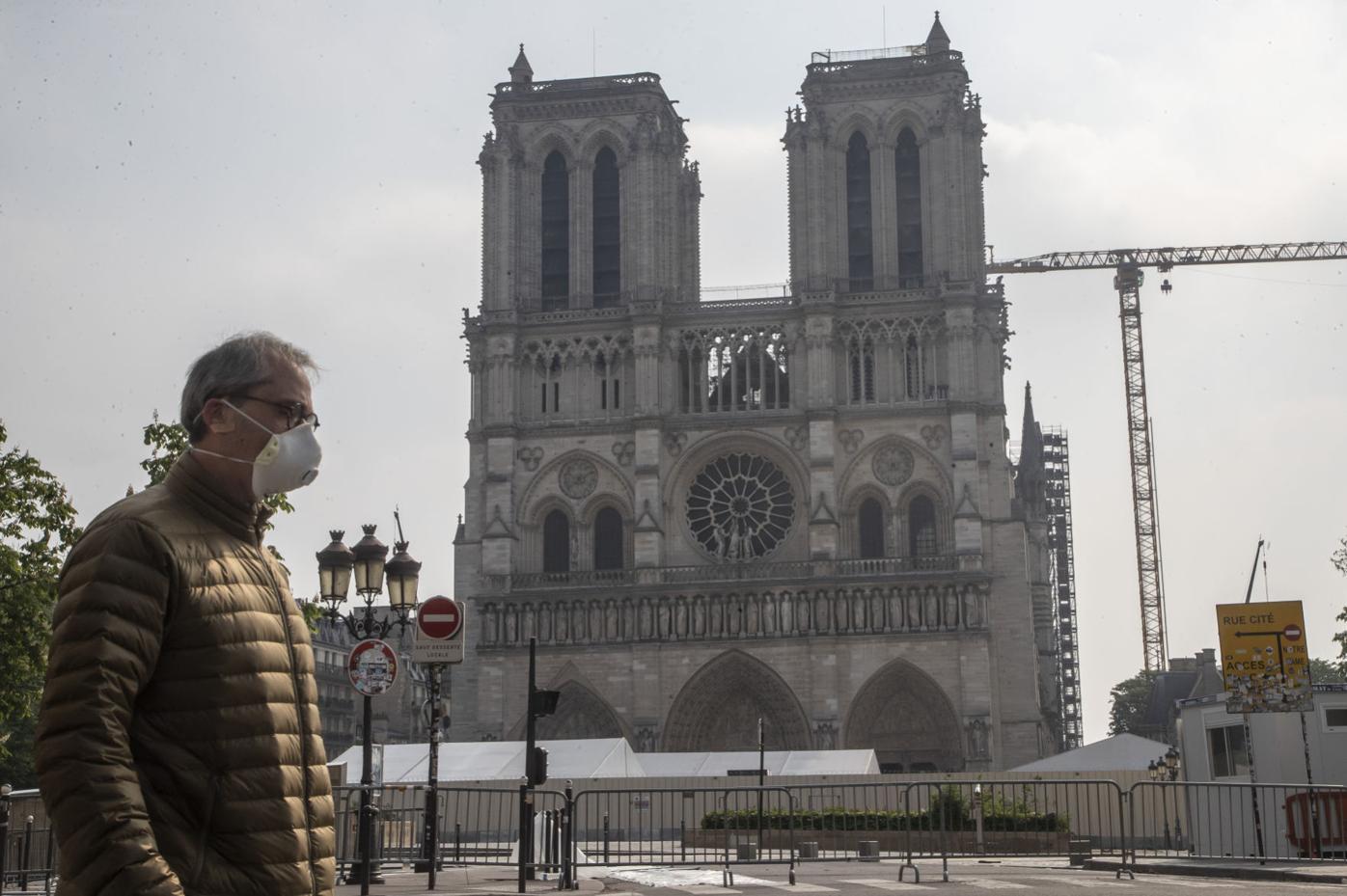 A man wears a mask to protect against the spread of the coronavirus as he walks past the Notre Dame cathedral in Paris, Monday, April 13, 2020. The reconstruction of the fire-devastated Notre Dame Cathedral a year ago on April 15, 2019, was suspended last month due to the coronavirus pandemic. 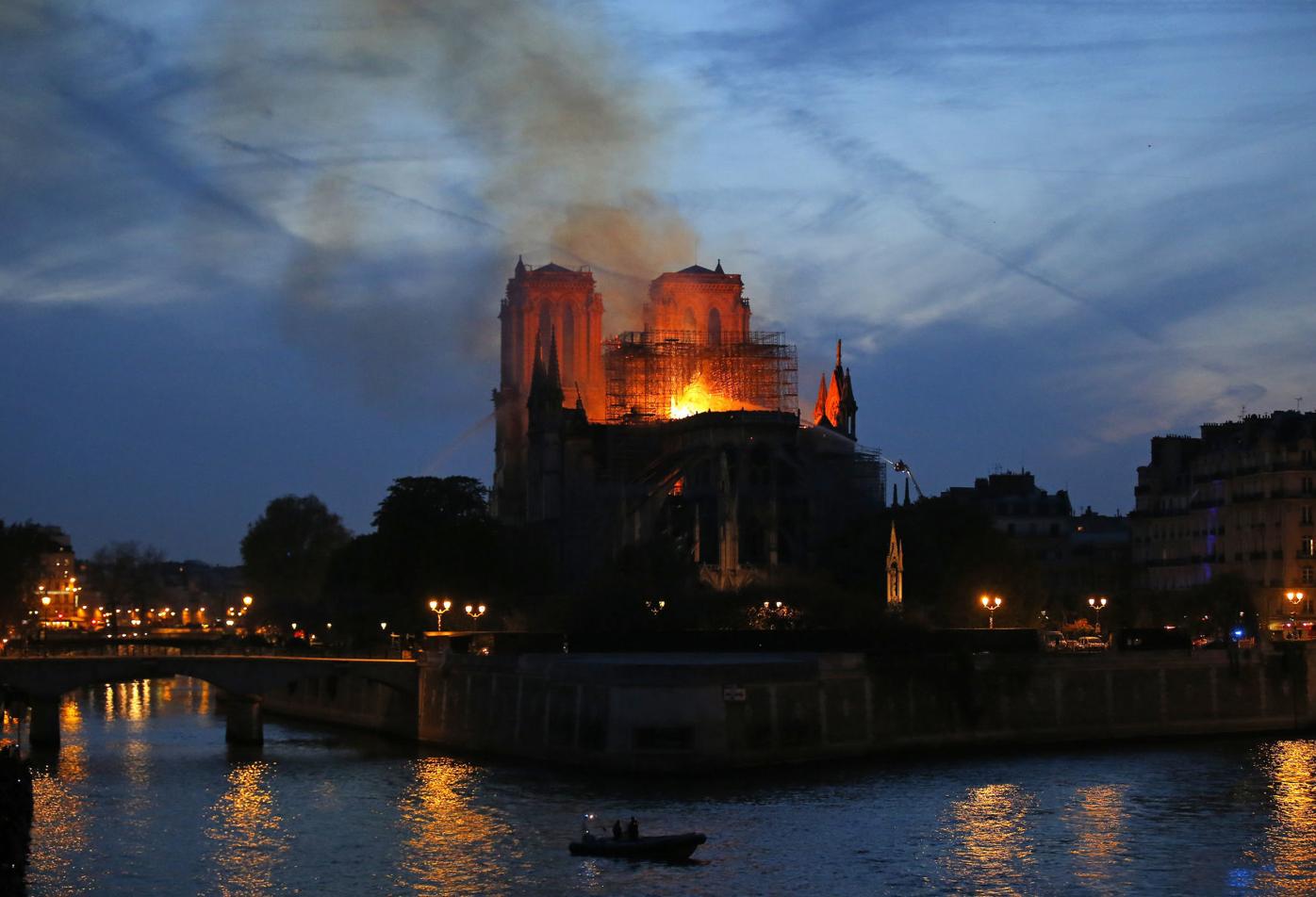 In this April 15, 2019, file photo, firefighters tackle the blaze as flames and smoke rise from Notre Dame cathedral in Paris. The cathedral stands crippled, locked in a dangerous web of twisted metal scaffolding one year after a cataclysmic fire gutted its interior, toppled its famous spire and horrified the world.

A man wears a mask to protect against the spread of the coronavirus as he walks past the Notre Dame cathedral in Paris, Monday, April 13, 2020. The reconstruction of the fire-devastated Notre Dame Cathedral a year ago on April 15, 2019, was suspended last month due to the coronavirus pandemic.

In this April 15, 2019, file photo, firefighters tackle the blaze as flames and smoke rise from Notre Dame cathedral in Paris. The cathedral stands crippled, locked in a dangerous web of twisted metal scaffolding one year after a cataclysmic fire gutted its interior, toppled its famous spire and horrified the world.

PARIS (AP) — Notre Dame Cathedral stands crippled and alone, locked in a dangerous web of warped scaffolding one year after a cataclysmic fire gutted its interior, toppled its famous spire and horrified the world.

Some of the 40,000 metal bars — erected for an earlier renovation project — melted in the intense blaze on April 15, 2019. The unstable scaffolding now endangers the Gothic jewel that for many embodies the soul of France.

The restoration of the landmark from the 12th and 13th centuries has been halted and the workers sent home because of France’s coronavirus lockdown that began March 17, thwarting plans to start removing the 250 tons of scaffolding.

So even Notre Dame has been left in isolation by the pandemic that has affected so many people across France.

The 13-ton bell in the south tower, named Emmanuel, that traditionally rings on solemn occasions will sound at 8 p.m. Wednesday, joining the nightly rounds of applause for overstretched health workers.

On Good Friday, Paris Archbishop Michel Aupetit led an exceptional but tiny gathering inside the church, at the foot of the huge golden cross that remains intact.

“Today, we stand in this half-fallen cathedral to say that life is still here,” Aupetit said in the televised ceremony.

The gathering in the fragile church was meant to raise the spirits of a nation in distress.

“The message of hope is especially important for our compatriots at a time when we are particularly affected by the coronavirus, which is sowing anguish and death,” the archbishop told reporters.

There was no Easter service and no formal plans to mark the anniversary of the fire. But the musicians of Notre Dame have created a virtual homage to their beloved cathedral with a performance from their homes of an extract of J.S. Bach’s “St. John Passion.”

“As long as we have this scaffolding around, there’s still sort of a 50% chance that more damage can be (caused) to the cathedral,” said Notre Dame chaplain Brice de Malherbe, who last year was evacuated from his home next door as flames engulfed the roof.

He recalled his worst moment that night: “When one had the impression that the fire was (subsiding) and suddenly it resumed in one of the towers.”

Yet, Notre Dame remained standing, still surveying the French capital from the island in the Seine, its two familiar bell towers partially eaten from within by flames but their heavy stones apparently only blackened on the outside.

French President Emmanuel Macron reiterated Wednesday his desire to see the cathedral reopen its giant doors in time for the 2024 Olympic Games in Paris.

“We will do everything to keep this deadline,” he said in a tweeted video, thanking firefighters and rescue workers for extinguishing the blaze and saving lives.

Notre Dame “is a symbol of our resilience, our capacity to overcome challenges and stand aright,” Macron said.

But progress has been delayed by setbacks, from the discovery of toxic dust from the melted lead roof and spire to the health and safety demands of the pandemic.

Officials hope the scaffolding can be removed by the fall. Then, stones must be analyzed to see which need to be replaced. Debris and huge ancient beams that burned like kindling must be cleared from the soaring vaults, Malherbe said. An umbrella structure will then be built to protect the site, which is now surrounded by high barricades.

For one fervent devotee of Notre Dame, the barricades, which replaced a smaller barrier, symbolize her loss, and the virus spreading across France and the world.

“Notre Dame is confined. I couldn’t throw a bouquet of flowers over to her,” said Cecile Deleville, who had tossed one over the lower fencing in December. “It’s as though they took that away, too.”

The 67-year-old retiree dared to take her first look at the cathedral a day after the fire, along with reporters from The Associated Press. She said at the time that she felt like an orphan.

Now, she fears she won’t see Notre Dame reborn in her lifetime. Deleville worries that the reconstruction will fall by the wayside as France tries to rebuild its economy once the virus crisis has been overcome.

Those in charge of returning Notre Dame to its original splendor are still at work, despite being locked down.

The cathedral “has been gravely injured, undeniably so,” Jean-Louis Georgelin, a retired army general appointed by Macron to head the restoration project, said in an interview with the Catholic publication Le Pelerin.

But it has resisted thermal shock from the fire, water from hoses that drenched it for days, the summer heat and high winds, he said, adding that sensors installed to read any movement of the structure have picked up nothing notable.

Donations large and small are helping to pay for the restoration, with 188 million euros received, Georgelin told the daily Le Parisien. Some 400 million euros ($437 million) have been promised by the Total oil company and French tycoons Francois Pinault and Bernard Arnault of the luxury giant LVMH. But it was the modest donations, mainly from people in France and the United States, that covered the initial costs.

On Wednesday, Germany offered to help rebuild some of the large clerestory windows located far above eye level. The German government said three glass-makers that conduct restoration work for cathedrals in Germany could offer “great expertise” to their French colleagues.

A timeline for the reconstruction may need to be redrawn to account for the virus lockdown. What also is unclear is what the new spire will look like. Will it be a copy of architect Eugene-Emmanuel Viollet-le-Duc’s 19th century creation in lead that soared 96 meters (315 feet) high, or be a contemporary version?

With Notre Dame still severely damaged, Deleville, the believer who lost her church, cannot muster a vision of the future.