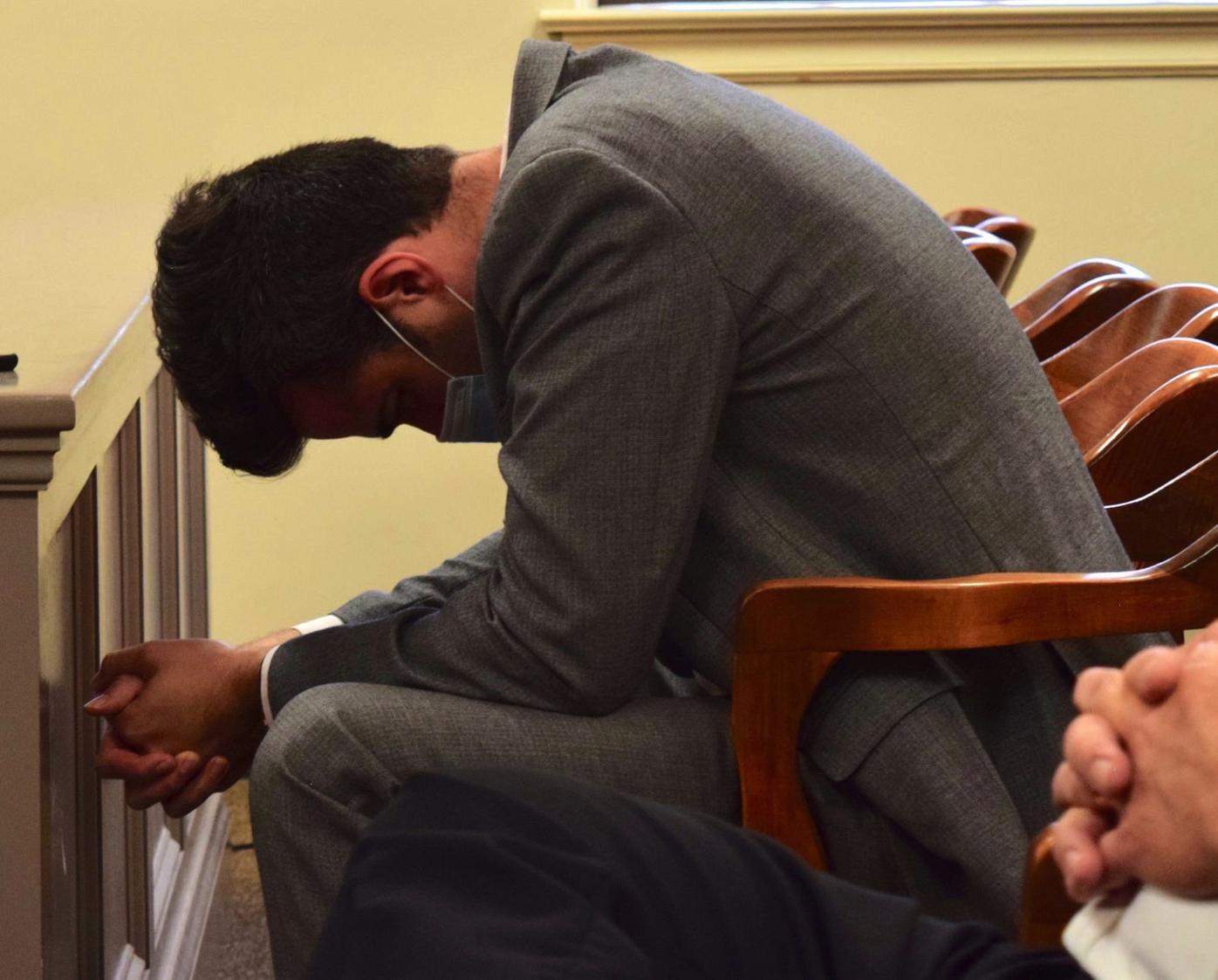 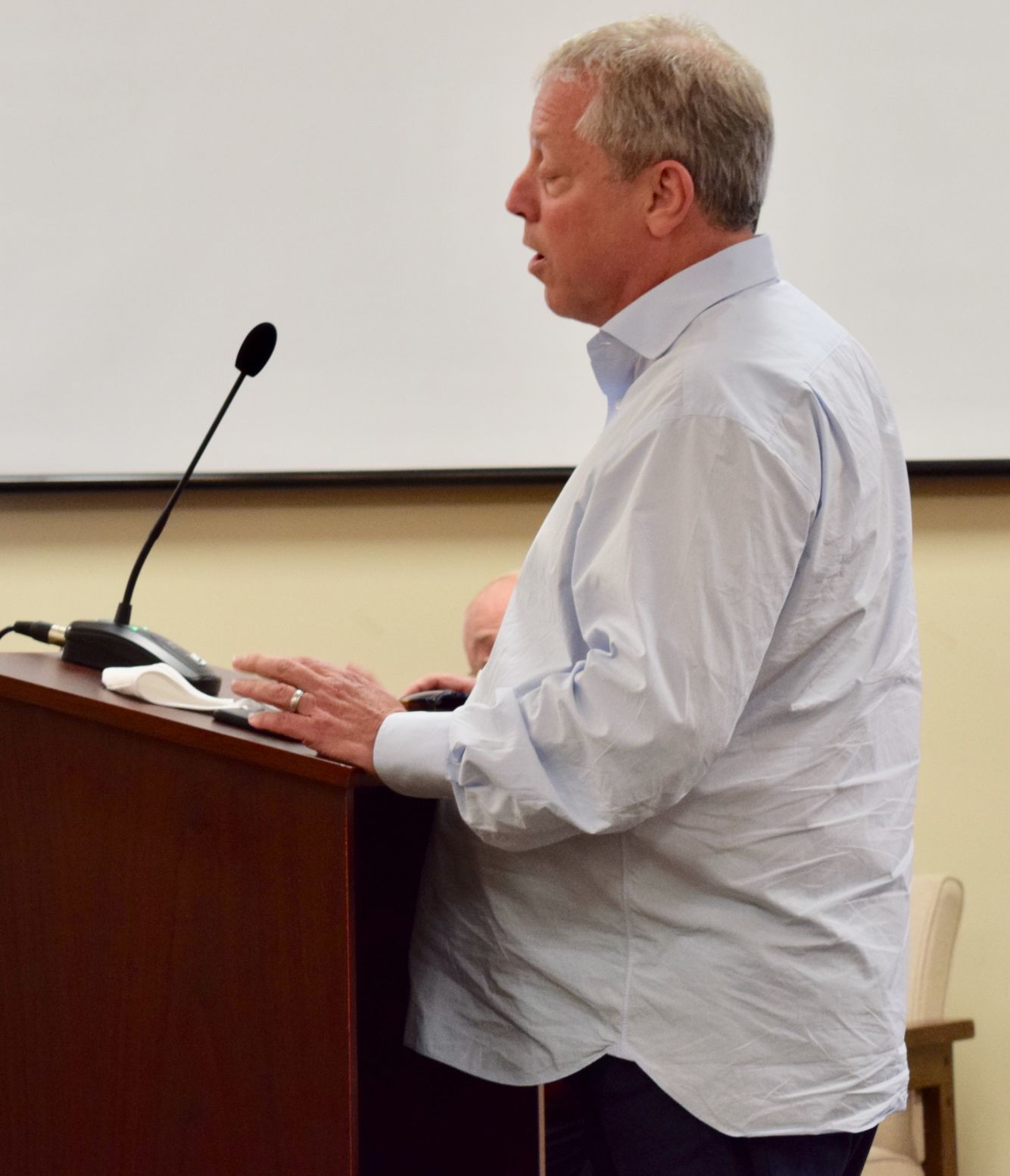 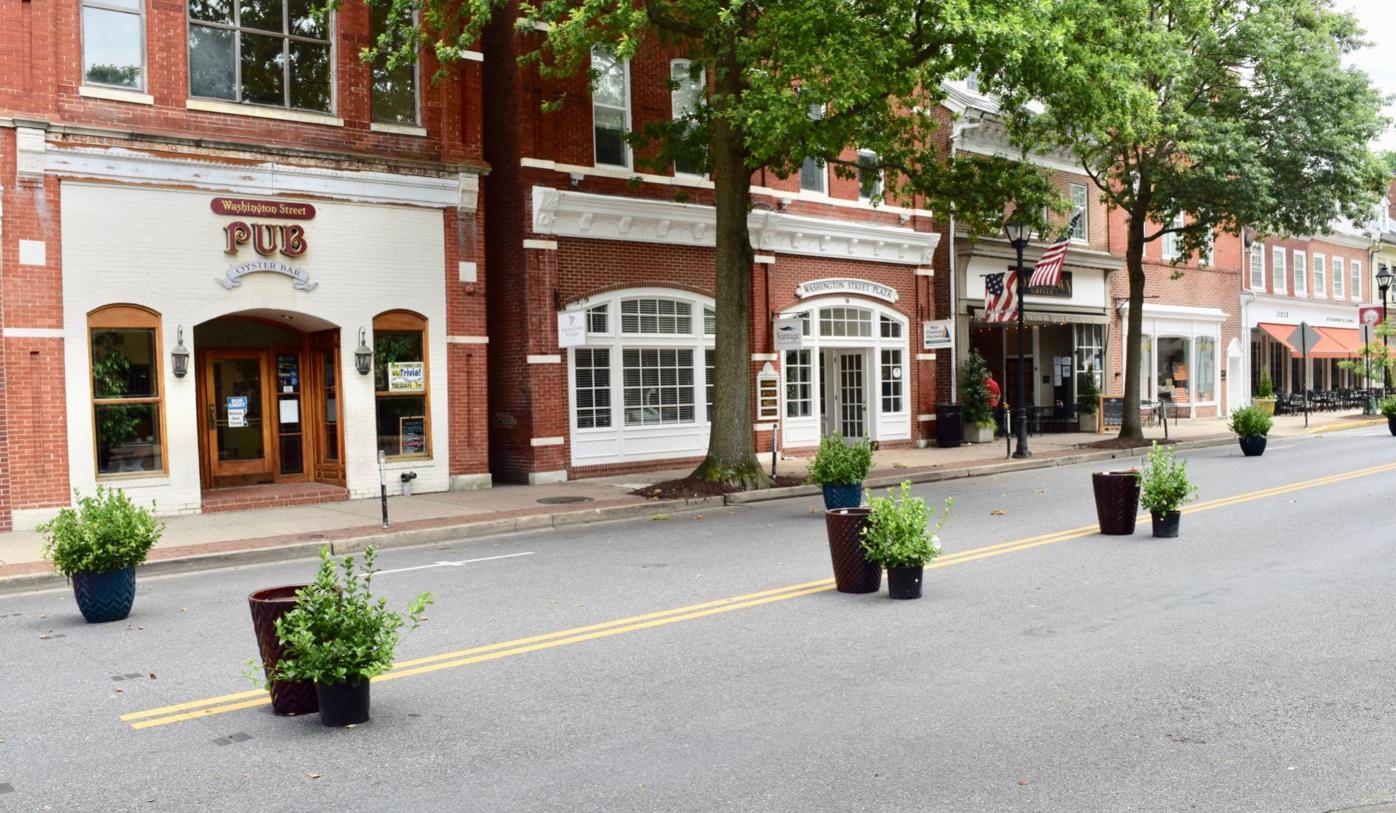 Washington Street was blocked off between Federal and Dover streets starting Monday, July 6, for the planned Washington Street Promenade, but the project was axed Wednesday by Easton Town Council.

Washington Street was blocked off between Federal and Dover streets starting Monday, July 6, for the planned Washington Street Promenade, but the project was axed Wednesday by the Easton Town Council. 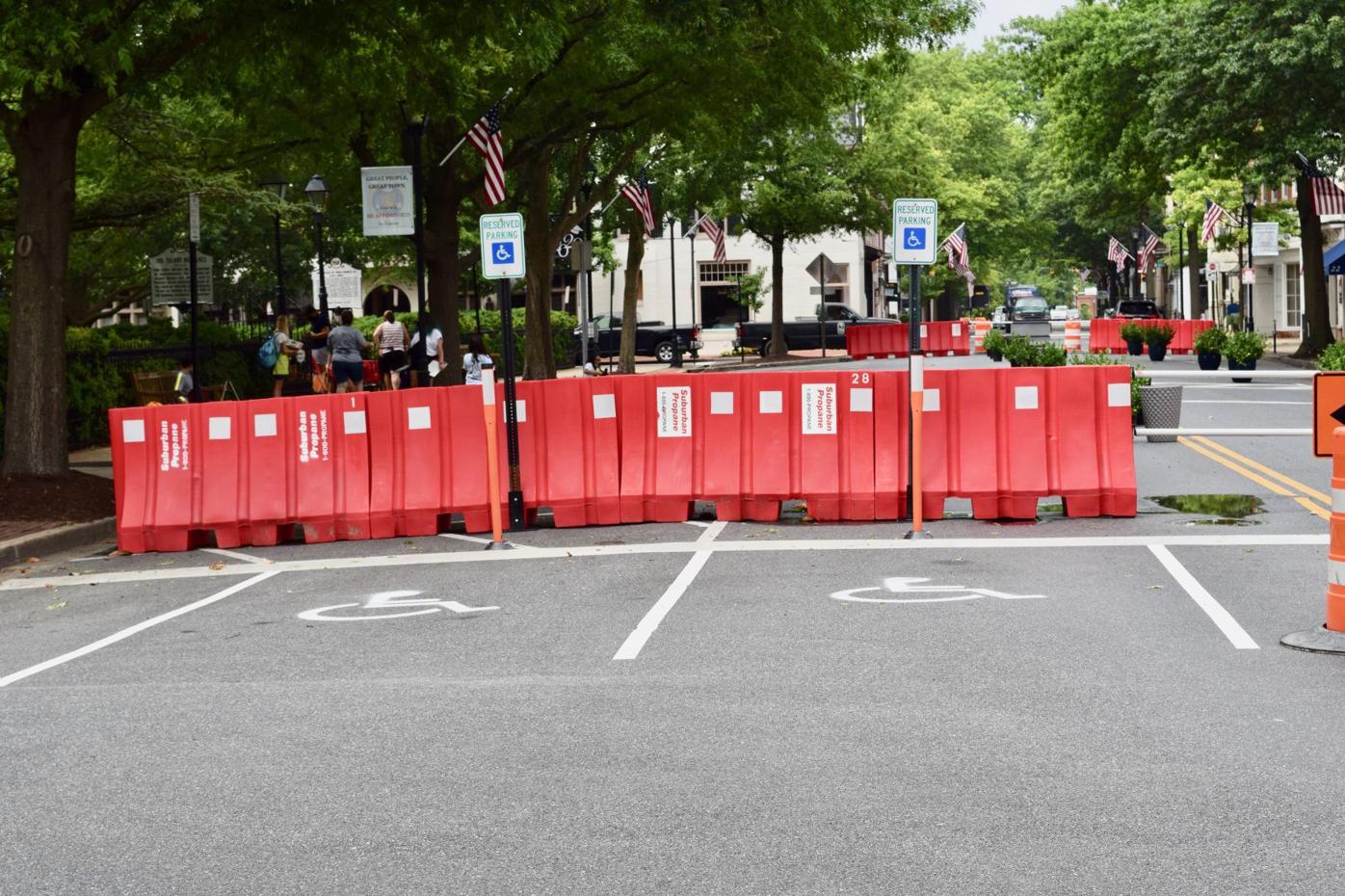 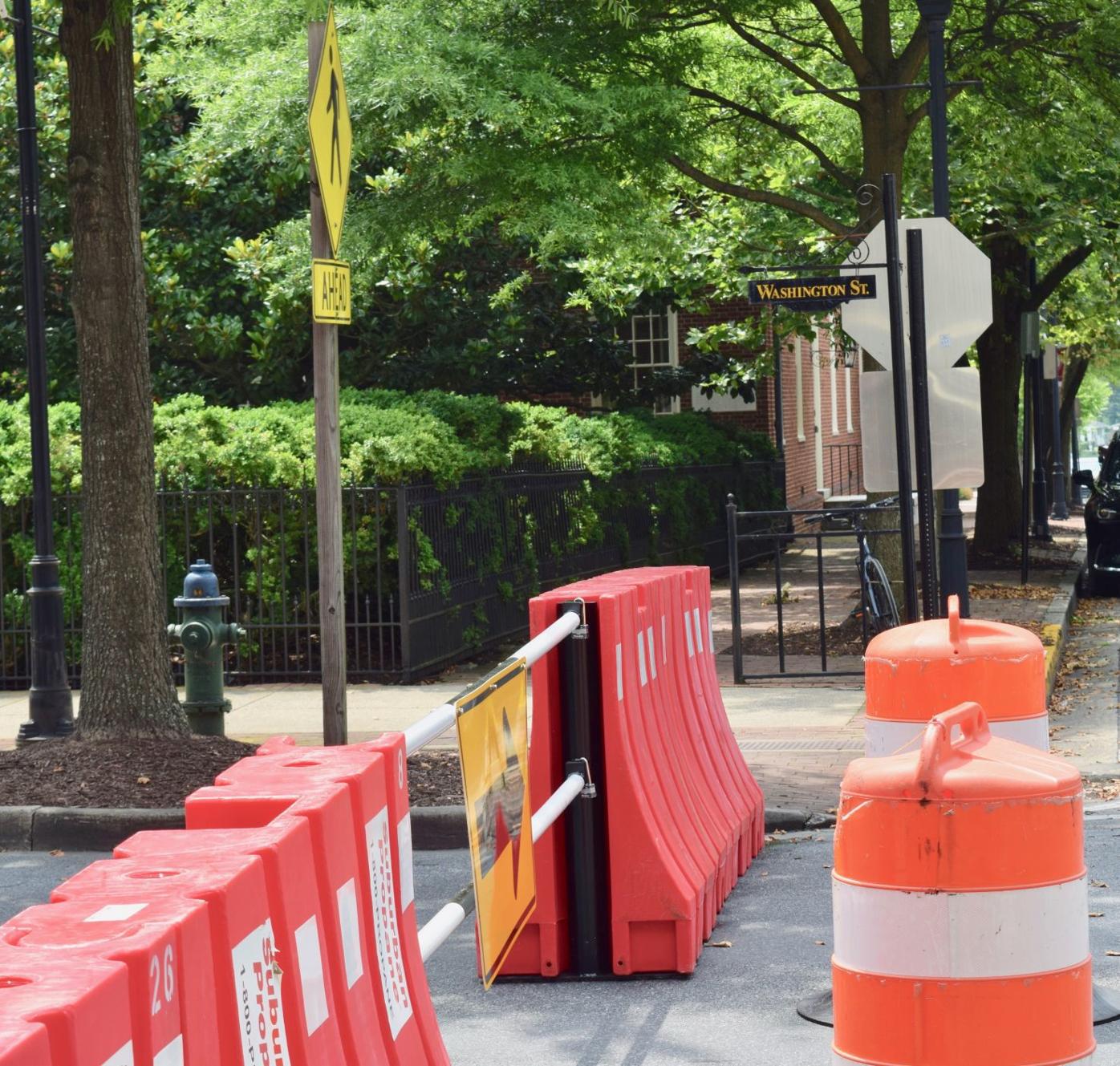 Washington Street was blocked off between Federal and Dover streets starting Monday, July 6, for the planned Washington Street Promenade, but the project was nixed Wednesday by the Easton Town Council. 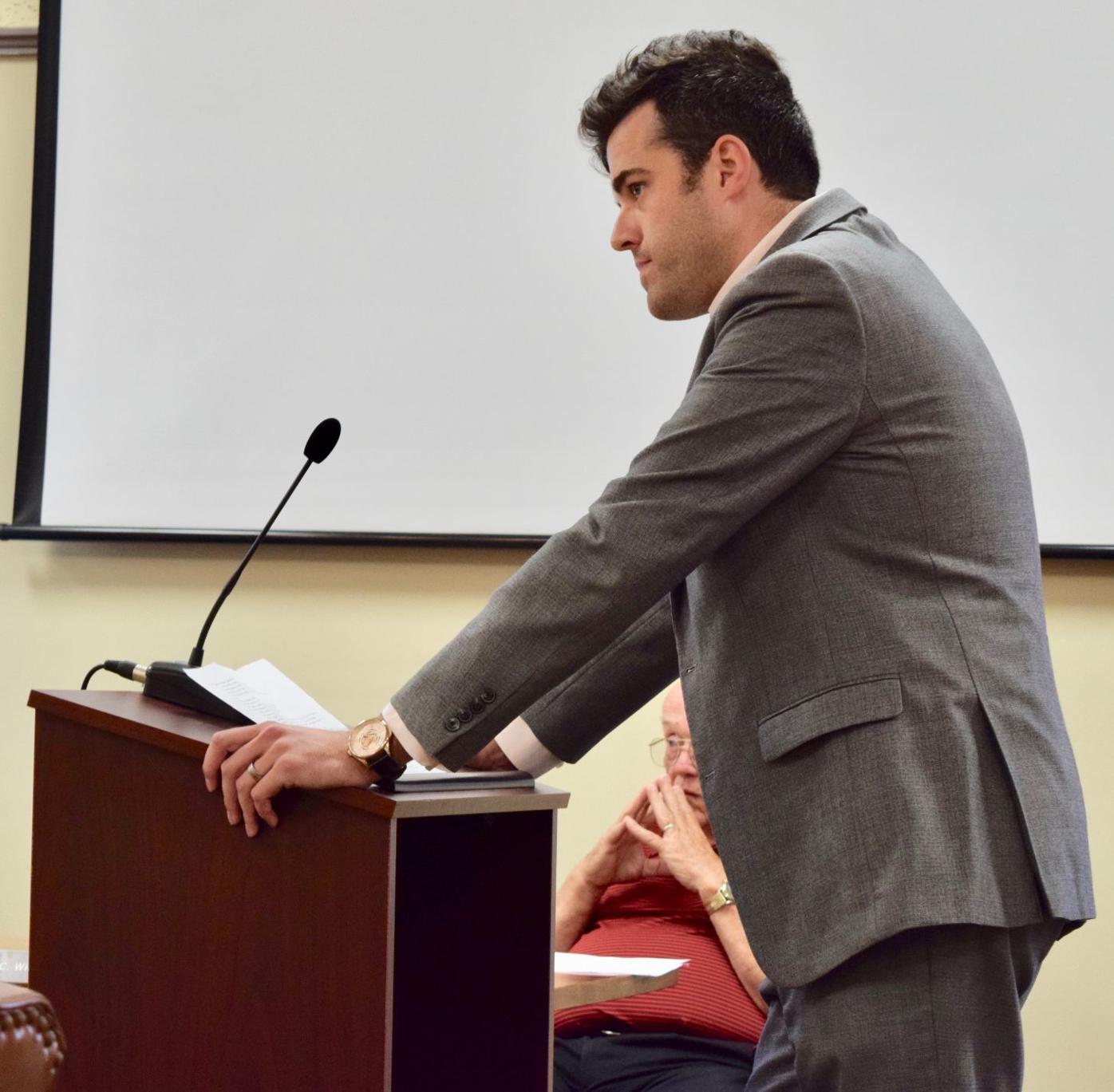 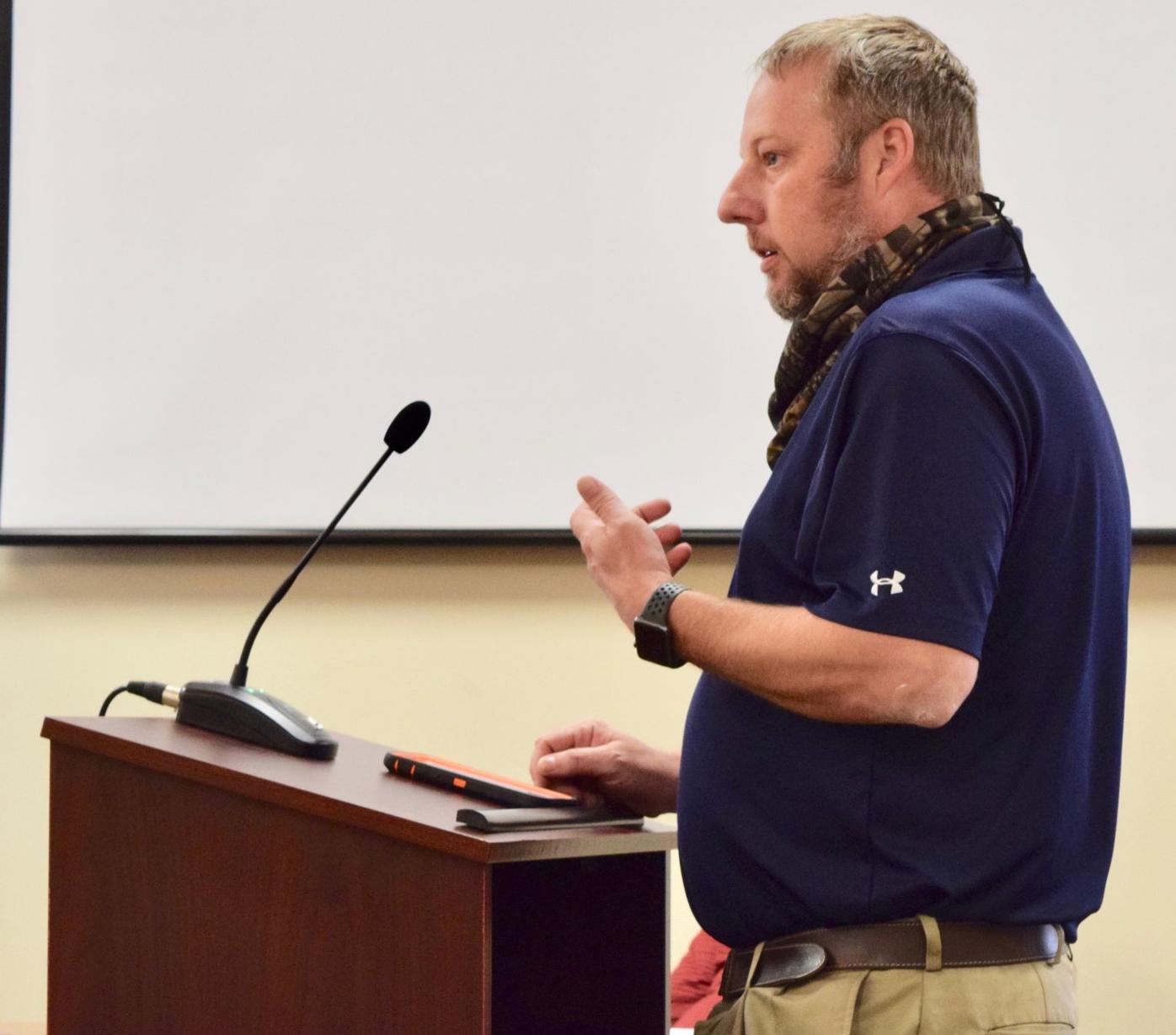 Washington Street was blocked off between Federal and Dover streets starting Monday, July 6, for the planned Washington Street Promenade, but the project was axed Wednesday by Easton Town Council.

Washington Street was blocked off between Federal and Dover streets starting Monday, July 6, for the planned Washington Street Promenade, but the project was axed Wednesday by the Easton Town Council.

Washington Street was blocked off between Federal and Dover streets starting Monday, July 6, for the planned Washington Street Promenade, but the project was nixed Wednesday by the Easton Town Council.

EASTON — After a contentious special Easton Town Council meeting Wednesday, July 8, the council voted to axe the planned Washington Street Promenade in Easton, for which barriers had already been set up ahead of its expected launch Thursday.

The barriers will be removed and the street reopened to vehicle traffic in the next few days. The council and Discover Easton will go back to the drawing board to find another way to help downtown businesses.

The project, which closed Washington Street between Federal and Dover streets, was discussed at the scheduled council meeting Monday, when the council instructed Discover Easton’s Ross Benincasa to step up communication about the plans.

Wednesday’s special meeting was called after some council members and Easton Mayor Robert Willey met with Paul Prager, CEO and chairman of Beowulf Energy and principal of Bluepoint Hospitality Group, on Tuesday. Prager expressed concerns about the Promenade and closing a busy section of Washington Street.

Benincasa said during the meeting that Prager also placed calls to Discover Easton on Tuesday, in which he threatened to cease all investments in Easton, close all of his businesses in the town, and stop supporting local non-profit efforts. Prager said he’d cite the Promenade as a reason.

Benincasa said Prager told the group he invests too much in this “expletive town.” The Star Democrat did not reach out to Prager for comment.

If Monday’s exchange was tense, the Wednesday meeting was even more impassioned.

Several local business owners spoke both for and against the Promenade. Another strong advocate of the project besides Benincasa was Doug Kirby, general manager of Washington Street Pub, one of three restaurants set to participate in the Promenade. He said Easton has needed more fun events downtown, things nearby towns such as St. Michaels and Cambridge have done.

Kirby described the downtown area as an entertainment district rather than a business district. He said he had already rented tables and purchased an extra $2,000 worth of food in preparation for increased traffic with the Promenade’s launch.

And he took exception to the plan being altered because of one person’s dissent.

“We’re negotiating with a terrorist,” Kirby said of Prager, who wasn’t present when the comment was made. “We don’t negotiate with terrorism.”

Prager arrived close to the end the meeting, just in time to speak before councilman Al Silverstein proposed a motion. Prager said he was disappointed that he was called a terrorist.

He expressed doubts that the Promenade would increase business the way Benincasa intended. He said there wasn’t enough evidence supporting business traffic increases to justify closing down a main thoroughway. He said he’s witnessed an ambulance forced to take a longer route to the hospital since the street was closed.

Prager added that although the Promenade could benefit Washington Street Pub, Doc’s Downtown Grille and Scossa Restaurant & Lounge, it could negatively impact other businesses in the area. He said he spoke with owners of the nearby jewelry shop (Shearer the Jeweler) and real estate firm (Benson and Mangold Real Estate), who both opposed the Promenade.

“We need to get into the science of what we’re trying to achieve so you, working for us, can balance risk versus reward,” Prager told the council.

Prager then went after the council. He said the leaders didn’t do the necessary due diligence in planning the Promenade nor show the care and thoughtfulness required of public officials. He told the council to “stop wasting our money and time doing things that don’t make sense.”

“If you want to create a promenade in town, just think about it. But don’t veil it as, ‘We’re saving the world because we’re all hit by this pandemic,’” Prager told the council. “You went about it all the wrong way without any of the preparation that any good executive would exercise.”

“If you’re going to advantage two to three businesses and disadvantage others and the community, I think that’s wrong and don’t think it’s lawful, either,” Prager said.

Discover Easton had multiple partners lined up for the Promenade, including Garden Treasures and The Country School. Garden Treasures outfitted barriers for outdoor dining spaces for restaurants in the zone, and The Country School provided a stage for events. Plans were in progress for live music on Thursday, Friday and Saturday nights, as well as family nights on Wednesdays with dinner and a movie.

Early in Wednesday’s meeting, Benincasa acknowledged Prager’s influence and impact, and said he knows Prager closing his businesses would have a negative impact on the downtown area.

But he said closing the Promenade would set a bad precedent, and that local businesses and organizations that anticipated the spike in traffic would be upset.

As the meeting progressed and the Promenade’s future was in doubt, Benincasa committed to finding a solution to help local businesses, even if the Promenade was scrapped.

“We’re not going to walk away from the table if the council is set on changing things,” Benincasa said. “I would love to see Washington Street, continue, but if not, we will be at the table tomorrow to see what we can do.”

Silverstein said he went to the area and attempted to park in the spaces. He determined pulling out of the spaces was dangerous, as little room was left behind the spaces before drivers would pull into oncoming traffic.

He acknowledged his previous vote in favor of the plan and said he wanted to correct his mistake.

“I think we rushed this. I think due diligence wasn’t done. I don’t think it makes the downtown a better place,” Silverstein said. “I don’t think the way this is coming about is right, and we need to remove those barricades and open the street up.”

Easton Police Chief David Spencer, who was consulted in the early planning stages of the idea, said the police felt the Promenade created safety and traffic flow issues. They had felt that way all along, he said.

Closing Washington between Federal and Dover wasn’t always the plan. Originally, three other options were discussed:

Capt. Gregory Wright, deputy chief of Easton Police Department, said all three options presented logistical concerns about staffing and protecting people. He added that closing only the northbound lane of Washington between Dover and Federal was discussed, but the resulting decision was to close the whole block.

In all plans, the streets were originally only closed from Thursdays through Saturdays. Benincasa said that would have required outsized financial commitments and too much manpower to move the barriers back and forth.

Kirby was frustrated by the prevailing attitude that closing Washington is significant when it’s shut down for multiple parades every year, the annual Waterfowl festival, and even a recent Black Lives Matter protest. But Jones asserted there’s a big difference between those temporary closures and the permanent closure the Promenade was slated for.

Silverstein made a motion to remove the barriers, reopen Washington Street and meet with merchants to find other ways to assist them that didn’t involve closing Washington. Councilman Don Abbatiello seconded the motion, and councilman Ron Engle voted in favor to seal the decision.

Silverstein said the town should try to compensate restaurants such as Washington Street Pub that spent money ahead of the Promenade’s launch, and reaffirmed the council wants to help local businesses.

“All I want to do is make sure that we get everybody, especially property owners and business owners, in a room to sit down and talk about creative solutions,” he said.

Everyone should step back and remember we are in the middle of a pandemic, why on earth would we want to enable gatherings? I understand the need for more business, everyone has paid the price and then some. However, Talbot county has seen a recent spike in cases, according to Dr. Fredia Wadley, Talbot County Health Officer, are due to “a result of safety precautions not being followed as reopening has begun, family gatherings, and people taking trips to places such as the beach.” You are basically turning the area into a boardwalk and I'm sure we would have people not following the social distancing guidelines.

Mr. Pragar is not a true citizen of the county then. What he is doing is wrong, on so many levels it scream of the same derisive elitism that current drives national politics. He believes his money gives him rights other citizens do not have.The county council is basically rewarding him for destroying other local businesses and using his philanthropy as way to black mail the citizens of talbot county. That is the most disgusting thing I have heard. We should all do our part by boycotting his businesses, and we should vote in other council members.If the council can be swayed by the rejection of one less than upsatnding member of the community over money(black mail) then we have a void in character and leadership that must be addresed. Shame on the council for this decision.

Canceling this is a surprise. Places like Burlington, VT did this a long time ago and ALL the businesses in that pedestrian area seem to have done very well.....and this was only seasonal in Easton. So what put the bee in one person's bonnet?