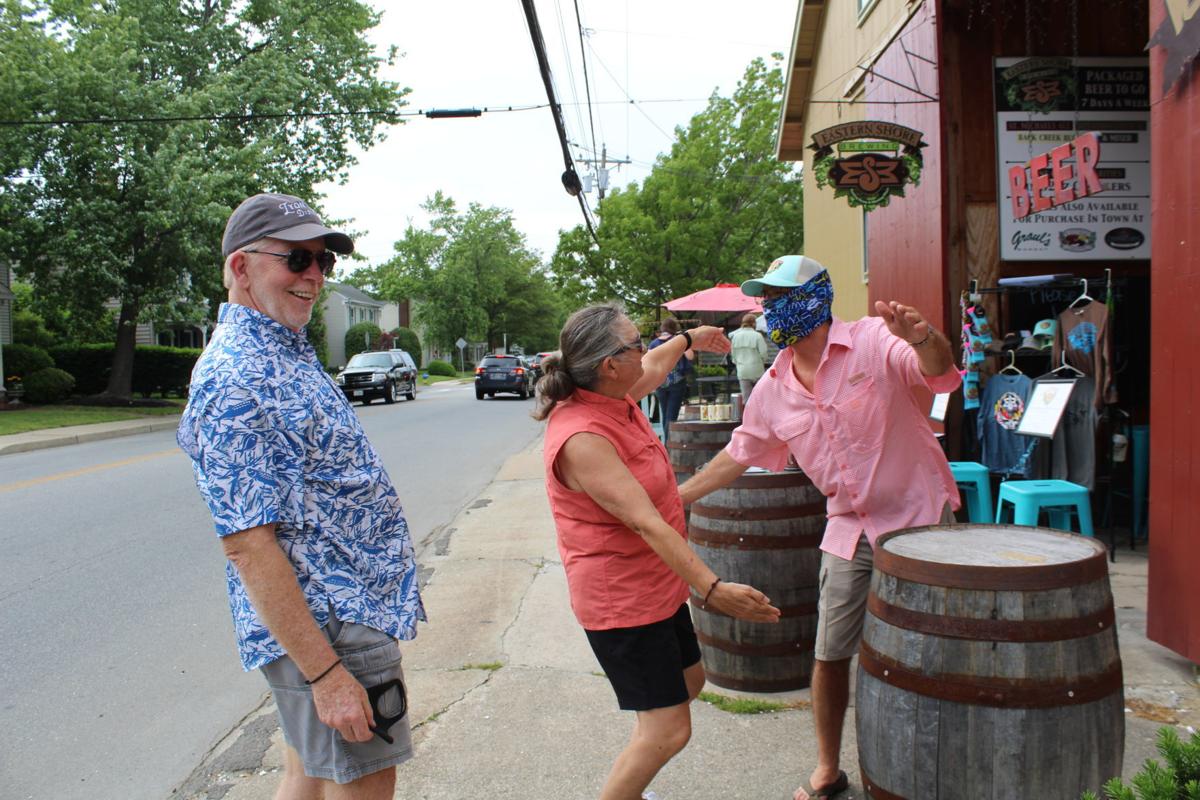 Greeting each other with an “air hug” at Eastern Shore Brewing Company in St. Michaels are proprietor Adrian “Ace” Moritz, right, and Cindy Reichart of Wittman. Russ McNair of Wittman looks on. 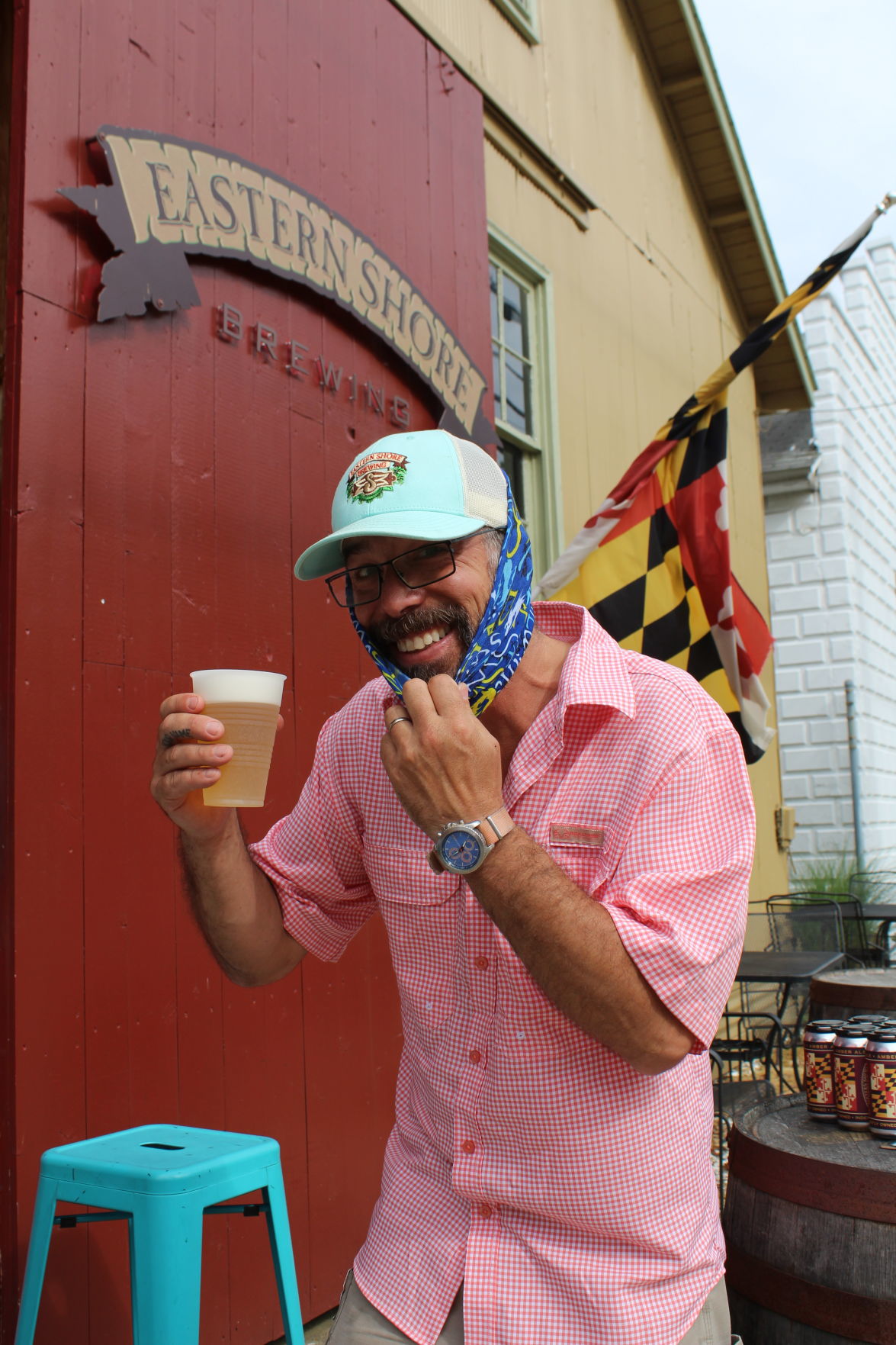 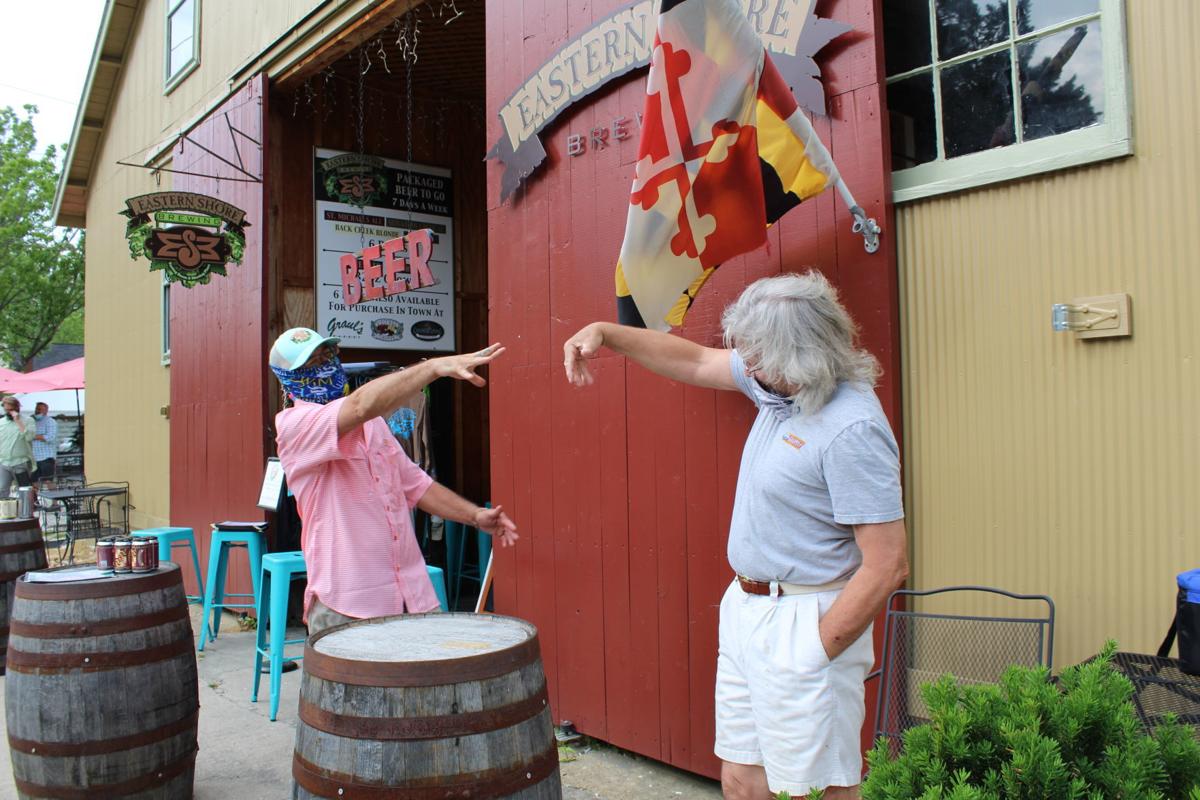 Just after 5 p.m. on Friday, May 29, Ace Moritz, left, owner of Eastern Shore Brewing Company in St. Michaels, “air” fist-bumped Mike Eline as they celebrated the reopening of brewery for patrons to enjoy their beer outdoors.

Greeting each other with an “air hug” at Eastern Shore Brewing Company in St. Michaels are proprietor Adrian “Ace” Moritz, right, and Cindy Reichart of Wittman. Russ McNair of Wittman looks on.

Just after 5 p.m. on Friday, May 29, Ace Moritz, left, owner of Eastern Shore Brewing Company in St. Michaels, “air” fist-bumped Mike Eline as they celebrated the reopening of brewery for patrons to enjoy their beer outdoors.

ST. MICHAELS — After more than two months, longtime patrons Russ McNair and Cindy Reichart of Wittman finally were able to enjoy their favorite suds at their Friday night hangout.

They know exactly when they last hung out at the Eastern Shore Brewing Company on Talbot Street in St. Michaels. It was March 14.

As a Friday night regular, McNair said he understood the limitations imposed by the coronavirus pandemic, but he “couldn’t wait” for the oldest brewery on the Eastern Shore to reopen.

Just before 5 p.m., proprietor Adrian “Ace” Moritz, wearing half a neck gator over his face, announced, “Guys, we have one minute and then we are drinking beer outside.”

They all had Gov. Larry Hogan to thank for allowing them to wet their whistles outdoors among friends.

On Friday, May 29, Hogan’s office released the news that he had issued two additional COVID-19 emergency orders. One allows breweries, wineries and distilleries to provide service in outdoor seating areas as of 5 p.m. that day, and that the same businesses could ship directly to customers. The other order extends a prohibition on utility shutoffs and residential late fees.

Reopening his brewery to sit-down customers has been “a long push,” Moritz said. “I’m not sure everybody was ready for it. Having two days’ notice was tough, but it’s better than anything else right now.”

“It’s great. I’m super happy for all the people in town,” he said before being interrupted by another grateful customer.

Moritz prepared by placing chairs more than 6 feet apart, buying single-use plastic cups and setting up an outdoor handwashing station. “I believe it’s the only one in town right now, available for the public, not just our customers,” he said. The extra cost is worth it, he said.

“Being a brewery, we’re already super well-suited because we have a sanitization process for brewing,” Moritz said.

Hogan’s order also allows third-party shipment of alcohol products to consumers by common carriers, such as FedEx or UPS.

Jaime Windon, president of the Maryland Distillers Guild and producer of Lyon Rum around the corner from Eastern Shore Brewing in St. Michaels, said the ability to ship will benefit her business.

“Demand for shipment has been intense, and this order allows the industry to be nimble and meet the market where it has evolved,” Windon said. “This is a new lifeline for sales.”

Maryland residents are using home delivery and shipping services more than ever during this time, according to a press release from Grow and Fortify, a trade organization representing the Maryland craft alcohol industry.

“Neighboring states have proven that this serves to satisfy consumer demand while being regulated to ensure compliance with all alcohol service and delivery rules,” the release stated.

Judy Crow, co-owner of Crow Vineyards in Kennedyville and president of the Maryland Wineries Association, noted that wineries have been shipping since 2011.

“The industry supports this announcement and is grateful for Gov. Hogan’s thoughtful and steady leadership to support the craft alcohol industry,” Crow said.

Windon Distilling has been conducting curbside sales and home deliveries since March 15. No one has been allowed in the building “to preserve the integrity” of the hand sanitizer manufacturing operations of the distillery, which can legally be allowed to continue until the end of the year.

Serving patrons at tables in or out of doors has never been part of the Windon’s operations, and she hasn’t applied for the cocktail permit the Talbot County Council allowed for shortly before the pandemic shut-down.

Windon said she is “very excited” about direct-to-consumer shipping of the distillery’s products throughout Maryland.

“All the kinks aren’t ironed out yet, but that’s something we’re really looking forward to because when you talk about balancing the desire to make sales while keeping both your customers and your staff safe and healthy, direct-to-consumer shipping is by far the safest option,” Windon said.

Serving his customers safely is uppermost on Moritz’s mind, too.