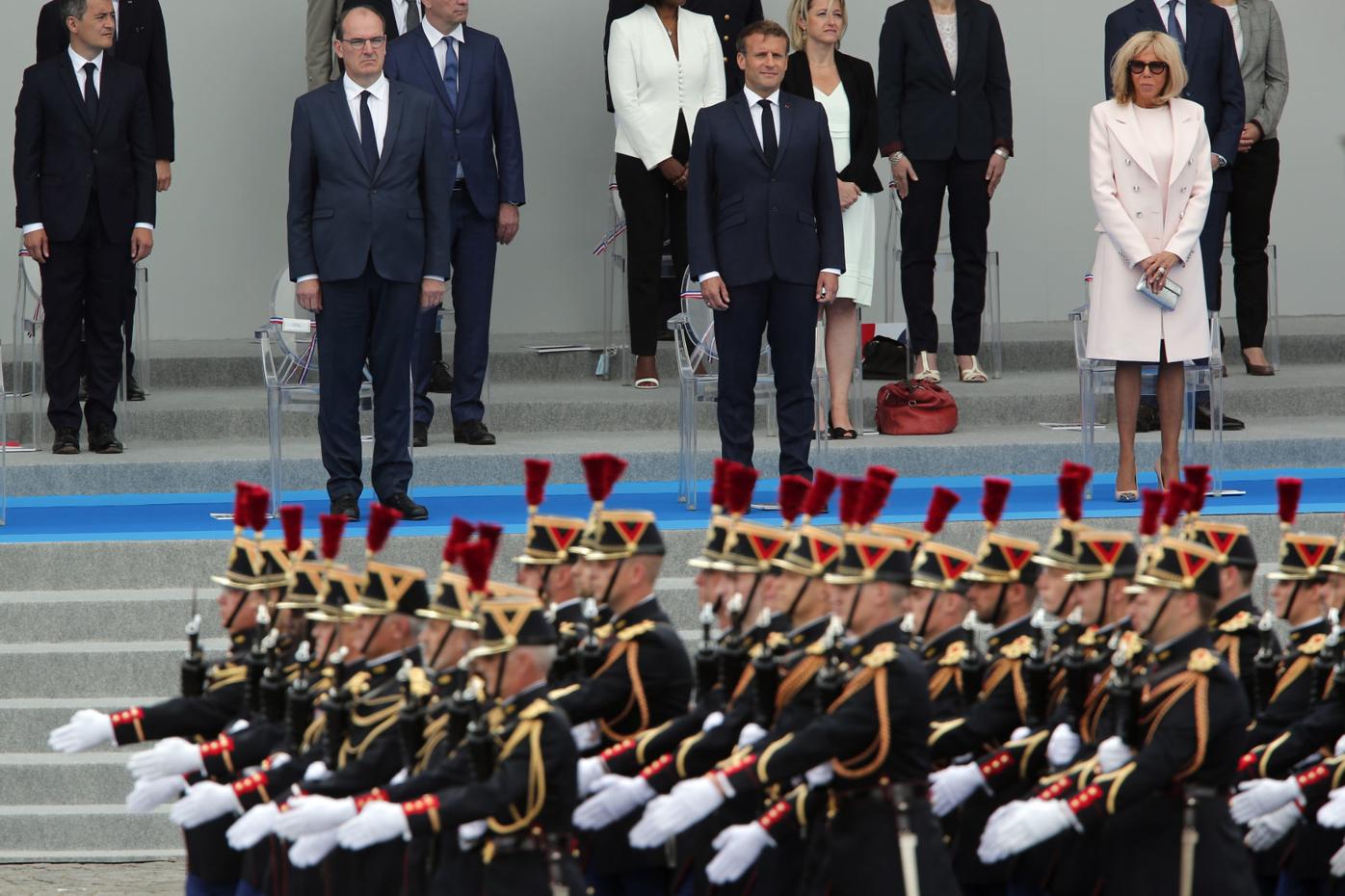 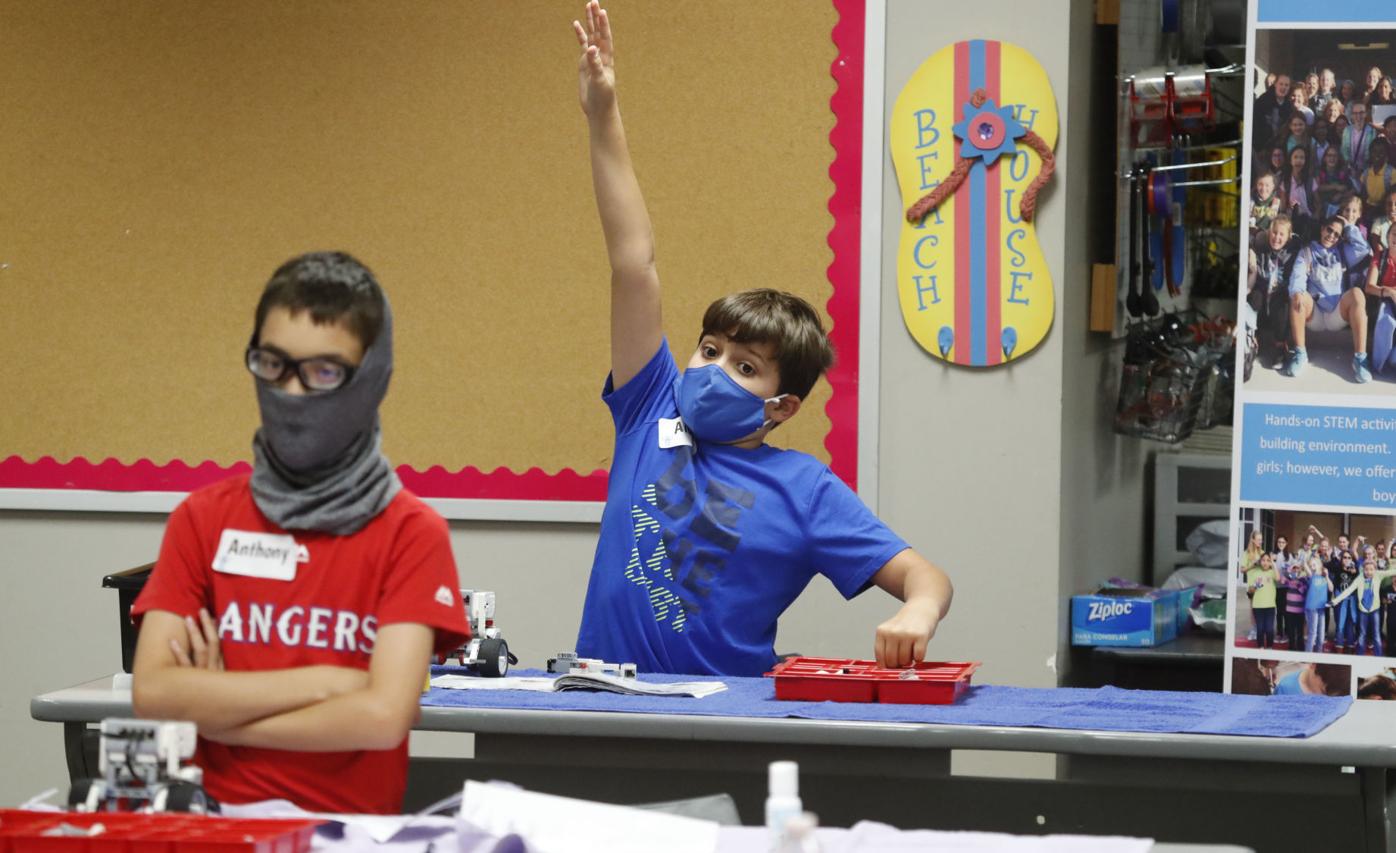 Amid concerns of the spread of COVID-19, Aiden Trabucco, right, wears a mask as he raises his hand to answer a question behind Anthony Gonzales during a summer STEM camp at Wylie High School Tuesday, July 14, 2020, in Wylie, Texas.

Amid concerns of the spread of COVID-19, Aiden Trabucco, right, wears a mask as he raises his hand to answer a question behind Anthony Gonzales during a summer STEM camp at Wylie High School Tuesday, July 14, 2020, in Wylie, Texas.

FORT LAUDERDALE (AP) — Florida surpassed its daily record for coronavirus deaths Tuesday and Britain and France announced a requirement for people to wear masks in public indoor spaces, amid rising global worries about a resurgence of the pandemic.

Florida reported 132 additional deaths, topping the previous record for the state set just last week. The figure likely includes deaths from the past weekend that had not been previously reported.

With the virus spreading quickly in the southern and western U.S., one of the country’s top public health officials offered conflicting theories about what is driving the outbreak.

“We tried to give states guidance on how to reopen safely. ...If you look critically, few states actually followed that guidance,” Dr. Robert Redfield, the director of the Centers for Disease Control and Prevention said Tuesday in a livestream interview with the editor of the Journal of the American Medical Association.

Redfield said people in many states did not adopt social distancing and other measures because they hadn’t previously experienced an outbreak. But he went on to say, without explanation, that he didn’t believe the way those states handled reopening was necessarily behind the explosive rise in virus cases. He offered a theory that infected travelers from elsewhere in the country might have brought the virus with them around Memorial Day.

CDC officials said that there are various possible explanations, and that Redfield was offering just one.

In Florida, the new deaths raised the state’s seven-day average to 81 per day, more than double the figure of two weeks ago and now the second-highest in the United States behind Texas. Doctors have predicted a surge in deaths as Florida’s daily reported cases have gone from about 2,000 a day a month ago to a daily average of about 11,000, including a record 15,000 on Sunday. The state recorded 9,194 new cases Tuesday.

Marlyn Hoilette, a nurse who spent four months working in the COVID-19 unit of her Florida hospital until testing positive recently, said hospitals are so desperate for staff to return to work they are not following guidelines that call for two negative tests first.

“Nurses are getting sick, nursing assistants are getting sick and my biggest fear is that it seems we want to return folks to work even without a negative test,” said Hoilette, who works at Palms West Hospital in Loxahatchee. Florida. “It’s just a matter of time before you wipe the other staff out if you’re contagious, so that is a big problem.”

The state, which became a virus hot spot after Gov. Doug Ducey relaxed stay-at-home orders and other restrictions in May, reported 3,517 patients hospitalized because of the disease, a record high. Arizona’s death toll from COVID-19 rose to 2,337, with 92 additional deaths reported Tuesday.

“At this critical juncture when COVID-19 is resurging, broad adoption of cloth face coverings is a civic duty, a small sacrifice reliant on a highly effective low-tech solution that can help turn the tide,” he and two colleagues wrote, in an editorial published online Tuesday by the journal of the American Medical Association.

In Britain, officials announced they will require people to wear face masks starting July 24, after weeks of dismissing their value.

“We are not out of the woods yet, so let us all do our utmost to keep this virus cornered and enjoy summer safely,” British Health Secretary Matt Hancock told lawmakers in the House of Commons.

French President Emmanuel Macron said masks will be required by Aug. 1, after recent rave parties and widespread backsliding on social distancing raised concerns the virus may be starting to rebound.

Even Melania Trump, whose husband President Donald Trump resisted wearing a mask or urging anyone else to do so, called on people to step up precautions.

“Even in the summer months, please remember to wear face coverings & practice social distancing,” she said Tuesday in a posting on her Twitter account. “The more precaution we take now can mean a healthier & safer country in the Fall.”

Meanwhile, officials in the Australian state of Queensland said those breaking quarantine rules could face up to six months in jail.

With higher fines and the threat of jail time, “I hope that will demonstrate to the public just how serious we are about enforcing these measures,” Queensland Deputy Premier Steven Miles said.

Queensland shut its state borders to successfully contain the coronavirus outbreak, but reopened to all but residents of Victoria, Australia’s worst affected region, two weeks ago.

The city of Melbourne in Victoria recorded 270 new coronavirus infections overnight, with more than 4,000 cases now active across the state. Melbourne is one week into a six-week lockdown in an attempt to stop a spike in new cases there.

In Thailand, where there have been no reports of locally transmitted cases for seven weeks, authorities have revised rules governing visitors from abroad after a breakdown in screening led to two infected foreigners posing a possible risk to public health.

The government said Tuesday that diplomats will be asked to stay in state-supervised quarantine for 14 days, instead of self-isolating. And it is postponing the recently allowed entry of some foreign visitors so procedures can be changed.

India, which has the third-most cases after the U.S. and Brazil, was rapidly nearing 1 million cases with a jump of more than 28,000 reported Tuesday. It now has more than 906,000 and accumulated more than 100,000 in just four days.

The ebb and flow of the pandemic has governments scrambling to quash new outbreaks while attempting to salvage economies from the devastation of long shutdowns and travel restrictions.

In the U.S., flaring outbreaks have led officials in some areas to mandate mask wearing and close down bars and some other businesses to once again try to bring the pandemic under control.

Hawaii’s governor pushed back by another month plans to waive a 14-day quarantine requirement for out-of-state travelers who test negative for COVID-19.

The state has one of the lowest infection rates in the U.S., with 1,243 cases. Its quarantine requirement has virtually shut down tourism since it took effect in late March, pushing the unemployment rate in the islands to 22.6%, the second-highest in the U.S.

Geller reported from New York. Associated Press reporters from around the world contributed.