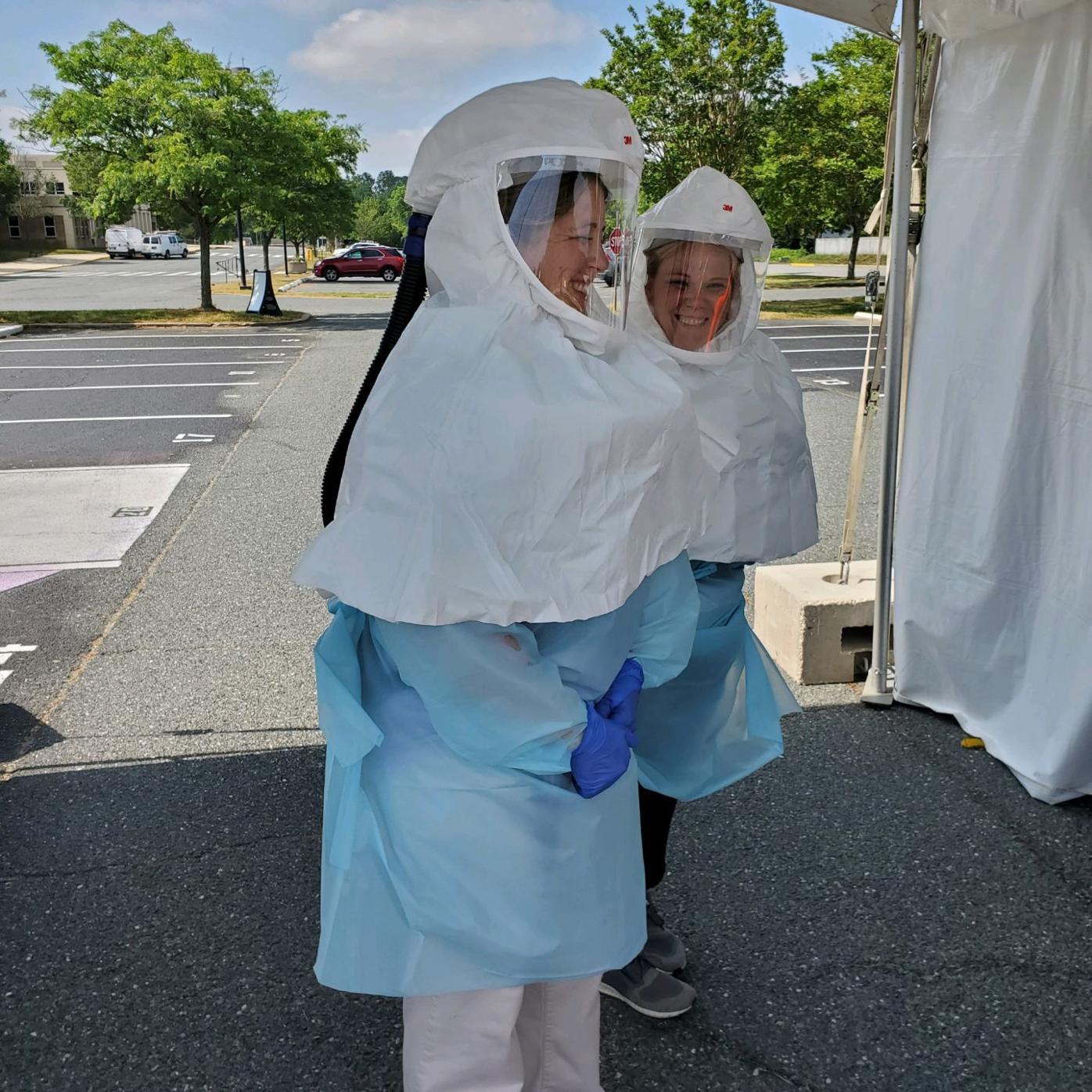 Demand for coronavirus tests in Talbot County saw a significant increase last week as the number of confirmed cases in the county continues to rise. Pictured are test site operators at the Easton High School drive-through site. 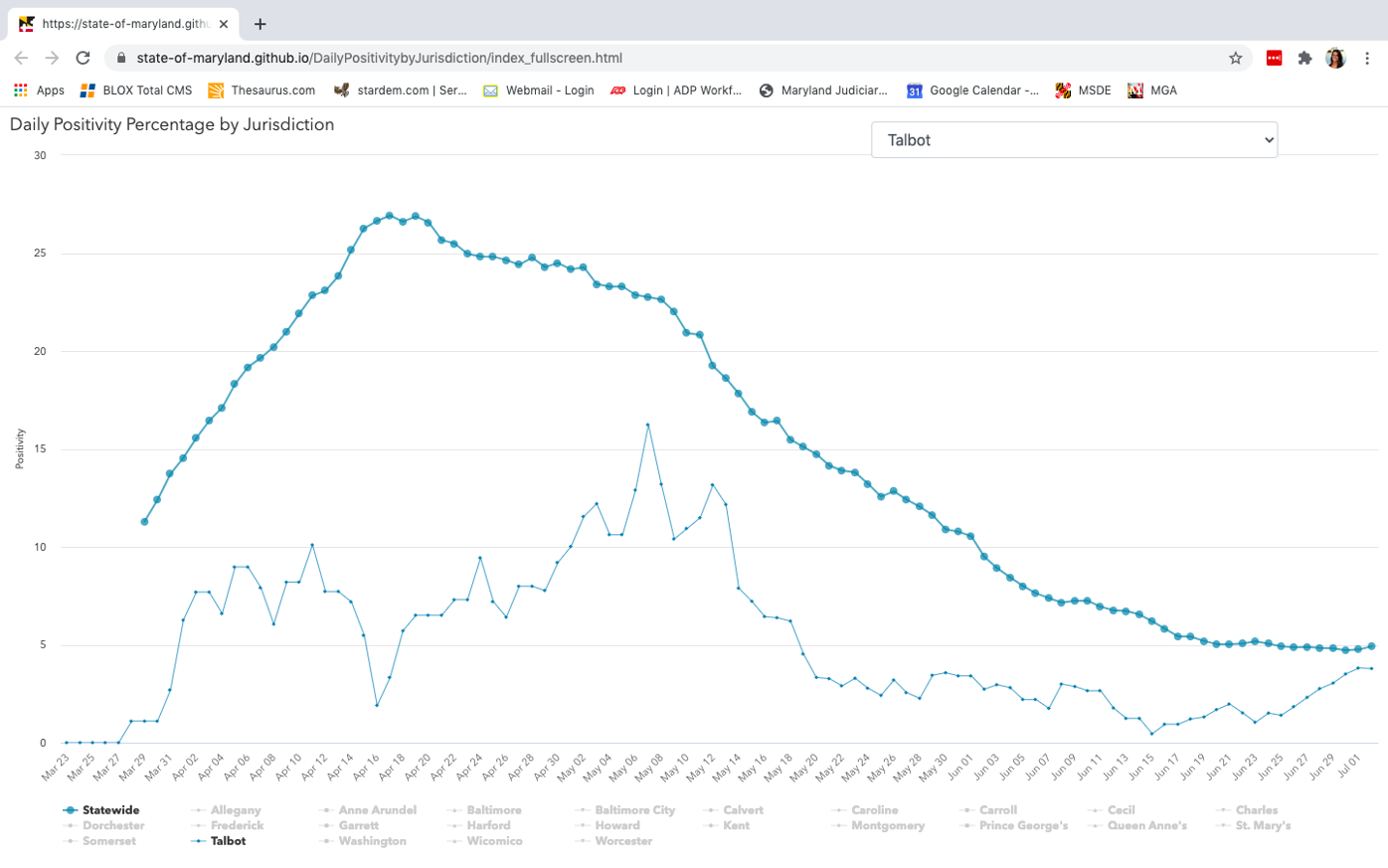 Talbot County’s coronavirus testing positivity rate continues to climb, reaching 3.8% as of Thursday, July 2, up from its lowest point of 0.5% a little more than two weeks ago on June 15. Pictured is data from the Maryland Department of Health depicting Talbot’s positivity rate (the dotted line) alongside that of the state’s.

Demand for coronavirus tests in Talbot County saw a significant increase last week as the number of confirmed cases in the county continues to rise. Pictured are test site operators at the Easton High School drive-through site.

Talbot County’s coronavirus testing positivity rate continues to climb, reaching 3.8% as of Thursday, July 2, up from its lowest point of 0.5% a little more than two weeks ago on June 15. Pictured is data from the Maryland Department of Health depicting Talbot’s positivity rate (the dotted line) alongside that of the state’s.

Since the EHS drive-through test site opened Monday, June 8, it has provided roughly 640 coronavirus tests to Talbot County residents in its 12 days of operation, according to Talbot Health Officer Dr. Fredia Wadley.

By Friday, July 3, Talbot had tested 10.9% of its population, which makes the county the eighth most-tested in the state among Maryland’s 24 jurisdictions.

While the results from the most recent tests won’t come back until at least a few days, the county’s ascending positivity rate — which saw a steady climb from 3.0% on June 29 to 3.8% on July 2 — could indicate the county is in for another week of rising case numbers.

As was reported in The Star Democrat Tuesday, June 30, Talbot saw its largest number of confirmed cases within a seven-day span to date, with 21 new cases being reported between Monday, June 22, and Monday, June 29.

Wadley said Friday the county had added 13 more cases since June 29. The health officer called the double-digit rise within five days a “significant increase” for the county.

The total tally for Talbot as of Friday was 144 confirmed cases and four deaths, according to state data.

Hospitalizations related to the virus at the Shore Medical Center at Easton have remained in the single digits, Wadley said, citing data from Ken Kozel, UM Shore Regional president and CEO.

Despite the county’s preparedness for what appears to be a steady spike in cases, Wadley voiced concern for July 4 gatherings — during which, she acknowledged, many people inevitably would not be taking health safety precautions.

She said her department, through its contact tracing efforts, was able to attribute many of the county’s most recently confirmed positive cases to person-to-person transmission.

The health officer cited increased social gatherings and beach outings, and people dodging health safety measures during such activities, as a main contributor to the increase.

“The July 4th weekend is a significant concern for Talbot County and the Eastern Shore,” Wadley said. “Talbot County is already seeing our largest number of cases per two-week period, and over the weekend Talbot County will have three fireworks events that will attract people from surrounding areas that are not allowing these events.”

Although many people are taking the recommended precautions, such as wearing a face covering and maintaining a safe physical distance, Wadley said “too many are pretending that this pandemic is over.”

“Unfortunately, we have a long way to go before this pandemic is over,” she said. “Without an effective vaccine or treatment the only things we have to fight this virus are masks, social distancing and good hand hygiene.”

“No one likes to wear a mask because they are uncomfortable,” she said. “But the wearers of masks send a message that they care enough about the people around them to bear a little discomfort to decrease the spread of COVID-19.”

The health officer urged Talbot residents to make an appointment to get tested for the coronavirus if they, or someone with whom they live, have taken a commercial flight, attended a large social gathering, or visited a crowded beach or boardwalk during the past two weeks.

“It is not just where you have been but also where everyone within six feet of you over the past two weeks have been that increases your risk for the infection — especially if no one was wearing a facial covering,” Wadley has said.

The Talbot County Health Department’s testing site at the Easton High School is open from 10 a.m. until 2 p.m. on Monday, Wednesday and Thursday.

Tests are exclusive to Talbot residents and by appointment only. The turnaround time for test results ranges from 48 hours to five days, depending on the locations collected specimens are sent for processing.