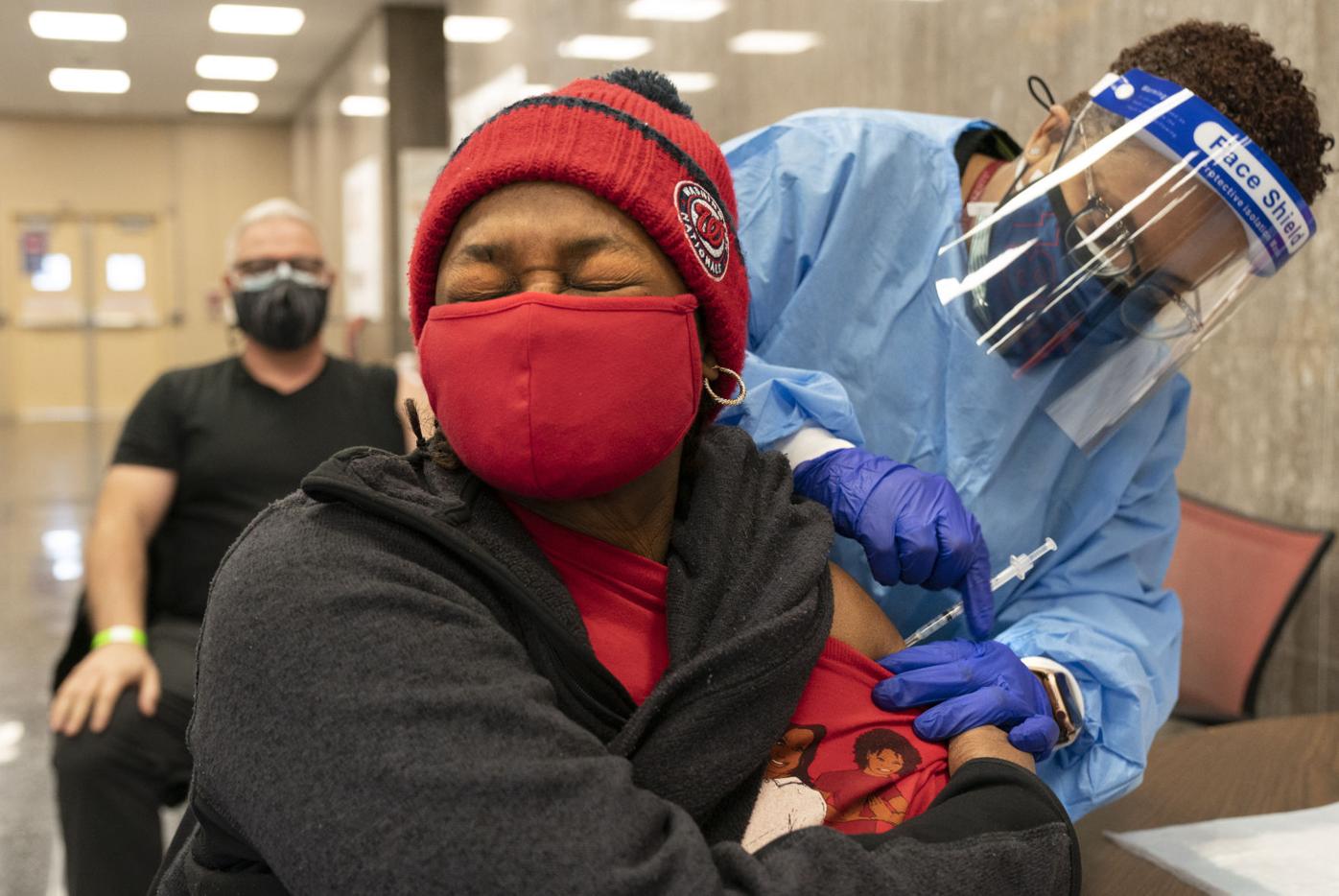 In this Thursday, Feb. 11, 2021, photo Jorie Winbish, 56, of Washington, reacts as she receives her second dose of the COVID-19 vaccine at a clinic at Howard University, in Washington. 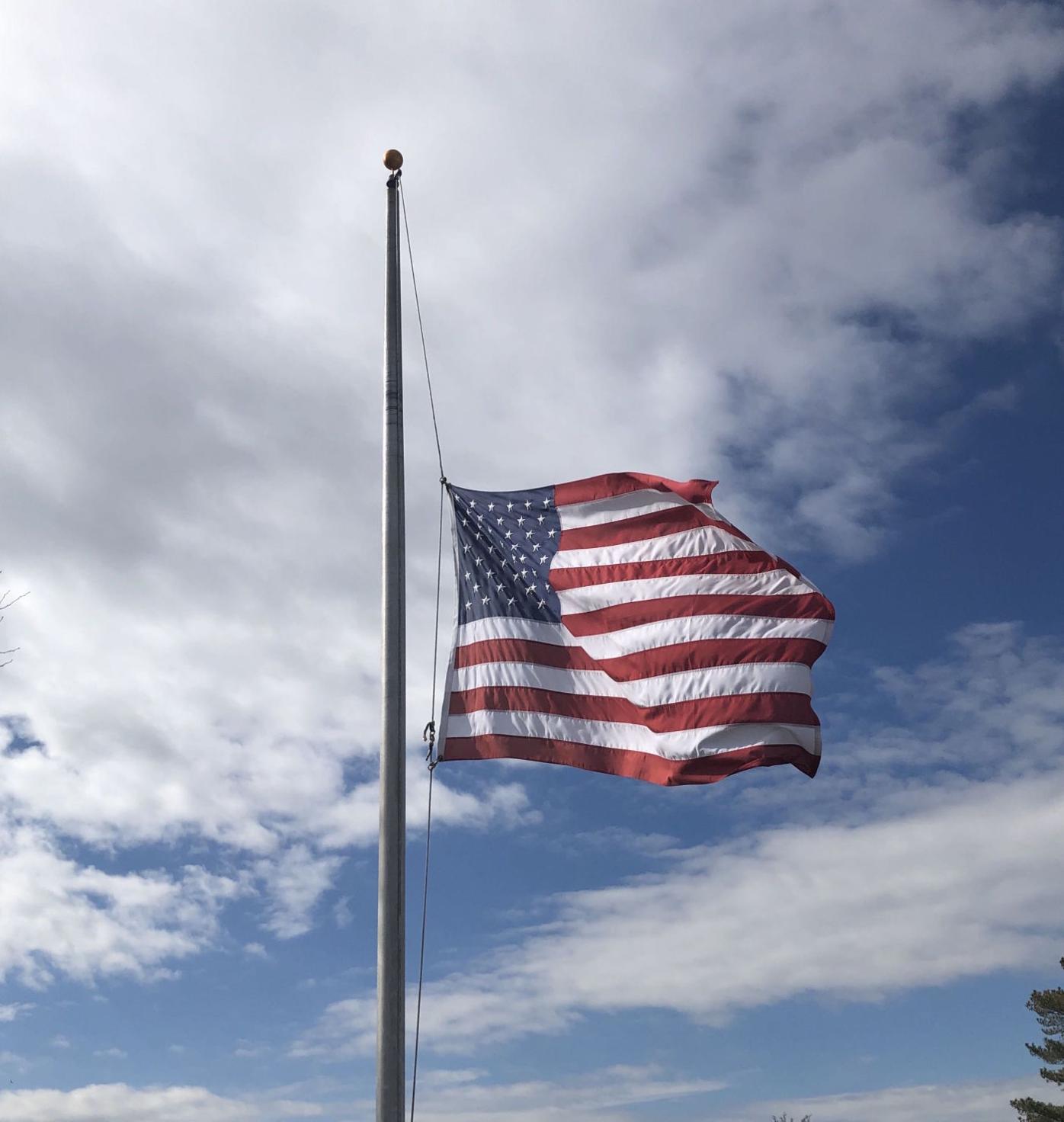 U.S. flags in Easton, like this one at The Star Democrat, flew at half-staff as a memorial to the half-million people in the U.S. who have died of COVID-19. President Joe Biden ordered flags to fly at half-staff until sunset Friday, February 26.

In this Thursday, Feb. 11, 2021, photo Jorie Winbish, 56, of Washington, reacts as she receives her second dose of the COVID-19 vaccine at a clinic at Howard University, in Washington.

U.S. flags in Easton, like this one at The Star Democrat, flew at half-staff as a memorial to the half-million people in the U.S. who have died of COVID-19. President Joe Biden ordered flags to fly at half-staff until sunset Friday, February 26.

EASTON — Talbot’s COVID-19 numbers are down even as the U.S. flag is flying at half-staff as a memorial to the half-million people in the nation who have died of the virus.

“The counterpoint to (the number of fatalities) is that in the U.S., at least, our number of new cases each day has decreased by 44% in the past two weeks,” said Talbot County Health Officer Dr. Maria Maguire.

During a noon private sector Zoom call Tuesday, Feb. 23, hosted by the Talbot County Department of Economic Development and Tourism, Maguire described how the county is making progress in vaccinating and testing residents.

“We had that really severe surge in cases after the holidays, and it has come down significantly,” Maguire said.

While the case rate in Talbot County is higher, at 23 per 100,000, than the statewide average of 13 cases per 100,000 population, it’s “a significant decrease from two weeks ago, and even the peak, which was mid-January,” Maguire said.

Two weeks ago, there were 165 people in active isolation in Talbot County. Now, 100 people are isolated — a 30% decrease from two weeks ago.

“We’re making progress,” Maguire said. “Our positivity rate has come down a lot over the past few weeks.”

She didn’t mention the 28 people in the county who have died of COVID-related illnesses since the pandemic began just over a year ago.

Statewide, the positivity rate is 4%, while Talbot County’s rate is slightly higher at 5.15% “although part of that is because our testing demand has significantly decreased,” she said.

“The other good news is that hospitalizations are down in Maryland,” Maguire said. On Tuesday, 978 people were hospitalized for COVID in the state, and it was 1,400 two weeks ago.

“People seem to be hopefully following guidance — wearing masks and social distancing when they can,” Maguire said.

Maguire likened mask-wearing and social distancing to taking a medicine for a health condition. “You know it’s working, and that means you keep taking it; you don’t stop,” she said. “So keep wearing those masks.”

Talbot’s percentage is higher because it is a “health care hub,” Maguire said.

“We had a lot of residents who were qualified for Phase 1a, we have a lot of seniors and we have, luckily, a population that is very interested in getting vaccinated,” she said.

The goal vaccination rate — to really reach what’s considered herd immunity — is about 70 to 85%,” (which would) enable us to return to some kind of normalcy,” she said.

“We’re making progress slower than I’d like,” she said. “But, you know, every day more people get vaccinated. Right now in Talbot County, about 55% of individuals aged 85 and above have been vaccinated with at least one dose, and over 50% of those 75 to 84.” The focus is now shifting more to the Phase 1b group of those 75 and older.

The health department, University of Maryland Shore Medical Center at Easton, Choptank Community Health System, Walgreen’s and Walmart all are distributing the vaccine in Talbot County, but winter weather and delivery delays during the past two weeks have slowed progress.

“So it does put kind of a burden on people to sign up in multiple places,” Maguire said.

Maguire said she believes “the state is developing a pre-registration process for its state-run mass vaccination sites. And that may allow you to sign up for any any of the ones the state runs.”

While there are mass vaccination sites at Six Flags and the Baltimore Convention Center, she said state officials are “planning to open additional sites throughout the state. The word on the street is there will be a site in Salisbury, which will be the first one on the Eastern Shore. And they’re looking for additional sites on the Eastern Shore as well. So hopefully, that can give our residents more access.”

The decrease in COVID cases has meant a decreased demand for testing.

Testing at the Elks Lodge site in Easton is available on Tuesday and Thursday mornings, down from three mornings a week. Choptank Community Health System helps the health department run a testing site at St. Michael’s Middle High School 4 to 6 p.m. on Wednesdays. Walk-ins are accepted.

The Talbot testing appointment phone number is 410-819-5632. The health department is developing a more long-term testing strategy that will also be easy to operate, Maguire said.