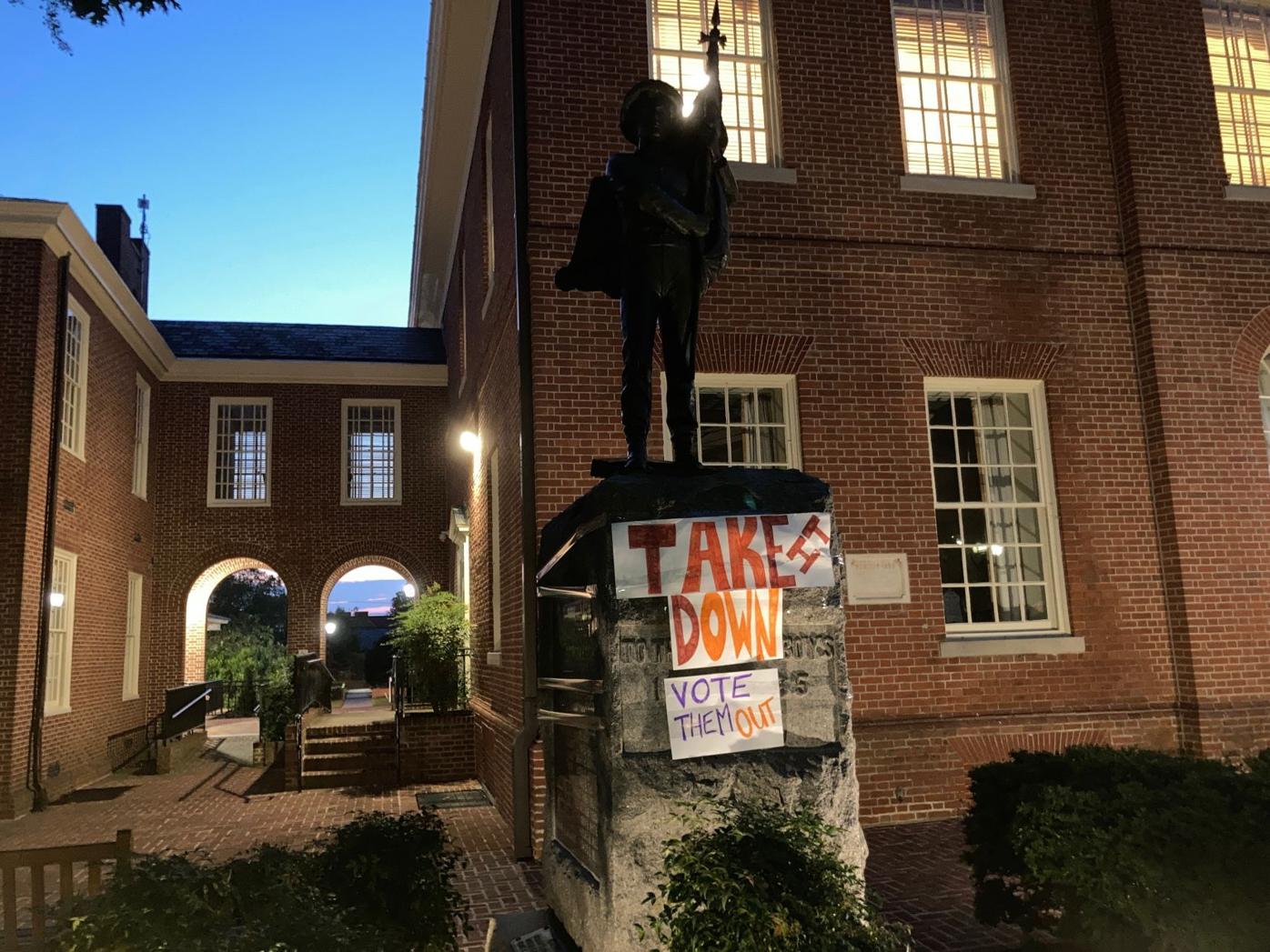 Protesters post signs on the Talbot Boys monument calling for its removal Tuesday, Aug. 11, after three of five Talbot County Council members voted against taking it down. 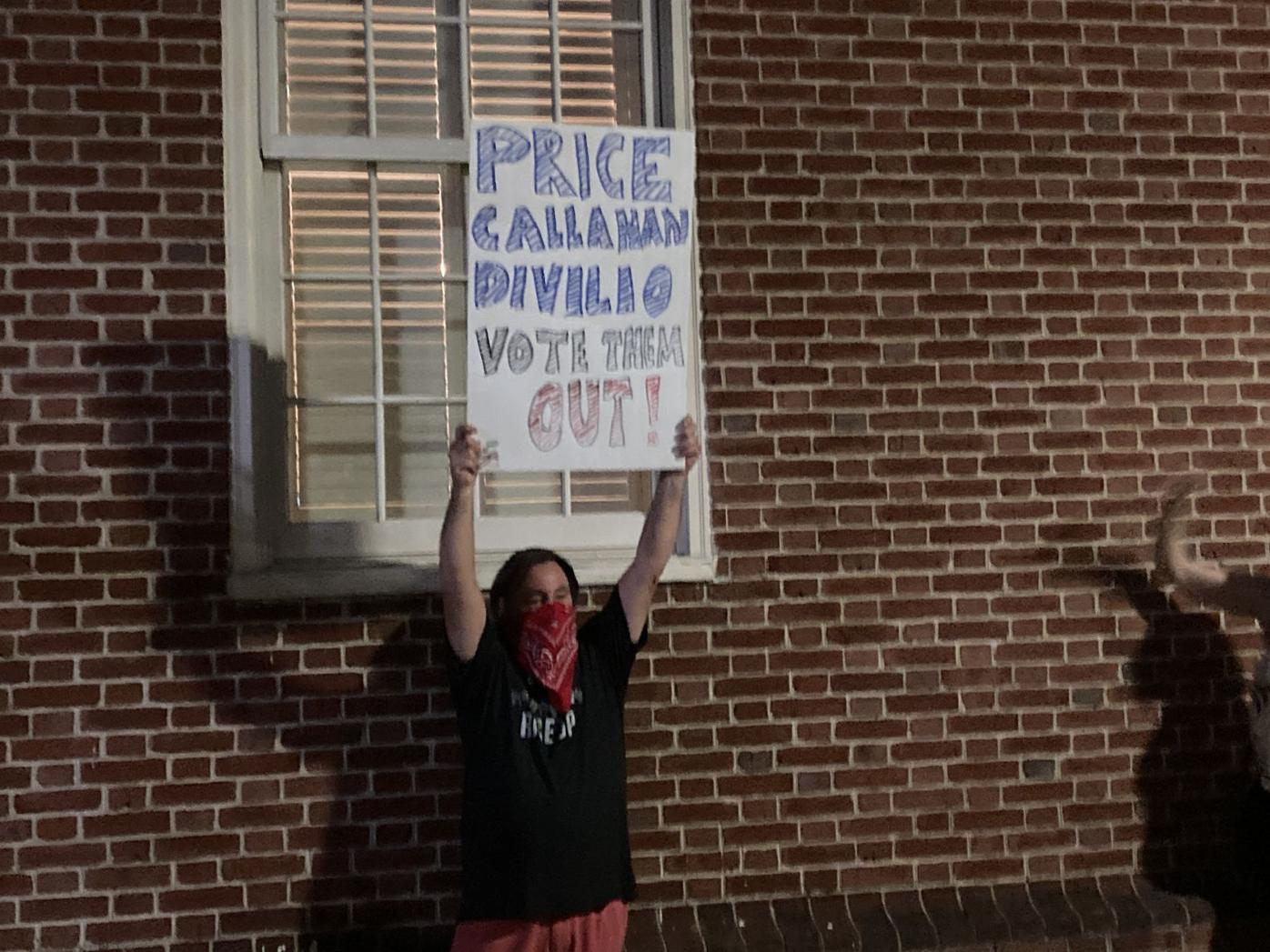 A protester calls for Talbot County Council Vice President Chuck Callahan, and Council Members Frank Divilio and Laura Price to be voted off the council after the three voted against removing a controversial monument to the Confederacy from the county courthouse grounds Tuesday, Aug. 11. 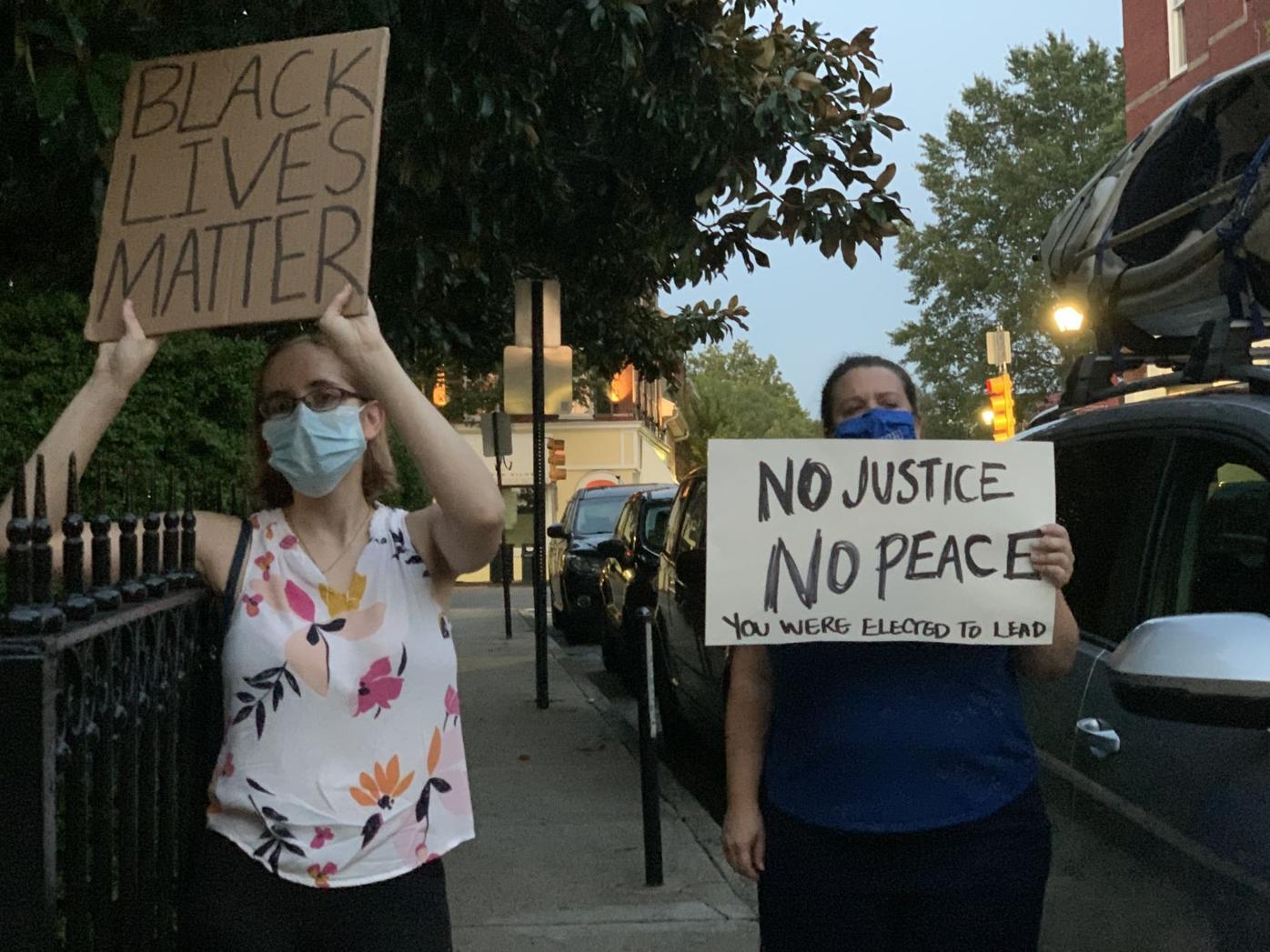 Protesters post signs on the Talbot Boys monument calling for its removal Tuesday, Aug. 11, after three of five Talbot County Council members voted against taking it down.

A protester calls for Talbot County Council Vice President Chuck Callahan, and Council Members Frank Divilio and Laura Price to be voted off the council after the three voted against removing a controversial monument to the Confederacy from the county courthouse grounds Tuesday, Aug. 11.

EASTON — At a time when statues and symbols with racist ties are increasingly fueling a simmering nationwide outrage, the Talbot County Council voted Tuesday evening, Aug. 11, to keep the controversial Talbot Boys monument to the Confederacy in its place.

Three of five council members voted against the statue’s removal from the county courthouse lawn because they said it was “inappropriate” to vote to take down the statue in the middle of a pandemic that has prevented some public participation in the council’s decision-making.

The vote to keep the monument in place immediately prompted a protest that attracted dozens outside the council’s Bradley Meeting Room at the county courthouse in Easton. The crowd could be heard by the council members inside the meeting room chanting, “Take it down,” “Black Lives Matter,” “We will vote you out” and “No justice, no peace.”

The council continued tackling its remaining agenda items through the crowd’s shouting, though Pack momentarily acknowledged the protesters, calling them an “angry mob.”

When the group began knocking on the meeting room windows, Pack asked the county employees in the room to call the officers on duty at the courthouse to address the crowd outside. Soon after Pack’s request, the protesters stopped pounding on the windows, and the council continued with its planned meeting business.

Ultimately, however, the meeting was adjourned early and the council suspended its remaining agenda items because, Pack said, “We understand that citizens are very upset with the vote that was taken earlier today.”

In response to the council members who voiced their opposition to removing the statue during a discussion ahead of Tuesday’s vote, Lesher said the timing of the council’s vote was “not yours, not mine. It was the public that asked for this.”

Lesher said the monument is “not viewed as a welcoming symbol” and the council’s decision to keep it in place “sadly speaks of who we are as a county.”

Divilio, while he voted against the statue’s removal Tuesday, said he was not against taking action on the monument. His problem with it, he said, is “the timing of right now.”

Divilio said he was “committed to this goal (of finding a solution to the statue controversy), and being fair and transparent” — but because of the restrictions imposed on council operations during the coronavirus pandemic, he said, the council’s public hearings “failed to be anywhere close to the quality” of those it has held in the past.

Pack, arguing that the council should be able to vote to take down the statue despite challenges from the pandemic, said the council members should “conduct business as best we can” during the health crisis.

“We can’t keep on saying we have to have 100 people in the room. We’re not going to get there, we’re not,” he said. “We have to do the best we can with the technology at hand.”

The council president said he was “sad” that the council did not vote to remove the Talbot Boys statue, and reiterated Tuesday that “it is not appropriate to keep that symbol on the courthouse lawn.”