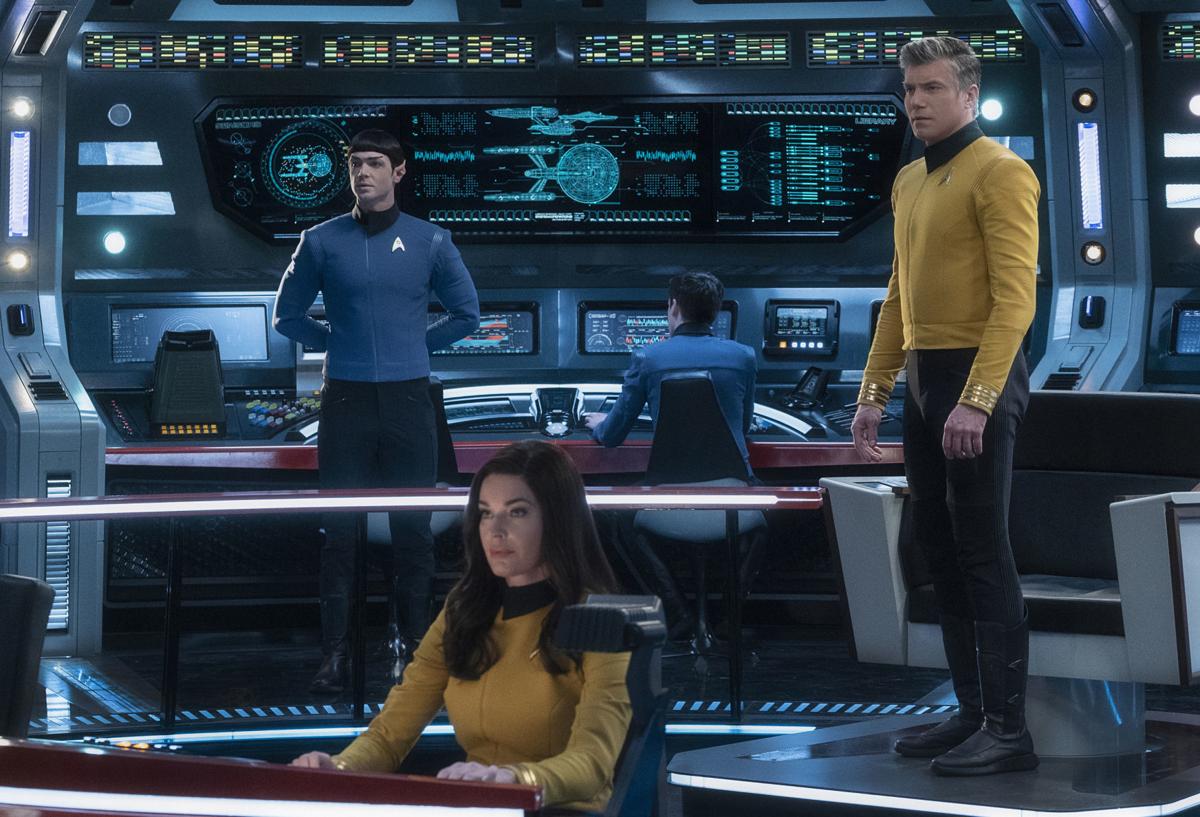 From left, Ethan Peck as Spock, Rebecca Romijn as Number One and Anson Mount as Capt. Pike will star in the CBS All Access series “Star Trek: Strange New Worlds.” 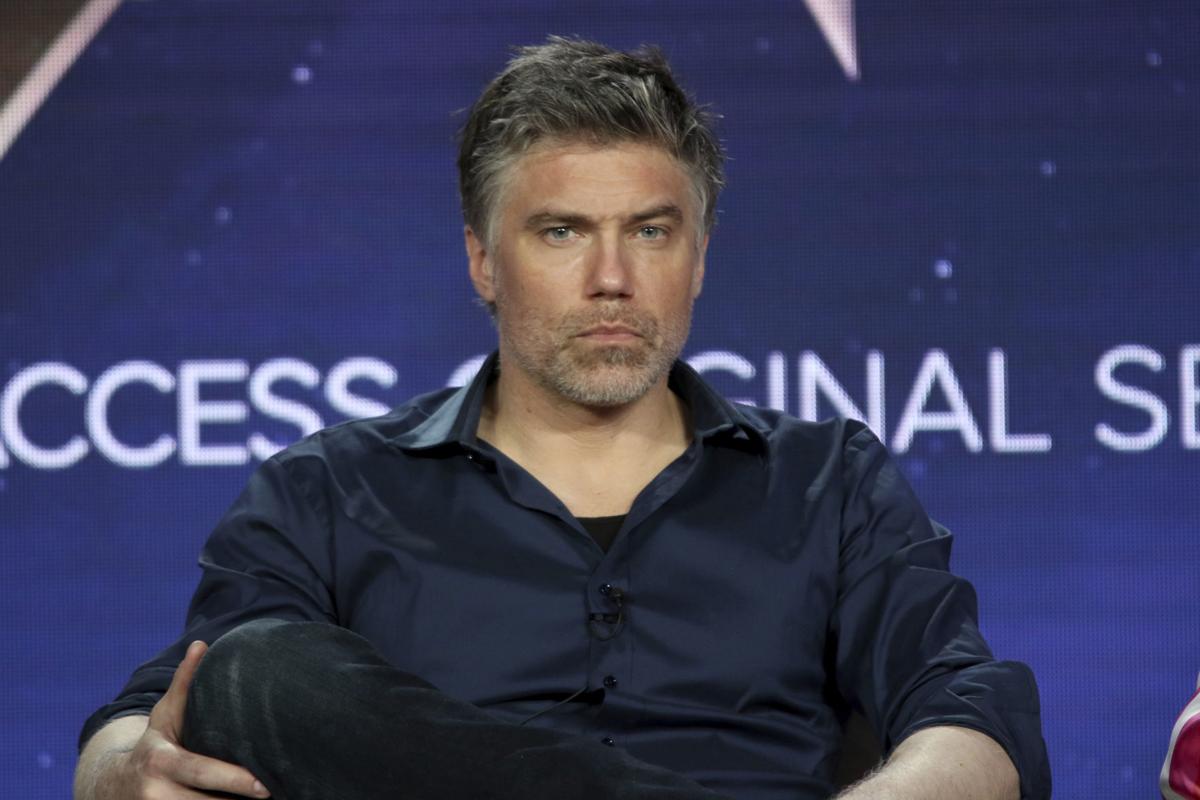 In this 2019 file photo, Anson Mount participates in the “Star Trek: Discovery”’ show panel during the CBS All Access presentation at the Television Critics Association Winter Press Tour at The Langham Huntington in Pasadena, Calif. Mount plays Capt. Christopher Pike, a once-obscure character in the “Star Trek” universe who is getting a deeper examination in the upcoming series “Star Trek: Strange New Worlds.”

From left, Ethan Peck as Spock, Rebecca Romijn as Number One and Anson Mount as Capt. Pike will star in the CBS All Access series “Star Trek: Strange New Worlds.”

In this 2019 file photo, Anson Mount participates in the “Star Trek: Discovery”’ show panel during the CBS All Access presentation at the Television Critics Association Winter Press Tour at The Langham Huntington in Pasadena, Calif. Mount plays Capt. Christopher Pike, a once-obscure character in the “Star Trek” universe who is getting a deeper examination in the upcoming series “Star Trek: Strange New Worlds.”

In the beginning, in the “Star Trek” universe, there was only Capt. Kirk. At least to the general public.

When the starship Enterprise first whooshed across American television screens on Sept. 8, 1966, William Shatner’s James T. Kirk was the smart leader sitting in the captain’s chair. He was stouthearted, eloquent, curious, fair. Kennedylike, even. He was a principled explorer committed to spreading New Frontier values to the 23rd-century stars.

And yet: Kirk also could be something of an interstellar Don Draper — brooding, arrogant, a top-down manager who earned his privilege but also often presumed it. Despite being progressive for his era, he could be condescending to anyone but his top righthand men — and sometimes creepily appreciative of the women he encountered.

But Kirk actually had been preceded as captain of the Enterprise by Christopher Pike — a stoic, vague figure played by Jeffrey Hunter in a rejected 1964 “Trek” pilot who made only a fleeting appearance in the original series, mainly so the pilot footage could be recycled. The character reappeared in two recent movie reboots, portrayed ably by Bruce Greenwood, but was never a foundational fixture of “Star Trek” lore.

“Trek” aficionados were thrilled last month to learn that Pike (now played by Anson Mount), his first officer “Number One” (Rebecca Romijn) and the still-evolving, pre-Kirk version of Spock (Ethan Peck) would be following up their season-long stints on “Star Trek: Discovery” with a brand-new show. Called “Star Trek: Strange New Worlds,” it is set in the decade before Kirk takes command.

And as played today by Mount, Capt. Pike — now framed through a creative lens that has captured 54 years of captaining by Kirks, Picards, Siskos, Janeways and Archers — may be the finest, most intuitive leader the “Star Trek” universe has ever produced.

“Both within the show’s world and our own, Capt. Pike is a breath of fresh air,” Jessie Earl, whose Trek-focused “Jessie Gender” YouTube videos explore social and political issues, said in an episode about Pike last year.

“Pike’s lack of ego makes him a perfect model of leadership worth aspiring to,” Earl said. “Pike represents what ‘Star Trek’ has always been about: showing us what we could be if we strove to actively pursue and cultivate the best parts of ourselves.”

It’s not accidental that Pike is the son of a father who taught science and comparative religion — an embodiment of the empiricism-faith equation that “Star Trek” and its captains always have espoused. In many ways, in fact — even more so than Chris Pine in the movie reboots — Pike functions as James T. Kirk 2.0.

Both are utterly principled and committed to their missions. But where Kirk could be arrogant, Pike is steadfast. Where Kirk was expansive and welcomed attention, Pike is wary of it — but seamlessly claims center stage when needed. Most of all, where Kirk was deeply committed to his responsibility to ship and crew — crippled by it, even — Mount’s Pike adds the view of himself as a humble servant-leader who derives his sense of command not only from the success of his mission but directly from the successes of his crew.

This is very much in line with how the captains who came after Kirk evolved the notion of command in “Star Trek” through changing times.

Jean-Luc Picard — in the 1987-94 “Next Generation” series and movies, and in this year’s “Star Trek: Picard” — reframed the captaincy as both more cerebral and less dogmatic. Benjamin Sisko from “Deep Space Nine” was effectively sharing authority with an alien race in whose backyard his space station sat.

The strong and intuitive Kathryn Janeway from “Voyager” was the first woman to lead both a starship and the series it populated. And Jonathan Archer, the captain of an earlier version of the Enterprise, was both authoritative and — as the most far-flung Starfleet explorer of his era — deeply self-doubting at times.

Even on “Discovery,” putting aside the troubled Capt. Gabriel Lorca of the show’s first season, the real leader of the show is Michael Burnham (Sonequa Martin-Green) — an amalgam of conflicts and setbacks and self-recriminations who emerges as the ship’s biggest influencer because of her difficult road, not in spite of it.

And let’s not forget Kirk himself — the aging iteration from the 1980s movies that Shatner shepherded into someone who was more introspective, sometimes regretful and more willing to listen.

All of these are ingredients that, in 55 years, led the character of Pike from its 1964 iteration (“I can’t get used to having a woman on the bridge”) to the current version (“Starfleet … is a promise. I give my life for you. You give your life for me. And nobody gets left behind.”).

Of the many “Star Trek” sequels and movies that have emerged over the decades, this will be the first live-action one to take place aboard the starship that started it all — that original Enterprise.

And while television storytelling has come many light years since the original series’ era, to hear the producers and actors tell it, “Strange New Worlds’ will strive for the sensibility of the original — a spirit of exploration and optimism, and even nonserialized, single-episode arcs.

“We’re going to get to work on a classic ‘Star Trek’ show that deals with optimism and the future,” Mount said from quarantine last month in a YouTube video revealing the show.

They’ll also be exploring the rich history of the original Enterprise itself, a ship so storied that a mail-in campaign by fans in the mid-1970s led NASA to rename the first space shuttle after it. Lovingly reconceived to appear in the second season of “Discovery,” it is sleek and moody and rich with the colors and layout that made it so compelling in the 1960s — updated for today’s HD audiences but holding onto the soul of its low-budget predecessor.

And smack in the middle, in a chair familiar to generations of fans, will sit Christopher Pike, charged with embodying everything in a half-century of “Trek” that made captains effective and memorable.

James T. Kirk was a master class in leadership for the 1960s, just as Jean-Luc Picard was a thoughtful, more introspective model for the carpeted, richly paneled bridge of the late-1980s Enterprise-D.

But yanking a thinly developed character from the beginning of “Star Trek” lore and offering him up as a model of leadership for the 2020s — well, that’s not an easy task. “Star Trek: Strange New Worlds,” expected in 2021, will be doing that every week.

In first developing the character that would evolve into Capt. Pike, “Trek” creator Gene Roddenberry described him this way: “He is a complex personality with a sensitivity and warmth which the responsibilities of command often forces him to hide.”

That was 1964. Today, for this latest captain of the Enterprise, sensitivity and warmth are no longer hidden. They’re right there front and center, along with all the complexity. And “Star Trek”— which even in its darkest hours is about building a brighter future — is better off for it.