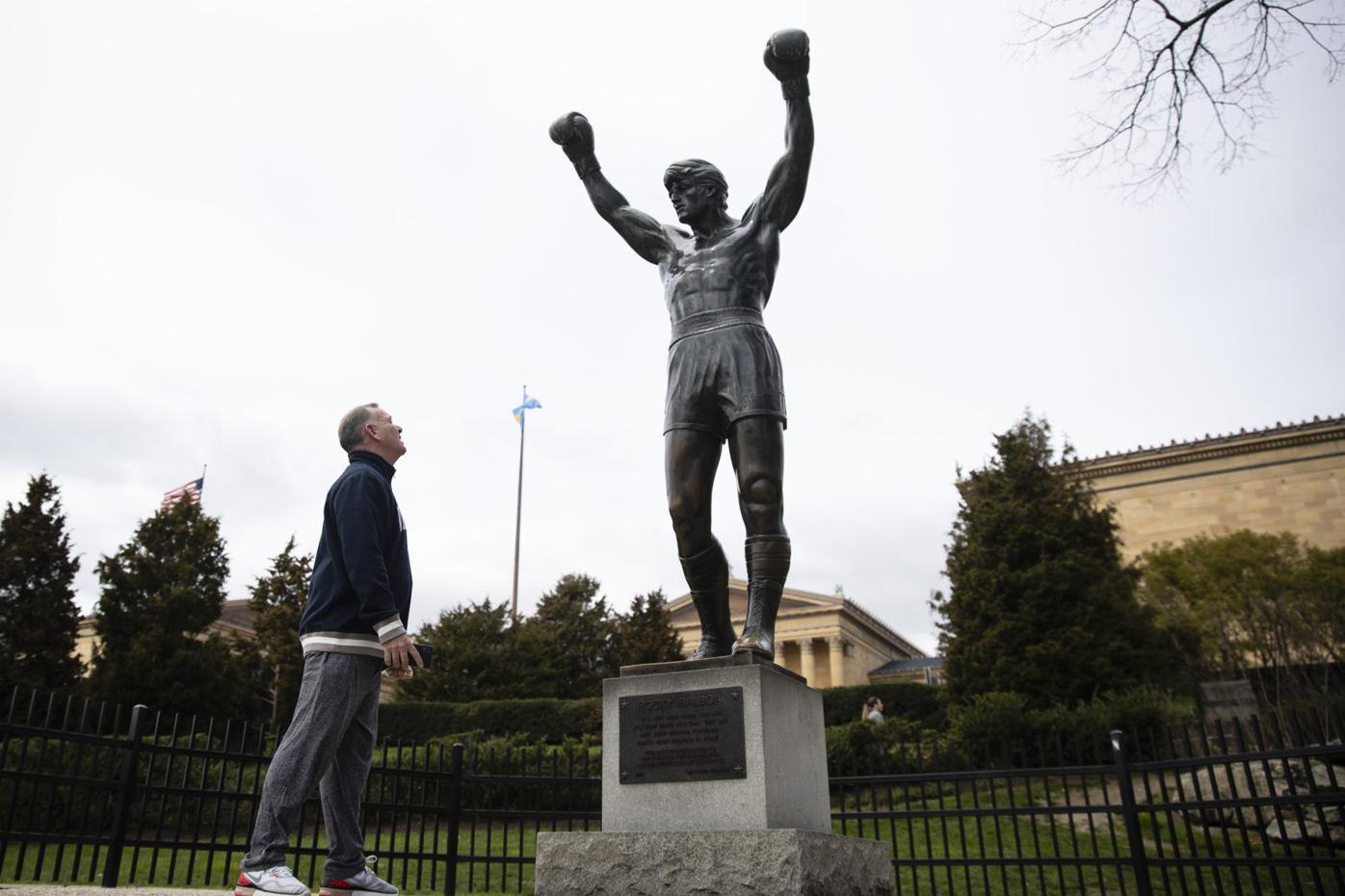 In this April 3 photo, Timothy Frank visits the Rocky Statue at the Philadelphia Art Museum in Philadelphia. “Rocky” tied for No. 2 in The Associated Press Top 25 favorite sports movies poll. 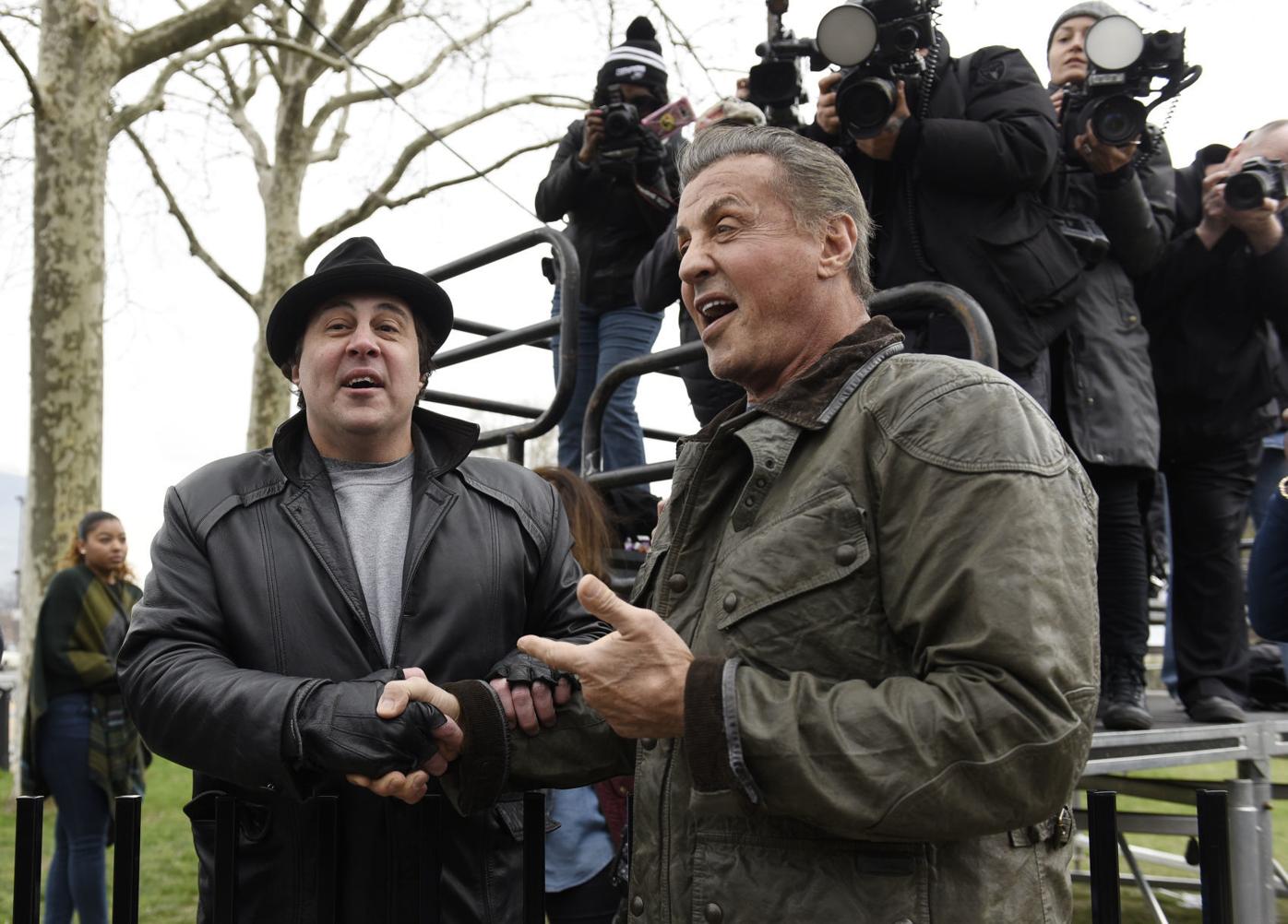 In this 2018 photo, Sylvester Stallone, right, greets Rocky impersonator Mike Kunda at a photo op for “Creed II” in Philadelphia. Kunda turned his resemblance of Stallone into a career as owner of the Yo, Philly! Rocky Film Tour.

In this April 3 photo, Timothy Frank visits the Rocky Statue at the Philadelphia Art Museum in Philadelphia. “Rocky” tied for No. 2 in The Associated Press Top 25 favorite sports movies poll.

In this 2018 photo, Sylvester Stallone, right, greets Rocky impersonator Mike Kunda at a photo op for “Creed II” in Philadelphia. Kunda turned his resemblance of Stallone into a career as owner of the Yo, Philly! Rocky Film Tour.

PHILADELPHIA (AP) — The Brazilian exchange student made one request of his host before his study abroad semester was cut short and he returned home to Sao Paulo:

Take me to Rocky.

On the way to the Philadelphia airport, Joao Martucci, who studied linguistics at West Chester University, took a pit stop and beelined to the Rocky Balboa statue at the base of the Philadelphia Museum of Art. He raised his arms in triumph like Philly’s favorite fictional fighter and then recreated the boxer’s famous run up 72 stone steps to the entrance of the museum. He celebrated his ascent by waving his arms and hopping around (minus the strains of “Gonna Fly Now”) just as Sylvester Stallone’s character had done at the end of his training run in “Rocky.”

“I just really like the films about Rocky,” he said. “I really wanted to know the statue and the stairs.”

He’s not alone in his Rocky fandom. From South Philly to Brazil and round the globe, an incalculable number of Rocky Balboa fans recreated the run made famous in “Rocky” and duplicated in sequels, spinoffs and Super Bowl spots.

The 1976 film won a best picture Oscar and transcended the sports genre to become a pop culture sensation and is etched in Philadelphia history every bit as much as the Liberty Bell and Ben Franklin.

You know the quotes by heart:

“Ain’t gonna be no rematch.”

Just like Balboa in his first fight with Apollo Creed, “Rocky” failed to win the big one among the contenders for top sports movie. “Rocky” finished tied with “Bull Durham” for No. 2 in The Associated Press Top 25 favorite sports movies poll. There were several Rocky rounds that could have cracked the poll — “Rocky” bred four sequels, “Rocky Balboa,” and two Michael B. Jordan-led “Creed” films.

The movie did more for Philly than create easy landmarks for fans to visit or grumble their best “Yo, Adrian!” impressions; it inspired everything from a short-lived Broadway play to Philadelphia’s Rocky Run, a 50k (31 miles) jaunt based on the inspirational montage in the 1979 flick as Balboa trains for his heavyweight championship rematch with Creed.

But it’s the first movie that packs a punch with the city, back when Balboa was just a down-on-his luck boxer that served as a metaphor on what it means to fight for love and prove you have the eye of the tiger.

Tanyell Blake, a “Rocky” fanatic, had to go the (social) distance and escape feeling cooped up in her Pemberton, N.J., home to make her first trip to the statue. Stallone commissioned the statue for a scene in 1982’s “Rocky III” and donated it to the city afterward. Lines usually snake around the museum sidewalk full of fans who want a snapshot and a selfie with the 9-foot-11, 1,300-pound bronze beast. During the coronvirus pandemic, it’s easy to step up and go eye-to-bronze knee with the statue, no wait necessary.

Blake loved all the “Rocky” movies but called the first one her “all-time favorite.” She had knee surgery and felt inspired by the films to run the steps.

At the 2006 “Rocky Balboa” premiere in Philadelphia, Stallone said he owed so much of the movie’s success to the city.

“It belongs to Philadelphia,” he said. “It’s a very unique relationship. It’s something no one could have ever planned on.”

Mike Kunda turned his resemblance of a Stallone into a career as owner of the Yo, Philly! Rocky Film Tour. Wearing a pork pie hat and black leather coat, the 52-year-old Kunda has given nearly 1,100 tours of “Rocky” movie locations since he began in 2011, telling the inside story of “Rocky” as he drives fans around the city from the street where Rocky flirts with Adrian after their first date to the telephone pole where a loan shark yells at Balboa for failing to collect a debt.

“I think it just taps into wanting to be our personal best,” Kunda said. “I just try and keep the goodness of Rocky alive.”

“Rocky appeals to that person who has been overlooked,” he said. “People judge you. So many of us have been overlooked that I think it’s important to be able to fail on our own terms. Give me a shot to fail. Rocky has great determination and that’s something that can be lacking in people.”

The last image of the Balboa character came at the end of “Creed II” when he visits his son to try and patch a strained relationship. Not even Stallone is ready to say the character is set to hang up his gloves and fade into black on the silver screen.

“I never say no to Rocky,” Stallone said. “I have a couple of ideas. But I’m not so sure because they don’t really involve the ring as much as they should. I’m not so confident that it’ll be exciting enough for the audience. But who knows?”