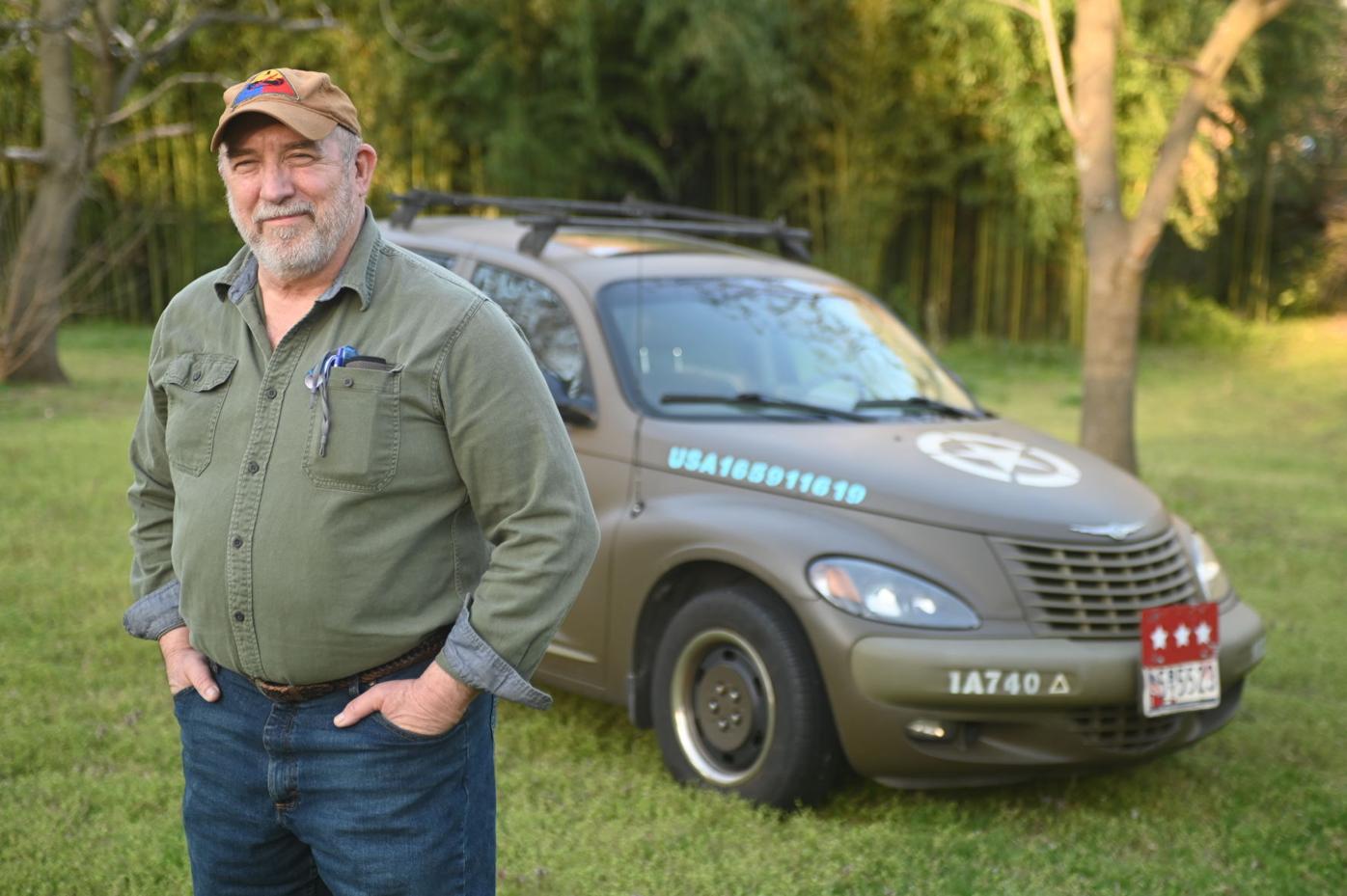 John Liszewski converted his PT Cruiser into a staff car. He said it was a lot easier than driving a World War II ambulance around. 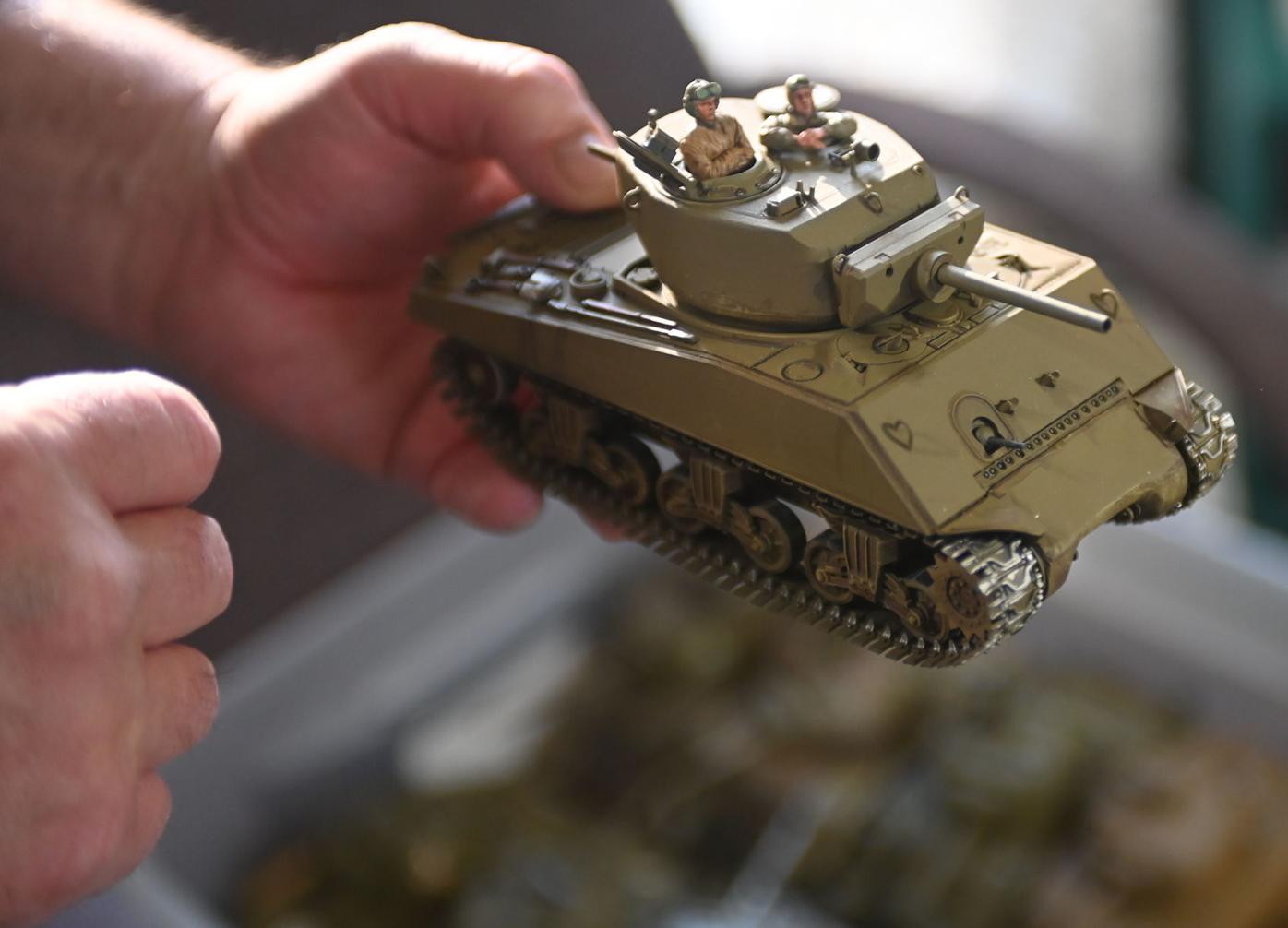 This is a World War II tank. Notice the detail of the two soldiers’ arm gestures. John Liszewski has portable containers full of different kinds of WWII apparatus from all sides of the conflict. 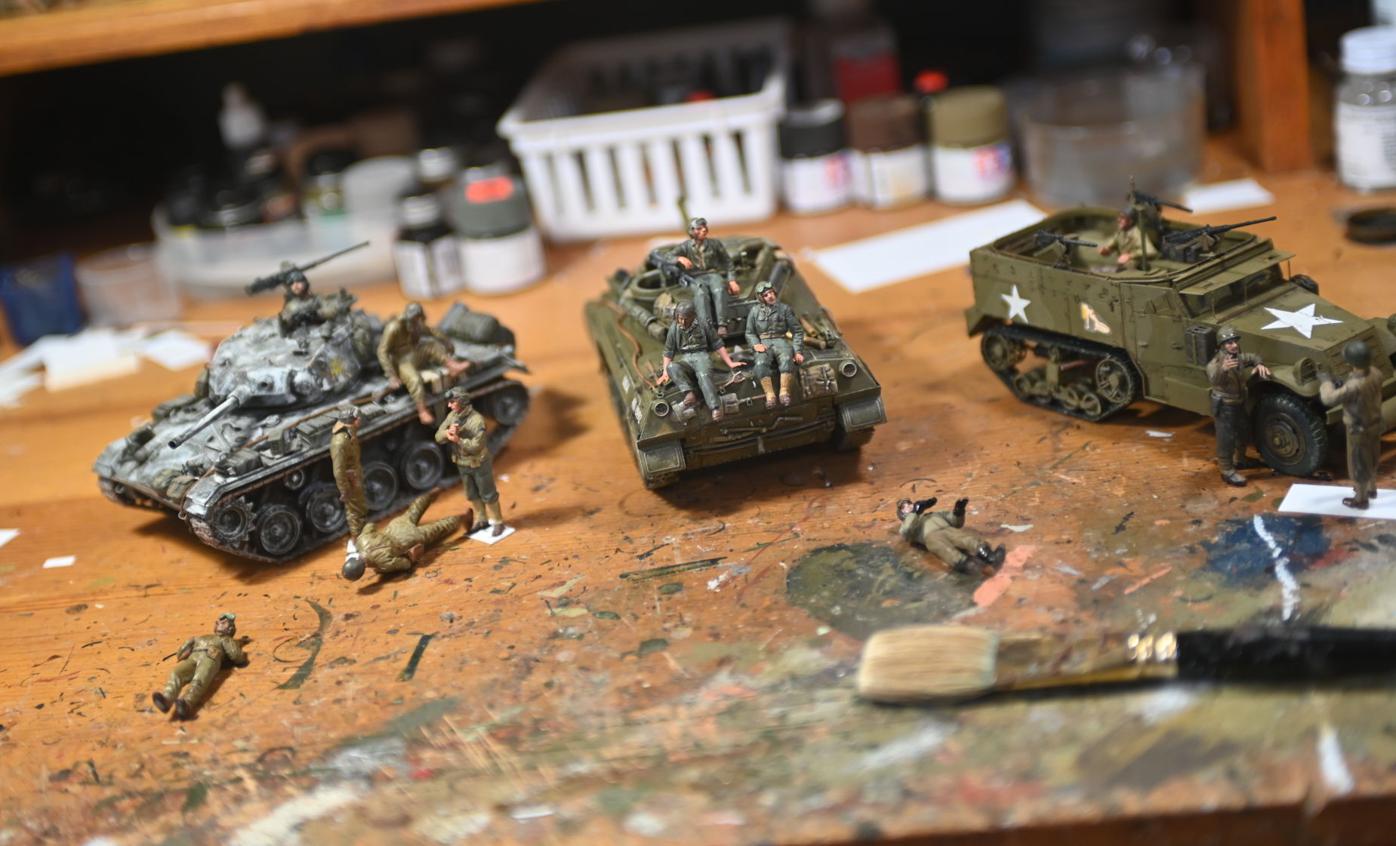 John Liszewski’s work station looks like a battlefield. There are magnifying glasses on arms, all different shades of green, and little army men waiting for their maker. 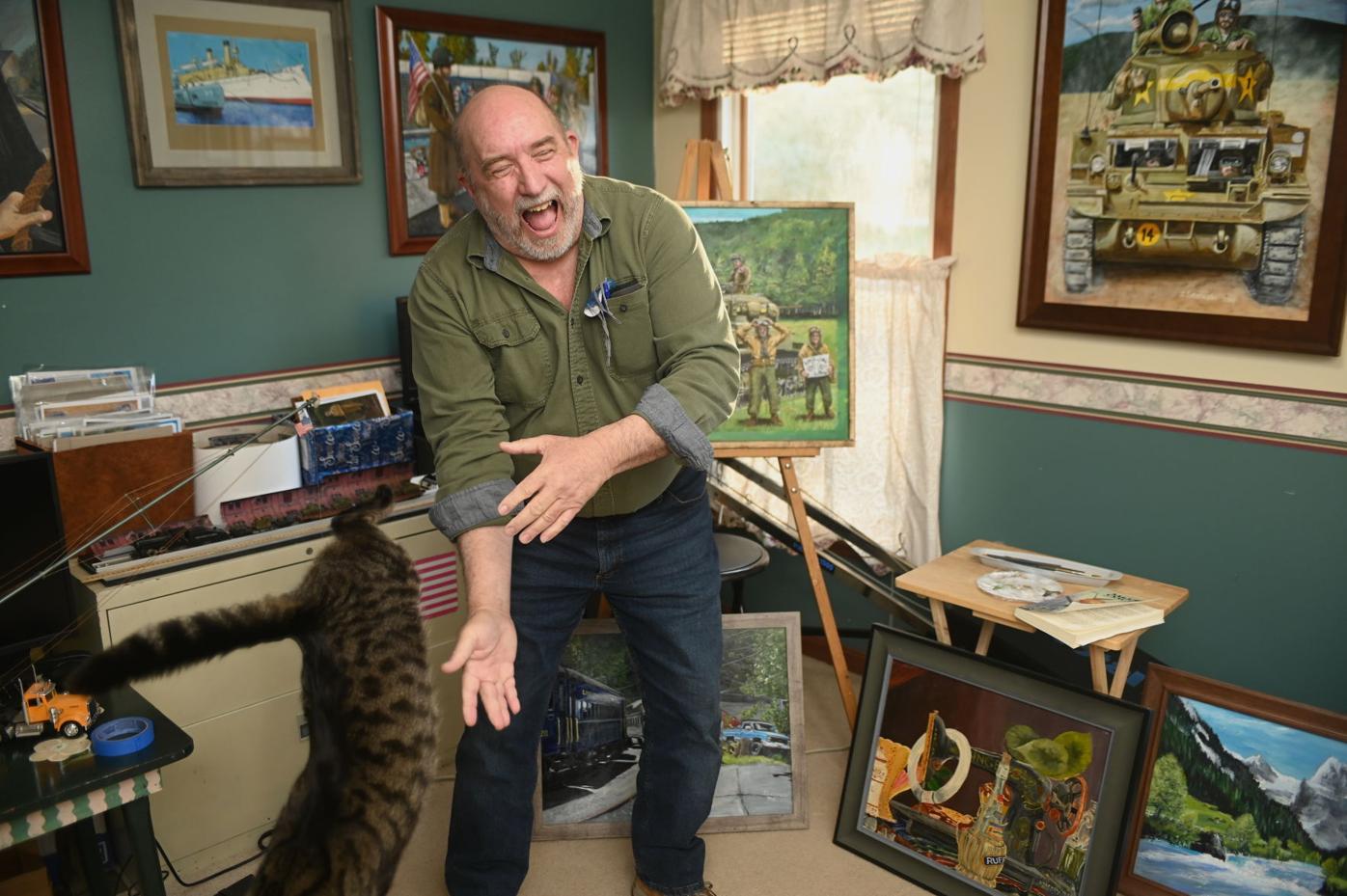 John Liszweski in his studio in Harmony that is stuffed with original paintings, comic books and World War II models — even a cat or two. 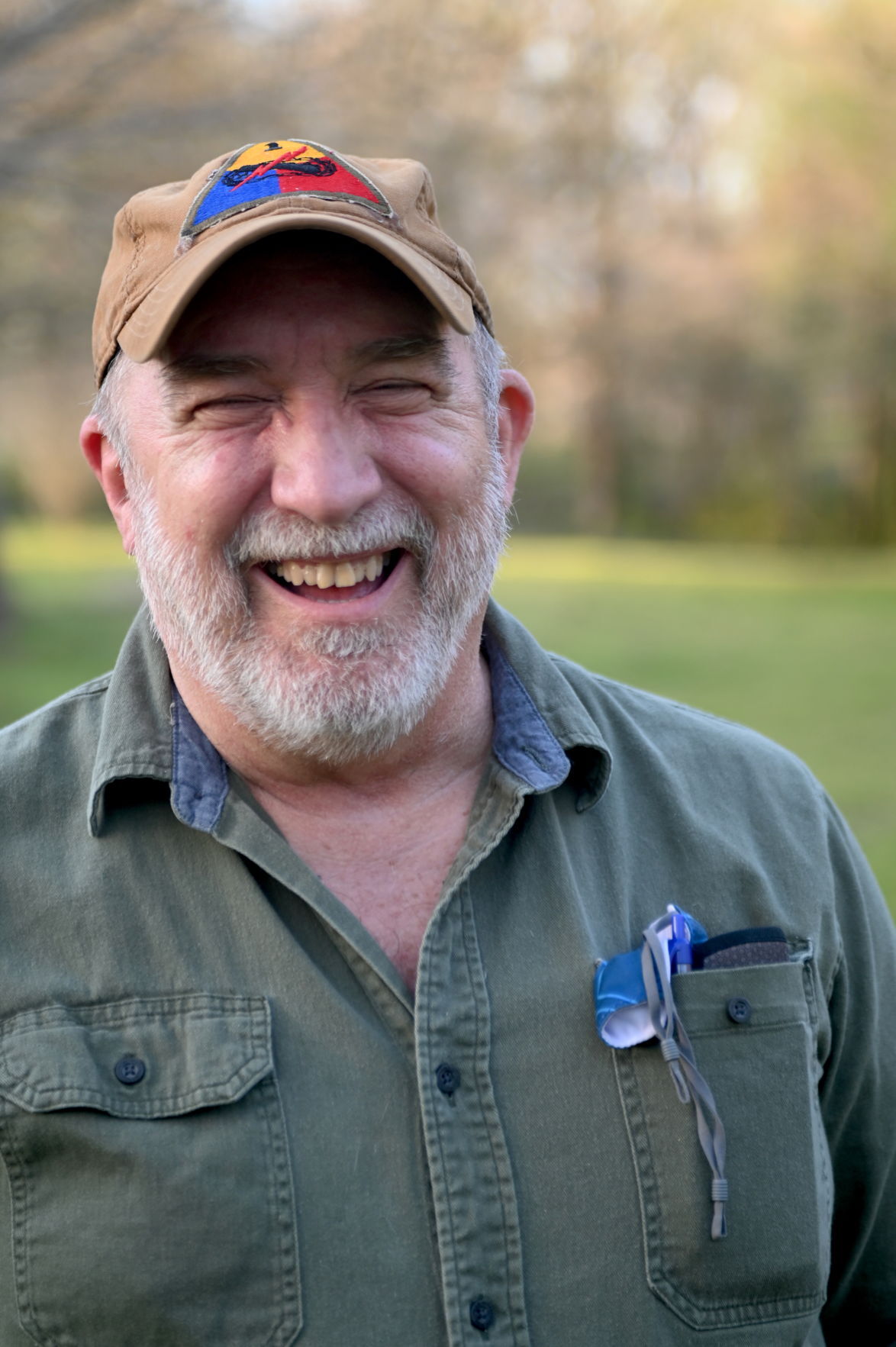 John Liszewski laughs a lot. Non of this starving artist, black turtleneck and post modern theory for him. He said he does it for fun.

John Liszewski converted his PT Cruiser into a staff car. He said it was a lot easier than driving a World War II ambulance around.

This is a World War II tank. Notice the detail of the two soldiers’ arm gestures. John Liszewski has portable containers full of different kinds of WWII apparatus from all sides of the conflict.

John Liszewski’s work station looks like a battlefield. There are magnifying glasses on arms, all different shades of green, and little army men waiting for their maker.

John Liszweski in his studio in Harmony that is stuffed with original paintings, comic books and World War II models — even a cat or two.

John Liszewski laughs a lot. Non of this starving artist, black turtleneck and post modern theory for him. He said he does it for fun.

DENTON — Obsessions have a way of growing and mastery is a life long pursuit. John Liszewski is besotted with World War II military vehicles. He paints them, he makes models of them, and he painstakingly saves them in a closet. It’s all in the details.

Liszewski has been chosen as the Caroline County Artist of the Month, and he is teaching model making as an art form at The Foundry in Denton.

A kidney stone the size of a pencil eraser saved him from having to enlist in the Vietnam War. He is so enamored of all things martial that he even painted his PT Cruiser matte olive green and put authentic World War Two insignia on it. It is unlike any other car on the road.

As artist of the month, Liszewski teaches with models. “I was there Saturday, brought the kits in that I had built for that so I could set up a little display,” he said.

He has an incredible studio in his home. There are posters, original art, models, army men, big magnifying lenses on flexible arms, art books. And he has four cats that cruise around. But everything has its place.

He said that he loves the work of Norman Rockwell.

“Right now I have it cleaned up, because when I get going, I have got stuff scattered everywhere,” he said of his studio.

Of course he is up on his World War II movies like “Saving Private Ryan” and “Band of Brothers.”

“‘Saving Private Ryan’ was too Hollywood. It started off OK, but as it went along it turned into a video game of battle sequences. The old timers said they got up and walked away, and I can understand that. Once that Panzerfaust, a little hand held anti tank weapon, no Sherman survives that. It still had fuel tanks on it. Sherman tanks are known as Ronsons because they light up on the first strike,” he said.

“When I was a kid growing up, I always liked to draw stuff. Particularly buses and ambulances. All the movies on the TV were World War II movies like ‘Combat,’ ‘12 O’clock High,’ ‘Great Escape’ and ‘Kelly’s Heroes.’ Most of the living history people can quote that one word for word like the ‘Rocky Horror Picture Show,’” Liszewski said.

One day, later in his life, he was driving down the highway and saw a bunch of Army vehicles along the side of the road. He pulled over.

Liszewski restored the ambulance over the course of a year. When it was road ready, he took it to the first national military vehicle club rally at Lakehurst, New Jersey.

“It was held in the field where the Hindenburg crashed. There were hundreds and hundreds of restorations,” he said.

“I had a little track vehicle called a weasel, which is the size of a jeep with wide tracks. Essentially it was a military snowmobile built by Studebaker,” he said.

Liszewski is obsessed with 20th century history and the thousand tiny details that make it come back to life. Underlying this curiosity is man practicing mastery. Whether it is martial arts, model building or painting, Liszewski sticks with things until they are done right.

So what is art? Is it something for a museum wall? Something a dealer or auctioneer can trade? Where is the line between folk art and fine art? Norman Rockwell was considered an illustrator — until the world caught up to his vision and his highest painting ever sold for $64 million and is collected by George Lucas. Now they call him an artist. It makes sense that Liszewski would like Norman Rockwell, whose work was on the cover of hundreds of Saturday Evening Posts.

“Well, Norman Rockwell is my favorite. He could pick the most natural poses out of people. I am sure he used photographs because you can’t get that kind of posturing in your head. Comic book people can. They can do anything realistic even exaggerated as it is, but finding people in comfortable poses in real life situations is probably the most interesting thing that he does. I like enough realism where you know what it is and try to find a story in what you see in your painting,” Liszewski said.

Could great art just come out of intense focus on a medium? Liszewski is a detail guy. Down to the different ways to paint a one-inch army figure. Is his tiny belt period accurate?

“Art encompasses everything. I majored in art in school for two years at a community college. And then I went to work and did all this stuff on the side. I did a whole series of cartoons for Army Motors Magazine, which was part of the military vehicle club. It wasn’t just the military, it was the vehicles. I just thought they were the coolest things,” he said.

Then he got into building model kits. At first all Liszewski could find were German models which were “big and ugly and cool.”

He got transferred to Black and Decker in Connecticut for nine years. While there he opened a hobby store. That was great until the Gulf War ended, and the economy tanked, he said. He closed up shop and moved his family back to Maryland.

Liszewski is also a martial arts teacher. He has been teaching karate on the Shore since the ’70s. He teaches a Japanese self-defense martial art form called Shotokan, which is a type of karate.

“It was never designed to be a fighting system. It is very effective. There is a video game called Tekken Seven and there is a Polish girl who is the main character and she is doing pure Shotokan. Finally, we have a heroine to keep it going. I started in 1969, so this is my 50th year,” he said.

The gaze is what he is after.

“So, the idea of a painting that works is if you look at it, and there is a trigger that sends your eye around. If you make people stand there for more than a few minutes then you are successful,” Liszewski said.

He has had art shows through the Caroline County Council for the Arts. And he has showed at Chesapeake College more than once at the artisans fair.

“My style is borderline cartoonish. I have a real hard time about being real serious about stuff. I always try to put in a little fun,” he said.

His real job, which he plans to retire from in June, is selling industrial level HVAC parts, like for skating rinks and big cold storage facilities.

“I sell parts for compressors. We build some pretty crazy neat things with about 350 pounds of pressure. Most of the skating rinks are in New England because that is skating country,” he said.

There are some connections between the model building, his work building compressors and his painting and even his martial arts practice. Detail, order, taxonomy and strength. And the stories of history.

“I said, ‘How about we do something different like model building.’ The difficulty level is on the side of the box. Like, for example, there is level one through five,” he said.

That allows lots of different levels of skills to participate.

As an example of arcane levels of detail in model building, Liszewski said, “They have kits for almost everything. There are kits for soldiers. And they have taken leaps and bounds in detail. Say you want Marines for Guadalcanal. All the grenades, all these little pieces have to be glued on. That helmet was four pieces. And that gun is several pieces.”

He opened up a closet chock full of very orderly labeled storage container organizers. Each one has soft foam in the bottom so all the models stay safe and snug.

“This is 40 years of collecting,” he said as he brought a container down as gently as if it contained Faberge eggs.

Liszewski can show his models at the Federalsburg Hobby Fair in April. He has done full scale commissions for people’s garage doors. He has designed from scratch a pumpkin cannon for his boss. It was a prototype, and then he went on to build the real thing. A hundred feet of aluminum tubing and a pumpkin has to shoot out under 500 pounds of pressure.

The hardest part of making a model?

“If you have a terrible model, getting it to fit together and then getting a finish on it where you can’t tell the struggle you went through to get it there. The end result is I have had to chop and add pieces and glue things back together to realign it. It took me a really long time. There is a whole learning process of detailing to get things to look realistic, like say the pin wash and the dry brushing,” Liszewski said. A pin wash is a tiny very specific paint treatment on a model. Dry brushing adds texture to wet paint by brushing with a dry brush.

And as for being named artist of the month? “I do OK. I don’t think I am at the level of a lot of people. That is my style. I do what I like, not what other other people want me to like. I am gracious. I was kind of surprised,” he said.