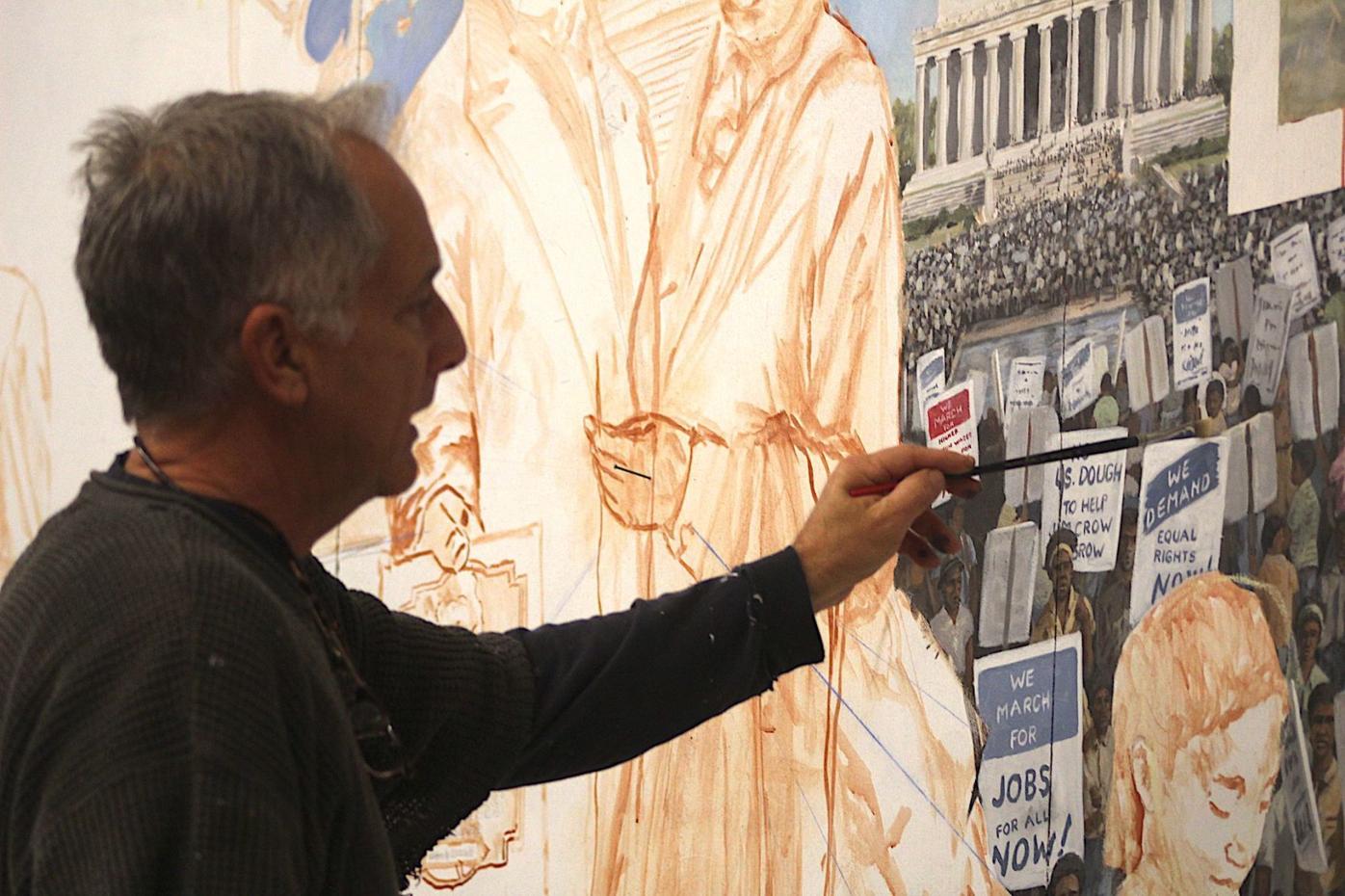 Michael Rosato works on the mural in his studio in Cambridge March 4. (The full mural is not being shown in order to keep it as a surprise for viewers). 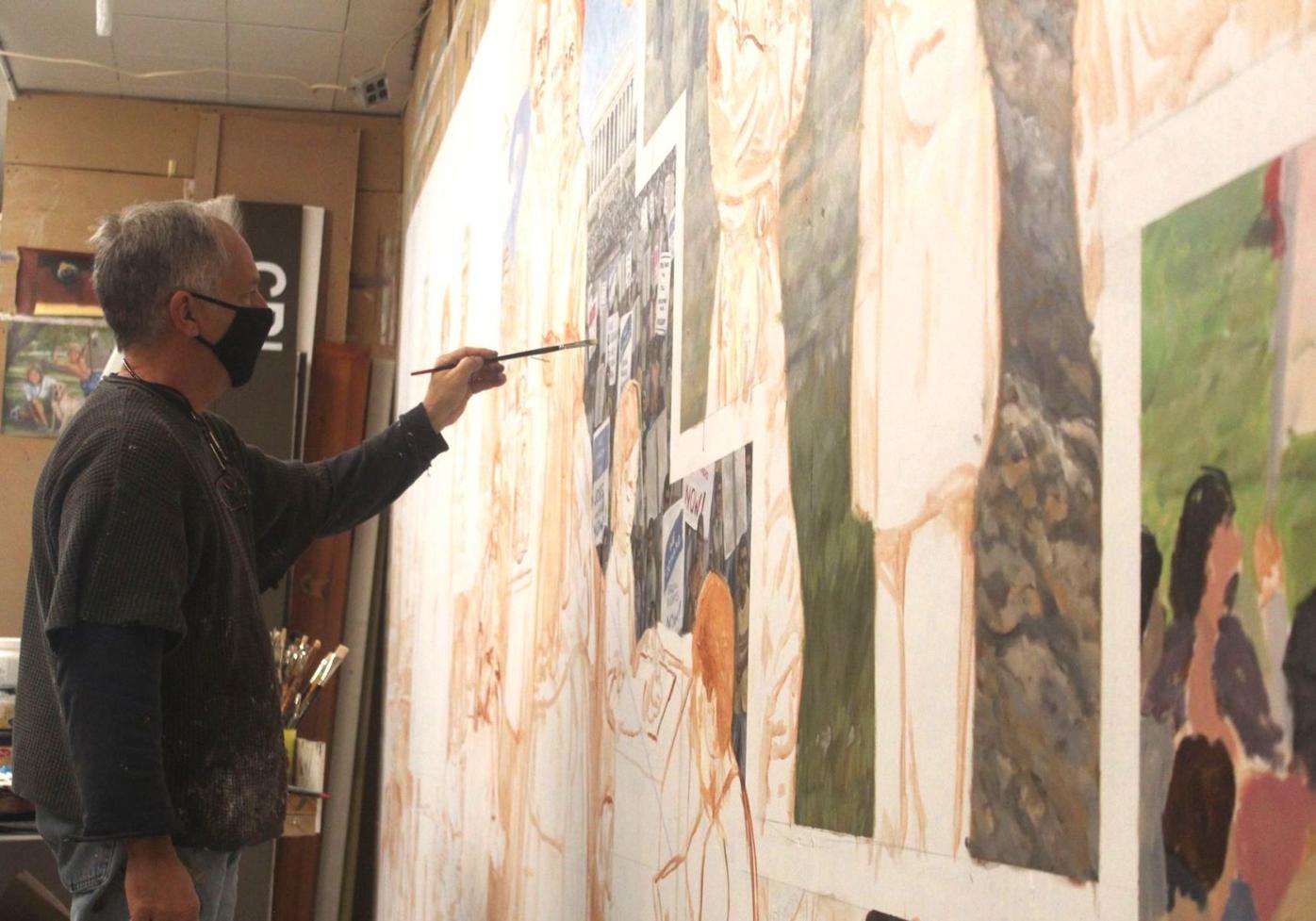 Michael Rosato in his Cambridge studio March 4. The famous artist is working on a mural to commemorate Frederick Douglass in Easton. (The full mural is not being shown in order to keep it as a surprise for viewers). 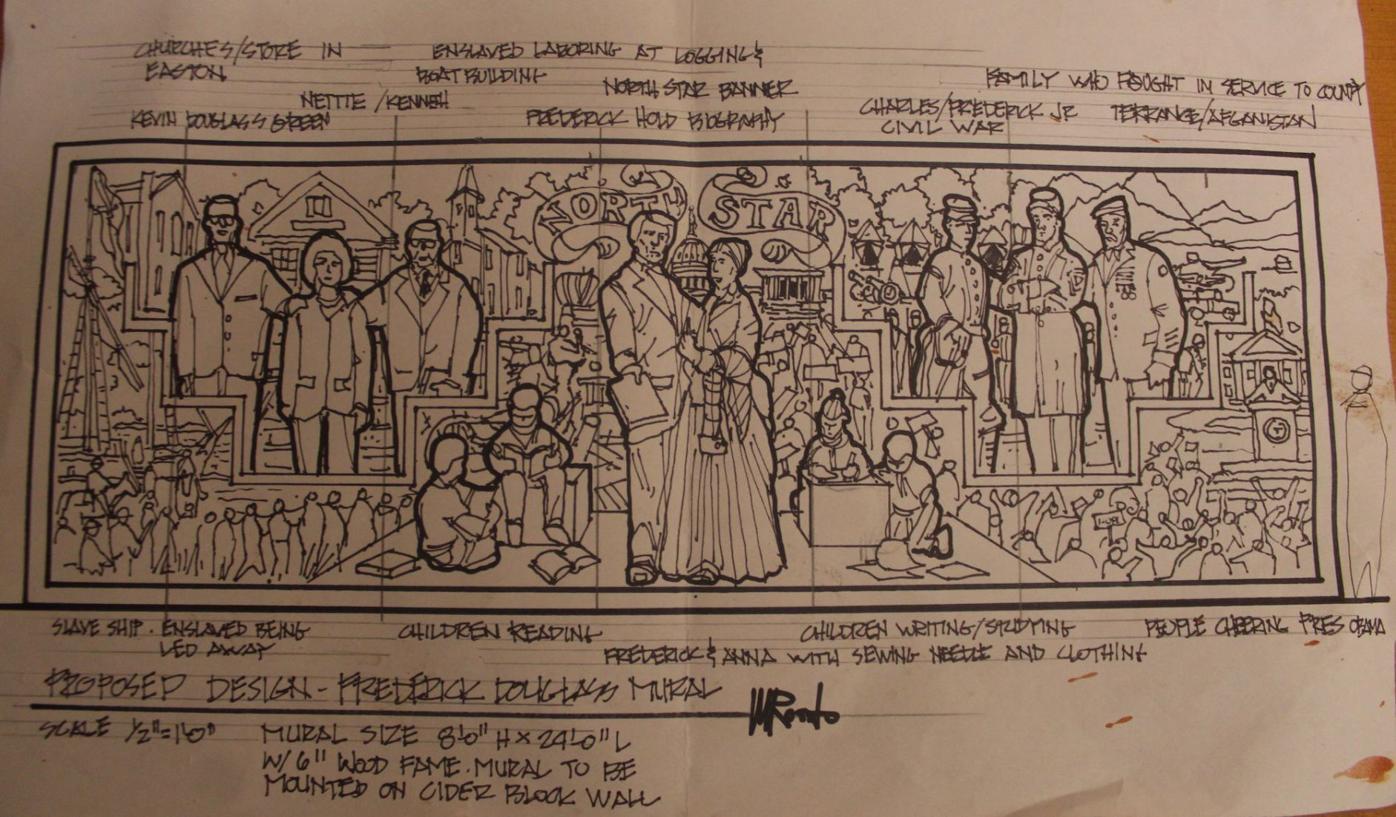 A design sketch of the Fredrick Douglass mural. 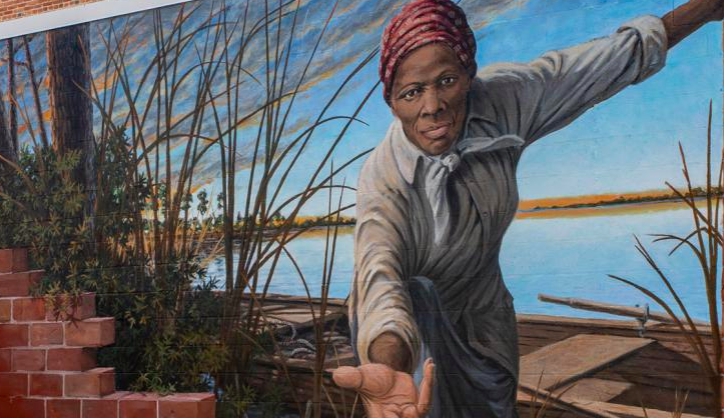 Michael Rosato works on the mural in his studio in Cambridge March 4. (The full mural is not being shown in order to keep it as a surprise for viewers).

Michael Rosato in his Cambridge studio March 4. The famous artist is working on a mural to commemorate Frederick Douglass in Easton. (The full mural is not being shown in order to keep it as a surprise for viewers).

A design sketch of the Fredrick Douglass mural.

EASTON — A large mural depicting the life, history and influence of Frederick Douglass will be placed on a building in The Hill before the end of June. The announcement follows a decade of action to honor Douglass, including a 2011 statue of him at the Talbot County Courthouse and a 2018 cutout in Tuckahoe State Park, as well as renewed interest in the famous abolitionist post-George Floyd.

The mural is set to be placed on a 10-foot-by-27-foot wall at an undisclosed spot on The Hill. Along with the statue and park, the painting is meant to continue the story of Douglass, who was born in Talbot County more than 200 years ago and became a leader of the abolitionist movement.

“It’s keeping the story going with the mural being a permanent structure,” said Tarence Bailey Sr., the five times great-nephew of Frederick Douglass who is spearheading the effort to get the mural up. “This is going to take your breath away. There’s no other place that has this depiction.”

Bailey hired Michael Rosato to create the mural. Rosato is famous for painting the Harriet Tubman mural in Cambridge, which has drawn national attention for the powerful and lifelike image of Tubman extending her hand from the street art, painted on a wall downtown.

Rosato wants to replicate that same realism, empowerment and emotion with this mural, which not only represents the life of Douglass, a famous writer and orator who helped lead the fight to end slavery in the 19th century, but also the trials and tribulations of the African-American experience.

“It’s a story of human triumph,” said Rosato. “It’s going to be absolutely stunning. Telling the story of a remarkable person is what I live for.”

The mural is essentially a timeline. Frederick Douglass, his first wife Anna Murray Douglass, and his descendants are blown up in the centerpiece of the mural. But the painting also depicts the very beginning of the African-American story in the United States and extends that through a chronological timeline to the present day, featuring the civil rights protests in the 1960s, and running all the way to the White House, where both former President Barack Obama and current Vice President Kamala Harris are pictured.

“It tells (Frederick Douglass’) story, but also how he influenced the events afterwards. People will start to realize how important of a voice he was,” said Rosato. “I think leaders today are still affected not only by his life, but by right and wrong (from his teachings). ... There are teachable moments in it, which is important for public art.”

Rosato, who is working on the piece at his studio in Cambridge, couldn’t spoil too much about the mural since the work is meant to be a surprise and has multiple sections. But he mentioned the mural will be positive and share images of hope and joy across a vast period of time.

Viewers will see Douglass’ newspaper The North Star; portraits of the abolitionist’s descendants, showing how they are shaping the world today; and even the “children of the future.”

“There are some things that are hard to look at,” Rosato explained, “but there are many things anybody can take pride in.”

While the planning and zoning commision still has to approve the final location, and other site plans and miscellaneous items need to be reviewed, the Easton Town Council expressed strong support for the project at a March 1 meeting.

“I think it’s an exciting project that’s going to add a lot to the area,” said Al Silverstein, a town councilmember.

“The Hill is a near and dear neighborhood,” she said. “I live in The Hill, and this is going to add tremendous value and a beautiful piece in the neighborhood.”

Bailey, who has been helping to tell the story of Frederick Douglass for much of the past decade, knew he had to get a mural up on The Hill after seeing the Harriet Tubman painting in Cambridge.

Bailey lives in The Hill, a predominantly Black community in downtown Easton, and Douglass had also been involved in the community there during his life, so it was only natural to place the mural there.

“He walked the streets,” said Bailey. “I heard stories that he came down to Easton and I knew I would really like one here.”

In 2019, Bailey and a family friend from New York decided to put the plan into action. The friend invested money into the mural project, paying for the entire painting and work-related costs from Rosato.

The COVID-19 pandemic brought the process to a screeching halt, but Rosato and Bailey have since picked up where they left off. Rosato, who is painting it with expensive acrylics, expects to finish the mural within the month.

Bailey said he is encouraging donations through the Mid-Shore Community Foundation, but does not have an amount he needs to raise at the moment.

Vanhooser, who is also leading the development of the Frederick Douglass Park on the Tuckahoe, said the mural will attract visitors to Talbot County.

The mural is “another piece of the storytelling puzzle. Since I got here, people have been coming here looking for Douglass,” she said. “There’s the statue, the park — it’s another storytelling element that will be there for visitors to see.”

Vanhooser said it’s also “very exciting because you can learn something about Douglass,” and it supports her vision of expanding the commemoration of his iconic life, a long-term goal she has had since becoming tourism director in 2016.

“I had envisioned some mural projects when I first came here,” she said, saying there are only a few in the county. “We need more murals in Talbot County.”

The mural itself is large, abstract and ambitious enough to spark conversation and be open to interpretation. Rosato said he’s always had that goal — to invite people into conversations they are not used to having. Public art, he said, is one of the best ways to open the door and strike that dialogue.

“When we put it on a wall like this, everyone who comes into contact with it will have to engage,” Rosato said.

Bailey said it’s important to expand the conversation in this way because Douglass has not always been accepted in the community, despite having grown up here — there was strong opposition to installing his statue in 2011, and at one point in time “he was considered a terrorist.”

But over the past decade and especially after the death of George Floyd last year in Minneapolis and the rise of Black Lives Matter, “there’s been a resurgence of interest” in Douglass and his works, added Vanhooser.

“Social issues have arisen that have caused him to rise to the forefront,” she said. “I’m personally inspired by his words. They transcend time to me.”

Rosato hopes this mural will bridge a connection to people across the political spectrum.

He highlighted one example of a mural he created, which depicts an African-American activist, lawyer and school teacher, Thomas Calhoun Walker. It’s up in Gloucester, Virginia. One passerby had questioned the mural in front of Rosato, saying it seemed threatening to him because an African-American man was thrusting a cane from the wall. He then cited concerns with the Black Lives Matter riots.

“He said, ‘This is tacky.’ I said, ‘What is tacky about it? Is it the fact that there is a 20-foot African-American with a cane? Are you not happy with the fact you have to come by everyday and confront imagery you are not used to?’” Rosato recalled. “I told him the story and the reality was that (Walker) was walking around and poking at anyone he knew. I told him that symbolized what he was all about.

“By the time I finished (Walker’s story) he apologized to me and said, ‘I’m gonna go back and tell my friends we were wrong to judge the mural.’ It changed him and I saw the look in his face and I heard it in his voice. This is what’s powerful about public art. ... When he started to apologize, it wasn’t because I reprimanded him. I just told him a story.”