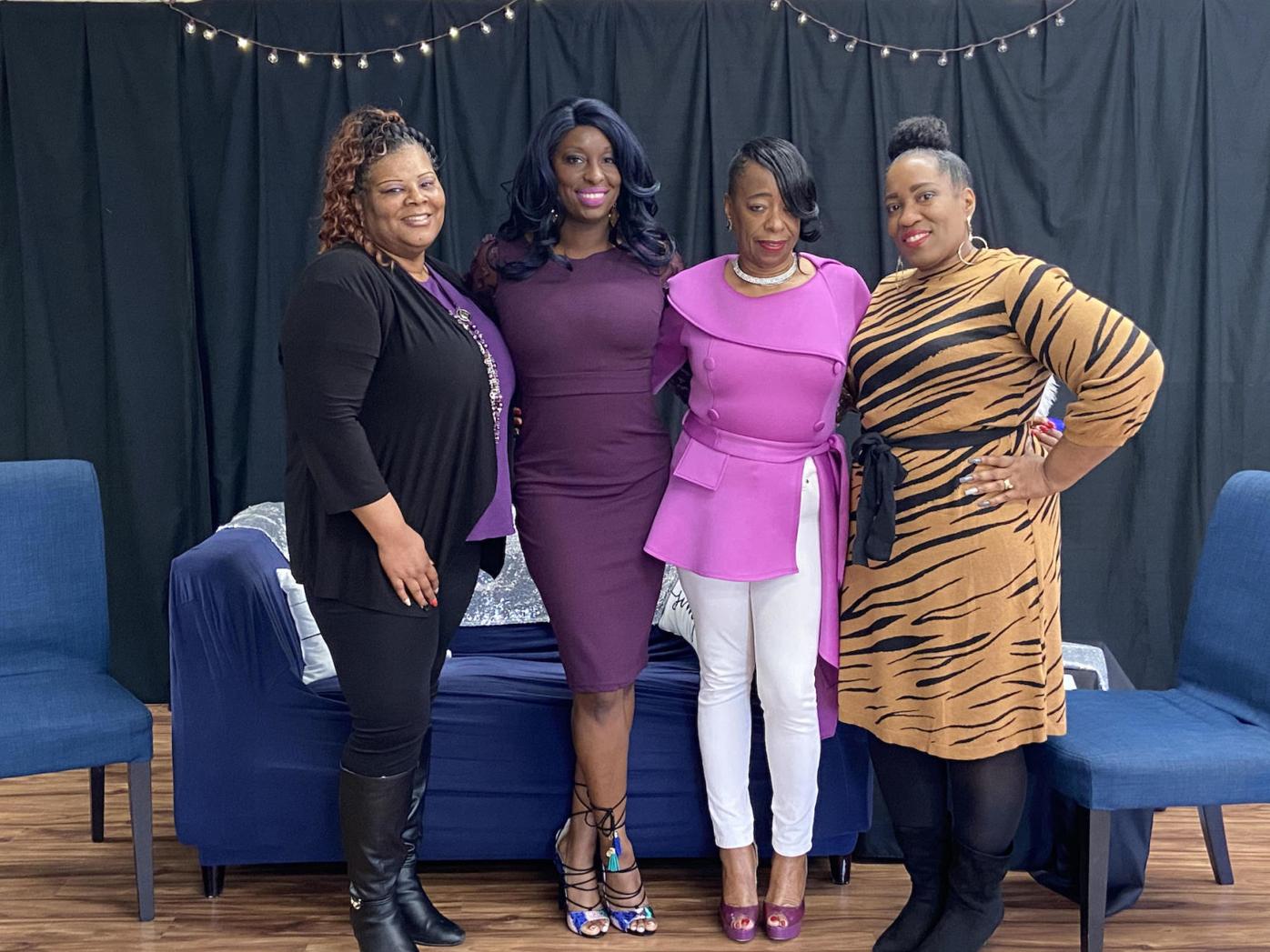 Tamika Hall, second from left, is pictured with the women whose stories are told in her documentary film “She Wins! Beyond the Bruises.” The film was set to be released at Garfield Center for the Arts in Chestertown. However, its release date was pushed back due to COVID-19 closures. Pictured, from left: Robin Sample, Hall, Anne Sewell and Ira Warren. 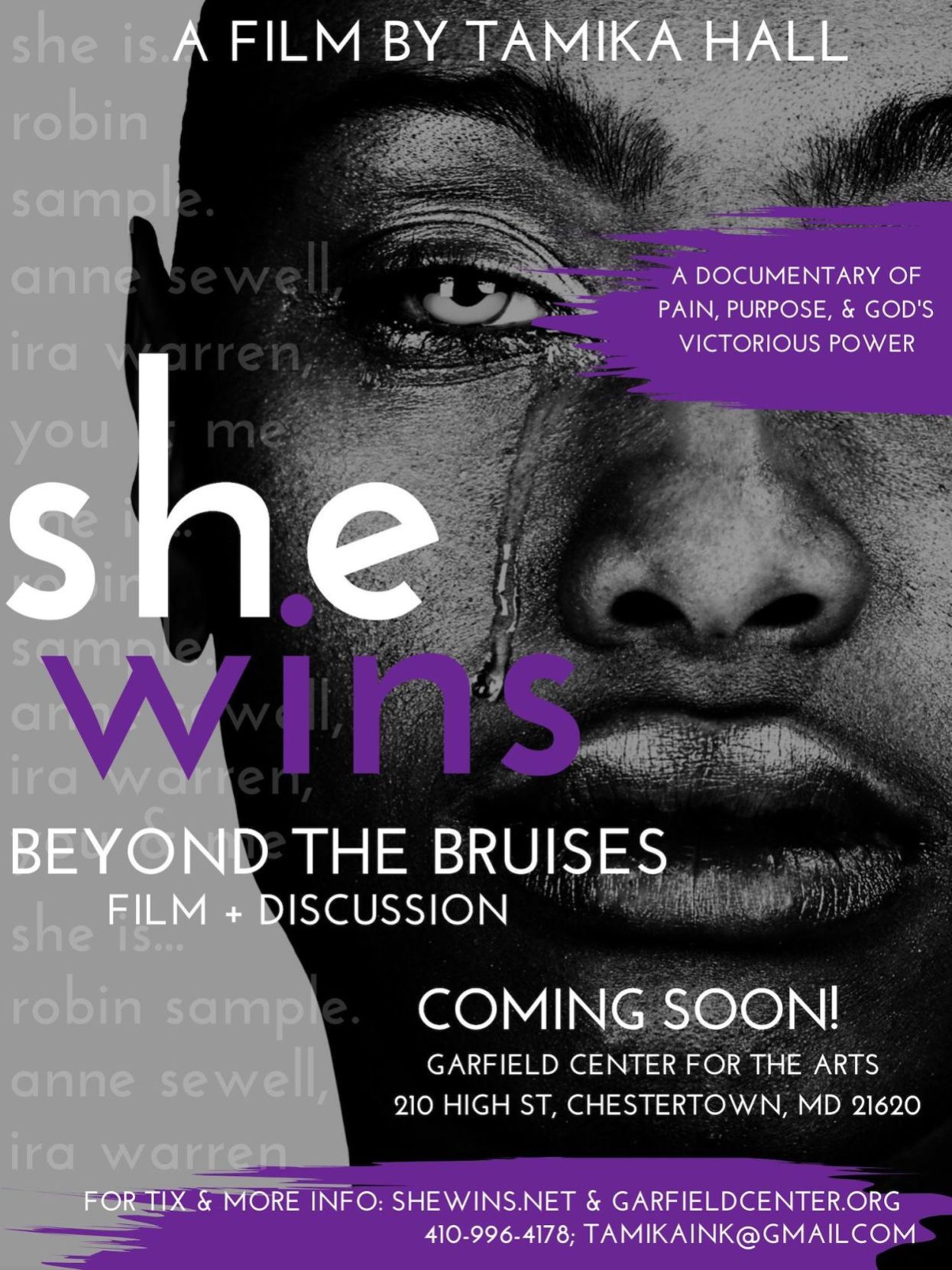 COVID-19 canceled the planned premiere last month of “She Wins! Beyond the Bruises” at the Garfield Center for the Arts.

Tamika Hall, second from left, is pictured with the women whose stories are told in her documentary film “She Wins! Beyond the Bruises.” The film was set to be released at Garfield Center for the Arts in Chestertown. However, its release date was pushed back due to COVID-19 closures. Pictured, from left: Robin Sample, Hall, Anne Sewell and Ira Warren.

COVID-19 canceled the planned premiere last month of “She Wins! Beyond the Bruises” at the Garfield Center for the Arts.

CHESTERTOWN — When Tamika Hall releases her documentary “She Wins! Beyond the Bruises,” the occasion will mark firsts for both Hall and the Garfield Center for the Arts.

“She Wins! Beyond the Bruises” tells the stories of three women who overcame domestic abuse. It is Hall’s first film and will mark the first time the Garfield Center has played host to a film release by an African American female filmmaker.

“Literally every time I even think about it, it brings tears to my eyes,” Hall said. “My grandparents, the only way they could go to the movies there — they had to sit in the balcony.”

“She Wins! Beyond Bruises” was set to be released at the Garfield on March 21, but COVID-19 canceled that.

A native of Kent County, Hall grew up in the Big Woods area. She is a graduate of Kent County High School and Washington College — where she majored in theater. Hall has worked in education — for a time, as the dance teacher at the county’s high school. She now is based in Philadelphia, where she works at a charter school teaching students in kindergarten through eighth grade.

Hall also is the creator of the online radio station, iworship96-fm-radio.website-radio.com, which is “heard in over 60 counties and has over 5 million listeners,” she said.

In Hall’s words, the goal of the documentary was for all viewers to see and understand domestic violence is real. She said she would like the film to be used as a “conversation piece.”

“Because (the film) is faith based, I wanted it to be something domestic violence agencies could use. That churches can use it. That people can watch it in their homes,” Hall said. “I want them to understand that even though domestic violence is very real, that you can have a plan and that you can get out. When you get out, you don’t have to stay stuck as a victim for the rest of your life.”

Hall noted the importance of showing women whose lives have “progressed beyond the trauma of domestic violence.” She said the three women she profiled were within “inches, moments” of their lives ending, but “they all lived to tell the stories and they’re all advocates now.”

“I wanted people to see that it absolutely can happen,” Hall said. “You can go through something horrific, but you can come out of it on top. That’s what I hope people will gain from this.”

A news release summarizes the film as profiling “the lives of Robin Sample, Anne Sewell, and Ira Warren, three women who have found themselves on the brink of death and lived to tell about it.”

Hall said she first connected with these women by sending a call out for women willing to tell their stories of survival on social media.

“Growing up in the country, on the Eastern Shore of Maryland, you learn how to utilize social media to just get your work heard and seen,” Hall said. “We had, within two days, over 50 submissions from women literally around the country. I mean, it was incredible.”

The three women featured are from as close as Cambridge and Washington, D.C., and as far away as Texas. Hall said she began the process with eight women, but trial and error narrowed it down to three, which she said was “honestly the best thing that could have happened” for the documentary.

Hall said the documentary is structured so one story is told directly after another. She said each woman’s story is so “individually traumatic and inspiring at the same time, so I wanted to give them all their rightful due.”

“Not only are you going to see the women recount their life in domestic violence and how they got out of it, but we also have actors who actually act out the vignettes within it, as well,” Hall said.

Hall is a survivor of “teen dating violence,” the release states. She began her advocacy work while still in high school. She later worked as a victim advocate for the Mid-Shore Council on Family Violence. She also is the author of “Love Doesn’t Leave Bruises.”

Noting the “cool thing about being an independent artist” as having control over the timeline for production, Hall said she first had the idea for the film in May after she hosted a women’s conference in Chestertown. Hall said she was looking for “something more to be empowering to women, so that’s when I decided to start working toward” creating a film.

Hall’s friends Tee Tunnell Harris of The Keys Productions, who wrote and co-directed the film, and Tanessa Kassa, editor of Studio 707 Graphic Designs, ended up helping her write, shoot and edit the film after the first production team she worked with “messed up” the footage.

“They totally botched the first filming,” Hall said. “I wanted to give up, I’m not going to lie.”

However, she said it was her friend who encouraged her to keep working on the project. In November, filming picked up again and was ready for release by March. Filming took place in a studio in Philadelphia with some scenes filmed in actors’ homes in Delaware. Noting the family-like atmosphere the project took on, Hall said her youngest daughter even ended up contributing to the effort by holding the boom mic.

Hall called the process exhausting but said she is so excited with the finished product.

Speaking to the personal importance of releasing her film at the Garfield, Hall said a few years ago she wrote and produced a Black History Month play there, but her grandmother was afraid to see it there.

“I understood that, for her, black folks weren’t allowed to do that in her time,” Hall said. “So now, to be walking into the space as a filmmaker and the first African American female filmmaker, it’s so special.”

Hall said Marlon Saunders — who Hall called family because he also is a native to the Big Woods area — was the first African American man to release a film at the Garfield Center.

“It’s such a cool thing that it’s like our family has broken a barrier that, in 2020, who would even think it was still there,” Hall said. “Who would think we’re knocking down history? It is probably one of the coolest experiences of my life. That’s why I’m like I don’t care when we can get in there — we are releasing it (at the Garfield).”