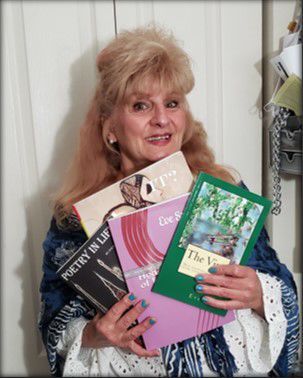 Born to an ambassador father and entertainer mother, the California resident travelled the world. But her life changed when while living out of her van for a while, she was diagnosed with cancer and said she lost everything.

While at college, she launched a first time historical assembly titled “Unity in Diversity” in Charles County and ended the forum with two of her original poems.

She has received awards and accolades for her writings and was cited in a “Who’s Who of Poets in America” collection.

Her book is available at www.amazon.com.

How long have you been writing, and how did you get started?

[Being homeless and having cancer] I had to reinvent myself for a new vocation, and reentered college again. While living in my van, I did much writings after my classes to pass the time.

What inspires you to write?

My mother was an entertainer and my father an ambassador and they traveled much abroad. Therefore, my grandmother would buy me paper to write and draw on. For that reason, I started to create books, and illustrated them. Later in college to obtain my degree, I took literature and wrote poetry. My professor had me recite it, and she said, “One day you will write your own books,” and through her inspiration I did.

Do you consider writing to be a career?

Yes, I would like to fund my nonprofit through my writings, which is my objective aim, and someday my life stories will be made into a movie. As well, my [passion for] works of art, posters, designer clothing, manufactured articles and more. I believe those projects can create a good income. My goals and imagination is limitless.

What kind of writing process do you use?

The same as my life experiences, which through many series skilled in unpredictable fluctuations. Accordingly, I enjoy freestyle for my posters, stickers, T-shirts, arts, textile designs, and so much more, and my rock garden, and yard exhibits those talents dynamically. I have cultivated the ability to unlock, step out, and to think out the box. It’s great to the mind.

Who are some of your favorite authors and why?

There are many good authors, but I will mention a few poets such as Robert Browning. His poems are well known for irony, and satire, characterized by baffling humor, social explanation, and historical settings, same as I like to write. Edgar Allen Poe, an author best known for his dark poetry and short stories, particularly his tales of obscurity and he uses much ghastly metaphors that I appreciate, and Poe has faced much tragedy in his life. Robert Frost’s words depict such a mastermind of metaphors are beyond description and Agatha Christie inspires the detective in me, as she is a great mystery writer, which I seek to think as she does to mystify readers. I have and some day want to produce short plays, and a lifetime movie of what I have faced in my life. My motto is it’s never too late, and you’re never too old to accomplish your heart’s desire.

What do you want readers to know about you?

[My parents] called me Unity; I was a peacemaker. I organize two nonprofit organizations mainly to assist the underprivileged who are as once I was, when I hit rock bottom. However, unlike me, most are not as strong to keep positive to know after the rainstorm, the sun will shine, and then enjoy the rainbow, and breathe in the fresh clean air, which gives a new insight to a dilemma.

Please include a brief description of your book.

“When darkness is all about / Hope is the switch / While, Faith lights the way / Trust is the key / As mercy follows / Twhen, wisdom guides all possibilities / As grace overtakes / Miracles transpires / Thus exposing the mysteries / Hence, love; ends all darkness about.”