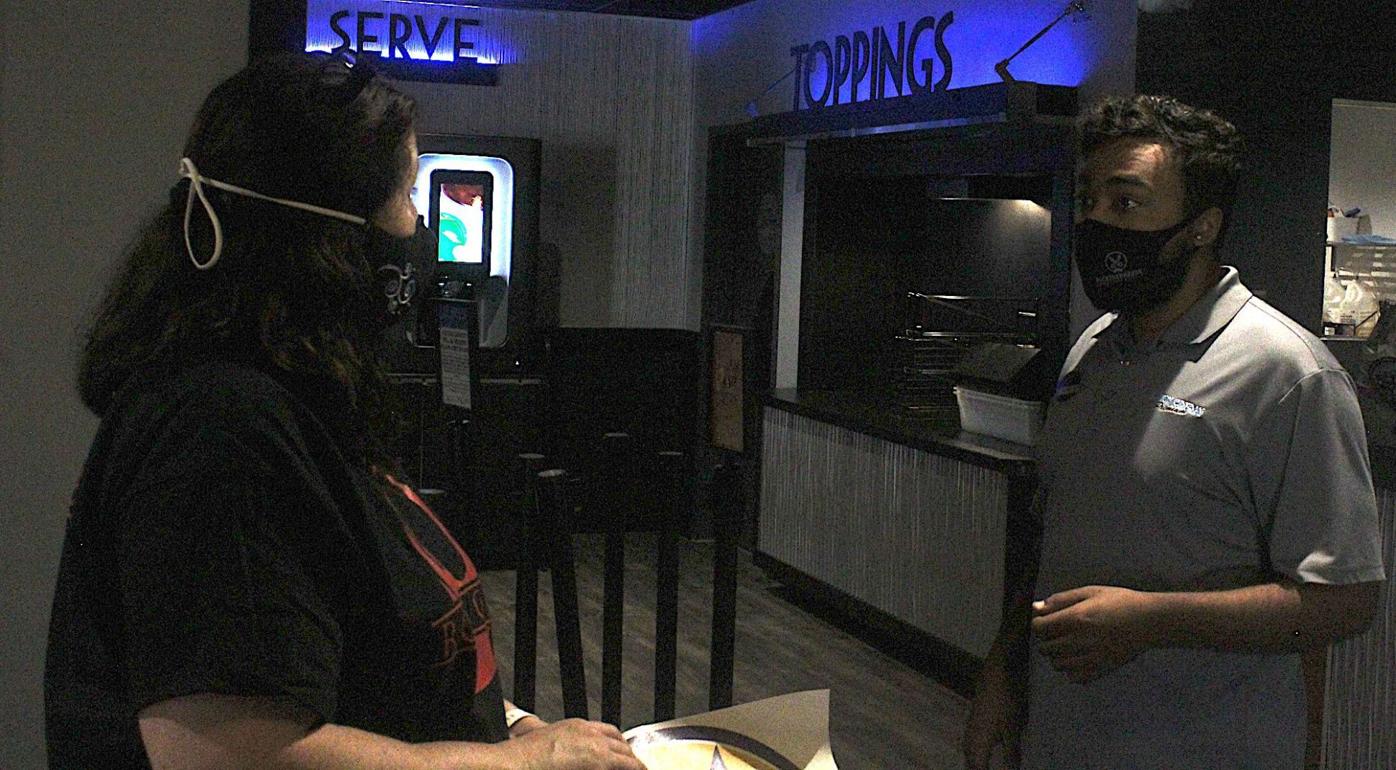 Jennifer Schultz talks to an employee at the remodeled Easton Premier Cinemas. The theater opened on Sept. 4. 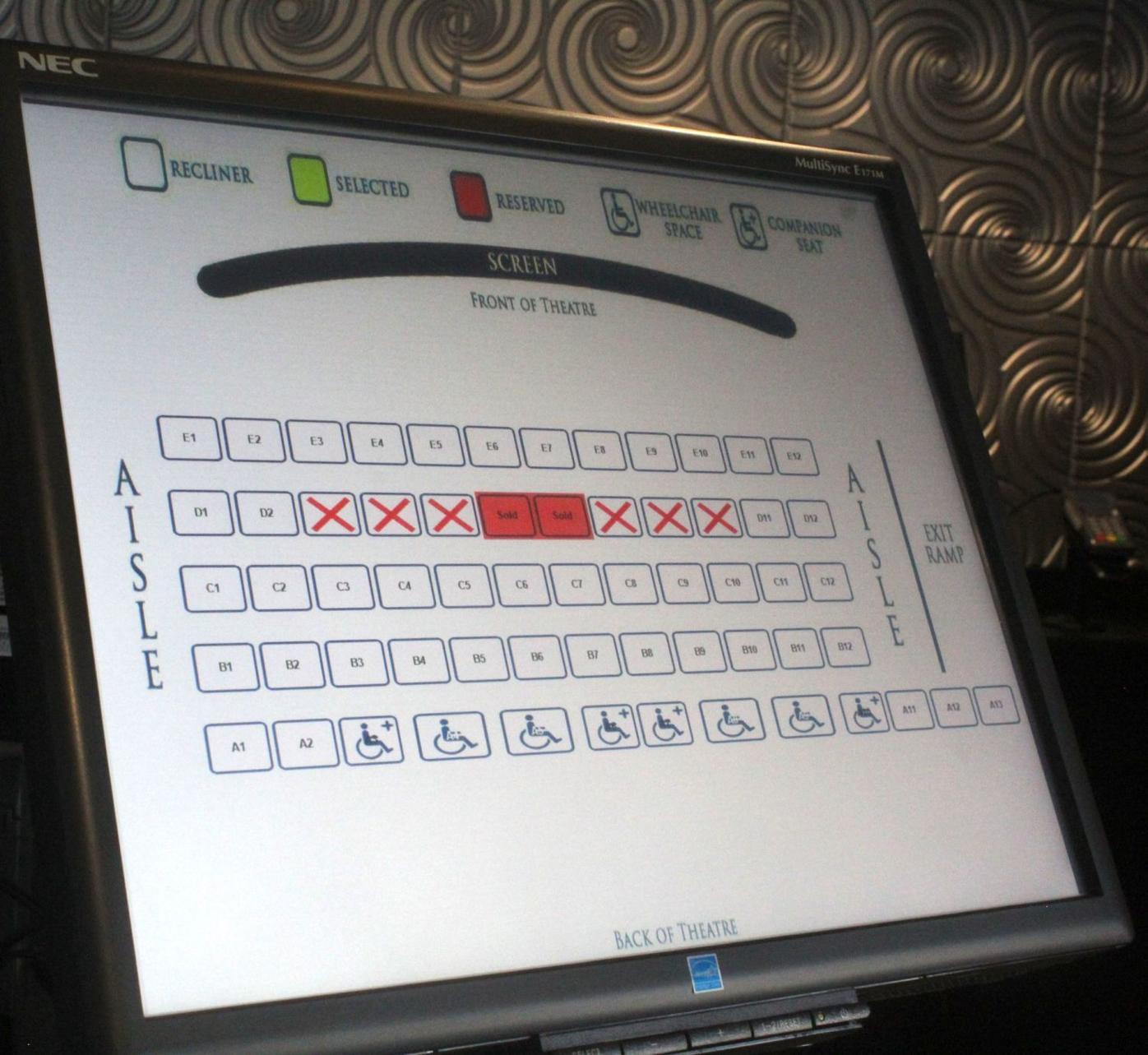 To enforce social distancing, Easton Premier Cinemas staff will ensure selected seats automatically block off three seats on either side. 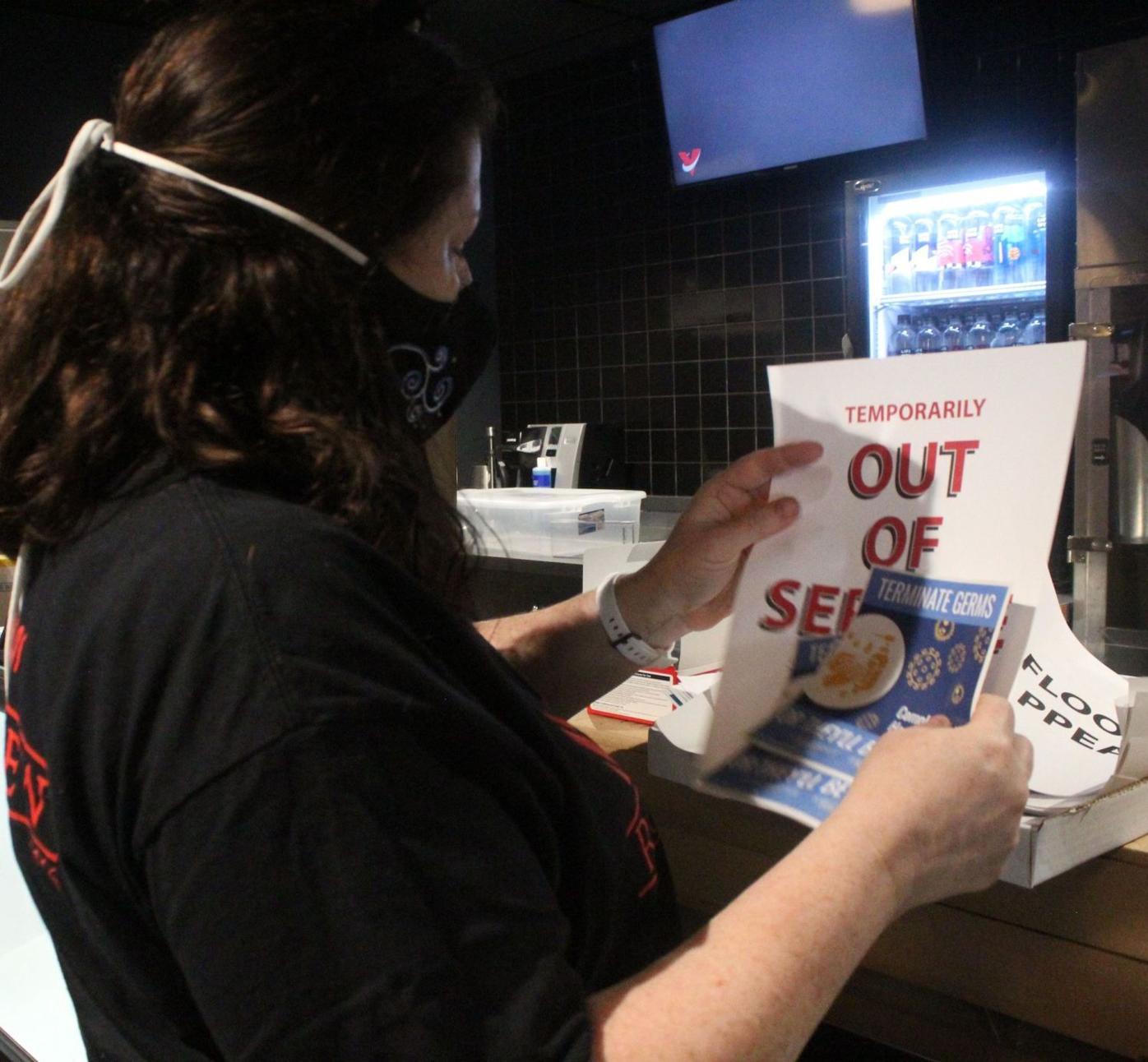 General manager Jennifer Schultz said her employees were “ecstatic” to finally reopen after a six-month shutdown. 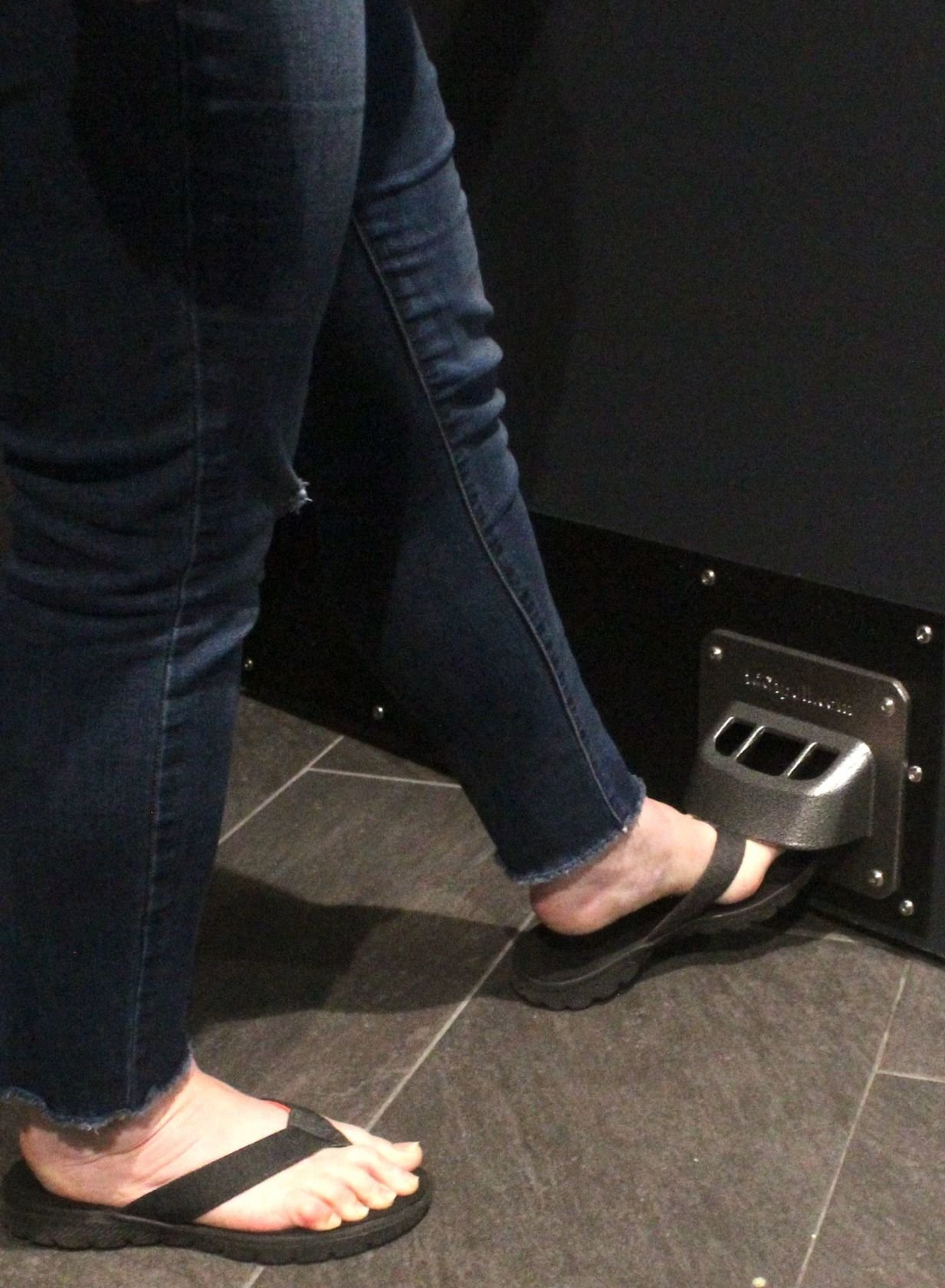 Jennifer Schultz, the general manager of Easton Premier Cinemas, shows how to open the bathroom door with a foot device so customers don’t have to touch the door handle. 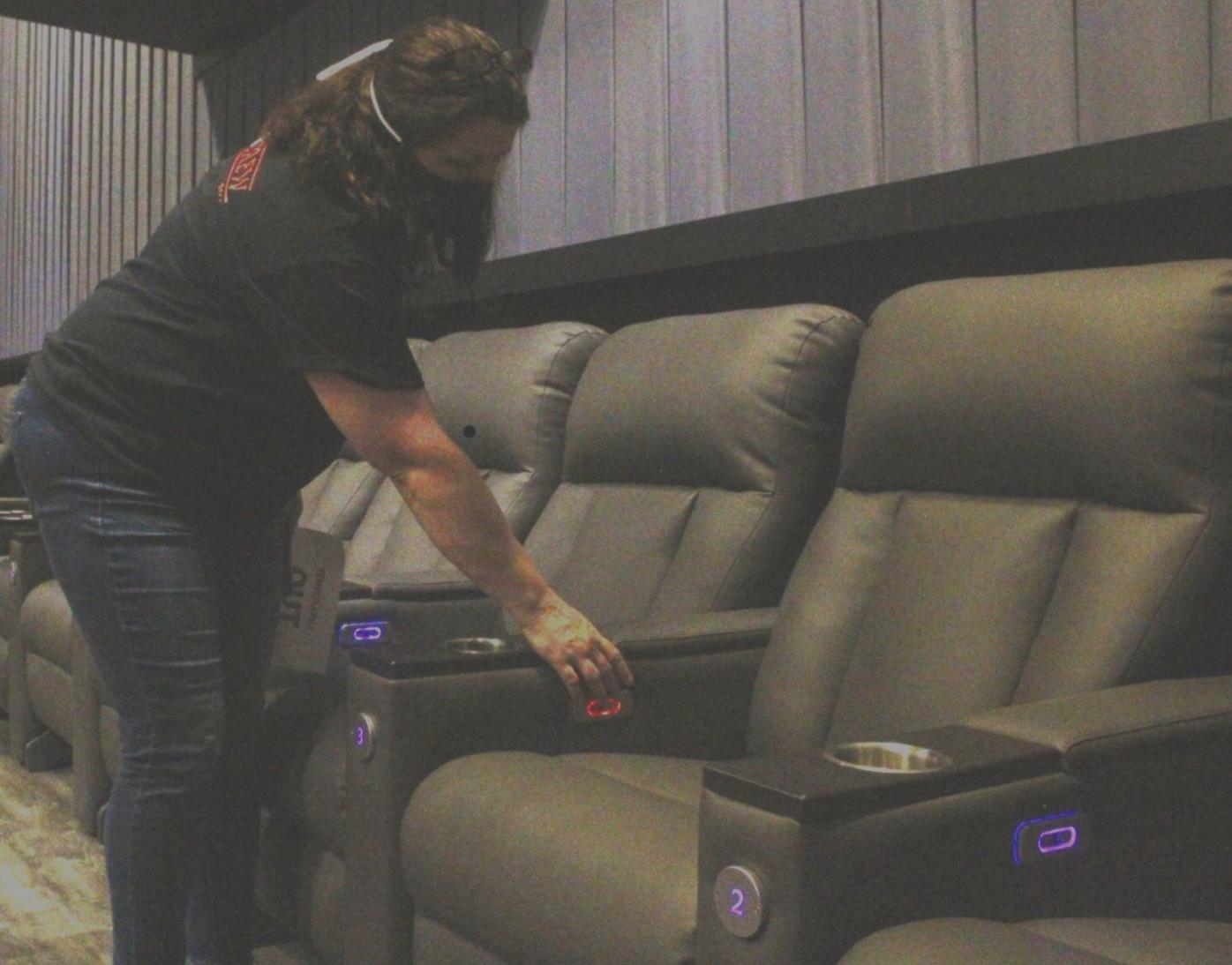 The remodeled Easton Premier Cinemas has new seats that recline and heat for the customer’s leisure. 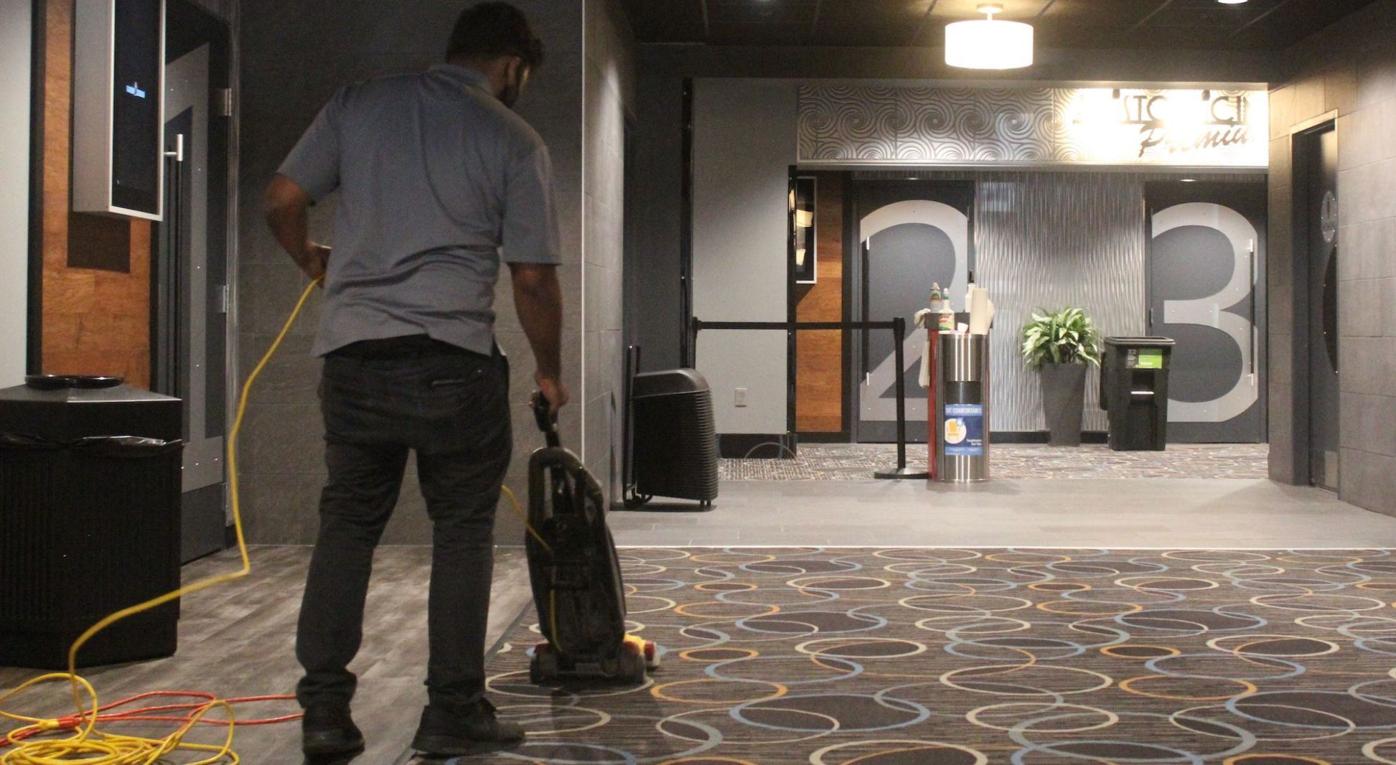 An Easton Premier Cinemas employee vacuums the theater hours before it opens on Sept. 4.

Jennifer Schultz talks to an employee at the remodeled Easton Premier Cinemas. The theater opened on Sept. 4.

To enforce social distancing, Easton Premier Cinemas staff will ensure selected seats automatically block off three seats on either side.

General manager Jennifer Schultz said her employees were “ecstatic” to finally reopen after a six-month shutdown.

Jennifer Schultz, the general manager of Easton Premier Cinemas, shows how to open the bathroom door with a foot device so customers don’t have to touch the door handle.

The remodeled Easton Premier Cinemas has new seats that recline and heat for the customer’s leisure.

An Easton Premier Cinemas employee vacuums the theater hours before it opens on Sept. 4.

EASTON — After a six-month shutdown, Easton Premier Cinemas made a triumphant comeback on Sept. 4, selling “dozens” of seats and proving some are still willing to head out to the theaters despite the ongoing COVID-19 pandemic.

”We had very short notice on opening,” said Janet Oprendek, the vice president of Flagship Entertainment, which owns the theater. “But it was a pretty good turnout for September.”

The cinema opened at 50 percent capacity, with only 95 seats available, and premiered with just two movies, “New Mutants” and “Tenet.” Still, the theater’s resurgence is testing the waters on the moviegoing experience during a pandemic.

Normally they’d have a larger showing on a weekend, but staff were happy just to reopen, general manager Jennifer Schultz said.

“It was a huge relief,” she said. “My staff were ecstatic and going stir crazy. We know it’s going to be slower at first, but we’re hopeful.”

The theater doors are now open everyday, with adult tickets available online, starting at $9.25 for adult tickets and $7.25 for an adult matinee. Discounts are available for seniors, members of the military and college students.

Theaters began reopening in some states as early as May, but mostly toward the end of August, with approximately 2,800 now open across the U.S.

Renovations at Easton were finished in time for its reopening, so moviegoers were surprised with brand-new seats, floors and sleek interior decorations. The new seats are heated and extend outward for customers to splay their legs.

Two more theaters are set to reopen at EastonPremier Cinemas in the near future, Schultz said. The theater had been expanding before the pandemic hit.

Gloria Faulkner has gone to the theater for “years” and was overjoyed when the theater finally reopened. She plans to see “New Mutants” or “Tenet.”

“I want to support the theater so we don’t lose it,” she wrote in a private message on Facebook. “And the seats are super comfy. They look beautiful.”

Initially, staff were worried customers wouldn’t feel safe, Schultz said, but she and her employees worked night and day to get the theater up and running. They transformed the theater into a friendly, COVID-free space and advertised their changes on Facebook to assure customers of its safety.

Among the changes are six-foot distancing requirements and circles spread out on the floor to indicate where customers should stand. Staff will be cleaning once an hour. They also installed a foot door pull to open the bathroom door without touching the handle and a mask mandate enforced by a patrolling employee.

Faulkner wrote that she wasn’t concerned about safety at a movie theater because bars, gyms and restaurants are similarly risky.

“I’m not worried — I work in a restaurant,” she said. “I believe they will keep them cleaned up.”

Schultz is confident people will return to the theaters over time, once they realize it’s safe.

“We’re going above and beyond what the recommendations are,” she said. “But coming to the theaters is a luxury, a choice. We’re still waiting to find out what the new normal is, and we’re just focusing on opening.”

Schultz was able to bring back all but three of 50 employees who were initially laid off. And though the cinema missed a large chunk of the hot spring and summer season, it typically picks up again around the holidays.

The future might be uncertain, but it could have been a lot worse, she said.

“If we hadn’t opened by the end of the year, things would have been dire,” Schultz admitted.

Even before the pandemic, theaters faced shoestring budgets and an uphill battle against popular streaming services such as Netflix and even Hollywood studios, which snatch an 80 percent cut from ticket sales.

With COVID’s arrival, some theaters have approached bankruptcy, including AMC.

But the moviegoing experience is a communal, shared moment with friends and family that cannot be replicated elsewhere, some argue. Writer-director Christopher Nolan wrote an opinion piece in The Washington Post in March, arguing that theaters are a “vital part of American-social life,” that support 150,000 jobs in the nation.

Nolan’s latest blockbuster film, “Tenet,” is considered a test run for theaters — specifically testing whether customers will still return to them as their preferred method for new blockbusters and films. (Some studios are releasing movies on on streaming services. Disney recently released the live-action remake of “Mulan” on Disney Plus).

”Tenet’s” run has been moderate so far, pulling in more than $150 million internationally since debuting on Aug. 26. The film cost $200 million to make and hasn’t profited yet.

Schultz doesn’t think movie theaters will fall by the wayside, though.

“I wouldn’t have been managing movie theaters for 25 years if I didn’t think that there’s something about seeing a movie with a crowd and reacting to a film as it’s happening,” Schultz said. “It’s not the same as sitting in your room.”