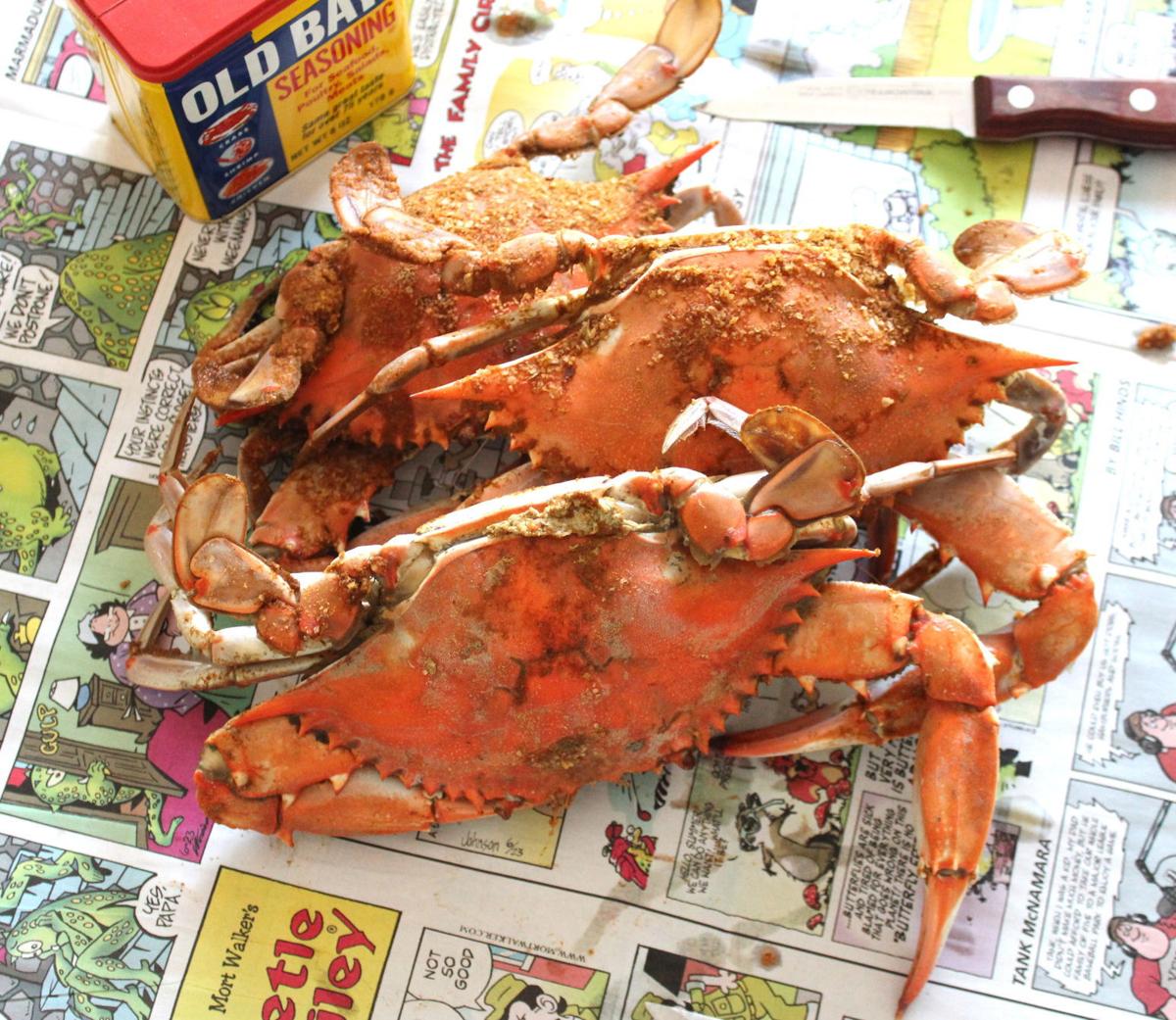 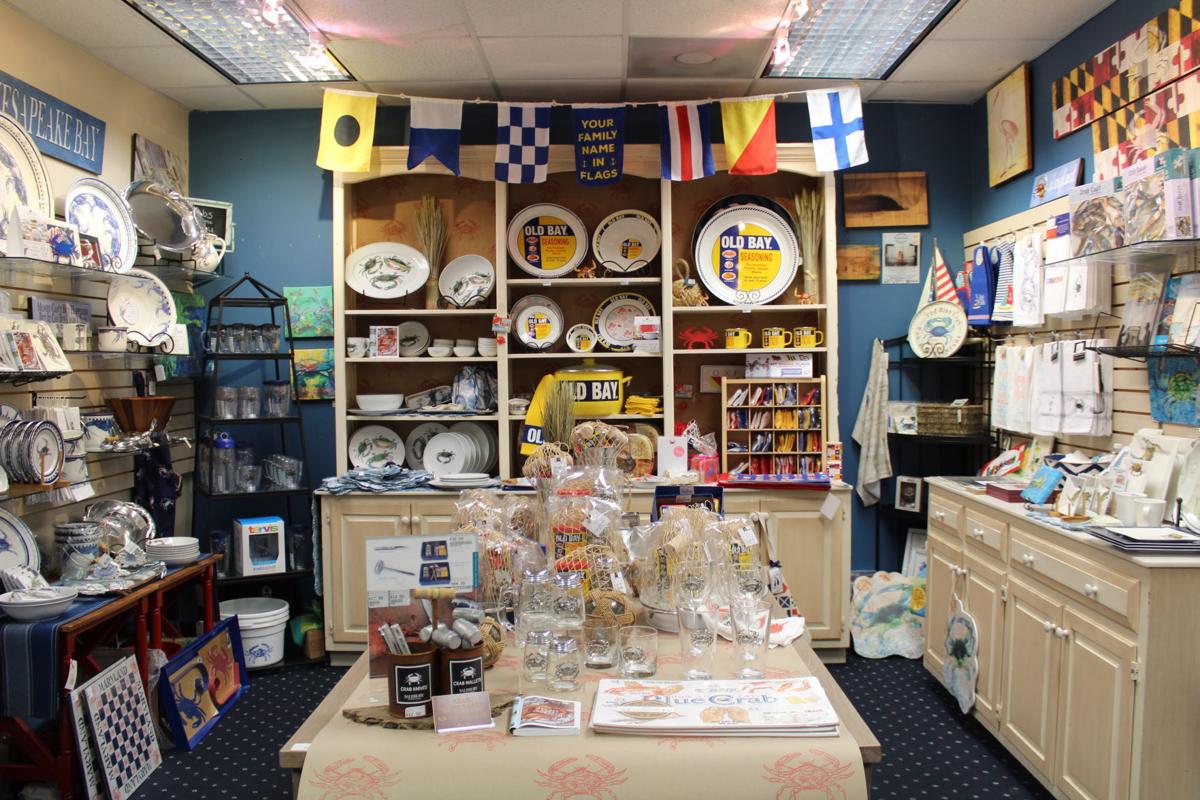 Salisbury Gift & Garden on Route 50 south of Easton has a “Crab Room,” owing to the popularity of crab-themed gifts, especially with local customers. 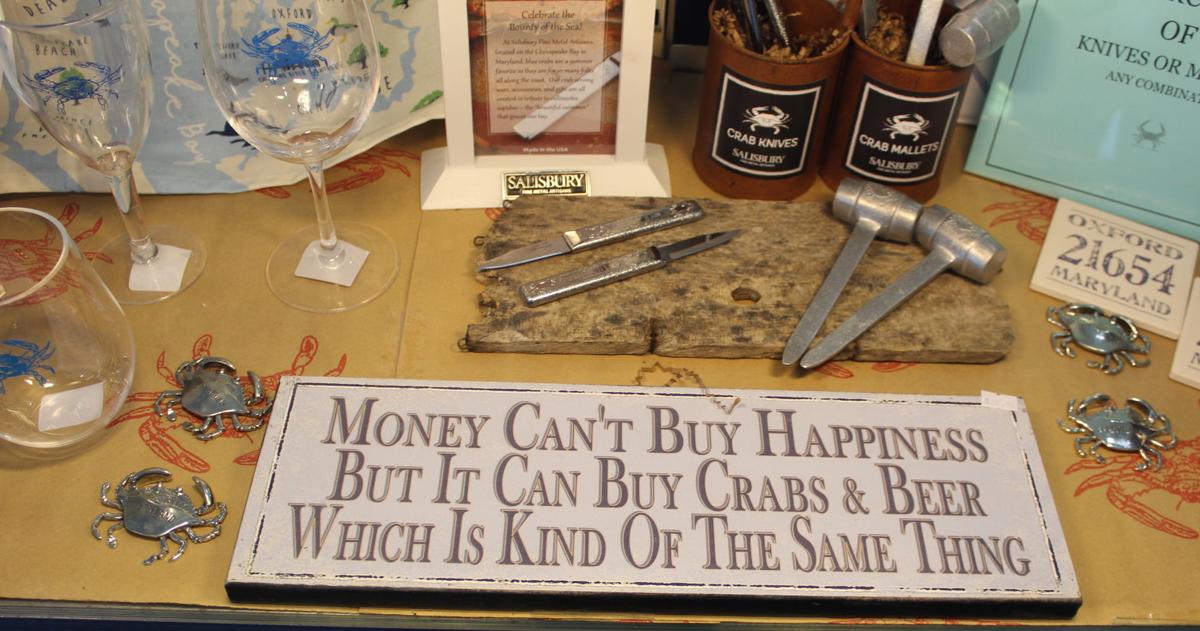 This display case at Salisbury Gift & Garden features crab knives, based on the old Carvel Hall design, and pewter mallets, the shop’s most popular gift items. 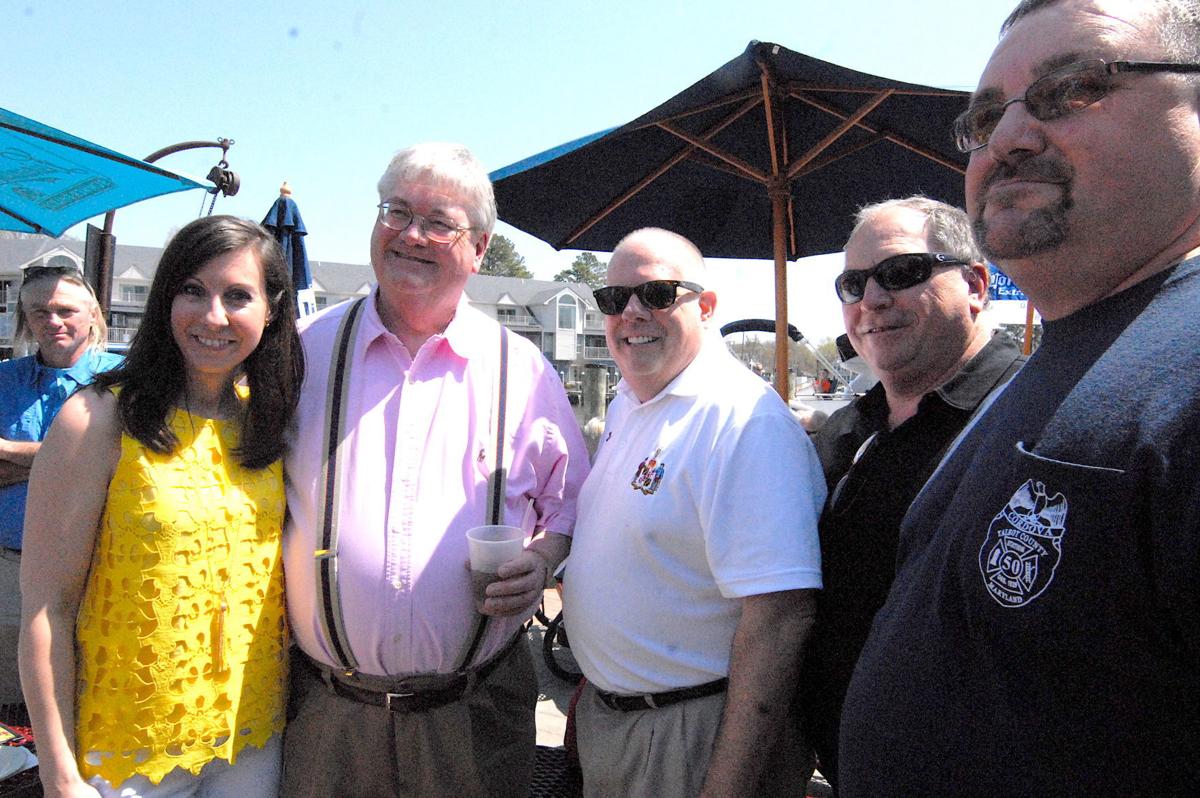 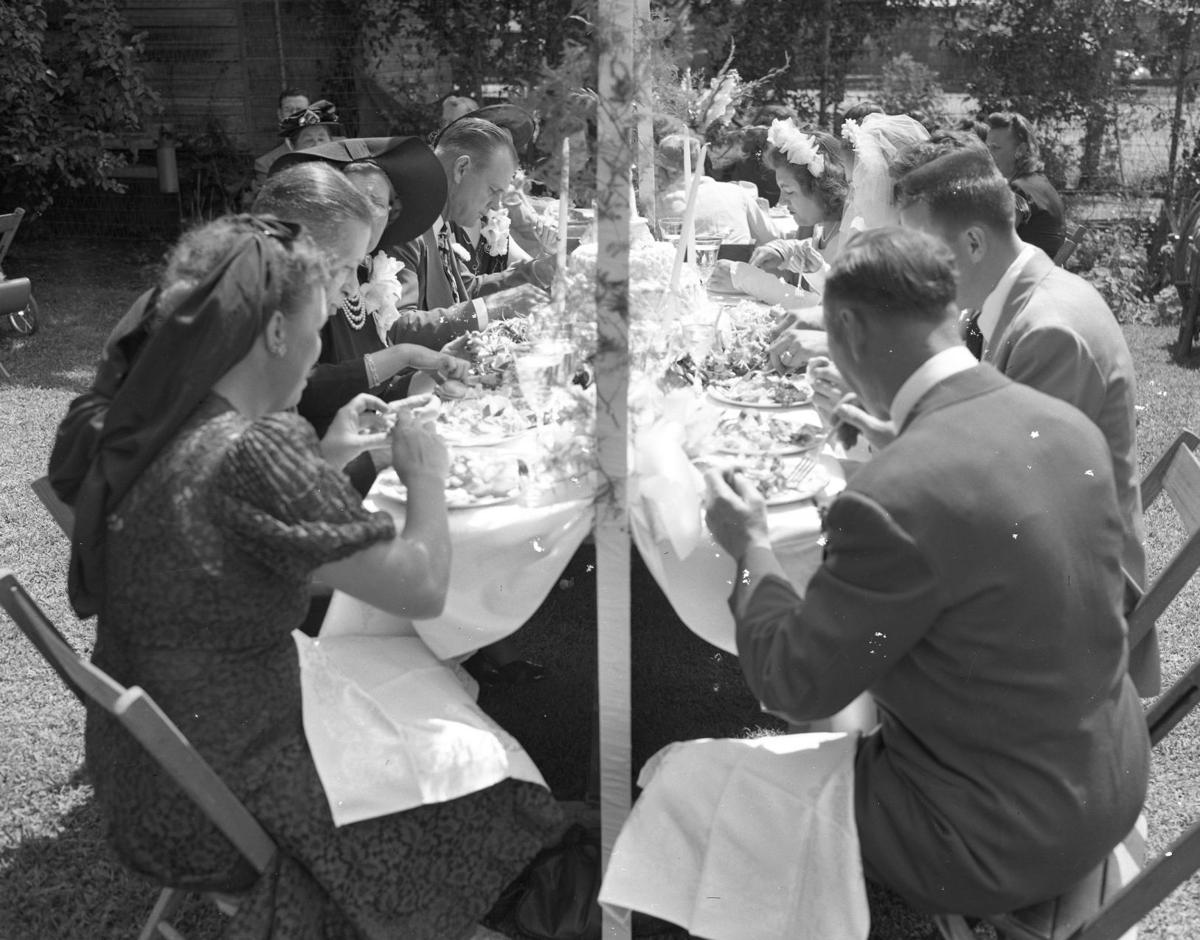 H. Robins Hollyday took this photo of the Mills-Murphy wedding banquet — and crab feast — in Talbot County, probably in the 1930s or 1940s. 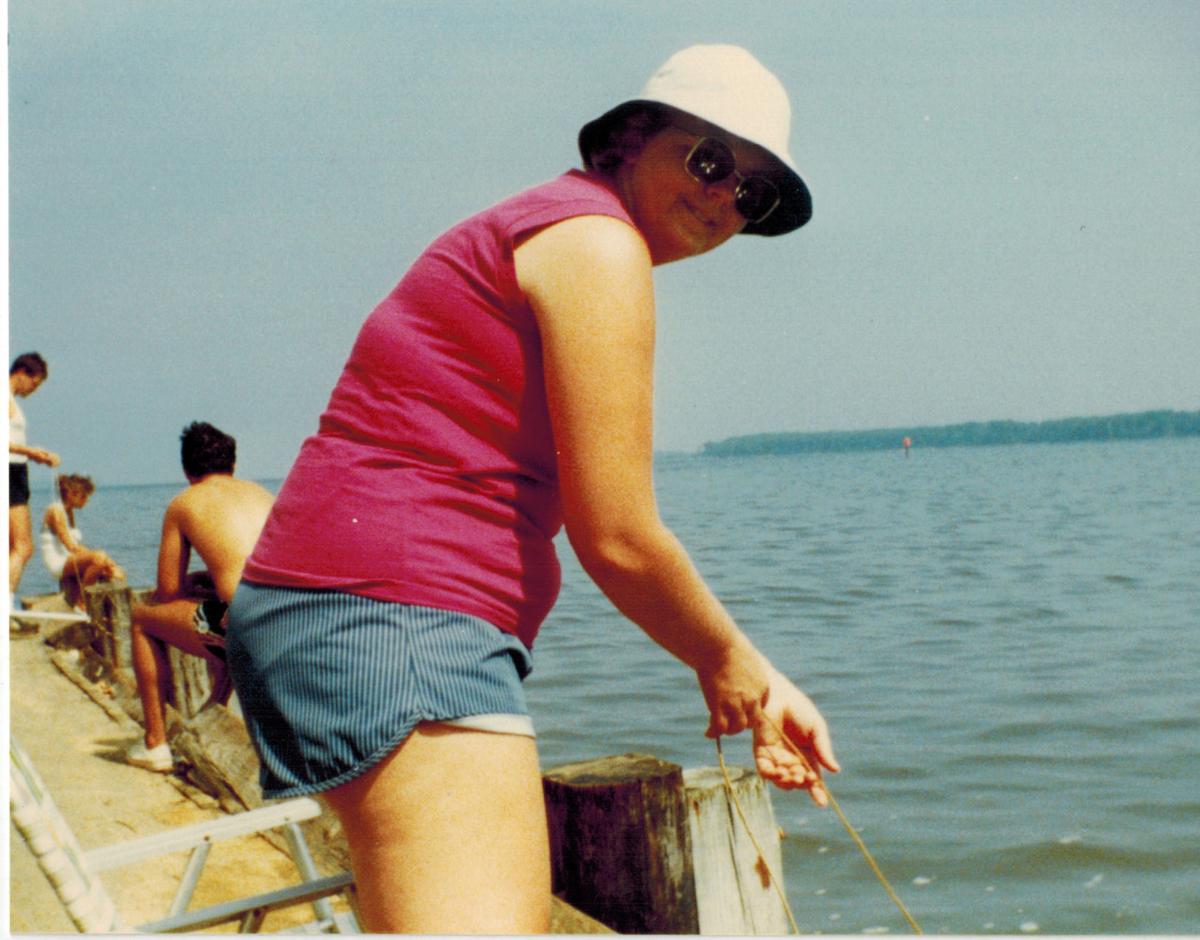 Susan Ewing Higgins of Easton “chicken-necks” in Newcomb in the mid-1980s. 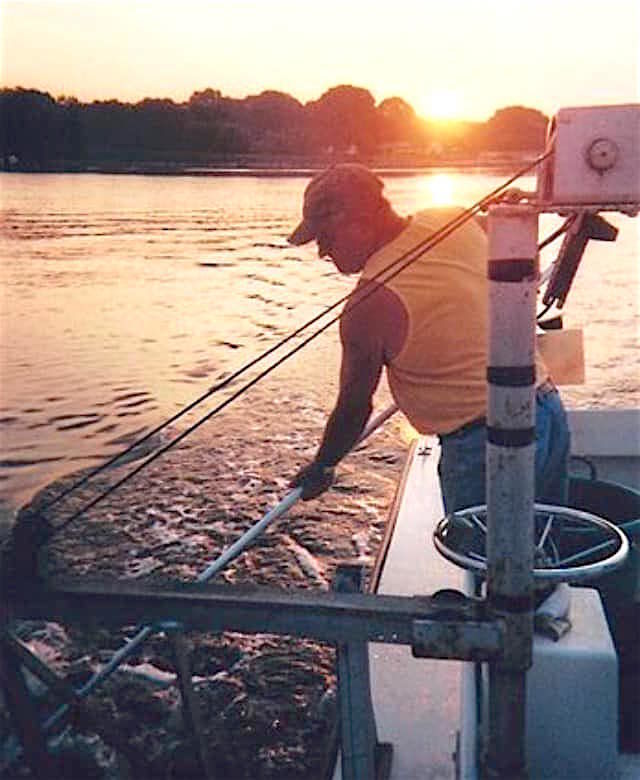 J.B. Walls of Chestertown crabs with a trotline on his boat The Bottom Line on the Chester River years ago. 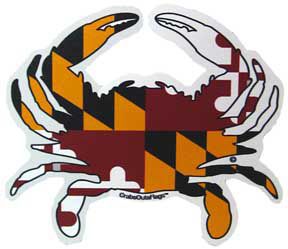 Merchandise featuring the Maryland flag design on the official state crustacean is popular with Eastern Shore natives and tourists alike. 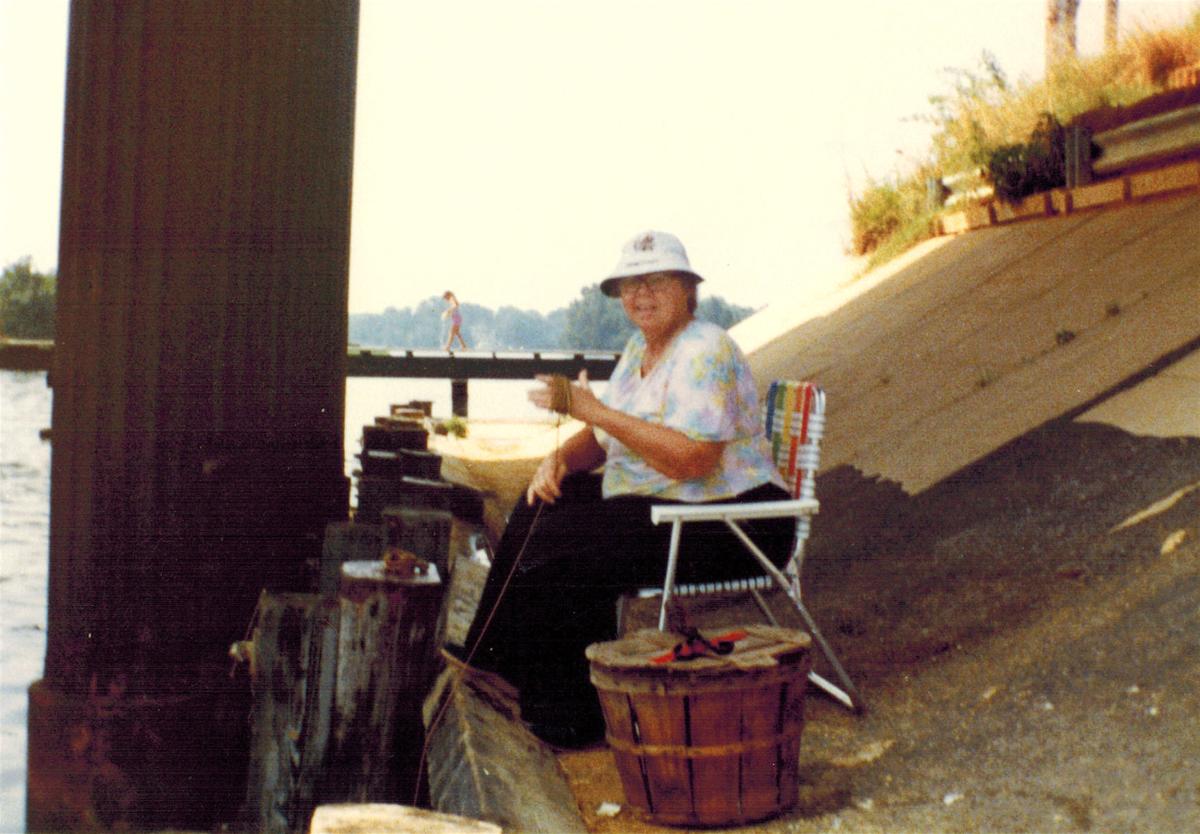 Enjoying the shade under the Newcomb Bridge, the late Margaret Ewing goes “chicken-necking” — catching crabs on a baited line and placing them in her bushel basket. 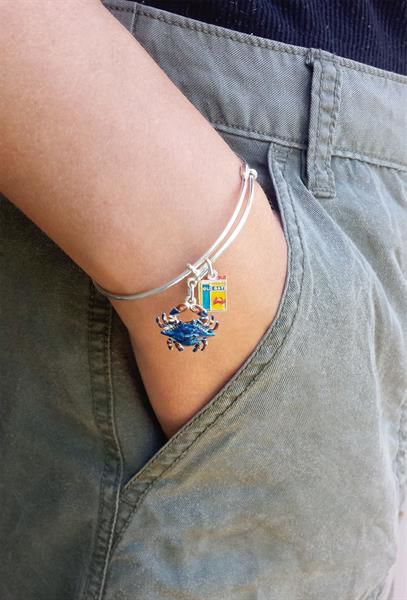 Best-sellers at Silver Linings in St. Michaels are these enameled blue crab and Old Bay can charms.

Salisbury Gift & Garden on Route 50 south of Easton has a “Crab Room,” owing to the popularity of crab-themed gifts, especially with local customers.

This display case at Salisbury Gift & Garden features crab knives, based on the old Carvel Hall design, and pewter mallets, the shop’s most popular gift items.

H. Robins Hollyday took this photo of the Mills-Murphy wedding banquet — and crab feast — in Talbot County, probably in the 1930s or 1940s.

Susan Ewing Higgins of Easton “chicken-necks” in Newcomb in the mid-1980s.

J.B. Walls of Chestertown crabs with a trotline on his boat The Bottom Line on the Chester River years ago.

Merchandise featuring the Maryland flag design on the official state crustacean is popular with Eastern Shore natives and tourists alike.

Enjoying the shade under the Newcomb Bridge, the late Margaret Ewing goes “chicken-necking” — catching crabs on a baited line and placing them in her bushel basket.

Best-sellers at Silver Linings in St. Michaels are these enameled blue crab and Old Bay can charms.

EASTON — It has a face only a mother could love.

It’s not cuddly. It has tough, tenacious claws and sharp points. It’s a sea spider of sorts.

But despite its forbidding form, the blue crab inspires an intense devotion and appetite that brings people together — sitting around a picnic table and spending hours wielding sharp knives and downing cold drinks — and getting to know each other all over again.

It’s been 30 years since the Maryland blue crab became the state crustacean, but the Eastern Shore love affair with them long preceded the official title.

On July 1, 1989, the Maryland General Assembly declared the Maryland blue crab the state crustacean. Only five other states have official crustaceans; Maryland is the only one that claims the blue crab.

The colorful and delicious seafood has functioned as economic fuel for the commercial seafood industry — from the watermen who catch them to the seafood houses that sell them and the restaurants that serve them — as well as entertaining sport for those who have cast their lines and crab pots and dip nets into the Bay and its tributaries. It’s an economic engine, for sure, but it’s driven by a consumer’s intense satisfaction for, say, the moment a succulent lump of steamed backfin hits the taste buds.

In 1896, scientist Mary Jane Rathbun (1860-1943) dubbed them Callinectes sapidus, or “beautiful swimmer that is savory.”

In 1986, Cambridge native and author John Barth described the Maryland blue crab as a “delicious, pugnacious, locally ubiquitous and altogether engaging crustacean” that “swims like a sidewise metaphor.”

Whether steamed as hardshells, fried as softshells or picked and made into cakes, imperial or dip — crabmeat is a delicacy, and a crab feast is, as one Eastern Shoreman puts it, not a meal, but a social event.

For an Eastern Shore crab feast, tables are covered with newspapers several pages thick or with thick butcher paper. A roll of paper towels, sometimes vinegar and melted butter, and always extra Old Bay stand ready. While crabs are satisfying by themselves, other picnic foods show up: saltines, sharp cheese, sliced tomatoes, corn on the cob, salads and ice-cold beverages.

Natives eschew mallets, preferring to display their picking prowess with only a paring knife — everyone has their preferences — but Carvel Hall crab knives are prized possessions, and owners often bring their own.

“I was confused as what to do with the hammer when I first saw one at a restaurant. We always used butter knives. With a hammer you can’t pull meat out,” said one poster on the Facebook page, “You Know You’re from the Eastern Shore When...”

“Eat crabs with a knife ... drive nails with a hammer,” said another Eastern Shore native on Facebook.

“Asked my family to bring three bushels of crabs down for my wedding weekend in Tennessee, and everyone showed up with their own set of Carvel Halls. God bless ’em,” wrote another Facebook poster.

Those numbers are in line with the Chesapeake Bay Foundation’s estimates since the start of the century. “The blue crab is critical to the Chesapeake’s culture and economy,” according to CBF’s website. “Chesapeake Bay watermen supply as much as a third of the nation’s blue crabs each year. And the average commercial harvest in Maryland and Virginia between 2000 and 2009 was more than 55 million pounds each year!”

“The blue crab population is both healthy and thriving, which is great news for the entire Bay,” said Talbot County native and Maryland Department of Natural Resources Secretary Jeannie Haddaway-Riccio. “Under Governor Hogan’s leadership, these results are a clear indication of the effectiveness of our management plan for blue crabs, an iconic species that is essential to Maryland’s economy and the Bay’s ecosystem.”

“Blue crabs are an important part of Maryland’s economy, but they have also become a symbol of our heritage and our way of life on the Chesapeake Bay,” Haddaway-Riccio told The Star Democrat. “The hard-working people that make up the seafood industry, including commercial watermen, take great pride in their work, and they have a personal connection with their local waterways and the species that call those waterways home.”

Our collective love affair is on display seemingly everywhere. The humble creature’s outline is emblazoned on everything — from kitchen towels to elegant jewelry, from candy to knives, and from bumper stickers to plush toys to T-shirts.

“The number one item we sell are crab knives and crab mallets,” said Mona Curry, store manager of Salisbury Gift & Garden near Easton. The store even has a “crab room” with merchandise organized by blue (live) and red (steamed) crabs.

“I think that when you’re proud of where you come from, you need a symbol for it,” said Kelly Real at Silver Linings in St. Michaels. The store’s blue crab and Old Bay can enameled charms, designed by owner Aida Leisure, are “very, very popular,” Real said.

“Crabs are king,” Curry said. “It’s important to our lifestyle on the Eastern Shore.”

That lifestyle includes a constellation of experiences. From catching them to chowing down on them, they evoke fond memories and a set of cultural values and norms. For example, “Carvel Hall” knives (now made by Salisbury Pewter) are a coveted wedding present. Never pick through a pile of steamed crabs to find the fattest — just grab and go. Mallets are for non-natives. Only one lesson is needed; after that, you’re on your own. Pick your crab clean.

“Blue crabs … are small, quick, alert, aggressive — yet endearing all the same in their feistiness, their readiness for unequal combat with their captor,” Barth wrote in the introduction to William W. Warner’s Pulitzer Prize-winning Beautiful Swimmers: Watermen, Crabs and the Chesapeake Bay.

“For me personally, some of the most amazing experiences I have had on the Bay were when I was on the boat with my dad who was a trotliner and a boat builder; and of course, I have many fond memories of family time together eating crabs,” Haddaway-Riccio said.

“I think that crabs evoke those same types of memories for many people, especially here in Maryland— which is one reason our department works so hard and very closely with our stakeholders to manage the fishery so we can ensure healthy and sustainable populations well into the future,” Haddaway-Riccio said.

“My dad (Neavitt native John Higgins) did the old-fashioned way of catching crabs on a line using a rolling pin to roll the line in,” Laura Higgins said. “He would shake his head at us ‘chicken-neckers.’”

While many crabbers put out baited trotlines and crab pots, others like Laura Higgins wade out in shallow water. “My mom and I also did the method of putting the bushel basket in an inner tube and tying it to our waist and dipping up the crabs along the shoreline in Bozman,” Higgins wrote in an email. “My memory of that included the tide rolling out and the grass being full of soft crabs! We caught dozens of them in addition to getting lucky enough to scoop up a plethora of hard crabs. So much fun!”

Its wily nature makes it entertaining quarry. Half the fun is trying to outsmart the lightning-quick, sideways-swimming hard crab who can dart away through eel grass and under a cloud of sand in a half-second.

“Spent many happy summer days chasing hard crabs around Harris Creek with all my cousins,” posted Sharon Burns on Facebook.

“Spending time crabbing with (J.B. Walls) gave me some of my fondest childhood memories,” Erin Legg wrote. “I have never experienced a calm like being on the water before the sun comes up.”

Evoking more than simply a commercial venture — as important as that is — the humble blue crab inspires shared memories, a sense of camaraderie around the table and a kind of cultural mortar that binds a community.

And that’s quite a feat for any creature.