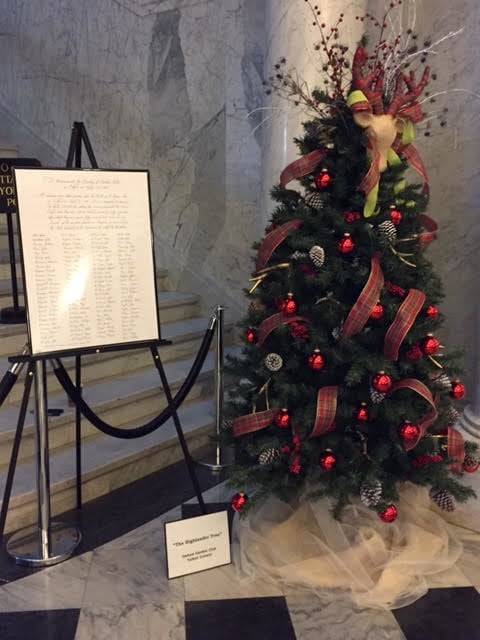 Oxford Garden Club’s Highlander Tree was on display over the holidays at the Maryland State House. 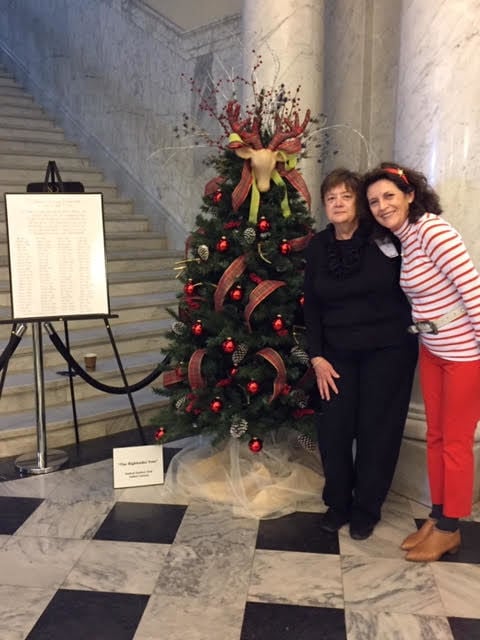 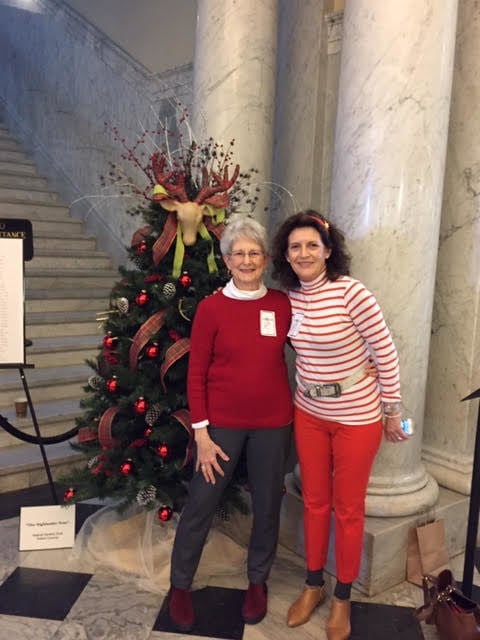 Ginny Wagner and Annie Leconte are pictured with the Highlander Tree in Annapolis.

Oxford Garden Club’s Highlander Tree was on display over the holidays at the Maryland State House.

Ginny Wagner and Annie Leconte are pictured with the Highlander Tree in Annapolis.

OXFORD — Oxford Garden Club represented Talbot County in decorating the Maryland State House Rotunda for the holidays with 23 other garden clubs from all jurisdictions of Maryland on Nov. 30.

This was the fifth year that Gov. Larry Hogan and First Lady Yumi Hogan had hosted this invitational decorating event to deck the halls of the Maryland State House in Annapolis.

Each county or city was requested to have one or more garden clubs collaborate to create a six-foot, unlit, adorned Christmas tree with a theme that related to the county or city’s legacy or history.

This year, Oxford Garden Club created a special historic Highlander themed Christmas Tree that related to Scotland and the Battle of Culloden on April 16, 1746. The “Highlander Tree” recounts the last battle of the “Forty-five” Rebellion of Jacobites under Charles Edward, the “Bonnie Prince Charlie” when they were defeated by the British forces under William Augustus, Duke of Cumberland. This battle marked the beginning of the end of all Scottish Clan way of life. Many Scottish prisoners were taken by the English and some were loaded onto the sailing vessel, Johnson, where prisoners were taken to be sold into servitude in America for a five-year term after they landed in Oxford, Maryland on July 20, 1747. An enlarged page of the Johnson vessel log was displayed in a glassed frame near the Highlander Tree that listed the first and last names of each Scot prisoner. This historic information came with compliments from the St. Andrew’s Society.

If you are an Outlander TV series fan based on Diana Gabaldon’s Book Series, you might have an impulse to scan for the name James or Claire Frasier. Alas, their names are not on the beautifully penned list displayed of 101 people, consisting of 10 women and 91 men, many whose family names continue to reside in Talbot County to this day. It is said that after their five years of servitude, each was given 50 acres of land, tools and corn.Oxford Garden Club Christmas tree decorators Patricia Jessup, Ginny Wagner, Annie Leconte, Marie Davis and Dorothy Williams chose to commemorate this history of Oxford with “The Highlander Tree” and festooned it with a traditional plaid ribbon as a reference to the tartans of the various clans. The tree topper was a stag’s head which the represents Red Deer subspecies, Cervus elaphus scoticus.

Red Deer have existed in Scotland for some 40,000 years and were considered a spiritual, vigorous and strong animal spirit, often the featured artwork subject of ancient Scots. The tree was also decorated with gilded stag antlers and other natural elements, including dried Eryngium plenum (Sea Holly) a purple flowering plant which was used to represent thistle, the national flower of Scotland.

Each Christmas Tree Decorating Team had the opportunity to visit with Mrs. Hogan and Lt. Gov. Boyd Rutherford and received a special certificate for their participation for decking the halls of the oldest State House in America.

Oxford Garden Club is a member of District I of the Federated Garden Clubs of Maryland, Inc. and National Garden Clubs, Inc. The mission of the club is to promote the knowledge of gardening and floral design, to participate in civic projects in order to conserve and beautify the community and to actively support all forms of conservation.

For more information about the Oxford Garden Club, visit www.oxfordmdgc.org or email oxfordmdgc@gmail.com.