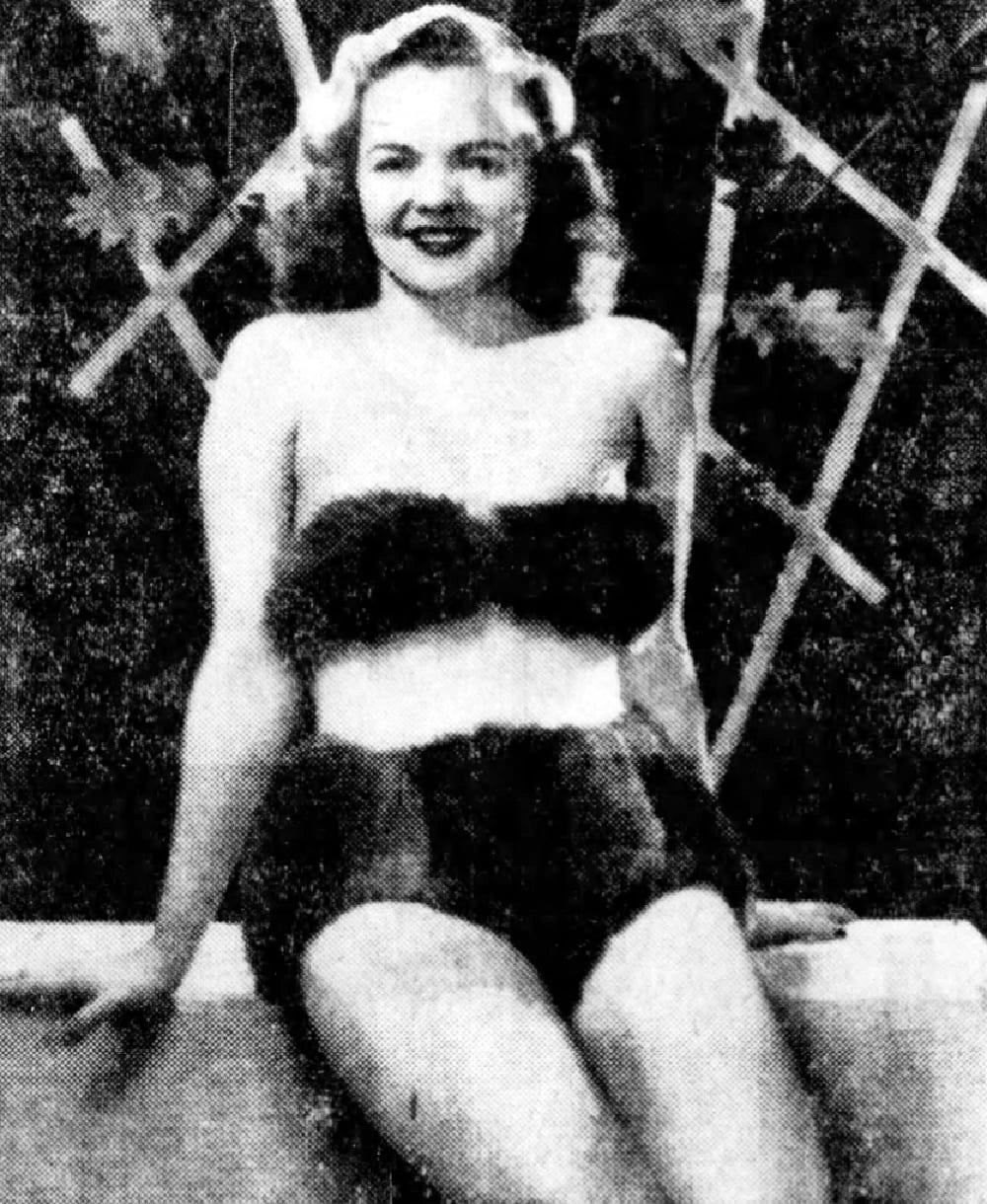 Doris Todd of Preston, circa 1948, poses in a bikini of muskrat fur for a fashion show at the Outdoor Show in Cambridge. 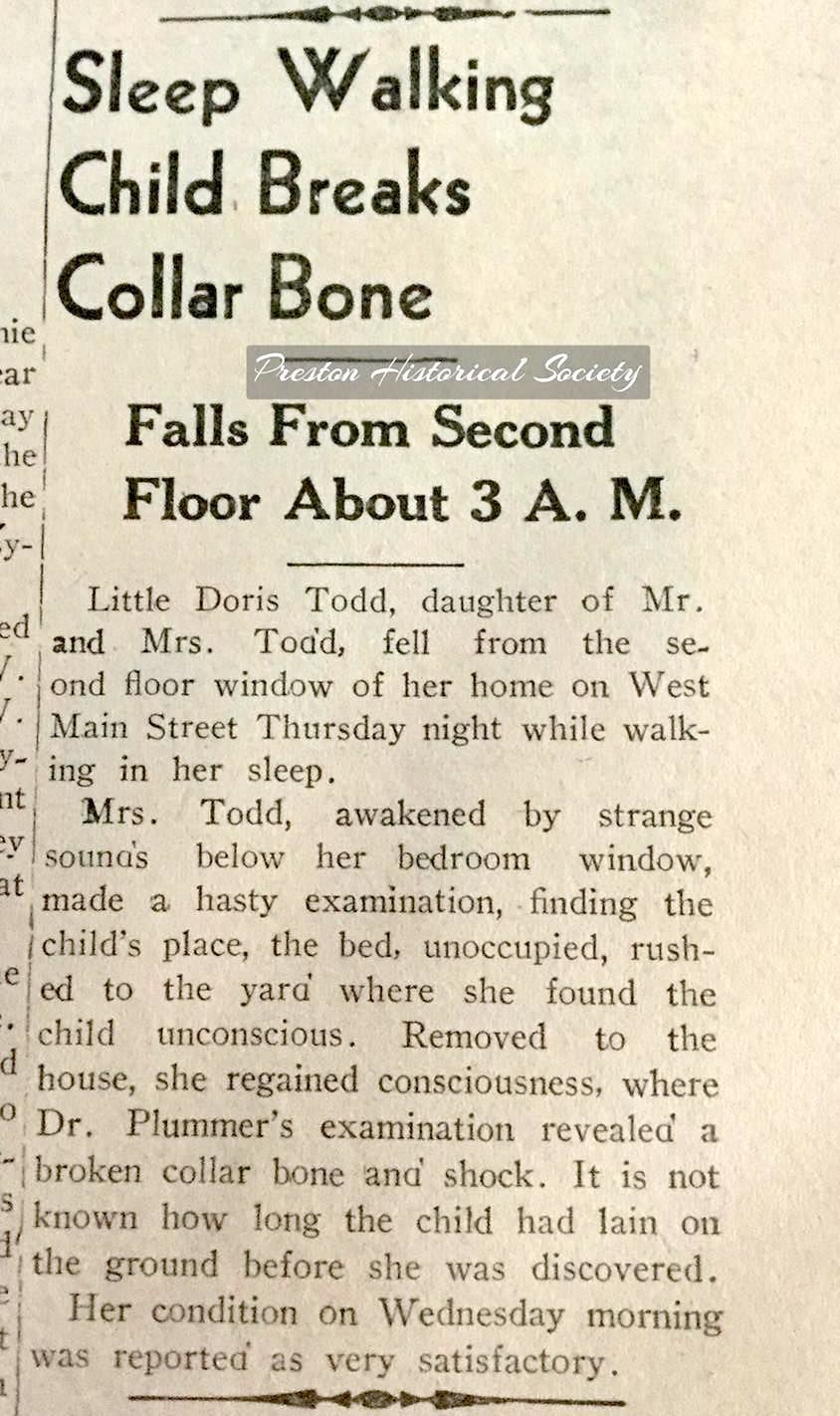 An article from the Preston News & Farmer recounts a young Doris Todd’s fall from a second-story window.

Doris Todd of Preston, circa 1948, poses in a bikini of muskrat fur for a fashion show at the Outdoor Show in Cambridge.

An article from the Preston News & Farmer recounts a young Doris Todd’s fall from a second-story window.

PRESTON — Earlier this month, the Preston Historical Society posted an image of a newspaper story from a 1938 edition of the Preston (Md.) News & Farmer. Here is the headline: “Sleep Walking Child ... Falls from Second Floor About 3 A.M.” And here is the gist of the story: “Little Doris Todd, daughter of Mr. and Mrs. Todd, fell from the second-floor window of her home on West Main Street (in Preston) Thursday night while walking in her sleep.

“Mrs. Todd, awakened by strange sounds below her bedroom window, made a hasty examination (and) finding the child’s ... bed unoccupied, rushed to the yard where she found the child unconscious. Removed to the house, (the child) regained consciousness. Dr. Plummer’s examination revealed a broken collar bone and shock. It is not known how long the child had lain on the ground before she was discovered.”

If you are like me, your mind has found its way to this question by now: I wonder what ever became of the sleepwalking girl?

• Doris Todd graduated from Preston High School in 1946. By that time, she had grown into a gorgeous young woman. She set out to become a model, attending schools in New York and Miami.

• She had some success. Nine years after her drowsy plunge from the window, Doris was chosen as the “1947 National Swim for Health Week Girl.” While in New York for ceremonies opening the annual fitness campaign, she posed in a bathing suit on the terrace outside her hotel room in a photo circulated widely by wire services. (I found it in a Hagerstown newspaper.)

• In 1948, the Baltimore Sun ran an unforgettable photo of Doris. She is wearing a bikini made of muskrat skin, which she was set to model that week in a fashion show at the famous Outdoor Show in Cambridge. This is where the World Championship of Muskrat Skinning is decided every year.

• Quote from that Sun article: “The Eastern Shore is proud of its muskrat skin production and plans to make certain the industry won’t go unnoticed.” Doris Todd did her part!

• Later that same year, she returned to Preston from her new home in New York City to attend a family dinner with her siblings and their spouses and children. Reporting on that visit, the Denton Journal described Doris as a “Powers Model.”

• That phrase is a big deal. In the 1920s John Robert Powers had founded in New York City what is believed to be the first modeling agency in the world. “Powers Girls” were national celebrities. In 1943, Hollywood made a musical called “The Powers Girl” that featured music by Benny Goodman and Peggy Lee. In the words of a Life magazine article from those days, “Powers ... is to modeling what Cartier is to diamonds.”

• Doris Todd does not seem to have been one of the “Powers Girls” who modeled their way to fame and celebrity. It looks more like — hey, she did alright for herself, getting gigs at that trade-association and national-fitness-week sort of level.

• Doris was still at it in the 1950s. She is described as a New York City model in an Easton Star-Democrat report from 1950 noting that she had spent time with friends in California and traveled to Honolulu in the then-territory of Hawaii.

• The Denton Journal reported that the Hawaii excursion was a work trip. Doris spent it modeling the latest from Henry Rosenfeld Clothes. This was fitting for a New York City gal who hailed from little ol’ Preston. A onetime shipping clerk in New York’s garment district, Rosenfeld had climbed the ranks of the ladies-fashion game by focusing on creating dresses that looked elegant while still being affordable to everyday women from middle- and working-class families.

• The trail of old newspaper clippings ran cold for me at this point. I wasn’t able to find snippets from the lives of Mr. and Mrs. Scottland. I don’t know where Mr. Scottland was from or what he did for work. I don’t know how long Doris kept modeling.

• The couple apparently lived in Virginia for a while. They moved to Florida in the mid-1970s. They had three children — Lisa, Tina and Todd.

• Doris died in 1985, just 55 years old. At the time of her death, she lived in Cape Canaveral, Florida. The one-paragraph obituary for her in the Orlando Sentinel describes her only as “a nurse’s aide and a Presbyterian.” The Easton Star-Democrat back home on the Eastern Shore of Maryland did much better, mentioning Preston High School, the modeling career, and that trip to Honolulu back at the height of Doris Todd’s glory days.

Jim Duffy lives in Cambridge and is the founder of the Facebook page, Secrets of the Eastern Shore and the author of the three books, two of which best fall under the category, “Eastern Shore Road Trips.” Find him at www.secretsoftheeasternshore.com.