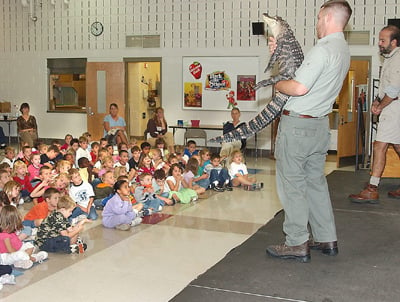 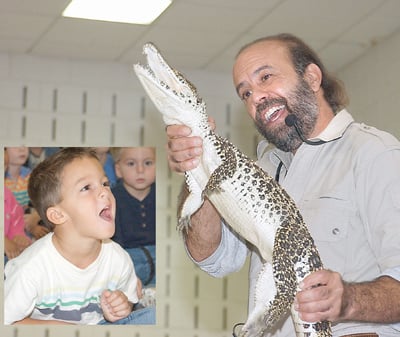 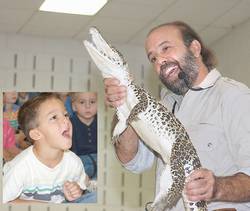 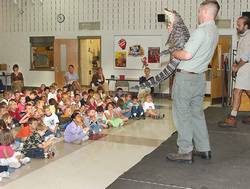 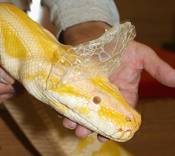 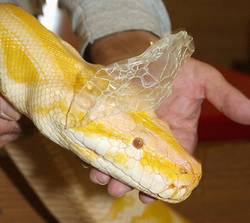 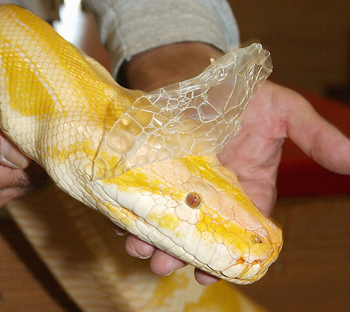 CORDOVA — Reptiles may never be cute and cuddly, but the students of Chapel District Elementary School didn’t mind.

On Wednesday, Michael Shwedick presented his Reptile World to them in two assemblies sponsored by the Chapel District PTO.

But the star of the show was Banana Boy’s Brother, a 12-foot-long Indian rock python. Shwedick invited the students on stage to touch the snake, which feels more like vinyl than a live animal.

“There is no such thing as a slimy snake,” Shwedick said. “Fish have slime. Snakes have shine.”

Banana Boy’s Brother had just begun to shed its skin.

Holding up a large, previously shed skin, Shwedick said, “Boys and girls, you should never find skin like this in your yards. If you do, you should call me.”

Shwedick originally shared Banana Girl in his assemblies. After retiring her, he turned to her younger sister, Banana Peel. Then he moved on to her brother, Banana Boy, before sharing the 4-year-old Banana Boy’s Brother.

“I am running out of names,” he said.

Banana Boy’s Brother will grow another four to six feet and will weigh nearly 250 pounds when fully grown, Shwedick said.

Shwedick, who is based near Annapolis, has been sharing his reptiles with audiences since 1970. He captivated the students during his 90-minute presentation, drawing applause when he produced the alligator and the snakes.

Shwedick shared facts about each reptile, stressing that they are not naturally mean creatures. Talking about Alexander the turtle, he said, “He is more afraid of us than we could ever be afraid of him.”

Reptiles see things bigger than them as threats and things smaller than them as food, he said. “If we leave reptiles alone, they will really leave us alone.”