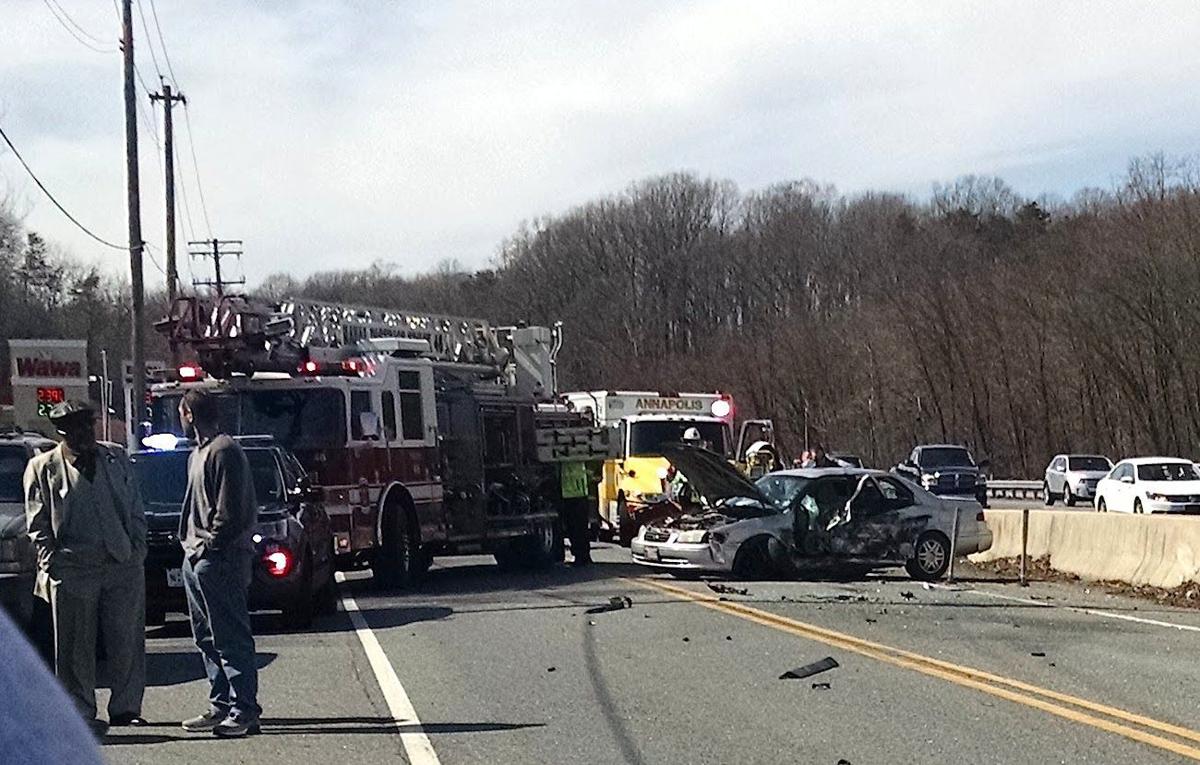 Three vehicles were involved in a fatal crash on Buschs Frontage Road in Annapolis on Sunday afternoon, March 11, 2018. 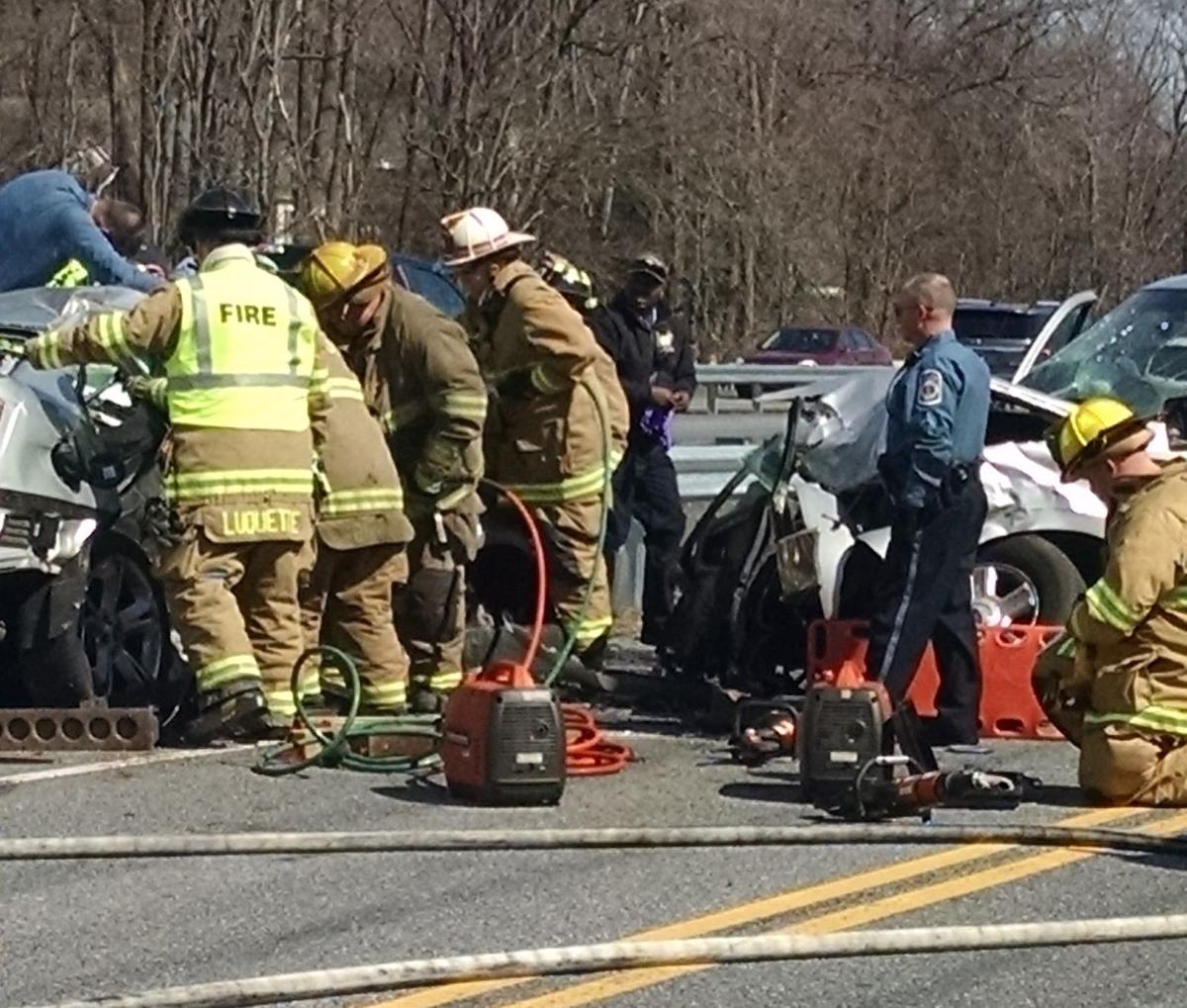 Firefighters work to remove the top of Ford Taurus involved in a fatal crash Sunday afternoon on Buschs Frontage Road. 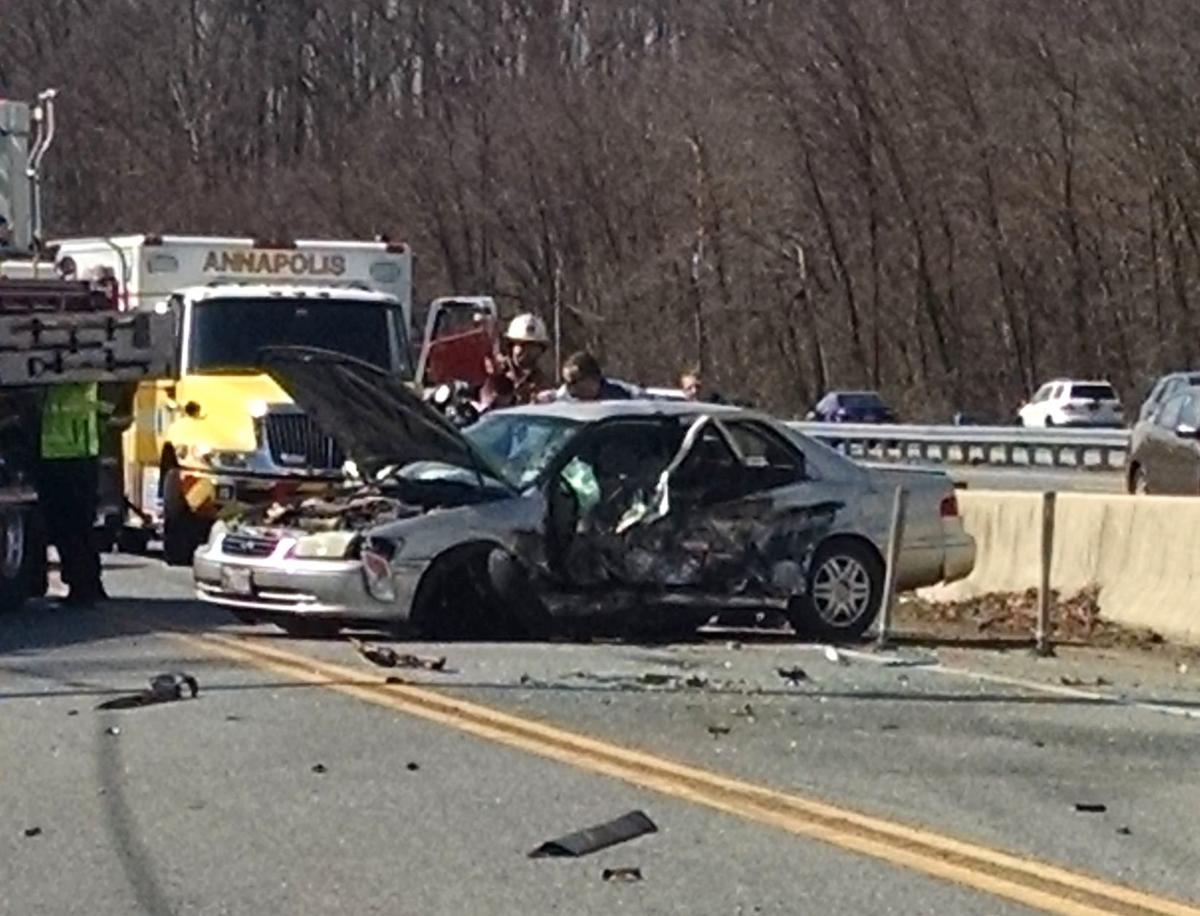 Debris is scattered all along Buschs Frontage Road. 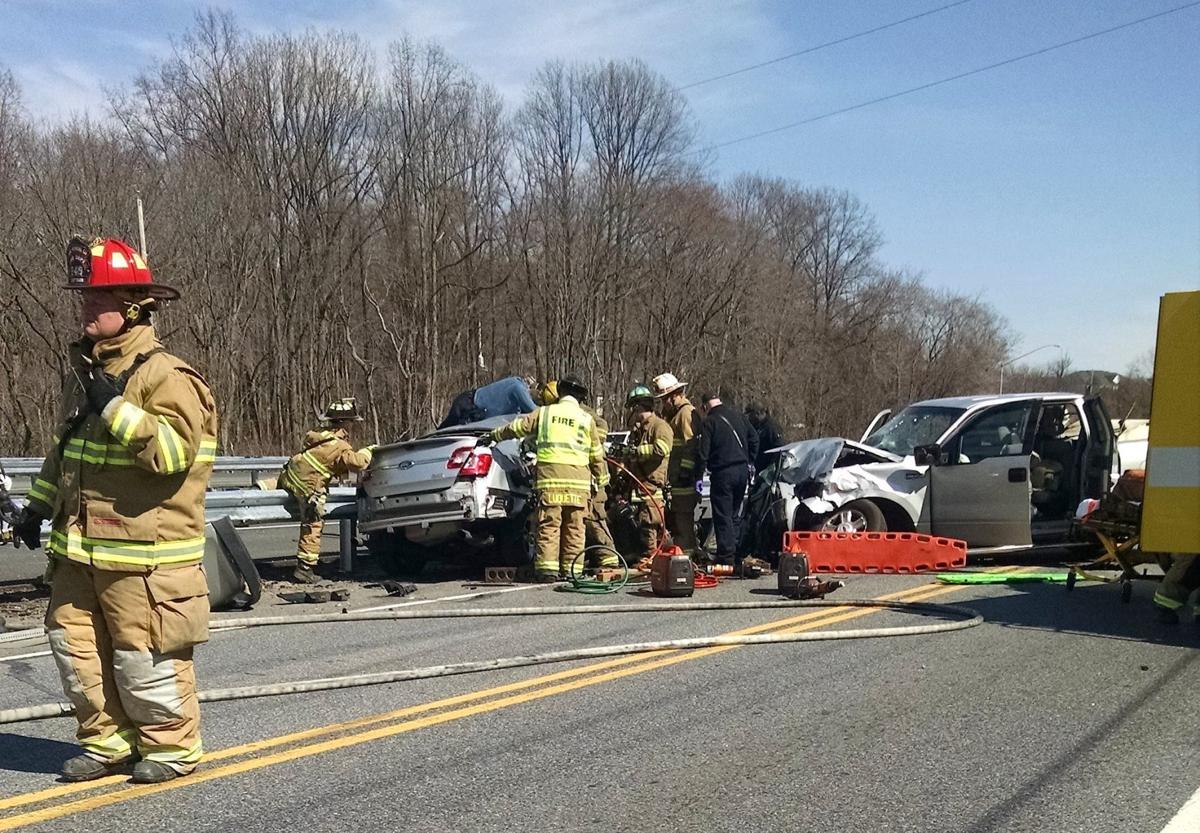 Firefighters work to free the driver of a Ford Taurus involved in a fatal crash on Buschs Frontage Road Sunday afternoon, March 11, 2018. 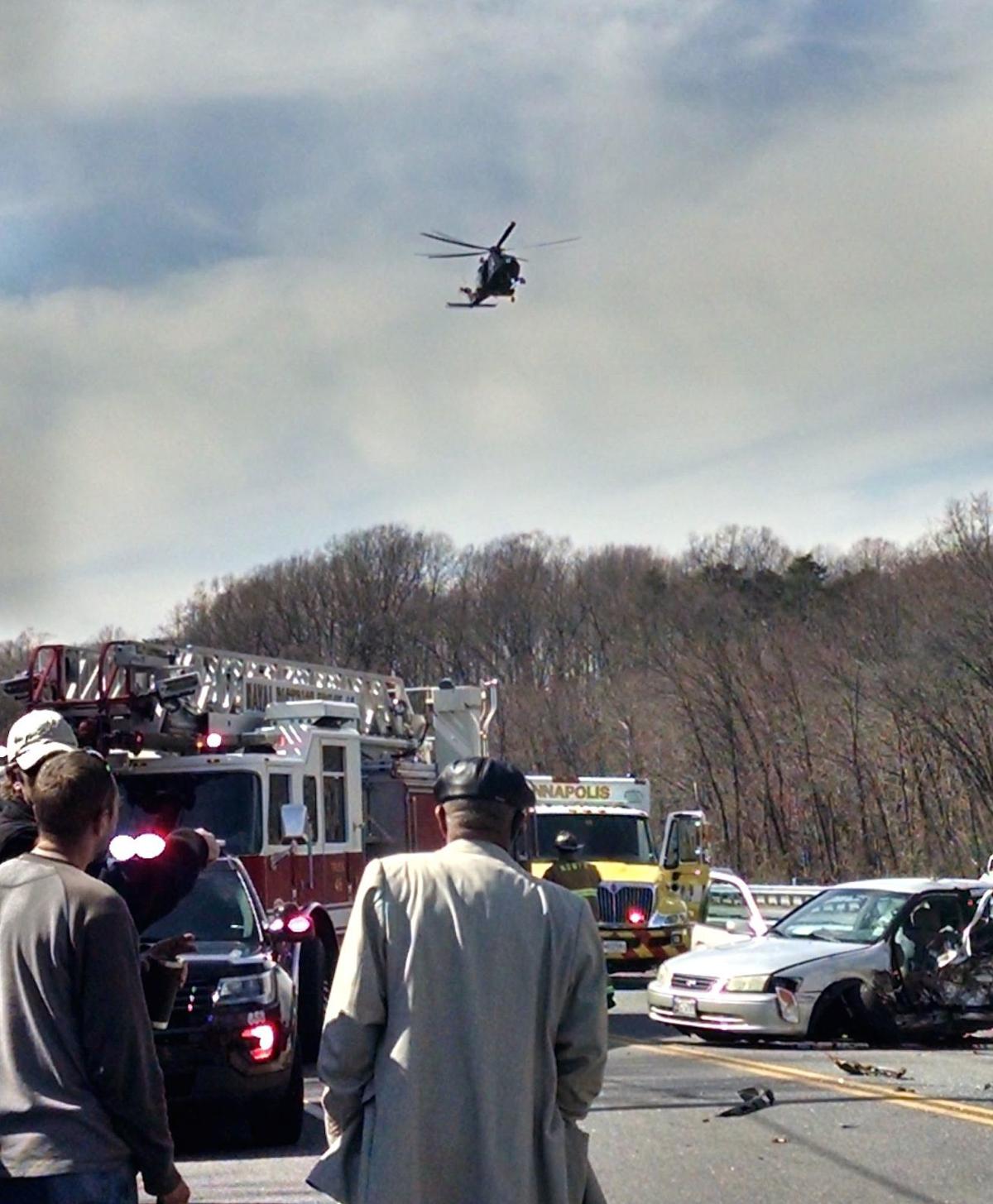 Three vehicles were involved in a fatal crash on Buschs Frontage Road in Annapolis on Sunday afternoon, March 11, 2018.

Firefighters work to remove the top of Ford Taurus involved in a fatal crash Sunday afternoon on Buschs Frontage Road.

Debris is scattered all along Buschs Frontage Road.

Firefighters work to free the driver of a Ford Taurus involved in a fatal crash on Buschs Frontage Road Sunday afternoon, March 11, 2018.

ANNAPOLIS — Excessive speed and heroin were to blame in the March 2018 crash on Buschs Frontage Road in Annapolis that claimed a grandmother’s life, police said, and on Aug. 29, the Queenstown man who was behind the wheel pleaded guilty to negligent manslaughter by automobile.

Christopher M. Dillehunt, 29, had sought a jury trial in the case, and jurors had been selected in Anne Arudel County Circuit Court Thursday when he decided to take the plea deal.

Laurel D. Zeiler, 81, and her daughter Cynthia L. Whittington, both of Arnold, were on their way to Wawa March 11, 2018, when Dillehunt’s 2012 Ford Taurus crossed the centerline and sideswiped the 2000 Toyota Camry driven by Zeiler, according to the Anne Arundel County Police Department. The Taurus then spun and was T-boned by a 2004 Ford F-150 truck driven by Kathi J. Ridgely of Lothian.

Police said Dillehunt was traveling at least 70 mph in a 40 mph zone.

Horrific is the word Tammy Darrow of Greensboro used to describe the crash. Darrow, who is with Hill Hounds Animal Rescue and Celebrating Pugs, was at the Wawa waiting to meet a rescue transport from Louisiana.

She and another animal rescue volunteer immediately ran to render aid before police and emergency medical responders reached the scene.

Darrow ran to the Taurus, and her friend to the Camry. The truck didn’t look as badly damaged as the cars, although the front of it was on the ground — the wheels had been knocked sideways, she said.

The Taurus’ passenger side door was gone, and the driver’s side was pinned up against the guardrail. The passenger was awake and in pain, and Darrow couldn’t get past her to the driver to see if he was breathing, she said.

“The car was sort of smoking. You could smell the gas,” she said.

Debris was strewn from in front of the Wawa to the Volvo dealership and took out signs along the way, Darrow said.

“It was an overwhelming scene. I’ve never seen anything that bad,” she added.

Darrow credits the first police officer on the scene with saving Dillehunt’s life. She said the officer climbed up over the trunk of the car and reached through the sunroof to hold Dillehunt’s head up and help him breathe.

Dillehunt kept nodding out, and the officer asked if they were on anything. The passenger told him they were both on heroin, Darrow said.

Police later said their investigation found Dillehunt and his passenger, Tammy Lawson of Queenstown, had traveled to the western shore to get heroin and, after using what they purchased, were on their way back to the Bay Bridge.

It took three doses of naloxone for emergency responders to revive Dillehunt, police reported. Firefighters had to cut the top of the car off to get Dillehunt out.

Whittington, Ridgely and Ridgely’s passenger, Aaron J. Catterton of Lothian, all were treated at Anne Arundel Medical Center in Annapolis for their injuries.

Dillehunt was convicted in 2009 of possession with intent to distribute oxycodone. He received a 20 years sentence with all but one year suspended, followed by five years supervised probation. His probation was extended following violations, and he was on probation at the time of the crash, according to court records.

Sentencing for Dillehunt in the crash case is set for Dec. 4 in Anne Arundel Circuit Court with Judge Robert J. Thompson.

Lawson was charged with involuntary manslaughter, distribution of narcotics and reckless endangerment in connection with an overdose death in Talbot County in May 2017. She was released on her own recognizance. That case was pending at the time of the crash.

She pleaded guilty to distribution of narcotics, and the other charges were dropped. She was sentenced July 31, 2018, to three years in prison with six months to serve and the rest suspended.

Lawson was not charged in the crash.