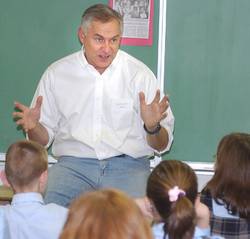 BARB STORYPHOTO BY ROXANE DOSTER WATTSMarch of the Penguins producer/director Greg Marshall answered questions on Wednesday from 5th grade students at Saints Peter and Paul about his adventures with filming animals in the wild. 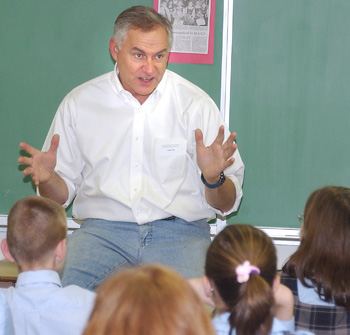 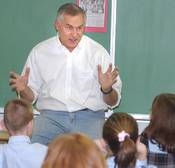 BARB STORYPHOTO BY ROXANE DOSTER WATTSMarch of the Penguins producer/director Greg Marshall answered questions on Wednesday from 5th grade students at Saints Peter and Paul about his adventures with filming animals in the wild.

EASTON — “Prepare to be lucky.” That’s the advice adventurer, scientist, filmmaker and inventor Greg Marshall gave to a class of fifth-graders at Sts. Peter and Paul Elementary School Wednesday morning.

Marshall’s “Crittercam,” a video and audio system he developed, was attached to Emperor penguins in the underwater scenes in last year’s hugely popular nature documentary, March of the Penguins.

An executive producer and director of remote imaging for National Geographic, Marshall visited the class prior to a lecture at the University of Maryland’s Horn Point Lab in Cambridge. The school visit was arranged by Dr. Judy O’Neil-Dennison, a marine biologist at Horn Point who attended graduate school with Marshall and who is the mother of a student in the class, Elizabeth Dennison.

“What I wanted to do was be a marine biologist,” Marshall told the enthusiastic 5-1 and 5-2 class of budding scientists of his dream to work with animals from the time he was 10 and 11 years old, snorkeling with his brother to see who could stay underwater the longest.

But after studying at Georgetown University with a major in international relations and a minor in biology, Marshal said he wasn’t sure what his career path would be. He considered law school, but thought, “What was my dream when I was 10 and 11 years old?” He returned to graduate school at State University of New York at Stony Brook, worked hard and the dream of a life began to unfold with a lot of persistence, sense of purpose and excitement.

He told the students he came up with his “Crittercam” idea during a dive off the coast of Belize. (That trip was in 1986, according to the National Geographic “Crittercam Chronicles” Web site.) As a shark approached, Marshall saw a remora (a sucker fish) clinging to it and the proverbial light bulb came on. As the shark disappeared into the murky water, Marshall said he thought about how the remora rides along with the shark and how a camera attached like a remora would help scientists learn about the sharks’ behavior and habits.

“The idea was born,” Marshall said. “I was lucky the shark came by and lucky to see the remora. I was lucky I was prepared and lucky I had this idea.”

As a struggling grad student, Marshall was able to obtain small research grants from the American Museum of Natural History and SUNY to buy one of the first hand-held video cameras to fit into fiberglass housing. Examples of that early prototype can be see on the Web site. It was strapped onto a captive loggerhead turtle and “Crittercam” was born.

The next challenge was to see how it would work with creatures in the wild. Again, funding and convincing scientists of its potential were crucial. Marshall was able to convince the David El Luginbuhl Foundation — which is dedicated to the study and conservation of the endangered leatherback sea turtle — to back “Crittercam”’s development. According to the Web site, the first field-worthy model was deployed on a nesting leatherback in St. Croix in 1989. The camera worked well enough as the turtle crashed through surf and dark deeps, but the effort failed when the turtle returned without the camera seven days later.

Since that time, “Crittercam” has been deployed on whales, sharks, seals, turtles and penguins and other species and has helped Marshall and other scientists to learn about these animals in new ways. In 2003, Marshall and his team were able to place one of the cameras on lions in Kenya.

“We can work with all these animals we know so little about,” he told the students. “We’re able to see what we imagine.”

Marshall obviously was proud of the recovery rate of his device, explaining to the group that of 450 animals in which it was used, 440 cameras were recovered. Some of the students asked if any of any of the cameras had been eaten. Marshall said he couldn’t be sure, but added that scientists are working on developing a “gut” camera to find out what animals are eating. He challenged the students to become the next generation of scientists to develop technology to increase knowledge about land and sea animals.

For additional information about “Crittercam” or Greg Marshall see: