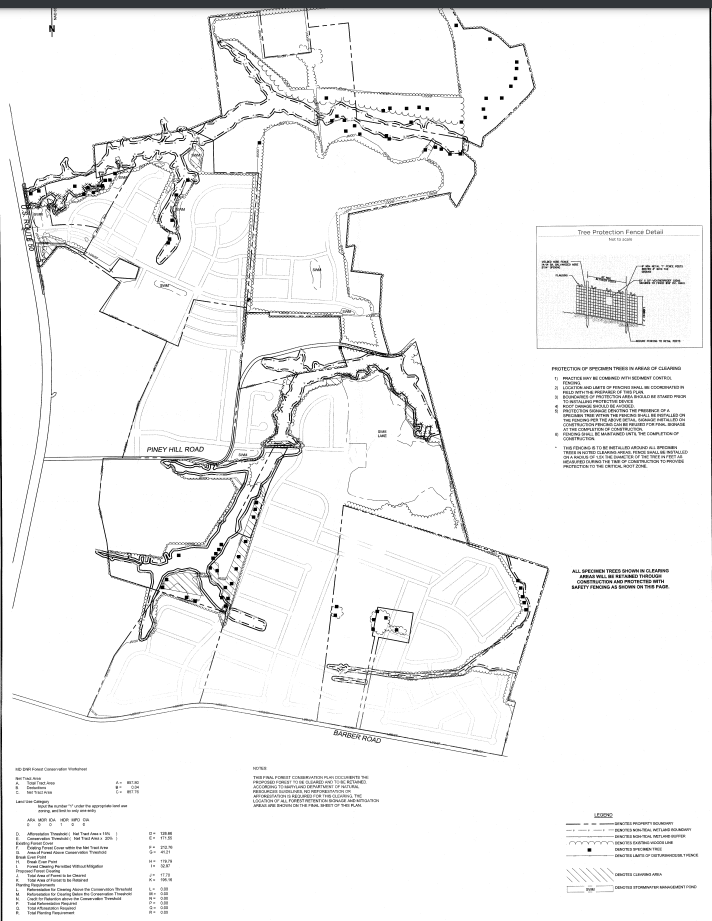 An outline of the forestland shows the cut close to Piney Hill Road. It’s marked by dashed lines.

Forestland can be seen behind an advertisement sign for Lakeside at Trappe off U.S. Route 50. 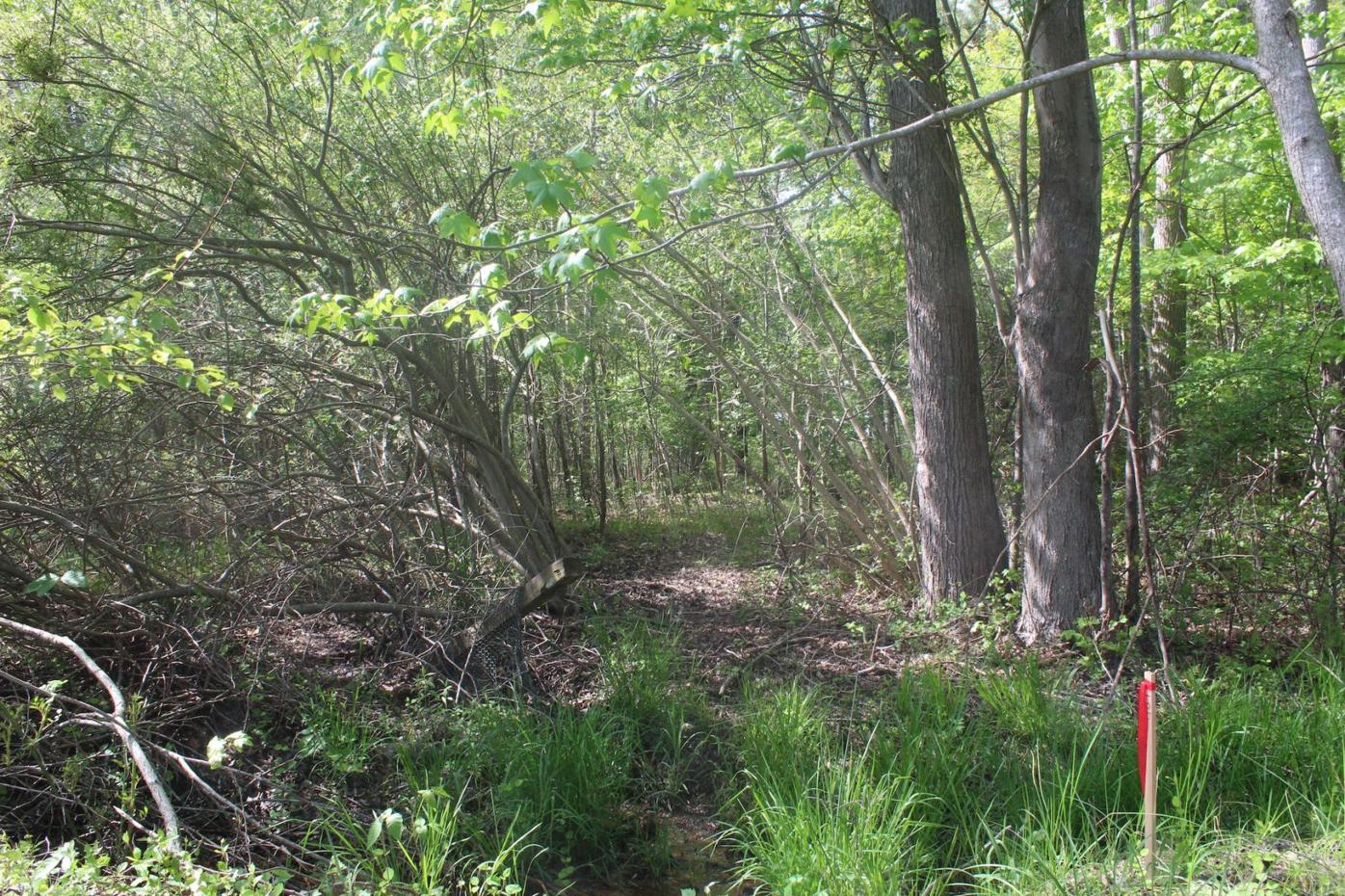 A post marker inside forestland owned by the developers of Lakeside at Trappe. The developers will cut 17.7 acres of forest for the 2,501 housing-unit development. 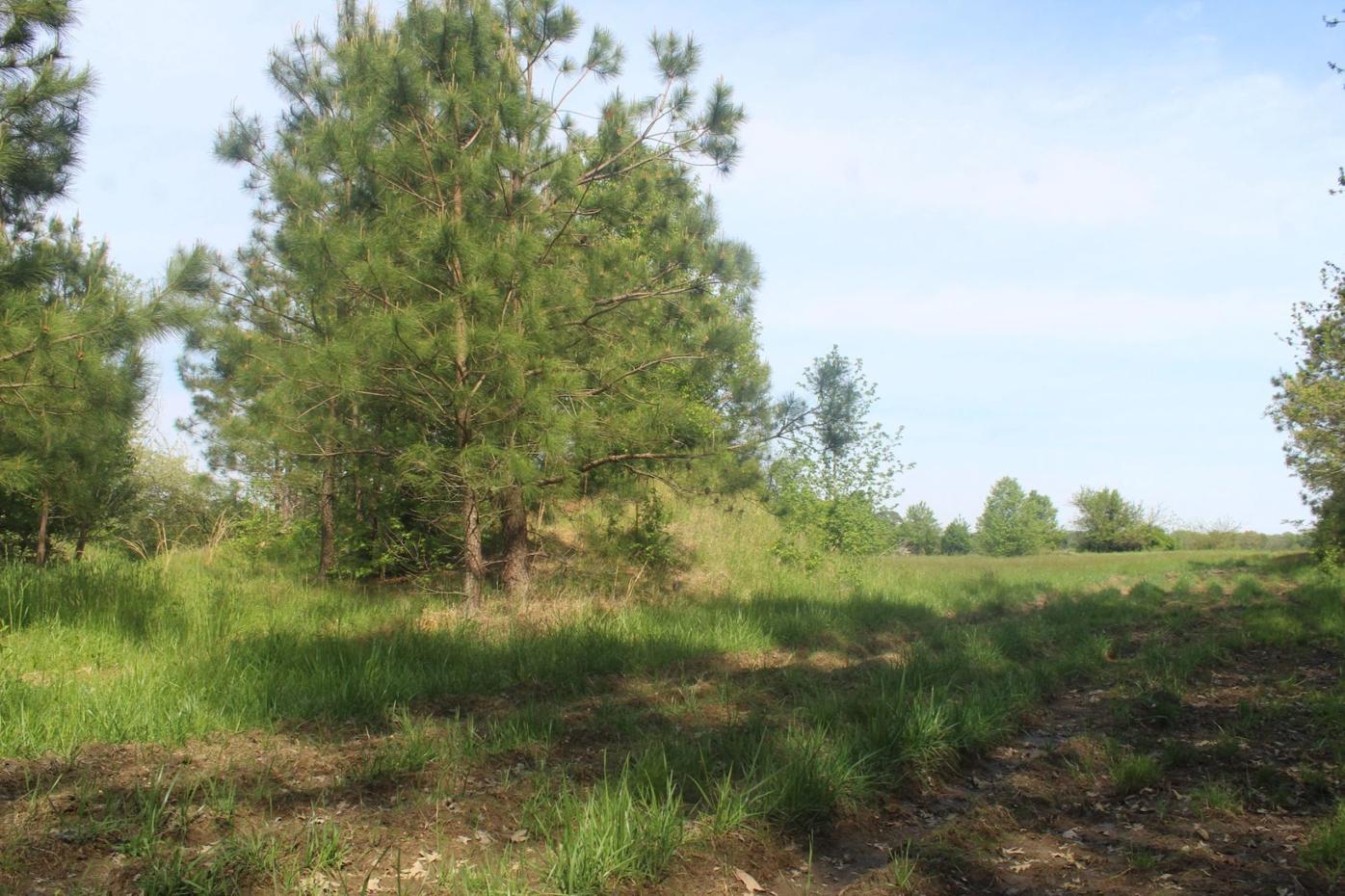 Rauch Engineering, the developers of Lakeside at Trappe, need to cut more than 17 acres of forestland for roads and utility accessways for the development.

An outline of the forestland shows the cut close to Piney Hill Road. It’s marked by dashed lines.

Forestland can be seen behind an advertisement sign for Lakeside at Trappe off U.S. Route 50.

A post marker inside forestland owned by the developers of Lakeside at Trappe. The developers will cut 17.7 acres of forest for the 2,501 housing-unit development.

Rauch Engineering, the developers of Lakeside at Trappe, need to cut more than 17 acres of forestland for roads and utility accessways for the development.

TRAPPE — The developers of Lakeside at Trappe are seeking a state permit to cut 17.7 acres of forestland on their property off U.S. Route 50, a deforestation proposal requested by Rauch Engineering as it prepares to construct its 2,501 housing-unit development.

Rauch Engineering owns more than 850 acres of property off Route 50 between Barber Road and Backtown Road through formal property owners Trappe East Holdings Business Trust. About 212 acres of the entire property is forestland, and exactly 17.7 acres of that forestland will need to be cut down for the development’s roads and utility crossings through wetlands and waterways.

More than 100 acres of the forestland is within a conservation easement and won’t be touched.

But the deforestation is in a forest interior bird dwelling, would impact a species under protection status, the Delmarva fox squirrel, and the cut is technically within the Miles Creek watershed, according to a March 4 public notice in The Star Democrat posted by the Maryland Department of Natural Resources. The notice says that DNR is reviewing a “forest conservation program approval” application from Rauch Engineering.

A DNR spokesperson, Gregg Bortz, said the department did not find any critical areas, or waterways that flow into the Chesapeake Bay, in its review. The state has found the application to be “complete,” he said — but a hearing will be held in Caroline County next week.

“A hearing (is) scheduled to take place Monday, May 3, from 6 p.m. to 8 p.m. at Martinak State Park Nature Center Pavilion,” Bortz said in an email. “No decision would be made on the application until after all public comments are accepted and reviewed.”

The materials for the application reveal the cut is close to Piney Hill Road and that streams connected to Miles Creek, as well as non-tidal wetlands in the area, would have to be buffered during the land conversion.

Rob Etgen, the president of Eastern Shore Land Conservancy, cautioned the developers to buffer the streams to minimize the impact to waterways.

“Protection of forests along stream corridors is essential to sustaining much of the wildlife we know and love on the Eastern Shore,” he said in a statement. “While the Lakeside forest plan appears to balance some cutting with added protections to the stream corridors, we encourage that these streamside buffers be as wide as possible and put into permanent conservation easements held by a qualified land trust like Eastern Shore Land Conservancy.”

Bortz from DNR said that “protection of aquatic and land resources is a high priority for the state” and adequate protection of streams would be further reviewed by Maryland Department of the Environment.

The more than 200 acres of forestland includes two stands. The first 100-acre stand hosts 156 trees per acre and is about 77 years old. Species include Northern Red Oak, Loblolly Pine and Sweetgum, among other common trees on The Shore.

The second stand has 375 trees per acre and is estimated to be 43 years old. It includes less common species such as Mockernut Hickory and Pignut Hickory.

An analysis from DNR Environmental Review Coordinator Lori Byrne found that the Delmarva fox squirrel is common throughout the entire 212-acre forestland and the species, which is need of protection, would be threatened by the cut.

“The Wildlife and Heritage Service has determined that the Delmarva fox squirrel, a species with In Need of Conservation status in Maryland, is known to occur on or in the immediate vicinity of the project site,” she wrote in a letter to the developers. “If the proposed activities do not occur within the forested areas on the property, then Delmarva fox squirrel habitat will not be impacted.”

Rauch Engineering responded to the findings through a 2019 forest inventory report, which is part of its overall application. Developers said “no tree clearing should occur during the Delmarva fox squirrel breeding season” but did not otherwise say how else the species would be protected.

Byrne also found the forestland is home to important bird habitats, such as songbirds, warblers, hawks and owls, which live deep in the forests and depend on these tracts for habitat and breeding. Many of them are common but have been declining in the past 30 or 40 years and the state has moved to protect the habitats.

“Our remote analysis suggests that the forested area on this property contains Forest Interior Dwelling Bird (FID) habitat,” she wrote. “Populations of many bird species which depend on this type of forested habitat are declining in Maryland and throughout the eastern United States.”

Rauch Engineering countered that “the determination of of FID habitat does not consider political boundaries, and may include off-site woodlands that reach” into other landowner’s property, which it has no control over. The developers reiterated that only 17 acres would be cut and is necessary for the development.

“Specific proposed road crossings are essential to gain access to developable land and have gone through the scrutiny of best avoiding and minimizing both forest and wetlands/waters impact,” they wrote.

Developers acquired the property off 4313 Ocean Gateway about 18 years ago, preparing for Lakeside at Trappe. They ran into the housing crisis and plans stalled, but Rauch Engineering has now won approval from town and county officials and are moving forward with the development.

The forestland has been documented for the development both in 2004 and 2013, prior to Rauch Engineering submitting its forest inventory report in 2019 and recently moving ahead with the application process.

If Rauch Engineering secures a permit from DNR, it would have the go-ahead to make a cut. A Talbot County official with the planning and zoning department said the approving authority is the town of Trappe.

Town Attorney Lyndsey Ryan said Trappe “does not have a forest conservation program” so DNR would review and approve the cut on behalf of the town.

Joan Maloof, the executive director of Old Growth Forest Network in Easton, is not familiar with the forest stand in Trappe but has expressed dissatisfaction with state laws allowing property owners to cut forestland, especially when stands are considered old growth, or more than 120 years old.

“Governments do not save forests,” she wrote in a statement. “People do.”

So the second stand-the 43 year old one-is what used to be the drive in movie?