Crowds of homeowners off Dutchmans Lane showed up to an Easton Planning Commission meeting on July 15 to protest the planned development near the Elks Lodge. 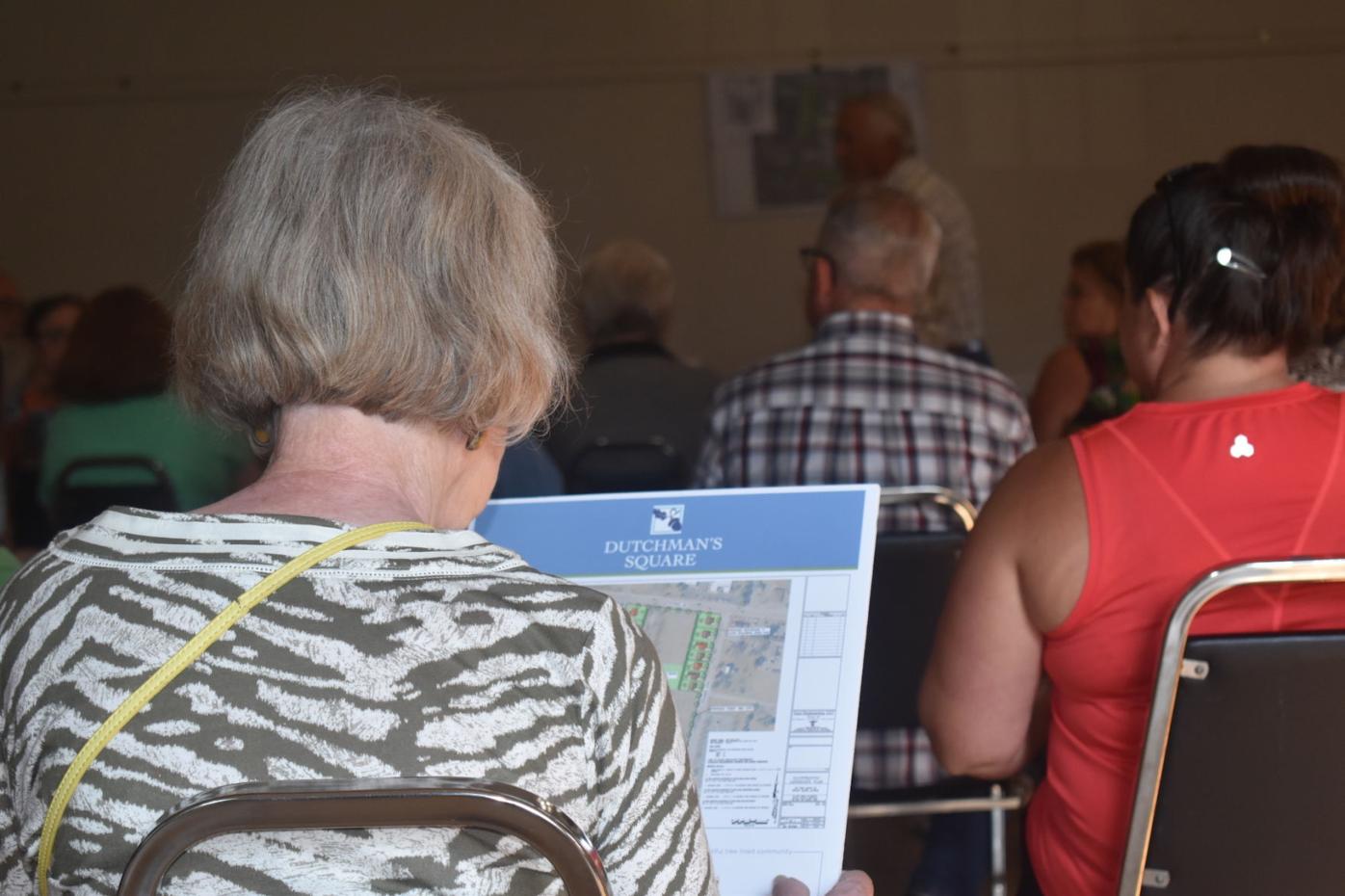 A homeowner looks at the design plan for the new development from Paquin Design/Build. 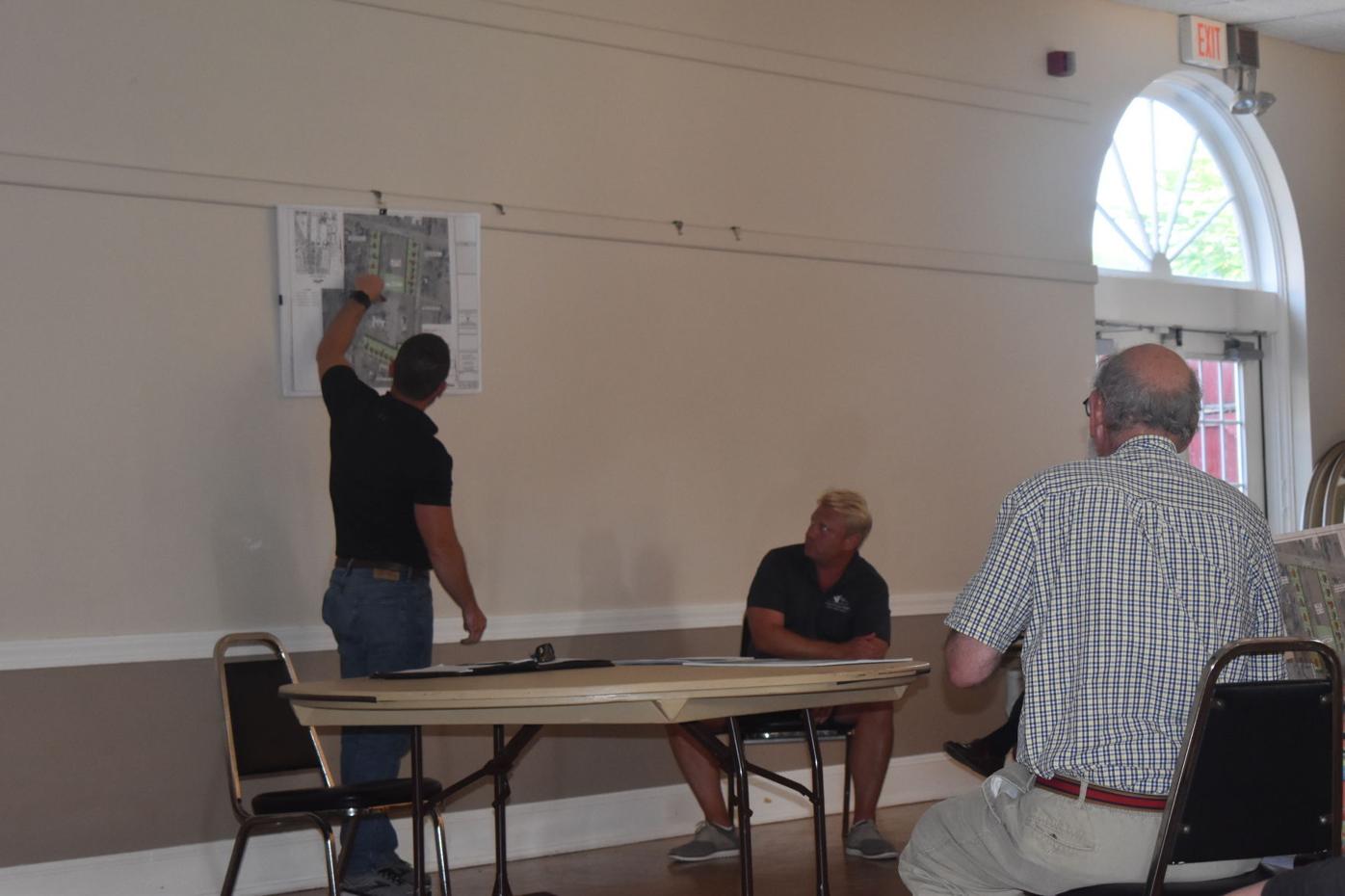 Developers point to the design plans for the Elks Lodge property during a meeting at the club on July 6. 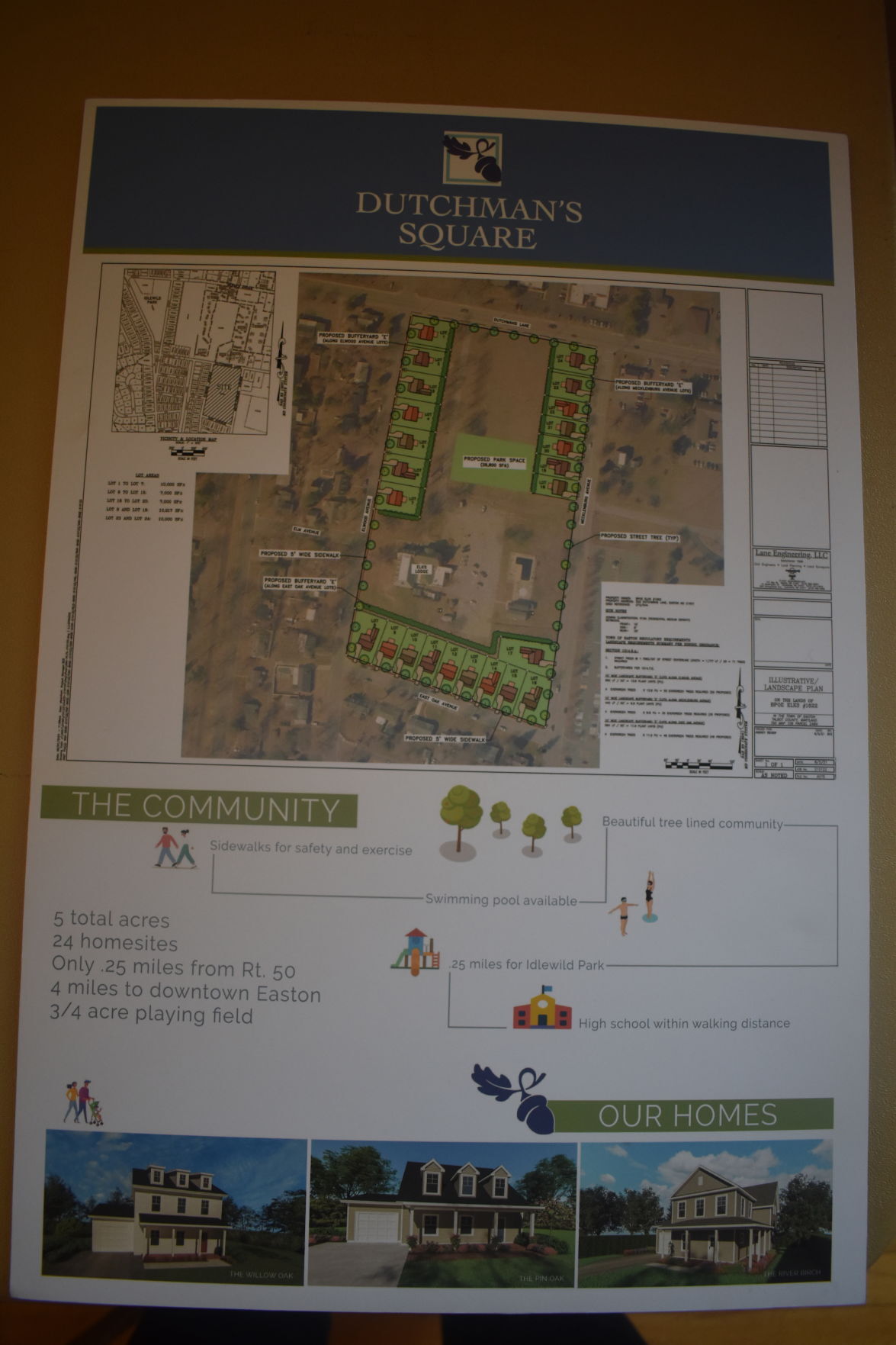 Crowds of homeowners off Dutchmans Lane showed up to an Easton Planning Commission meeting on July 15 to protest the planned development near the Elks Lodge.

A homeowner looks at the design plan for the new development from Paquin Design/Build.

Developers point to the design plans for the Elks Lodge property during a meeting at the club on July 6.

EASTON — The Elks Lodge off Dutchmans Lane in Easton is looking to sell nearly five acres of land for the potential development of 24 homes, raising concerns from nearby neighbors.

The Elks Lodge #1622, part of a national organization of community clubs, has experienced declining membership and revenue, and has struggled to restore its historic building. The club is hoping to profit off the sale of the land to improve the building along with nearby facilities, such as a pool and soccer fields.

Mel Newell, the chairman of the board for the Elks Lodge, told Easton planning officials on July 15, at an application hearing for the development, that the club needs to restore the property.

“We’re selling the property to improve the property,” he said. “That’s an iconic building.”

The project does not have town approval. The town planning commission voted to table the project for the time being at the July 15 meeting, giving the developers more time to reconfigure the concept plan.

But the residents off Elwood Avenue, East Oak Avenue and Mecklenburg Avenue, all of which surround Dutchmans Lane, are concerned about traffic congestion, declining property values, a loss of old-growth trees in the community and single-family homes that look dissimilar to the rest of the neighborhood. The number of homes already in the community reach nearly 200.

“We are against the proposed plan, which sees rather ugly and pedestrian quality dwellings being built facing our existing homes, their driveways spilling onto our streets,” wrote Kirk Ross, who lives at 611 Elwood Avenue, in a letter circulated to local homeowners.

Ross said the Elks Lodge is “seeking to make their financial troubles ours” and added that the homes are “ugly” and “monotonous” in separate comments.

The developers, Paquin Design/Build, plan to develop the 24 single-family homes, with two-door garages and three bedrooms and two-and-a-half baths, at approximately 2,000 square feet for each housing unit. Many of the more modern homes would look different than the brick-rancher styles houses across the street from the proposed lots.

The houses, which could be priced at $400,000 or more, will surround the Elks Lodge on Dutchmans Lane, Elwood, Mecklenburg and East Oak avenues, with a planned open park in the middle of the plot, north of the Elks Lodge.

“This fits the mold of what the town of Easton wants to see,” said Brent Paquin, the owner, in an interview. “I don’t want to have people upset with what we are planning to do. My hope is that at the end of the day, everyone can be happy with the plan and product I create.”

Paquin Design/Build is most known for San Domingo, a waterfront community of 16 homes in St. Michaels. In 2020, the developers were approached by the Elks Lodge to possibly purchase the five acres of property for development.

Paquin held a meeting at the Elks Lodge with concerned residents on July 6, ahead of the July 15 Easton Planning Commission meeting where the developers finally proposed their plans to town officials.

At the packed meeting, residents argued with developers during the contentious gathering.

“I do have significant concerns about what this will do to my property,” said local homeowner Mark Kenney, who expressed disapproval with any development near his 40-year-old home.

At the meeting, a representative for the Elks Lodge board, Skipper Marquess, said that the club had been backed into a tight spot financially.

The property would have to be sold — or the Elks Lodge would be bulldozed, he explained, arguing it would be the only other option, considering the Lodge was built more than 80 years ago and membership stands at 488 members.

“The advantage here is that the Elks do care. Quite frankly, you all know this building is a little old and needs to be repaired. It’s become harder and harder for us to maintain the building,” he said. “This gives us the money to keep the building alive — otherwise we sell it and let the new guy bulldoze everything.”

Others wondered if more homes would actually increase membership, and questioned what the Elks Lodge would do if they ran into more financial difficulties in the future and did not have more land to sell. They suggested the Lodge downsize instead.

“If we do that, and we could — we could do exactly what you want – but what are you going to get in replace?” Marquess responded. “The person coming in will bulldoze everything.”

Other homeowners, less than half of whom are Elks Lodge members despite being eligible, said they were not against saving the club. They were just against the proposed development as it stands.

Objecting local homeowners also raised density concerns, and said the roughly five acres of land for development should fit closer to 16 to 18 homes units, not 24. Paquin has said he could technically build more than 40 units on the property.

Paquin said because of water and sewer constraints, the developers would not purchase the property unless they could build at least 24 homes. Otherwise, they would lose money.

“We made an assumption, and (were) fairly confident, that the whole town block on all four sides already had water and sewer wrapped around it,” he said. But only Dutchmans and Mecklenburg have water and sewer access, raising the development cost for additional infrastructure. “If we had to significantly reduce the amount of lots and builds we did, the property would not be able to be purchased by us.”

Other homeowners protested the potential removal of trees in the rectangular area where developers would build out the homes. They said the trees are old growth, or older than 120 years, and add thousands of dollars to property values and help with stormwater management.

Paquin, however, said the trees would be an asset to the community and he’d only remove the ones he had to, while residents have suggested it would be inevitable that many of the large trees dotting the roadways will be cut.

At the planning commission meeting on July 15, traffic congestion off Dutchmans Lane, a frequent problem because of the nearby Easton High School, was a major concern. More homes could exacerbate congestion, though Paquin said a traffic study was done, and did not show significant changes to the area based off the additional homes.

The traffic study was not conducted when Easton High School was in session.

Dana Newton, of Elwood Avenue, who has lived in the area for 70 years, worries about traffic and parking.

“There are certain times of the year, the cars are double parked literally from one end of Mecklenburg Avenue to the other,” he said. “Unfortunately this is a variable over which none of us have any real, effective control ... but this has to be something that is given very, very serious consideration. If we increase the population to too high a degree, we are going to be endangering the lives and welfare of a certain percentage of” residents.

Paquin has also asked for a waiver from the requirement to build alleyways between houses in the subdivision. Ross, the homeowner from Elwood Avenue, told town planners that there is “hardly a house in the entire neighborhood that isn’t serviced by an alley in some way, shape or form” and to grant the waiver would be detrimental to the town and cluster trash and other litter on the streets.

Paul Weber, the chairman of the planning commission, voiced disapproval with the project and the concept plan after more than an hour of discussions on July 15. He cited a number of reasons for the decision to table a vote on the concept, including forest conservation, stormwater management, open space, alleyways, and architectural styles and designs for the development.

“It’s just not as attractive as an arrangement, I think, for the community,” Weber said. “I hope you would consider other layouts that might be more amenable to the community.”

“It’s impossible for us to accept a premise for putting that number of houses” in the community, said David Reel, who lives off East Oak, on July 15. “Nobody in the neighborhood doesn’t want the Elks to do well. This is not us versus the Elks Lodge. This is us trying to preserve an existing neighborhood that has a really unique character, a really great character, and this plan does nothing to advance that character. In fact, it diminishes it terribly.”