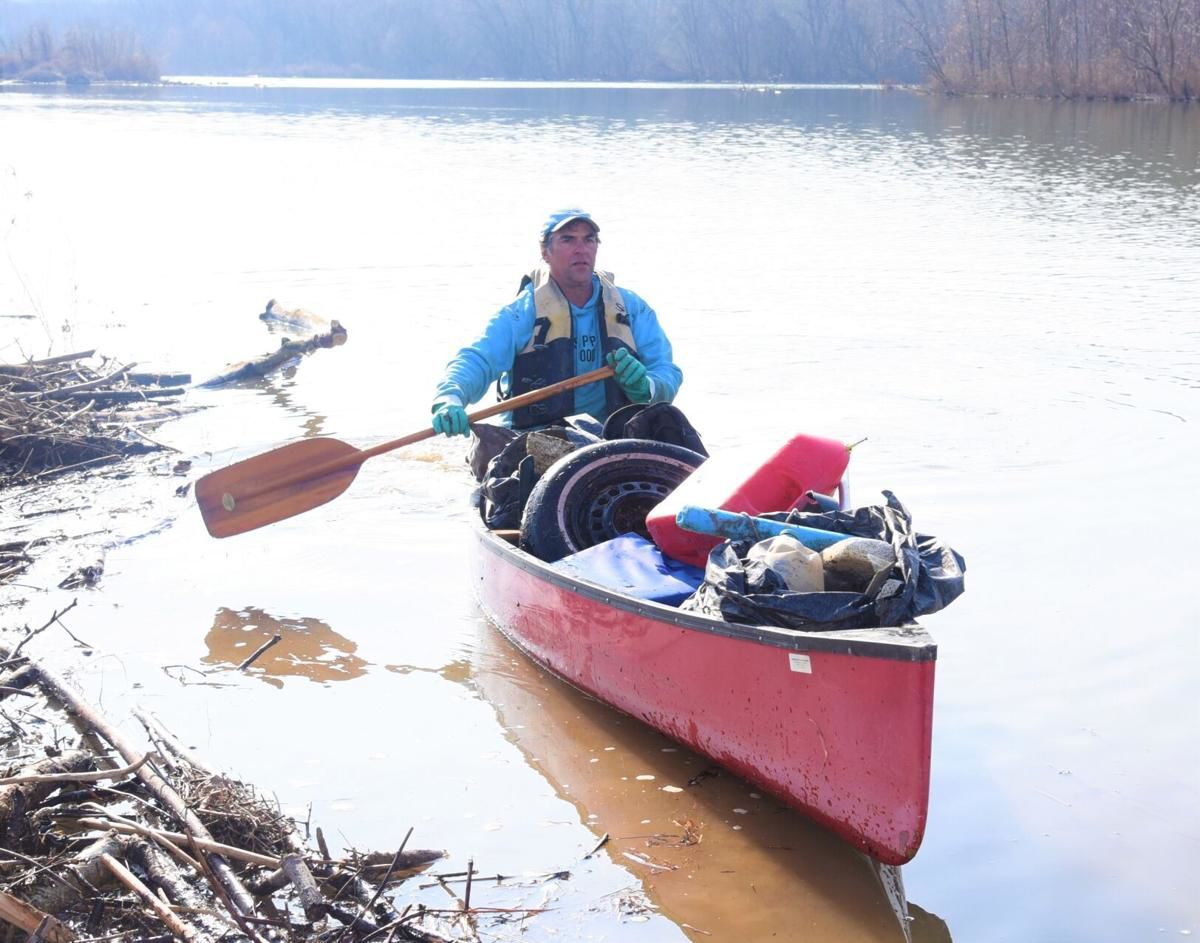 John Naylor of York, PA, collects plastic items and other debris from the often litter-strewn banks of the lower Susquehanna River. 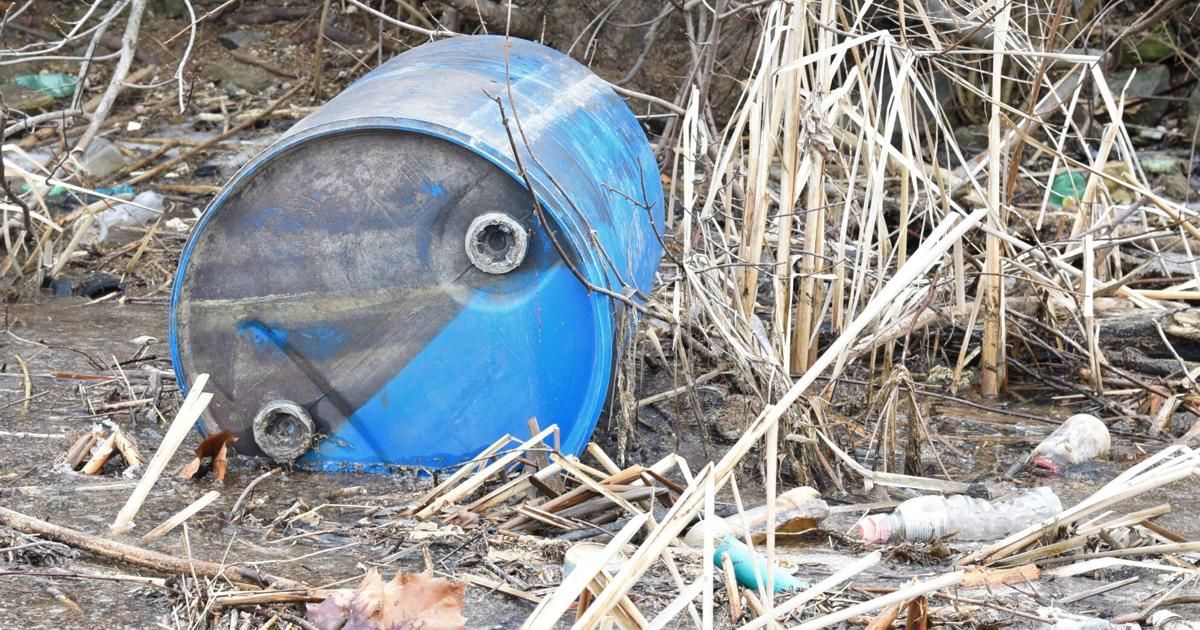 Plastic litter collects along the shore of the lower Susquehanna River. 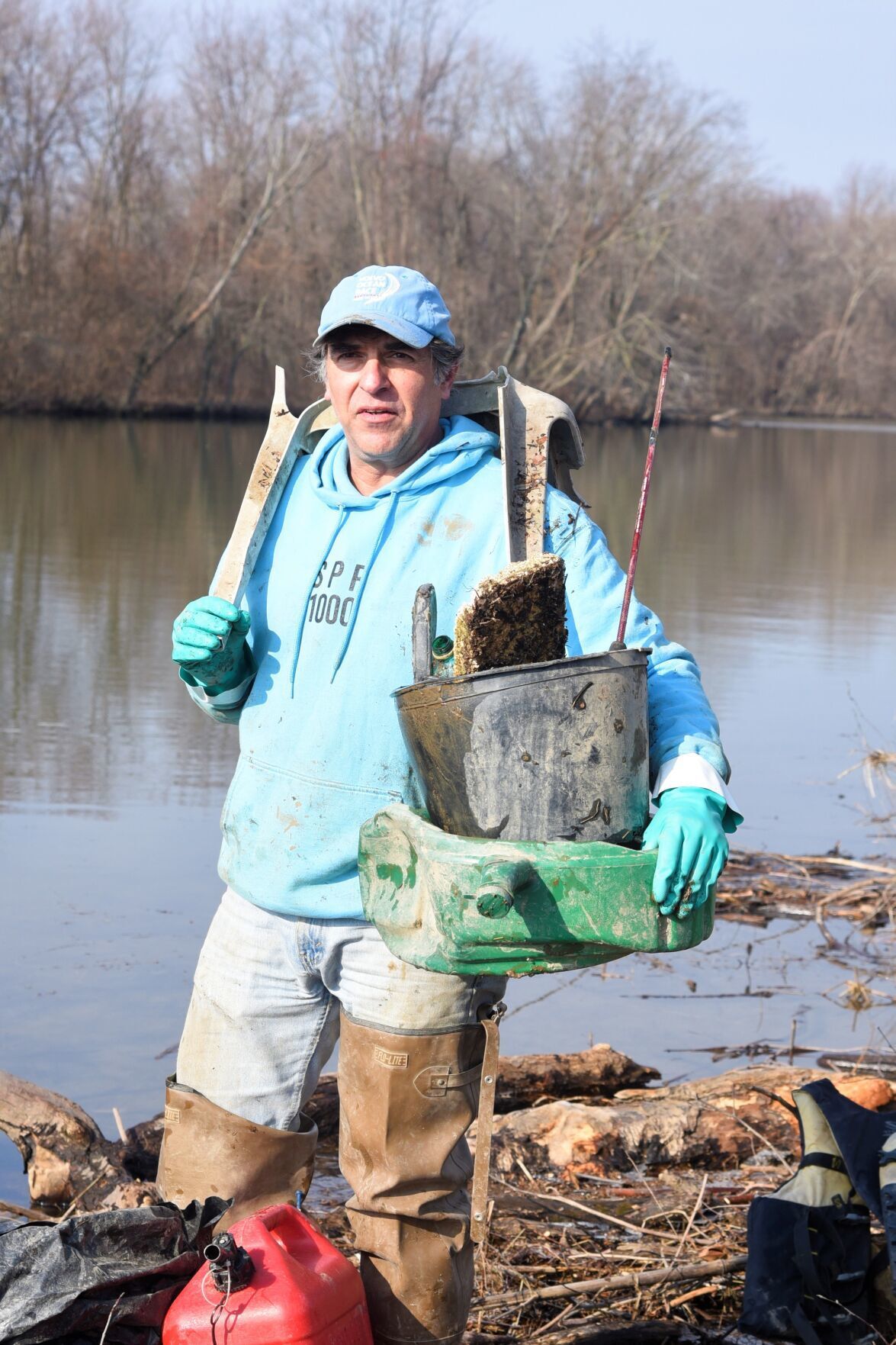 John Naylor began a personal campaign to clean up plastic litter along the lower Susquehanna in 2017.

John Naylor of York, PA, collects plastic items and other debris from the often litter-strewn banks of the lower Susquehanna River.

Plastic litter collects along the shore of the lower Susquehanna River.

John Naylor began a personal campaign to clean up plastic litter along the lower Susquehanna in 2017.

John Naylor eased his 16-foot fiberglass canoe into the Susquehanna River near a small archipelago of forested and ever-changing mudflat islands known as the Conejohela Flats, once the domain of Native Americans and still a vital stop for migrating shorebirds.

It’s a placid and beautiful spot on the lower Susquehanna between Lancaster and York counties, PA. But the York city resident was there this day to nibble at a growing sheen of ugliness — namely, single-use plastic containers, especially discarded water bottles.

The plastic comes down one of the world’s oldest major river systems in alarming volumes and relentless waves after each high-water event. But that doesn’t discourage the 57-year-old Naylor, who for the last four years has filled his canoe once or twice a week with plastics retrieved from the shallows, banks and shores.

To date, he has plucked more than 15,000 pieces of single-use plastics, as well as tons of other litter such as tires, barrels, foam, plastic chairs, flip-flops and more. He doesn’t find many plastic bags, but that’s because they sink in the water, becoming a different kind of menace, if not an eyesore.

For those who sometimes accompany Naylor on these “pickin’” trips, the sheer volume of litter, time after time, can be shocking and discouraging.

At one stop on an uninhabited, narrow woody island, you could barely take a step without dancing around plastic containers. But Naylor, wearing rubber wading boots so he can enter marshy areas, was undeterred. He reached over and scooped handfuls of water bottles, tennis balls, spent shotgun shells, pieces of foam, cigarette lighters and other cast-off items, depositing them in reused plastic trash bags in his canoe.

When the water is high, he has learned over the years, the entire island can act as a strainer for floating debris. The outer bank of any bend in the river is also a reliable trash trap. You can measure the height of the river’s last flooding event by the line of deposited plastics. He also has learned, the hard way, to be cautious of plastic bottles and jugs filled with liquids, which might very well be what he calls “trucker bombs” — improvised urinals employed and unceremoniously discarded by long-haul truckers.

“People ask me, ‘What are you doing? You’re never going to get it all,’” Naylor said. “It’s a little spot on the planet, but I just want to see the Susquehanna a cleaner river. I do it because one guy can make a little noise. It beats not making any noise.”

Naylor’s unrelenting crusade began on a February day in 2017 while he was complaining about the deluge of plastics he saw each time he paddled the river in one of his vintage wooden canoes.

“Quit bitching and do something about it,” one of his buddies advised. So Naylor did, and he set the initial bar fairly high — betting that he could retrieve 1,000 pieces of single-use plastic containers by Memorial Day. His picking trips became a steady routine, once or twice a week, and he posted pictures of each day’s ugly haul on his Instagram account. He hit the 1,000 mark with a few days to spare.

Energized by hitting that goal and by the Instagram feedback, he has continued his personal campaign, plucking plastics on both sides of an 8-mile stretch of river. A shy person, he took to social media in an effort to mobilize other plastic “pickers” and to raise awareness of the constant scourge of plastics fouling their river.

His efforts have taken on new import with the recent research showing that plastics don’t go away: they break down into tiny particles called microplastics that get into our food, bodies and water. Studies show that microplastics harm fish, water quality and human health.

Naylor’s hope is that, with consumer pressure, manufacturers will acknowledge the environmental harm and stop bottling water and beverages in plastic, using glass and aluminum instead, which are eminently more recyclable. He also wants consumers to do their part by buying glass bottles or aluminum cans and shopping with reusable bags. Restaurants can contribute, too, he said, by using recyclable to-go containers and only giving plastic straws to patrons who ask for them.

Many who can’t comb the river themselves live vicariously through Naylor and praise his dedication. He gets comments from all over the world. “Thank-you for taking care of your place in the world,” said one Instagram follower. “Frankly,” another wrote, “I wish every river had people like you who give a damn.”

Among those inspired by Naylor is Phil Wenger, president and CEO of the Lancaster Conservancy, who met Naylor while he was gathering trash in front of Wenger’s river home.

‘’He’s a dynamo and talks constantly about his passion, but he backs it up with equally hard, tiring dirty work,” Wenger said. “River trash seems never-ending. But John inspired those of us who live along the river that if we all do our part, eventually we can clean up the Susquehanna’s banks.”

Naylor accepts no money for his efforts, instead urging donations to the Lower Susquehanna Riverkeeper Association, which hosts river cleanups. He transports his canoe on a dented pickup truck he bought 29 years ago that now has 280,000 miles on it. Recently, to increase his cargo space on the water, he upgraded, as it were, to a similarly banged-up johnboat.

The trash he collects goes to a dumpster paid for by the Lower Susquehanna Riverkeeper Association. The waste is burned in a nearby incinerator that produces electricity.

“In short, I give a damn,” Naylor said. “I want the Chesapeake Bay people downstream to know some of us do care and are making an effort to improve the Bay’s and the ocean’s water quality.”

If you want to keep tabs on Naylor and his efforts, you can find him, and ample photos, on his Instagram account, @Susquehanna_Plastic_Pickn_1000.