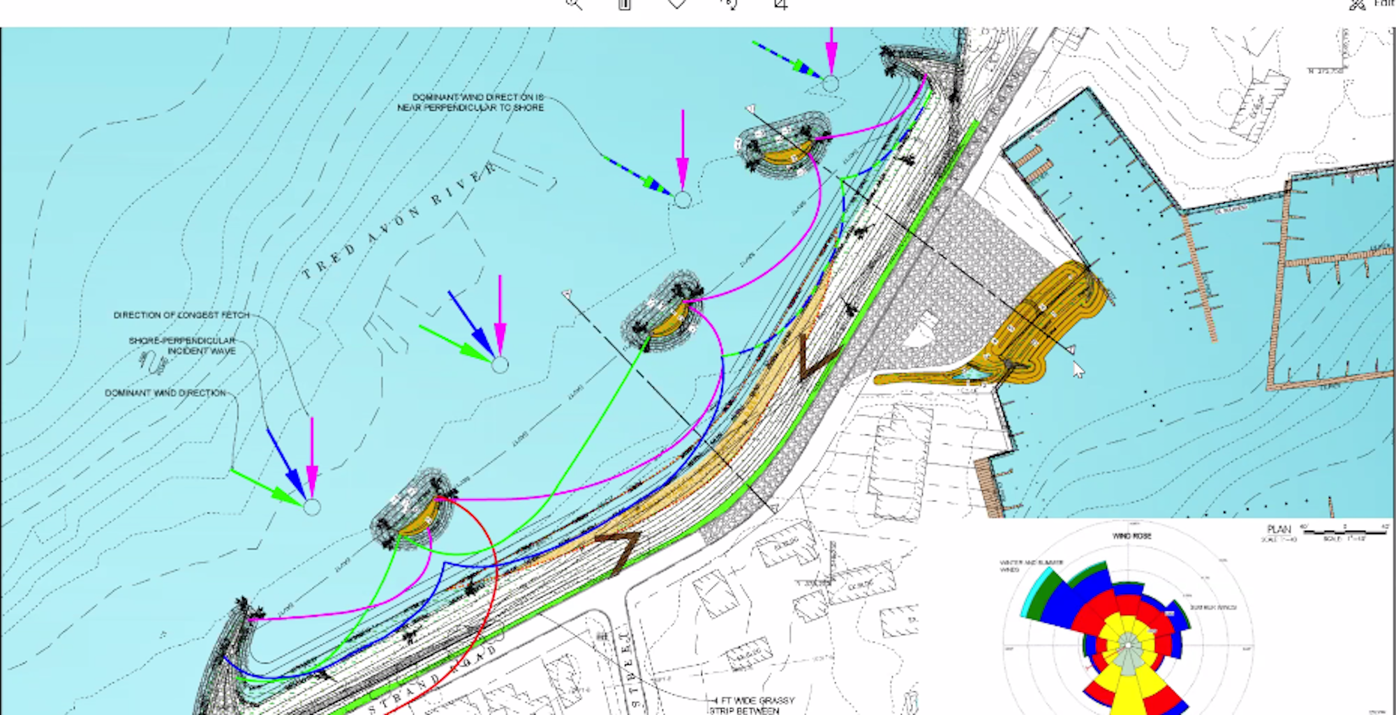 OXFORD — The Town Commissioners of Oxford will officially vote on the Strand Beach Shoreline Improvement Project on April 27. The council has been reviewing the project for the last three years.

Cheryl Lewis, the town clerk, said the design plans from engineering firm Underwood Associates are final enough for an official vote at Oxford’s next meeting. The commissioners all seem in agreement that the shoreline project will help the town reduce flooding.

“We’re shooting at a moving target,” said President John Pepe of flooding concerns in the coastal town. “This is something we have to do all the time — continue to attack this and move ahead with these projects. We could very easily in one storm or two lose that beach.”

The $2.8 million project is funded by grant money from the Maryland Department of Natural Resources and the National Fish and Wildlife Foundation. Both are partners in the project.

The project is one way the town of Oxford — which lies in a floodplain and has an average elevation of 7 feet above sea level — can mitigate flooding ahead of rising sea levels and worsening climate change.

Lewis said the town needs to work to reduce flooding now because “when everybody has a problem” the grant money and state assistance won’t be there.

“We’ve got to attack this (from) many angles,” she said. “This doesn’t solve our problems, but it’s one more piece in trying to build around sustainability.”

The project is expected to take five years to complete after permits are issued. Oxford has already applied for a state permit and the town hopes to secure it by the end of the year.

Improving the shoreline will break stormwater surges through a mimic of natural shoreline conditions. It includes a 1,000-foot sand dune on the beach and three marshy islands out in the waters of the Tred Avon.

Residents have raised concerns about beach access and aesthetic changes, but the engineers have promised the 13,000 square feet of the beach will remain the same square footage after completion. Some of the grassy areas on the beach will be encroached upon, however.

Residents have since asked technical details about the plan, including the long shoreline hooks on both ends of the beach.

Bhaskar Subramanian, the Shoreline Conservation Section Chief for the Chesapeake & Coastal Service at DNR, said the hooks hold sand and cobblestone and are crescent-shaped, which creates a “stable shoreline.”

“These two structures actually hold (sand and cobblestone) in place,” he said.

Chris Hike, with the National Fish and Wildlife Foundation, said the hooks are an “evolution” of shoreline projects that added sand to beaches, but then would later erode away, requiring more and more sand to be added.

“These hook structures have evolved as a means of containing sand that you are putting there in the first place,” he said, “and a way of trapping and accreding more sand — to actually expand what the beach has got already.”

A number of Oxford residents have also questioned why the marshy islands were placed directly in front of the beach and what the philosophy behind the selected location was. Lewis pointed to a “wind rose” at the corner of the design plan, which indicates seasonal wind and wave action.

“It’s all driven by what happens in the air and water,” she said.

Subramanian said each item on the map was selected based on predicted conditions such as the ebb and flow of the tides.

“We design it for predicted conditions. We know the tide is not going to change. We know all these more predictable things,” he said. “Predictable conditions are more effective.”

Subramanian suggested residents review similar shorelines on the Eastern Shore at the Chesapeake Bay Environmental Center in Grasonville and at Windy Hill Farm and Gunston School, both in Centreville.

The goal of the project is to make Strand Beach both “bigger and better,” he added, and the Strand Beach Shoreline Improvement Project is bold but efficient.

“We want innovative projects,” he explained. And especially ones that “push the science forward.”