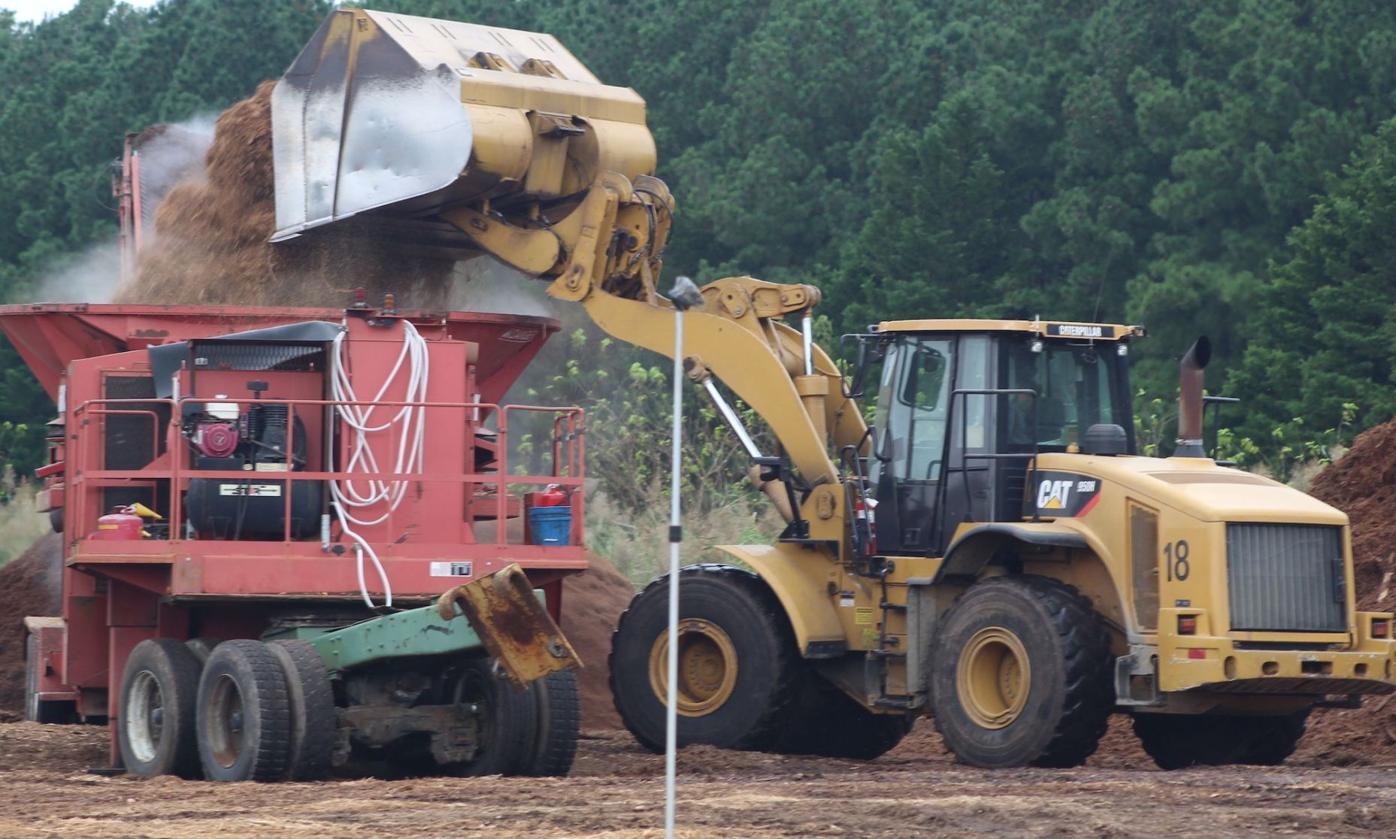 Employees at Johnson Lumber work with mulch at the 100-acre lumber mill. 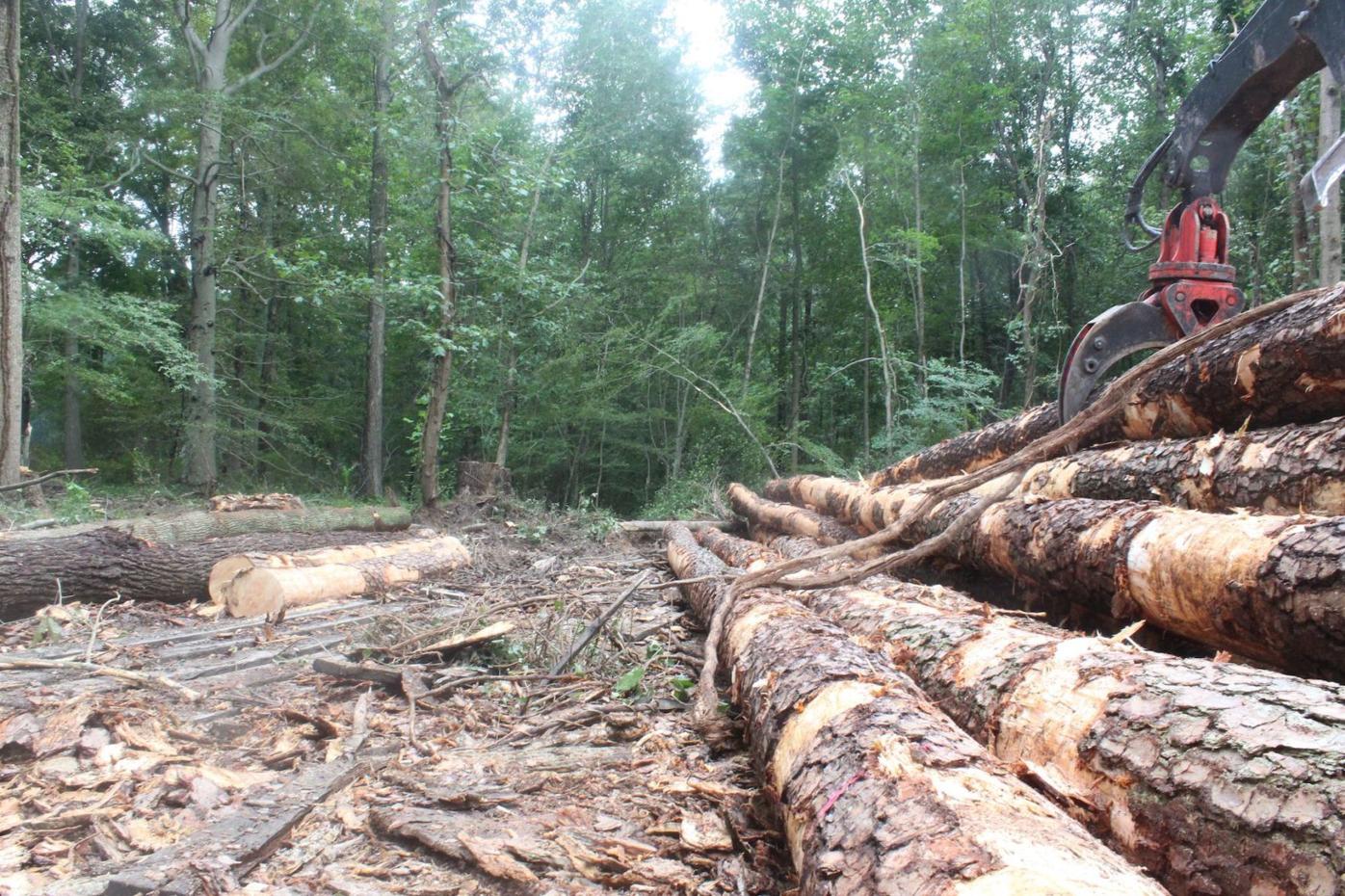 Johnson Lumber collects some felled trees at the property in Trappe in September. Foster hired the company to harvest most of the forest.

Part of the forest on Arthur Foster’s property in Trappe is considered old growth, or more than 150 years old. 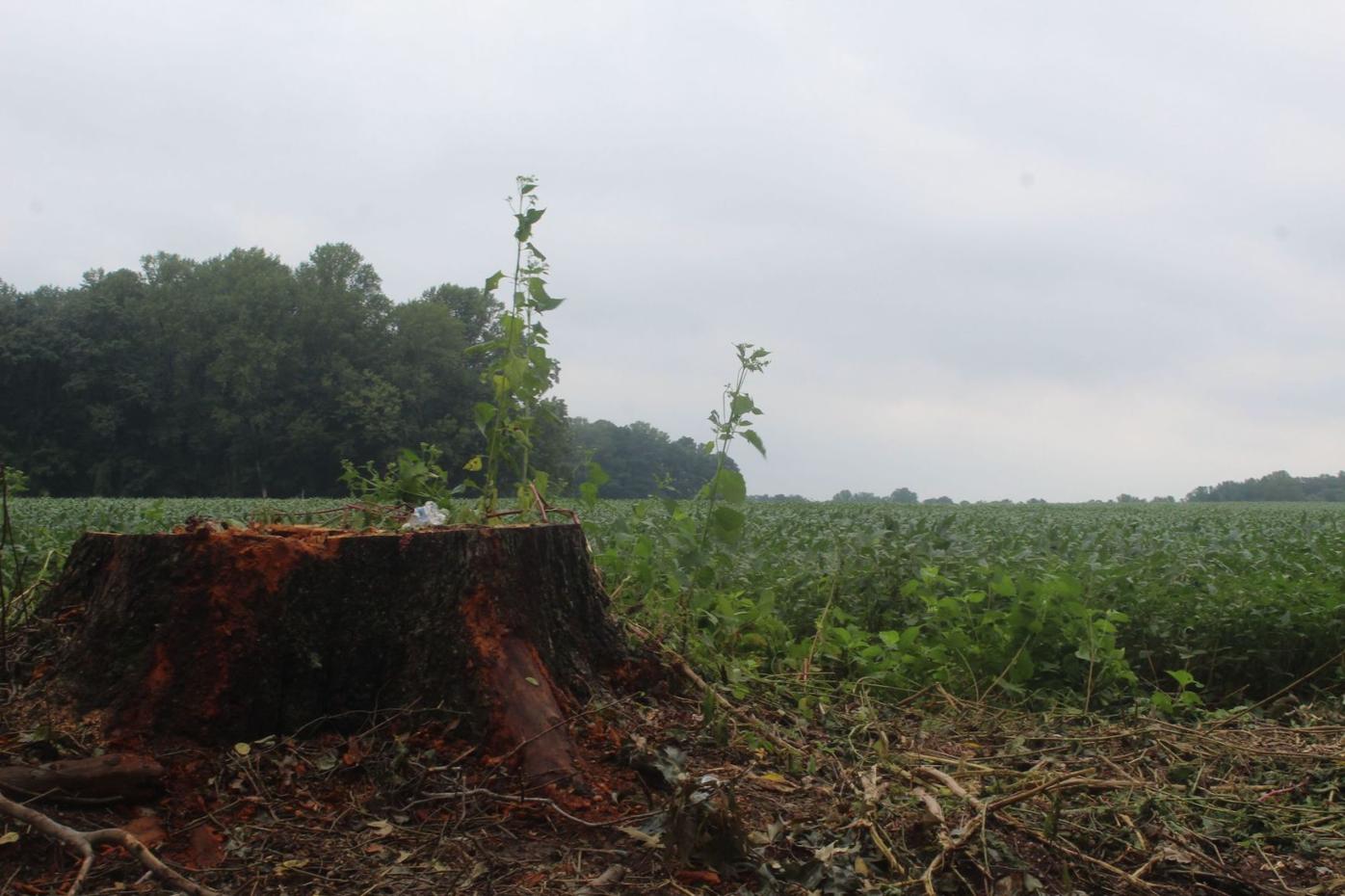 A stump is all that remains of this tree at Arthur Foster’s property in Trappe. 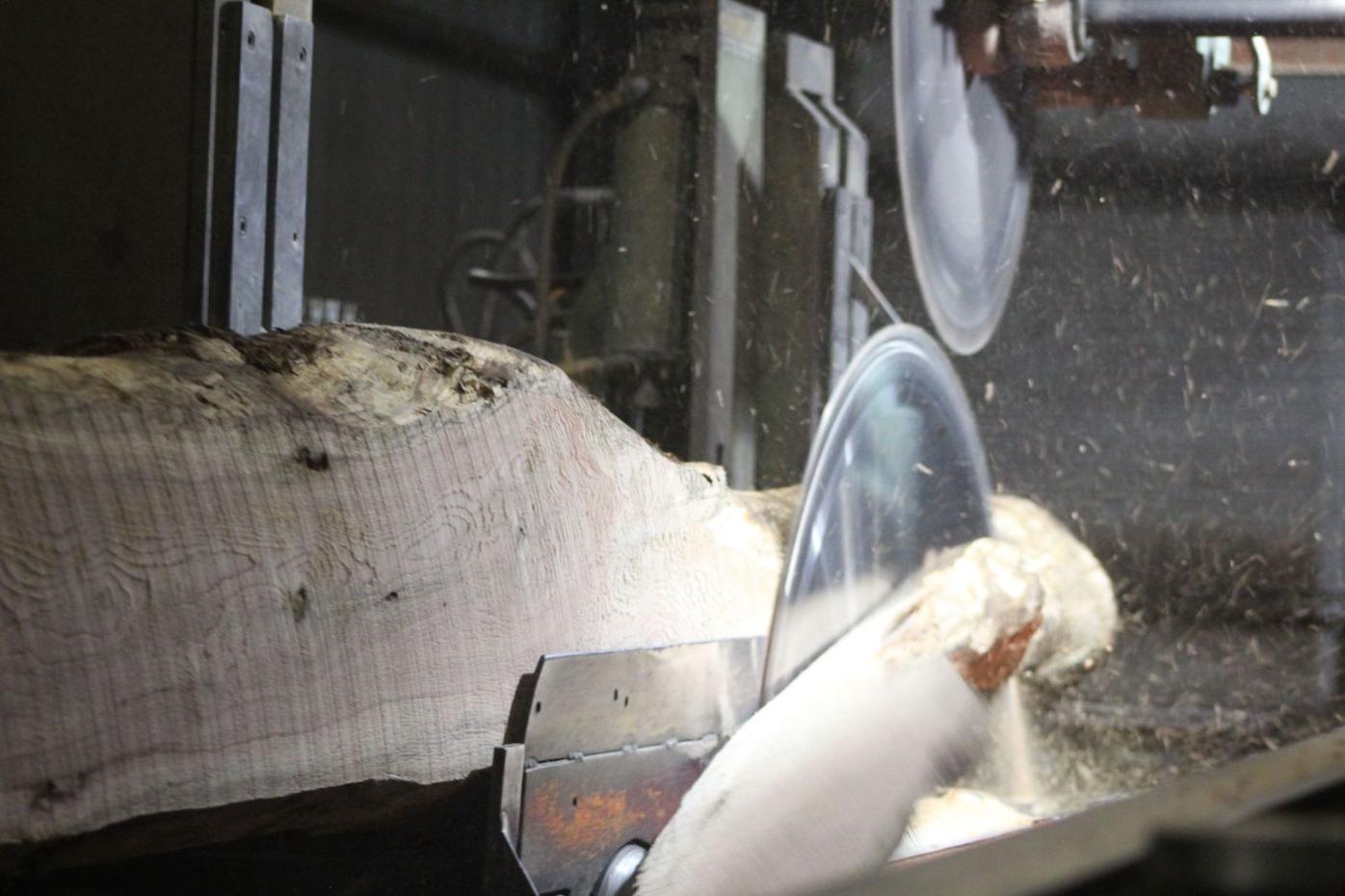 Johnson Lumber was hired by Arthur Foster to harvest a property he bought for more than $3 million. 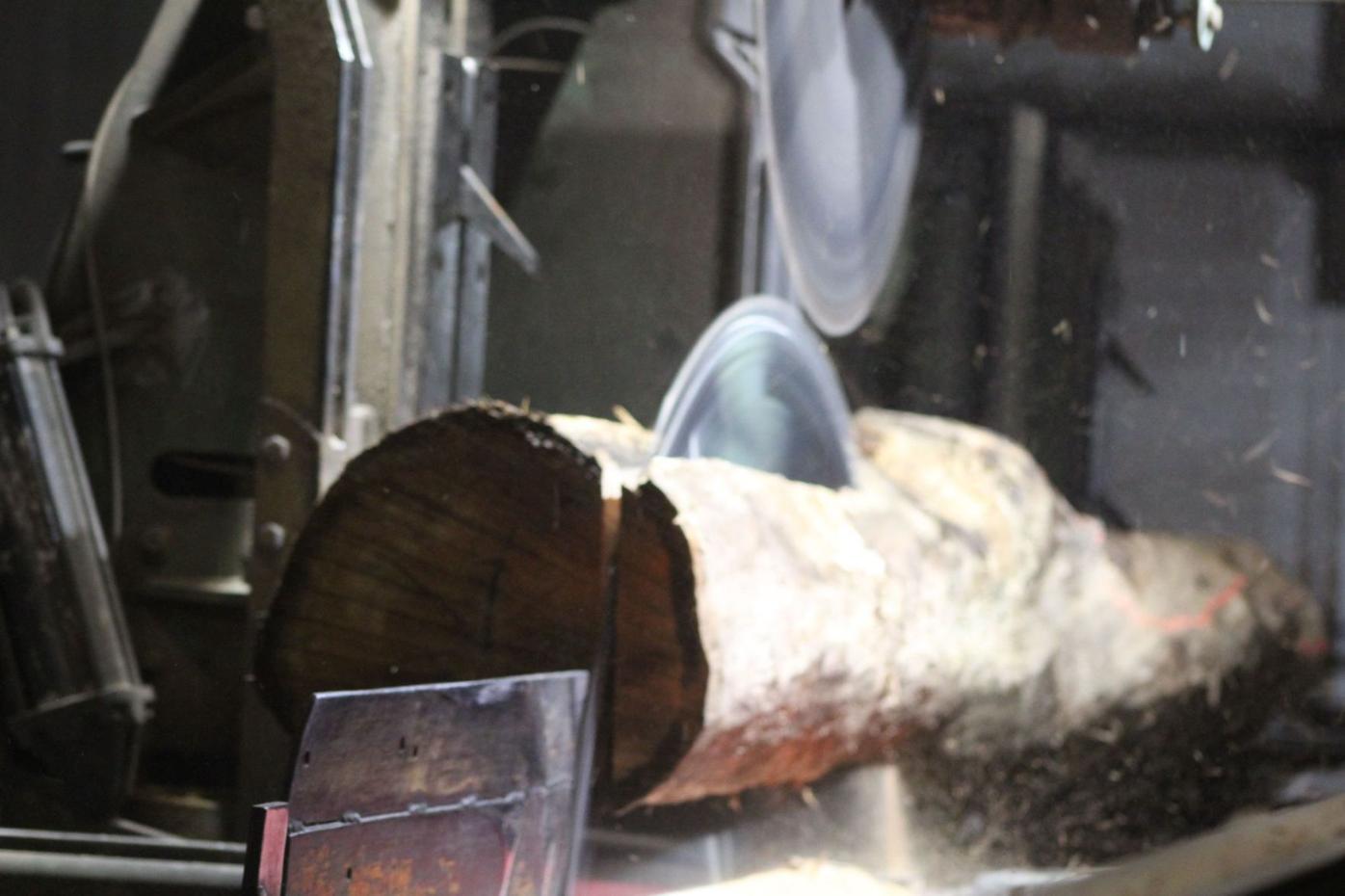 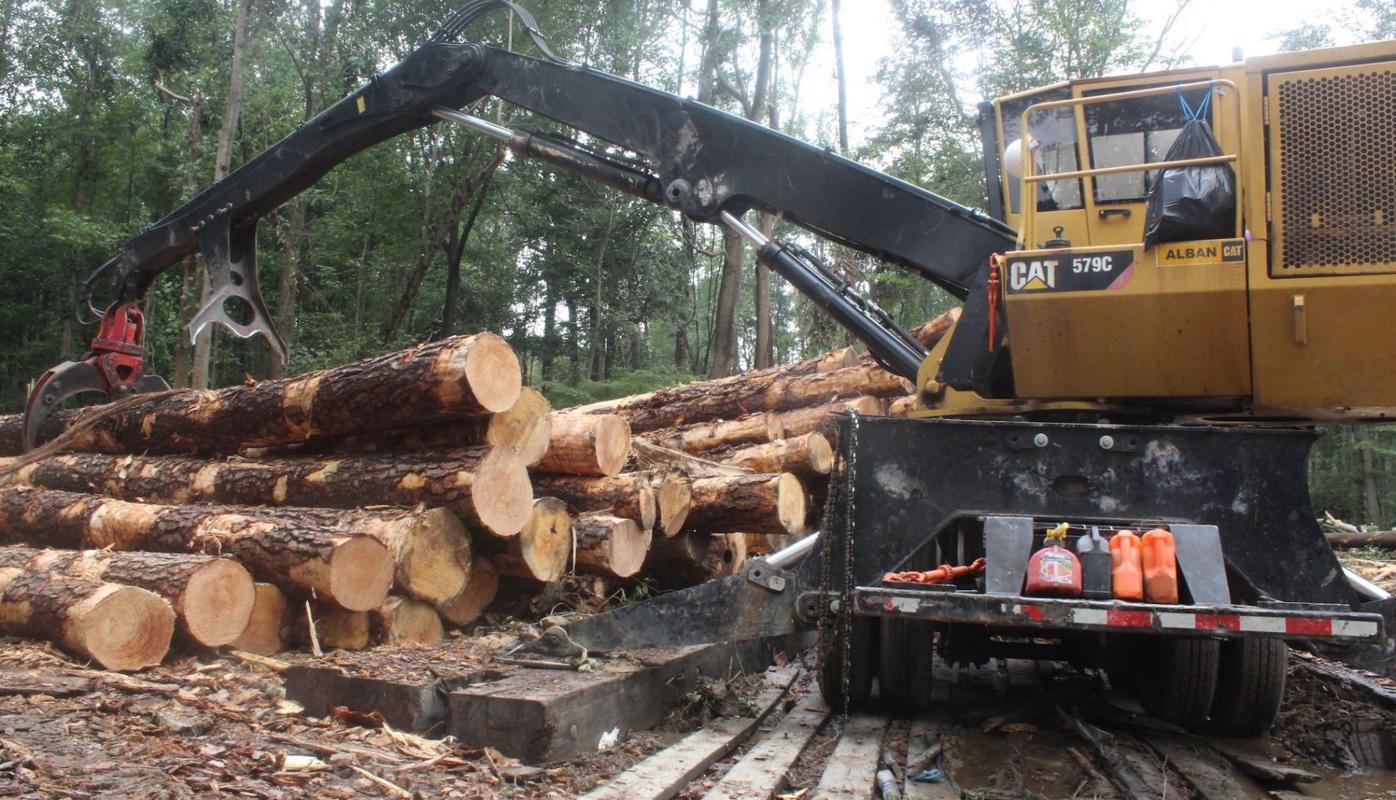 Advocates from the Old Growth Forest Network and other nature enthusiasts have argued that old forests should be considered as a critical area by the county and state. 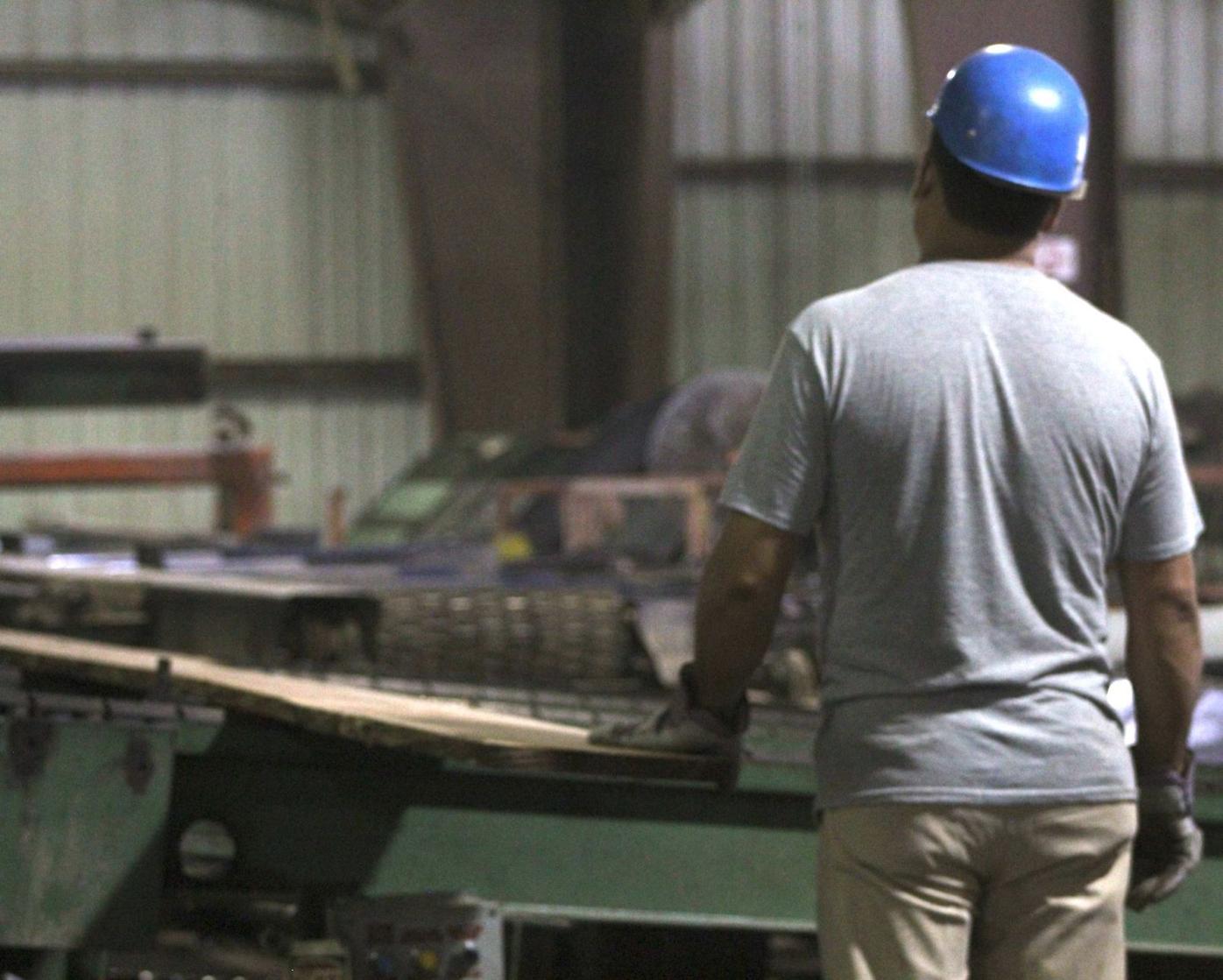 An employee works at Johnson Lumber mill. The company is cutting down 57 acres of an old forest in Trappe. 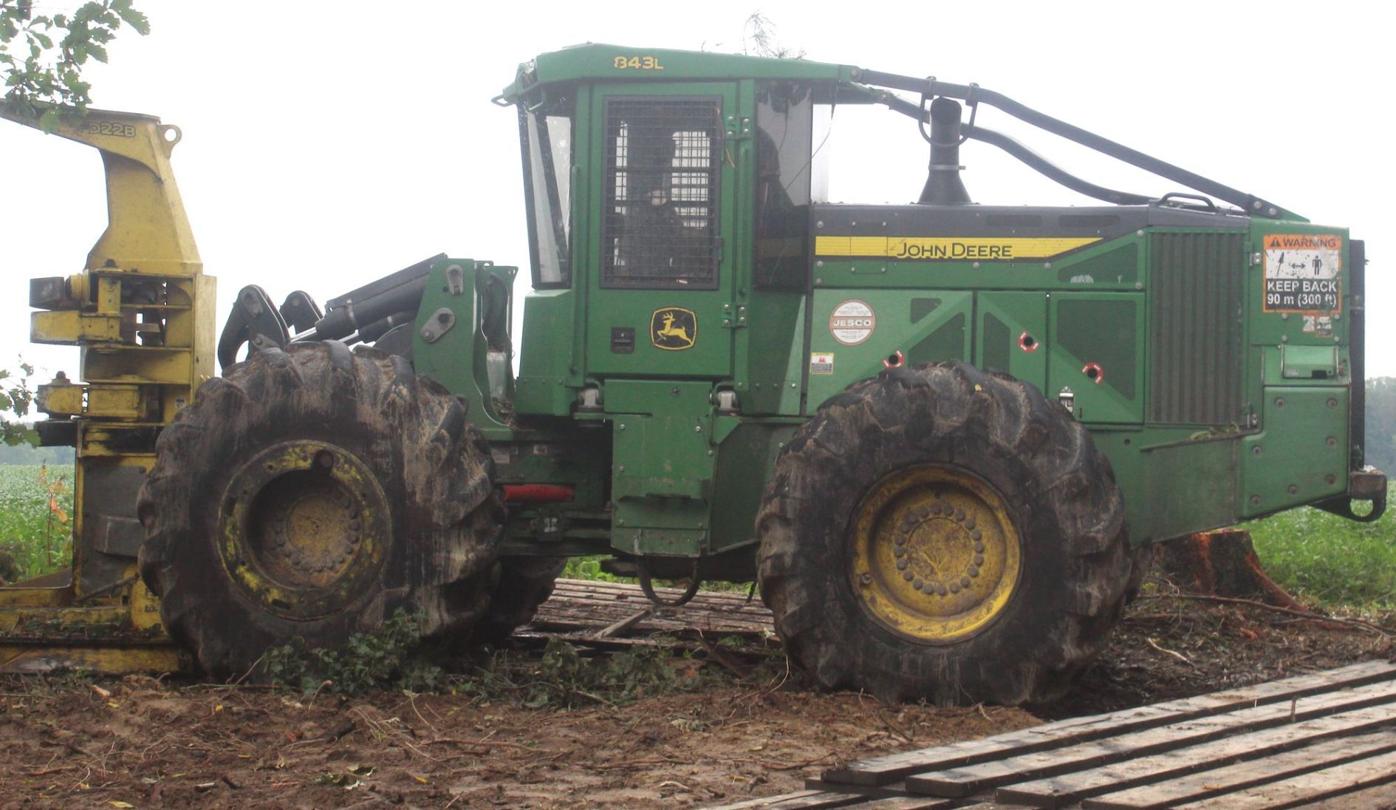 A bulldozer from Johnson Lumber.

Employees at Johnson Lumber work with mulch at the 100-acre lumber mill.

Johnson Lumber collects some felled trees at the property in Trappe in September. Foster hired the company to harvest most of the forest.

Part of the forest on Arthur Foster’s property in Trappe is considered old growth, or more than 150 years old.

A stump is all that remains of this tree at Arthur Foster’s property in Trappe.

Johnson Lumber was hired by Arthur Foster to harvest a property he bought for more than $3 million.

Advocates from the Old Growth Forest Network and other nature enthusiasts have argued that old forests should be considered as a critical area by the county and state.

An employee works at Johnson Lumber mill. The company is cutting down 57 acres of an old forest in Trappe.

A bulldozer from Johnson Lumber.

TRAPPE — The trucks and bulldozers arrived at the old forest off Piney Hill Road around mid-September.

Johnson Lumber was there to harvest the trees, some of which were considered old growth, or more than 150 years old. It was private property, and the landowner had insisted on the harvest. Besides, he wasn’t breaking any laws.

It didn’t take long for the trees to fall, for the stumps to appear, and for the environmentalists and nature enthusiasts to show up in renewed protest.

The harvest infuriated Joan Maloof, executive director of the Old Growth Forest Network chapter in Easton, an organization dedicated to preserving forests across the nation. She traveled to the forest one night and stood in the clearing, looking at the broken land and shuddering, “heartbroken at all the dead stumps” and feeling ashamed that humans had cut the trees down.

“These forests are precious to the next generation, and even if they’re not legally protected we should be trying to preserve some of them,” she said. “We have plenty of young, second- and third-growth forests around here. We don’t have to cut these old growth forests that could have been park land.”

Her organization estimates that “less than 5% of Western and only a fraction of 1% of Eastern original forests, on average, remain standing.” Old-growth forests are historical and they store more carbon and protect more wildlife, the organization says.

Foster is entirely within his legal rights to harvest trees on his own property. Still, environmentalists and some Trappe residents have flocked to the argument that more should be done to protect ancient forests and natural areas that may never grow to be that old again. They point to this scenario as an example: anyone can buy property somewhere and tear it down if they wish. Many are questioning whether there should be more regulations to protect important natural areas.

Foster bought the 423-acre property in Trappe for $3.2 million on March 24. Frankford Farm, beginning at 4084 Smiths Mill Road, previously had been owned by the Church of Jesus Christ of Latter-day Saints, Washington Stake.

Foster, who owns multiple farms across the Delmarva Peninsula, wanted it for agricultural land. He needed the trees cleared for more open farm space. The money from selling the wood was a bonus.

Foster ordered 57 acres of timber cut. Johnson Lumber was eager for the job.

“On a scale of one to 10, the job is probably a nine,” said Alan Johnson, the owner of Johnson Lumber. “This has been a planned harvest for a few months. We weren’t just sent here to cut it down.”

There was a months-long effort by the Old Growth Forest Network to sway Foster with an easement — essentially trying to buy him off. But Foster, 92, said he did not want to be told what to do. No set price was put on the table, and the talks died down fast.

Maloof brought Calvin Yowell from the Izaak Walton League, Matt Pluta from ShoreRivers and multiple concerned residents into the fight, including those who had property adjacent to the old forest. After failing to convince Foster, they contacted the county and Maryland Department of the Environment, but the planned timber harvest was not in a critical area, they were told.

At the county level, the Talbot County Department of Planning and Zoning exempts all timber harvests under the Chapter 73 Forest Conservation code. Since the operation does not result in construction or other developments, the county has no say to stop it. The age of a forest is not considered.

“It’s a forest now, and it will be a forest after,” Elisa Deflaux, a planner for the county, said. “If it was a Home Depot (being built), they’d have to do a forest conservation plan, but this is exempt. It will be monitored by a forester.”

After filling out a declaration of intent and earning an exempt status from the county, Johnson Lumber’s designated forester James Finnegan inspected the property and decided part of the 73 acres of the forest would not be cut. There was an eagle’s nest on the property that is exempt, and a 50-foot buffer between the Miles Creek and the planned timber harvest.

Finnegan submitted a harvest plan to the Talbot Soil Conservation District, which approved the plan on July 21.

The Soil Conservation District, an arm of the state, only looks at the harvest plan to determine it is addressing any potential water quality or endangered species issues.

“We don’t distinguish between an old-growth designation and a non-old-growth designation,” said Shawn Smith, district manager for the Talbot Soil Conservation District. “We look at it, if it is a harvestable product, and if it is environmentally protective. We don’t do anything different for old growth forests.”

Maloof said that process is flawed. On the Eastern Shore, only two other forests are deemed old growth: the 114-acre Schoolhouse Woods in Queen Anne’s County and five acres of the Pocomoke State Forest.

“As far as what’s left on private land, we don’t really know,” she said. “We need to think about not only the animals but the humans that come after, too. If somebody is going to cut an older forest, there should be some way for local people to learn about that and see that forest. And if the community decides yes, then perhaps you’d have the opportunity to pay the landowner for the value of preserving that forest.”

Roughly 20% of the forest is considered old growth, according to Finnegan, Johnson Lumber’s forester. But Maloof says anything older than 80 years is a mature and aged tree, which would make most of the property “old growth.”

While there are no rare trees in the forest, it has a diverse collection of them including ironwood, sassafras and American holly.

Paul Spitzer, an avid bird watcher and ecologist who has lived in Trappe for 25 years, said he spends much of his time hiking through the forests.

Spitzer was distraught when he heard about the harvest. He compiled a document listing all the birds in the forest. None were endangered but the species are unique wildlife nonetheless, he said — including the bald eagle, a belted kingfisher and the great horned owl.

“If you could put a single sentence into four words: a huge missed opportunity,” Spitzer said. “These birds will have to go somewhere else and see if they can fit in. They are species that are found in mature forests on the Eastern Shore. A great deal of land has been converted into agriculture here and (old growth forests) are almost a legend now.”

Johnson defended the harvest. He said the forest will regenerate naturally and the cut forest will attract a lot of other wildlife.

“People need to understand forestry has been a practice that has been around,” he said. “It’s a renewable resource. The people who get most upset live in a wooden house, using wooden products everyday. I don’t understand the mentality of that.”

The U.S. Forest Service issued a report in 2003 that warned against current state and federal policies allowing for forests to be cut, such as what happened in Trappe, deeming them inadequate to protect old-growth forests.

“Under current federal policies, mature forests, which are the source of future old growth, would decline over the long term,” the report read. “Forest diversity is necessary if we are to retain or restore the full range of habitats and ecological functions in forests.”

Maloof agrees. She said she is not opposed to cutting forests, and only wishes to maintain what she thinks should be a “critical area” in the future.

“Data shows that plant communities never fully recover (after a cut), and we have a lot of invasive species coming in,” she said. “If you cut that forest a couple hundred years ago, it might have recovered better than it will now. We have a lot more extreme weather than we used to. I doubt that forest will ever recover to what it once was.”