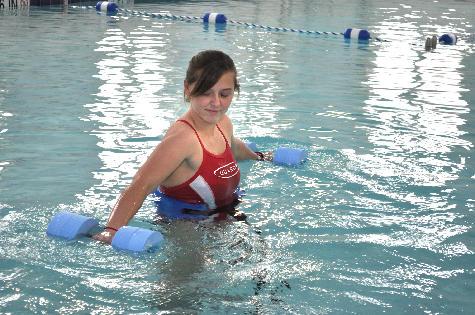 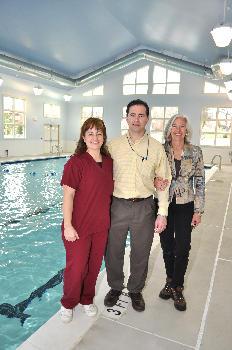 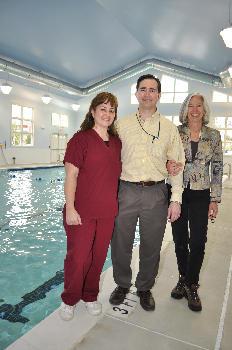 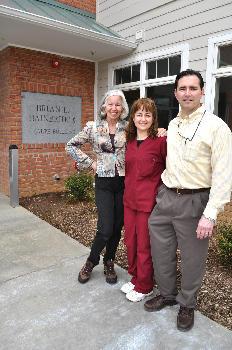 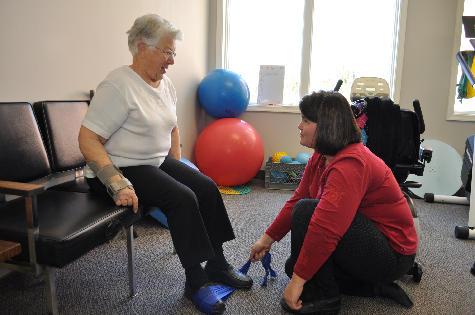 CHESTERTOWN Julia Bainbridge founded Chestertown Physical Therapy and Rehabilitation in 1985. The practice started small with Bainbridge, an aide and a secretary working out of the medical office building at the Chester River Hospital Center.

The business grew steadily, adding occupational therapy, speech therapy and employees. In December 2000, Bainbridge's daughter, Joanna Blackburn, and her son-in-law, Bruce Blackburn, moved to Chestertown from the Baltimore area to take over the day-to-day operations of the practice. The three family members jointly own the practice.

In recent years, as the hospital and physical therapy practice grew, the family of therapists began looking for a lot on which to build a new building to house not only the practice, but also a gym.

"We had patients coming in for therapy, they would finish their therapy and a couple of months later they would bounce back in because they had regressed," Joanna Blackburn said. "We started to do classes where people would continue to come into our gym at the medical building and they would just pay a monthly fee. We could see these people who wanted supervision from therapy. We thought, 'Why don't we build a gym?'"

After more than five years of planning, the family vision became a reality when AquaFit opened Jan. 12 in the 23,000-square-foot Brian E. Bainbridge Health Building on High Street in Chestertown, which the family owns. In addition to the gym, the three-story building also houses Chestertown Physical Therapy and Rehabilitation and several other health and wellness practices.

"The concept for our health and fitness club is partly the result of many of our patients wanting to continue or expand their exercise program after completing their prescribed physical and occupational therapies," Blackburn said. "But they wanted to do this under our supervision. Additionally, science and our early professional training proved that the best possible way to be happy and healthy as we get older is through proper exercise and nutrition."

AquaFit features a gym with free weights, Precor and FreeMotion Fitness equipment, an aerobics studio, a cardio studio with treadmills and ellipticals and a stationary bike "spinning" studio. AquaFit also has an aquatics center with a 30-foot by 50-foot warm saltwater pool with "endless swimming jet capabilities" for endurance and strength training and a 10-person spa. The pool and accompanying locker rooms are handicapped accessible.

"Primarily, we were looking to gear the gym to Baby Boomers," Blackburn said. "It is a more medical-based model with physical therapists and physicians in here."

The building features automated external defibrillators and emergency call switches with direct lines to 911 throughout. The cardio room is supervised during certain hours by a senior fit specialist and many classes are geared towards older people.

"We really tried to think from a safety perspective," Blackburn said. "Kent County is a retirement community. We are trying to offer them a place to go that has a little more supervision."

Chestertown Physical Therapy and Rehabilitation's patients will also be able to use the gym and warm-water pool. Patients with arthritis or joint replacements or who are recovering from a stroke can benefit from aquatic therapy and exercise because it can reduce pain and discomfort while increasing physical function.

"The pool is going to make a huge difference for us," Blackburn said.

AquaFit now has around 525 members and the owners expect another 250 to 300 members to sign up after the pool opened March 30, Blackburn said.

"You should be able to find something for everybody," Blackburn said.

AquaFit is offering after- school programming for kids from third to sixth grade, and is looking to offer fit camps during the summer, as well as start strength and conditioning programs for high school age athletes, Blackburn said.

The building was designed by Dunning Associates Architects of Pennsylvania and built by Wilson-Taylor Builders of Chestertown. Construction began with the digging of 70 geo-thermal wells. The wells are being used to heat the club's pool and spa water as well as to help heat, cool and naturally humidify the entire building.

The building also incorporates "green" flooring, paint and other elements, and will consume approximately 15 to 20 percent less energy than a conventional building.

The Brian E. Bainbridge Health Building, is named in memory of Bainbridge's son, Brian, who contracted meningitis and died in 1997 during his first weeks at physical therapy school in Scotland.

"Naming the building for Brian is our way to keep him very much in the forefront of our family's values," Bainbridge said.

The building recently received the award for the "best-designed large commercial building" in 2008 from the Chestertown Planning Commission.

The opening of the new building has created about 20 jobs, from personal trainers and fitness instructors to lifeguards and administrative personnel, Blackburn said. Now, between AquaFit and Chestertown Physical Therapy and Rehabilitation, the two businesses employ about 40 people, she said.

"Finding employees has not been difficult because of the economy," she said. "We still have people coming in. We just make sure that we are picking good people and fitting them in."

Blackburn is surprised that the business has not faced challenges with the economy. Since January, the physical therapy business has been booming and gym membership numbers are ahead of schedule, she said.

"What we are finding is that people are willing to spend money on their health," she said. "There is a whole health and wellness wave and I think people are realizing that they need to spend money on themselves. We have been pleasantly surprised. It is almost like if we can make it in this economy then once the economy turns around we will be very happy."