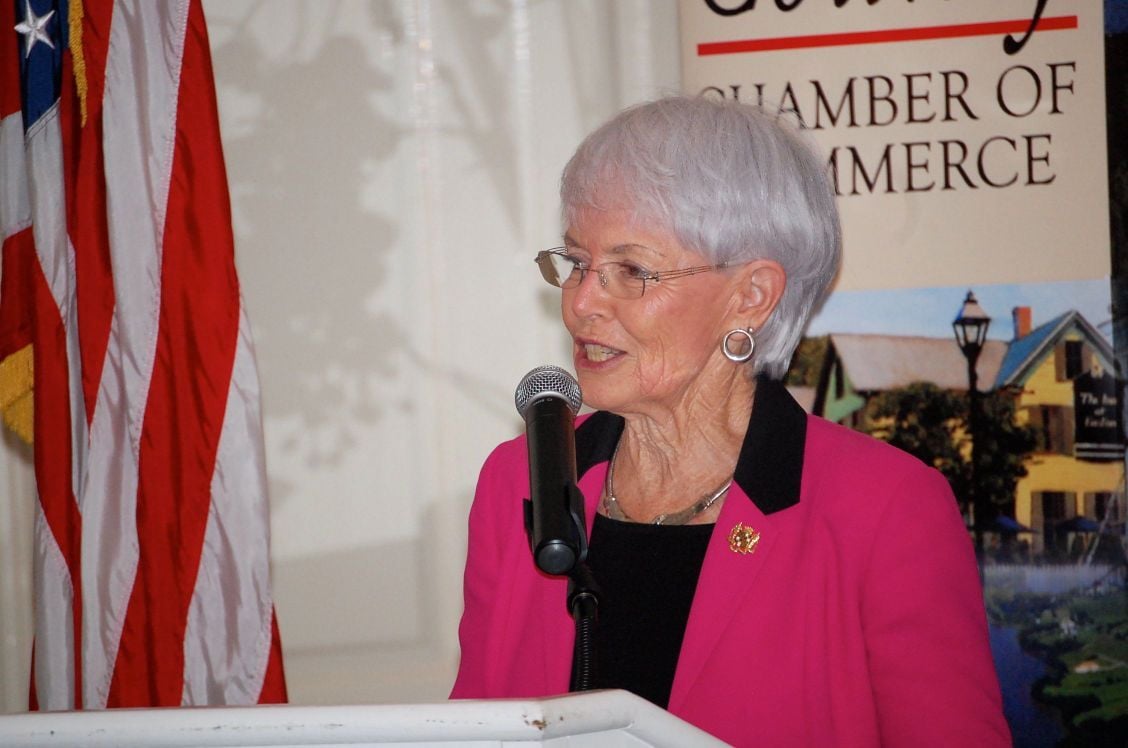 Sen. Addie Eckardt, R-37-Mid-Shore, gives an update on the 2015 General Assembly session at a Talbot County Chamber of Commerce luncheon on Thursday, May 21, at the Tidewater Inn. 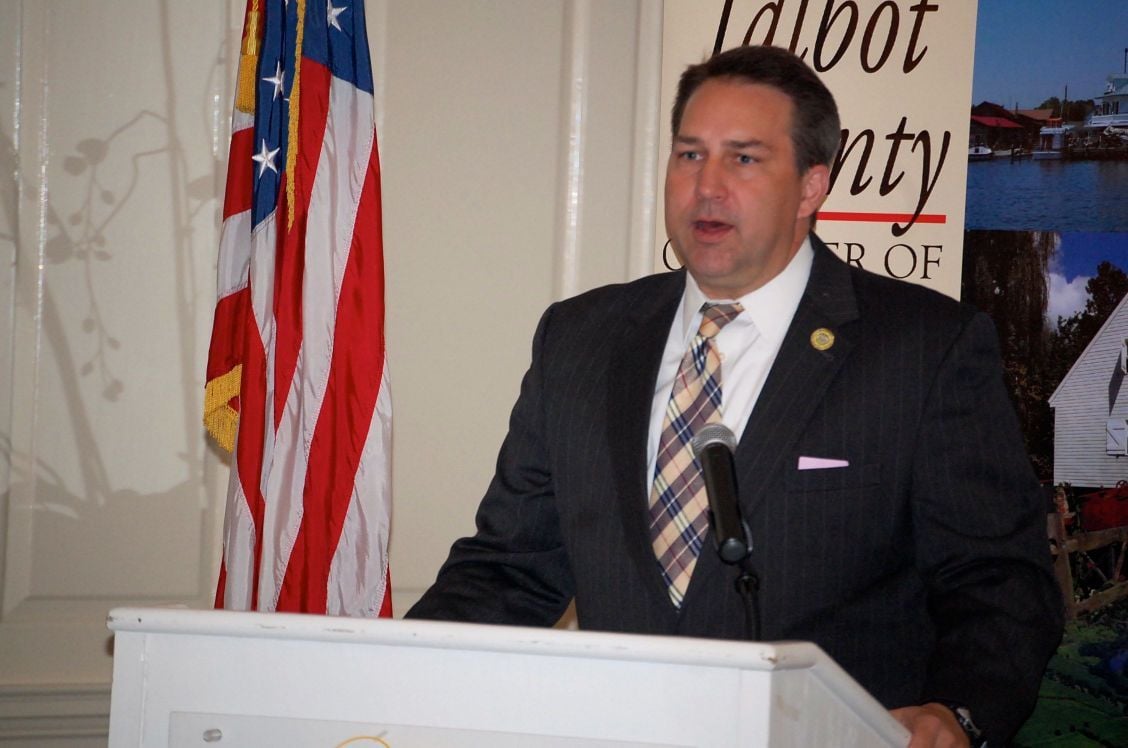 Del. Johnny Mautz, R-37B-Talbot, speaks about his first Maryland legislative session as a delegate at a Talbot County Chamber of Commerce luncheon on Thursday, May 21, at the Tidewater Inn. 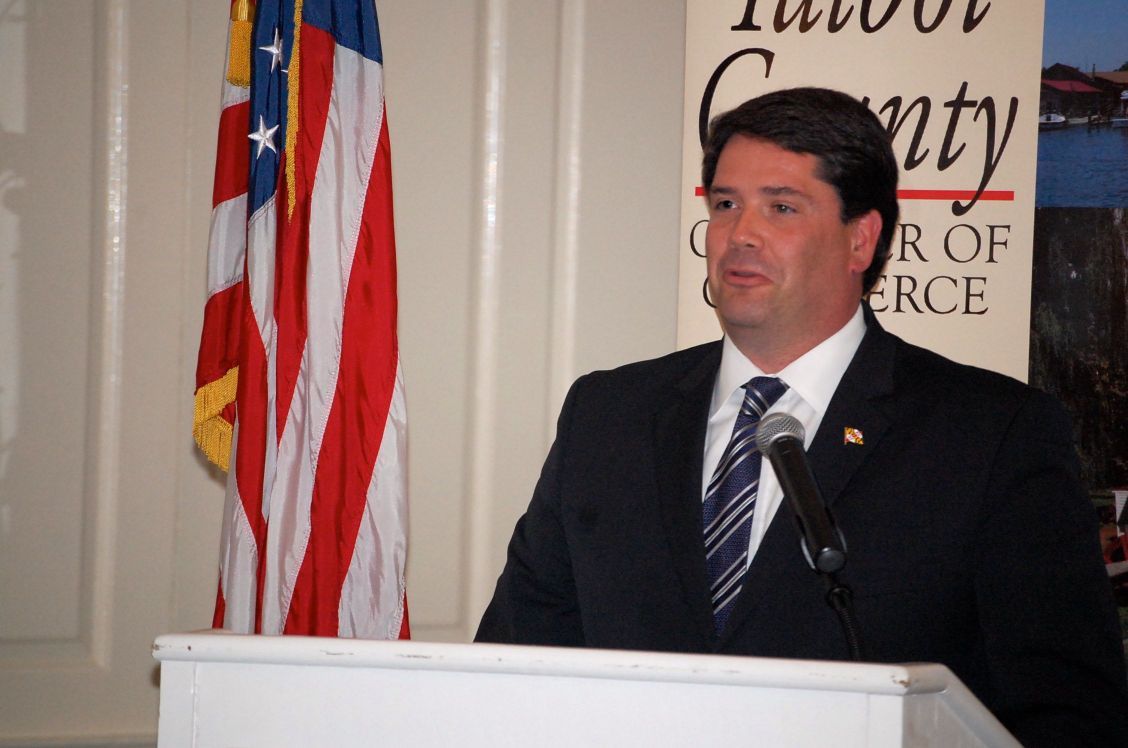 Del. Chris Adams, R-37B-Wicomico, speaks at a Talbot County Chamber of Commerce luncheon on Thursday, May 21, at the Tidewater Inn.

Sen. Addie Eckardt, R-37-Mid-Shore, gives an update on the 2015 General Assembly session at a Talbot County Chamber of Commerce luncheon on Thursday, May 21, at the Tidewater Inn.

Del. Johnny Mautz, R-37B-Talbot, speaks about his first Maryland legislative session as a delegate at a Talbot County Chamber of Commerce luncheon on Thursday, May 21, at the Tidewater Inn.

Del. Chris Adams, R-37B-Wicomico, speaks at a Talbot County Chamber of Commerce luncheon on Thursday, May 21, at the Tidewater Inn.

EASTON — Mid-Shore lawmakers on Thursday, May 21, at the Talbot County Chamber of Commerce luncheon gave a wrapup of the 2015 General Assembly legislative session.

Much of the discussion centered on Gov. Larry Hogan’s proposed fiscal year 2016 budget, which he introduced to the legislature the day after his inauguration.

It was a balanced budget that handled the state’s structural deficit into the future, Sen. Addie Eckardt, R-37-Mid-Shore, said Thursday.

“Was it skinnier than usual? Indeed it was, and of course, there was some consternation about that,” Eckardt said. “But when all was said and done, we passed a budget with slightly over a 1.8 (percent) increase — less than that probably — to what had been a 5.8 (percent) increase from year-to-year. So it went back to levels from a long time ago.”

Even though there were differences of opinion on different elements of the budget, or “how to rearrange the chairs on the deck, if you will,” Eckardt said, the budget “did come out much better than before, and that’s to the governor’s credit.”

It was also because leadership, at least in the Senate, Eckardt said, was willing to work with Hogan and give him a chance, rather than inherently shun his agenda.

One of Hogan’s biggest initiatives was what he called making Maryland “open for business,” after years of opinions floating around that Maryland had an anti-business environment.

That same goal, to make the business environment better in the state, was why Del. Chris Adams, R-37B-Wicomico, ran for a House of Delegates seat last year, he said.

Adams, president of Value Carpet One headquartered in Salisbury, said the commission came up with 31 recommendations during last year’s session and came up with five bills that passed this session.

“As a businessman, when you go to Annapolis and you’re saying, ‘What’s Maryland going to do to help the business community?’” Adams said. “They actually did it.”

Adams talked about two of the commission’s bills that resonated with him.

One bill mandates that all state agencies have to go through customer service training and employees must learn how to interface with the business community. It’s a reaction to the anti-business attitude against the state, Adams said, a realization that it needs do to something to compete with surrounding states.

The other bill reorganized the cabinet departments to create a secretary of commerce for Maryland. One of the secretary’s jobs is to make sure there is interagency connectivity, “so we can to Maryland about how, say, the Department of the Environment is impacting business and how business grows,” Adams said.

“Maryland has been very negative in that regard. We needed to have a more responsive government, and I think that secretary of commerce could very well be that person,” Adams said.

Both Adams and Del. Johnny Mautz, R-37B-Talbot, are on the House Economic Matters Committee. Both were “very much attached at the hip” this past session, Adams said — they shared an office suite, they sat next to each other on the House floor, they represent the same district and sit on the same committee together. It also was the first year for each as a state delegate.

“Half the legislature was new this year, and most of the beginning part, the first month or so in committee work and on the House floor, we (delegates) spent time getting to know one another,” Mautz said.

They both, along with Eckardt, also supported a bill that passed and was signed by Hogan that allows the driving service Uber, Lyft and other app-based driving services to open in Maryland. Uber is a driving service based off a phone app that allows customers to find an Uber driver near them, who then will pick them up and take them to their destination.

Mautz said this Memorial Day weekend, Uber is going to “turn its lights on in Maryland.”

It’s good news for both urban and rural areas of the state, he said — rural areas because ride-share is a viable form of transportation in those regions, like on the Eastern Shore.

“I think it’s got a strong future on the Shore. There are independent individuals who can drive for Uber and create some economic growth, and it can also help people in rural areas who are trying to get from one place to another who don’t have access to a taxi,” Mautz said.