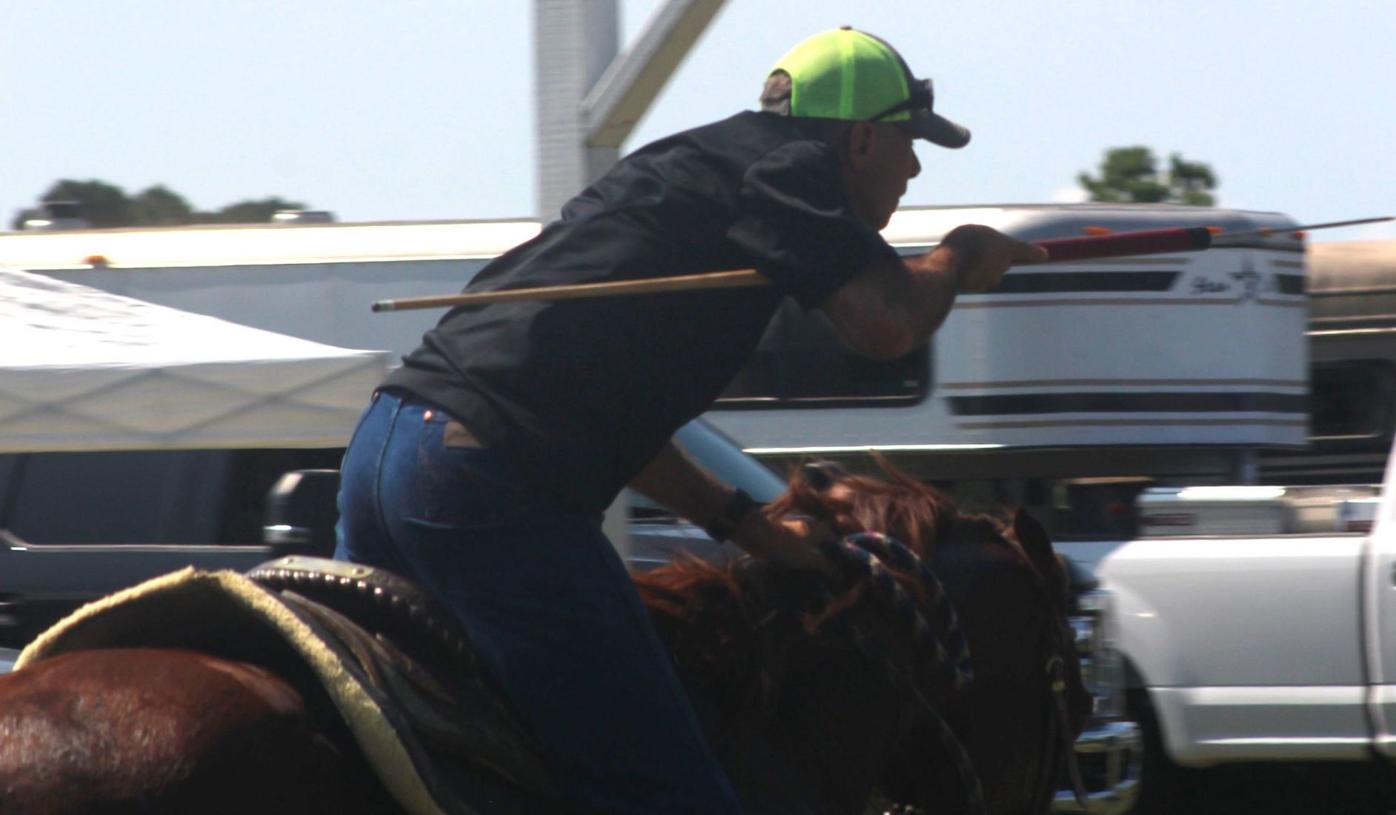 A jouster spears a ring on Sunday, Sept. 6, during the Caroline County Jousting Tournament. 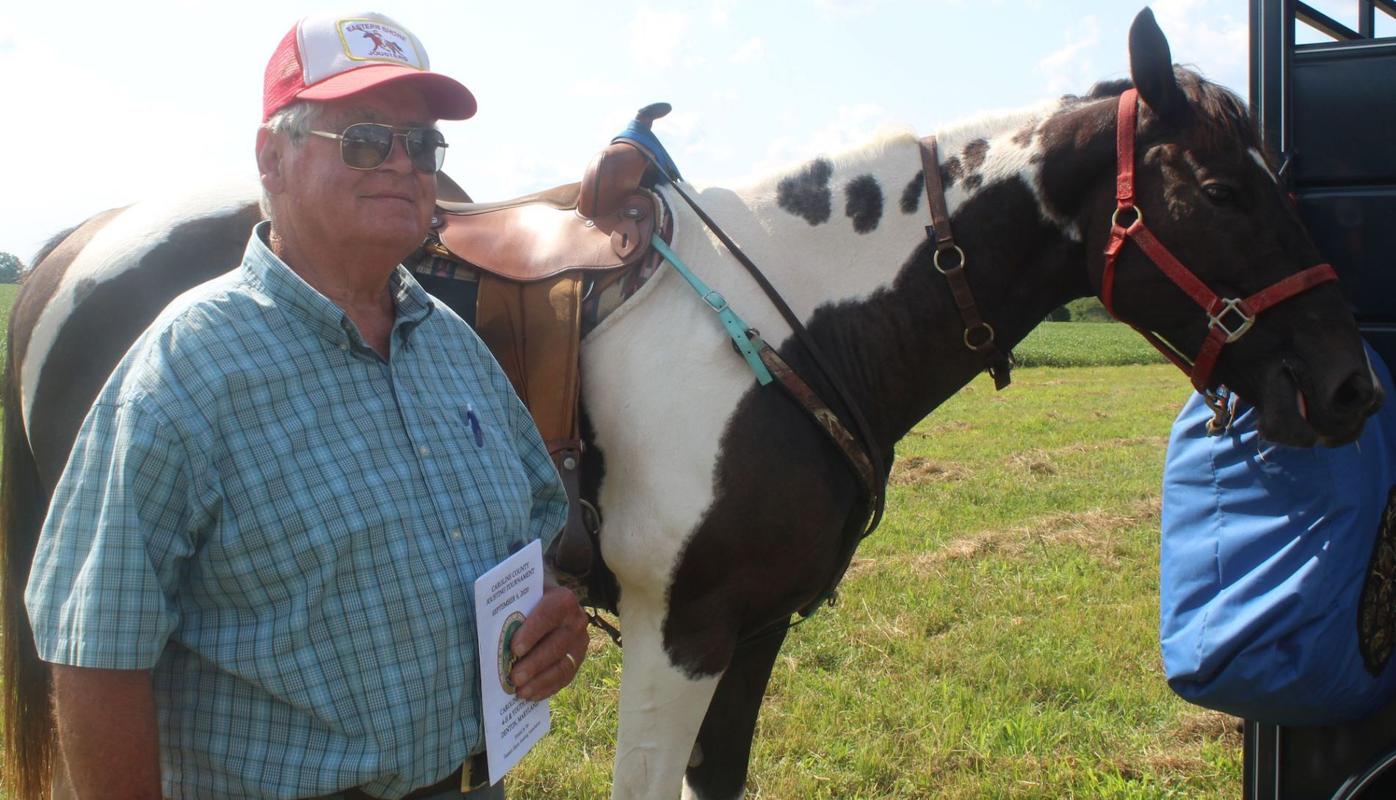 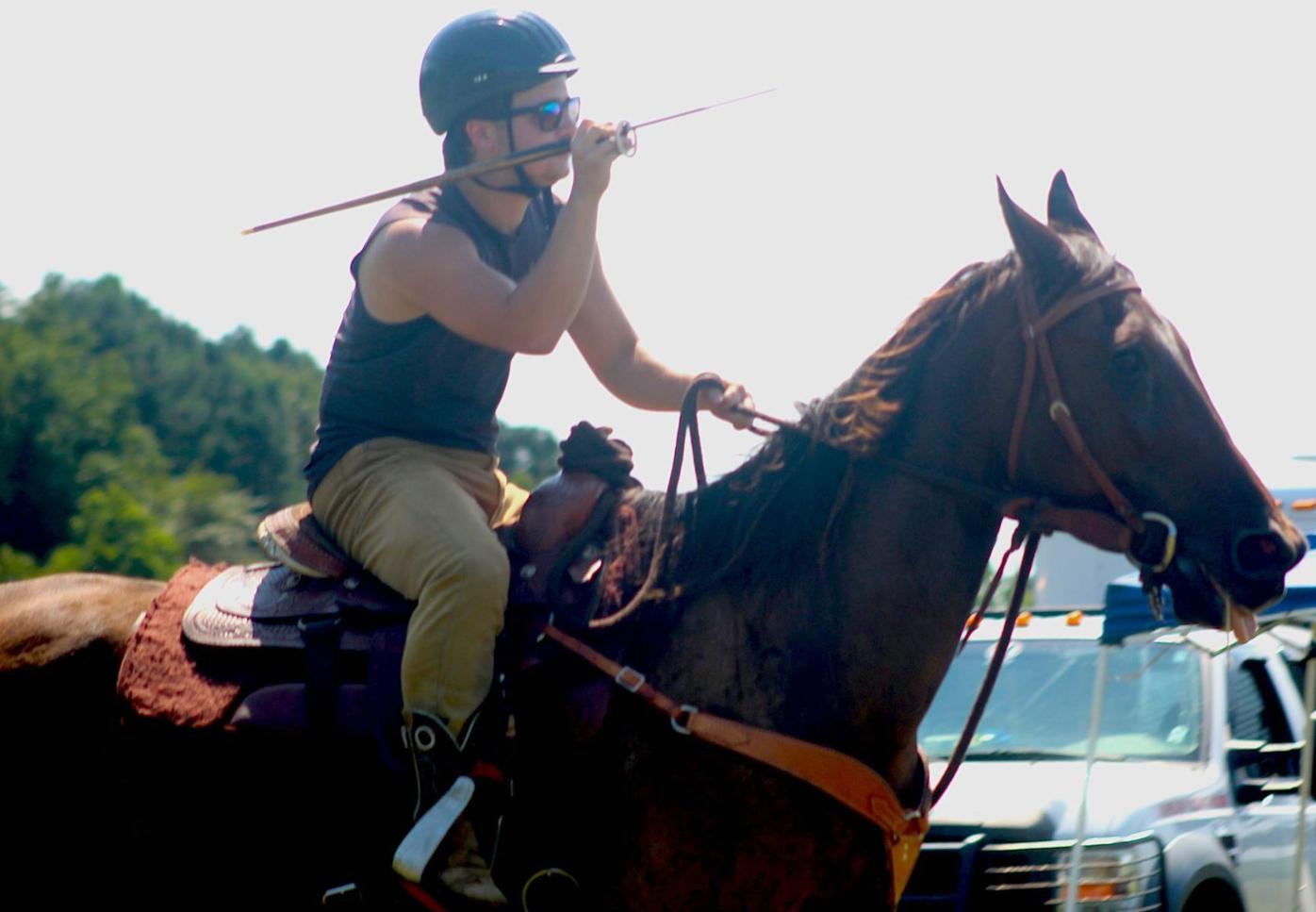 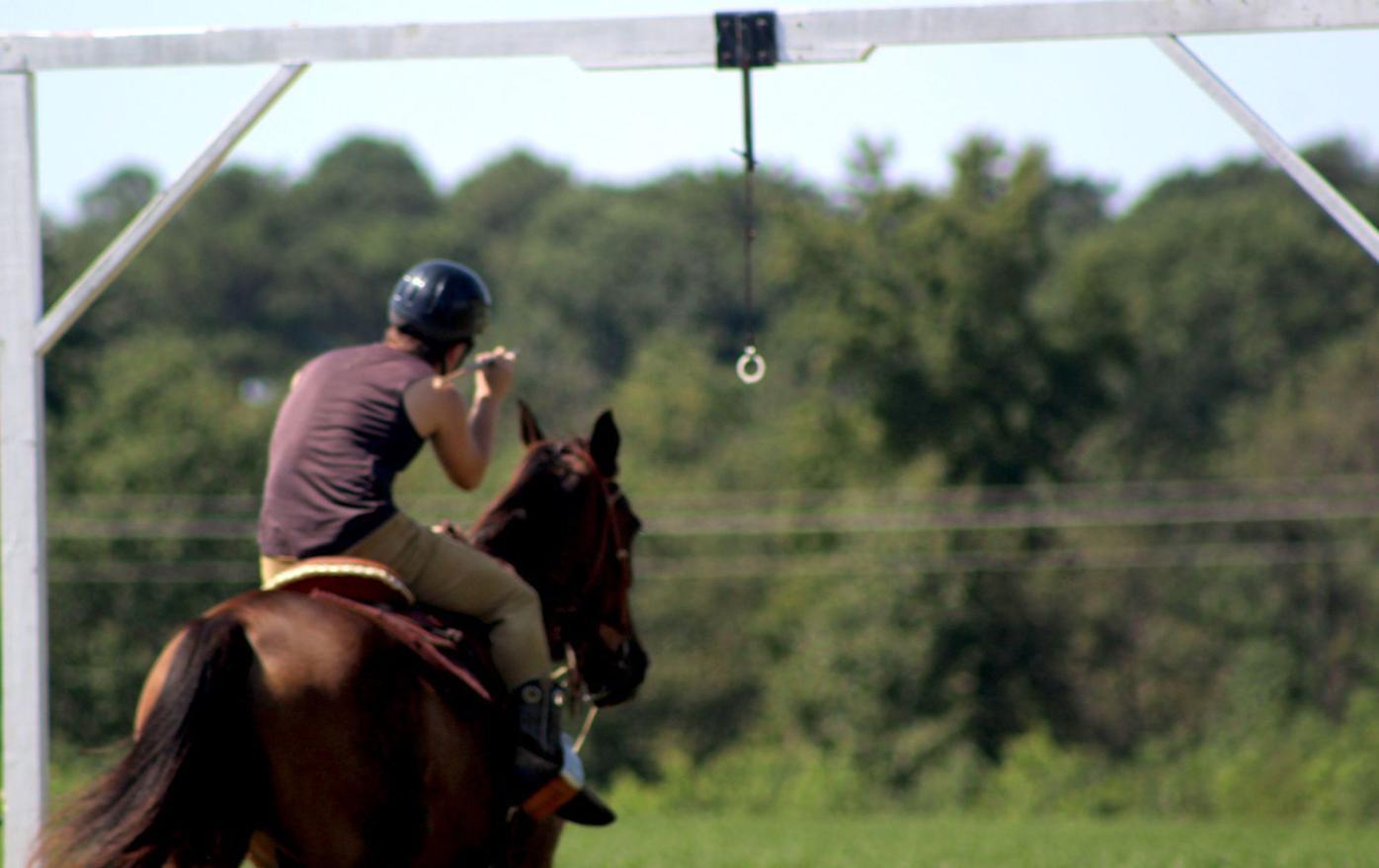 A rider at the ring jousting tournament held at 4-H & Youth Park on Sunday, Sept. 6, aims for a hanging ring. 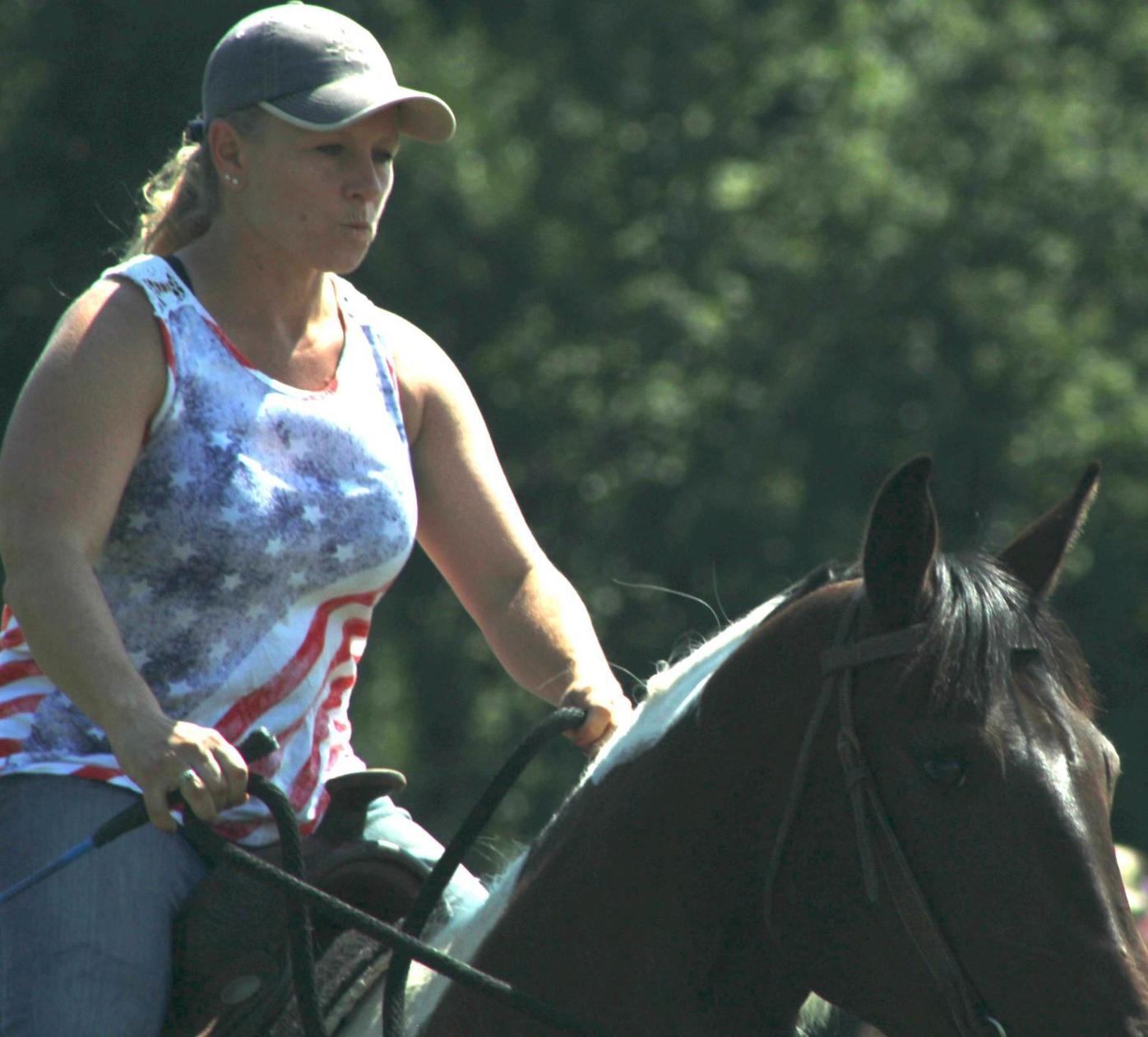 A jouster lines up at the beginning of an 80-yard course. 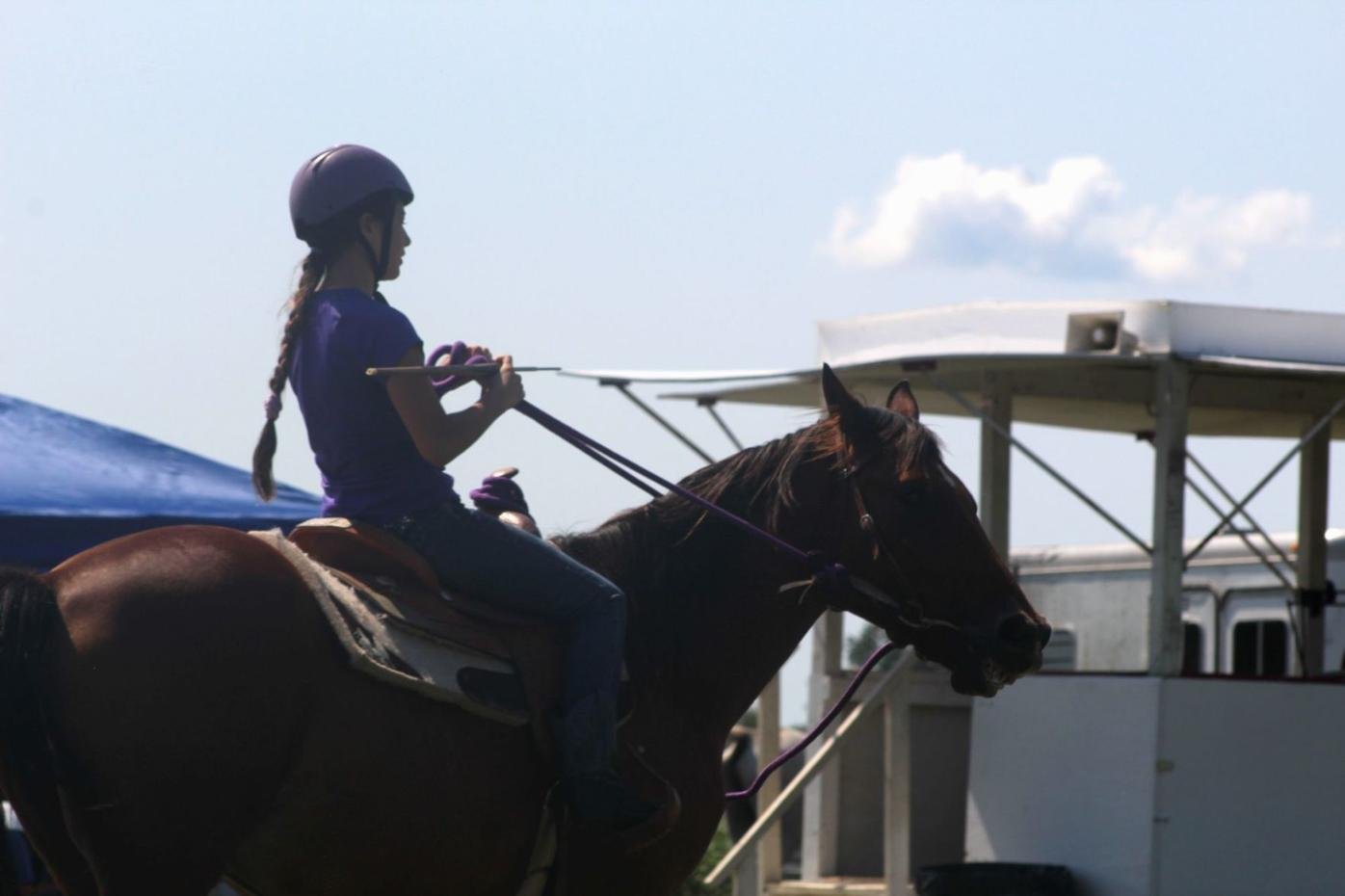 The Eastern Shore Jousting Association holds four different classes for riders to compete in at its tournaments: novice, amateur, semi-pro and professional.

A jouster spears a ring on Sunday, Sept. 6, during the Caroline County Jousting Tournament.

A rider at the ring jousting tournament held at 4-H & Youth Park on Sunday, Sept. 6, aims for a hanging ring.

A jouster lines up at the beginning of an 80-yard course.

The Eastern Shore Jousting Association holds four different classes for riders to compete in at its tournaments: novice, amateur, semi-pro and professional.

DENTON — The sun was beating down hard as Alyssa Jastram lined up her horse, Azale, between two wooden posts at the beginning of an 80-yard grass course.

The 14-year-old ring jouster was sporting a jockey helmet and a bright pink shirt. She held her lance down and leaned over Azale, in preparation to make it down the field in less than eight seconds and snag all three hanging rings along the way.

Azale only had one good eye, but he was a seasoned jousting horse. Besides, the “Maid of Bridle Ridge” had practiced nearly everyday for this tournament. And her mother, a former professional jouster herself, was watching. Alyssa wanted to win for her, too.

“All right, fair lady,” the announcer began, indicating she could begin.

Azale wasted little time: he bolted forward as Alyssa leaned to the side of him, her lance sticking out ahead. She nudged the lance into the first ring as Azale blew through the overhanging arch and headed toward the end of the course.

By the end of the day, Alyssa would sweep nine other riders at the Caroline County Jousting Tournament Sept. 6 at 4-H and Youth Park on Detour Road in Denton. She won first place in both her classes, semi-professional and amateur, with little difficulty.

But the tournament is less about the trophies than it is about following her passion.

“I’ve jousted since I was 3,” she said. “You bond with your horse, it’s a fun, competitive game, and you get to know the people in your class.”

Alyssa spends much of her time around Azale and 13 other horses on her property in Ridgely. She trains relentlessly at ring jousting and eventing, a sport in which she competes on horseback, navigating obstacle courses and trick rides.

“I’m outside way more than I am inside,” she joked.

While Alyssa won two of the three main classes, Bradley Enfield, the “Knight of Little Antietam,” won the Anthony Reinhold trophy after notching a first place win for the professional class. “Maid of Hope” Angel Morris triumphed in the novice class.

Some 32 riders competed at the second jousting tournament held by the Eastern Shore Jousting Association this year. One more tournament will be held at Martin Sutton Park in Ridgely on Sept. 20. Of course, the pandemic disrupted the jousting world, too.

“We normally have six to eight tournaments on the Eastern Shore,” said Dorsey Wooters, chairman of the association. “But due to COVID, this is only our second one.”

His association is part of the National Jousting Association, which keeps the sport alive in the DMV area by hosting national tournaments usually twice a year.

Since 1962, ring jousting has been Maryland’s official state sport. It was one of the first sports in the state, dating back to the founding of the colony, according to the Maryland Jousting Tournament Association.

The sport derives from the traditional jousting most know of — like those armored knights battering each other at the Renaissance fair with lances. When these knights practiced in the Middle Ages, they typically used hanging rings to hone their skills.

The sport is especially big on the Eastern Shore, where many compete in local tournaments before moving onto states or nationals.

Jousting challenges riders to spear three separate rings, each of which hang from wide arches arranged in a line down the field. A rider must make it down the course in eight seconds and spear as many rings as possible along the way.

Each competitor gets three runs for a possible high score of nine speared rings. In each class, from novice to professional, the rings are lower to the ground, increasing the difficulty of nailing them.

“It’s communication between rider and horse,” Wooters said. “It takes a lot of practice. Some of the horses out here today, they haven’t been ridden much. Once you’re at the tournament, it’s gotta be your best riding.”

At the 4-H and Youth Park, at least 50 people were sprawled out on either side of the course, watching the competition with enthusiasm for nearly five hours. Ring jousting can be relaxing for spectators.

“We’ve lived in the country our whole life, so we like to watch the horses and see the young children ride,” said Editha Towers, who sat in the shade and watched the tournament with her husband. “You have to love horses to enjoy something like this. But I always had horses since I was a little girl.”

For Alyssa, the next step is the Ridgely tournament, and then states, which will be held on the first Saturday of October this year. But the “Maid of Bridle Ridge” is competing for two: her own spirited passion for the sport — and her mother’s.

“My mom has jousted since she was 12,” Alyssa said. “She’s in the (National) Jousting Hall of Fame. But she hasn’t been doing it much anymore, because she came home with a major concussion in 2016.”

Sabrina Jastram watched her daughter win Sunday, and she had cheered the loudest for Alyssa. After all, riding — and winning — runs in the family.