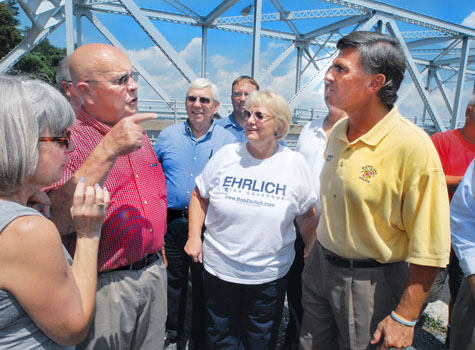 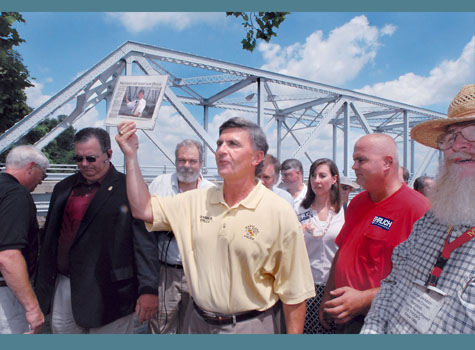 Maryland gubernatorial candidate Robert Ehrlich holds up a Star Democrat story reporting on one of his prior visits to the Dover Bridge as he speaks Thursday afternoon at the bridge to constituents and elected officials, including Sen. Richard Colburn, R-37-Mid-Shore, Caroline County Commissioner Roger Layton, Del. Jeannie Haddaway, R-37B-Talbot, Caroline Commission President Jack Cole, and Caroline resident George Jackson.
1 of 2

TANYARD Reporting a "weird sense of deja vu," Republican candidate and former Gov. Robert Ehrlich visited the Dover Bridge on Thursday to pledge his support for a new span, almost six years to the day since he announced millions of dollars in state funding for the project, which subsequently disappeared from the state's transportation budget.

"If I am re-elected, it will get done this time," Ehrlich told the several dozen people who came to show their support for either a new bridge, Ehrlich's run for governor, or both.

It was July 22, 2004, when, as governor, Ehrlich visited the bridge to announce that $41 million in state funding had been dedicated to designing, engineering and constructing a new fixed-span bridge with a 50-foot clearance over the Choptank River, eliminating the need for the swing span on the current bridge, which frequently has malfunctioned and left motorists stranded.

On that day in 2004, Ehrlich said state officials hoped to have the new bridge finished by 2011. Instead, the old bridge still stands, having malfunctioned as recently as June 27.

"It's a public health issue," Ehrlich said. The bridge connects Talbot and Caroline counties, and is a main route to the Memorial Hospital at Easton for Caroline and northern Dorchester county residents. "This issue has been around far too long; something should've been done years ago."

Ehrlich said he had no idea what happened to the money earmarked for the new bridge.

"I don't know the answer to that," Ehrlich said. "Elected officials here (delegates and state senators) are not getting the answers to their questions."

Del. Jeannie Haddaway-Riccio, R-37B-Talbot, said she and her fellow delegates had been asking since February how federal stimulus money was secured to construct new guard rails on U.S. Route 50 in Easton while the 78-year-old Dover Bridge is still unfunded.

"We can't get answers," Haddaway said.

Ehrlich said this year's election will not be a wholesale anti-incumbent environment, but he felt the elected officials who supported the federal stimulus plan and what he called a "jobless recovery" will be ousted.

"I pledge, if I win this election, I will change that culture again in Annapolis," Ehrlich said.

Promising to fund a new bridge was easy, Ehrlich said.

"I made it the last time (I was in office)," Ehrlich said.

Ehrlich was introduced to Mark Donovan, whose father was killed in an accident on Dover Bridge in 1996, when the van he was driving was tapped from behind by another vehicle as traffic slowed for a turning truck, sending the van across the center line and head-on into a tractor trailer.

The bridge has 10-foot-wide lanes, two feet short of the federal standard. Donovan said if the bridge had been wide enough, perhaps the vehicle that hit his father's van could have turned to the right.

"Two feet would have made a big difference here," Ehrlich agreed.

Before Ehrlich's arrival, Donovan said he joined the fight to get a new bridge after he heard George Jackson, an American Corner resident and longtime activist, talking about his efforts on the radio.

"I'm here in honor of my father," Donovan said. "I'm trying to save someone else's loved one."

Jackson, who was personally congratulated by Ehrlich for his leadership, said Ehrlich's first visit in 2004 was like Christmas in July.

"But Christmas was over when he didn't get re-elected," Jackson said. "It's been like the Grinch ever since."

Jackson said he was pleased with the turnout for the event. He said twice as many people attended Thursday's event as did the 2004 announcement. Many of those present shared stories amongst themselves of problems they had experienced, caused by the bridge. Meanwhile, passing motorists sounded their cars' horns, prompted by a sign held aloft by Suzanne Lahman, of Preston, reading "For a new bridge honk."

"People know now they have to come out and show their support if they want a new bridge," Jackson said.

State Sen. Andy Harris, R-7-Baltimore/Harford, who is running for the First Congressional District seat this year, did not attend Ehrlich's visit Thursday, but he toured the bridge June 23. Though he made no promises in June to support a new bridge if elected, he released a statement Thursday pledging to do just that.

"When I visited the Dover Bridge several weeks ago, I found it to be in severe disrepair," Harris said in the statement. "When I am elected to Congress, I will work with Gov. Ehrlich to ensure the residents of the Eastern Shore can travel on this vital crossing without fear of the bridge being completely inoperable."