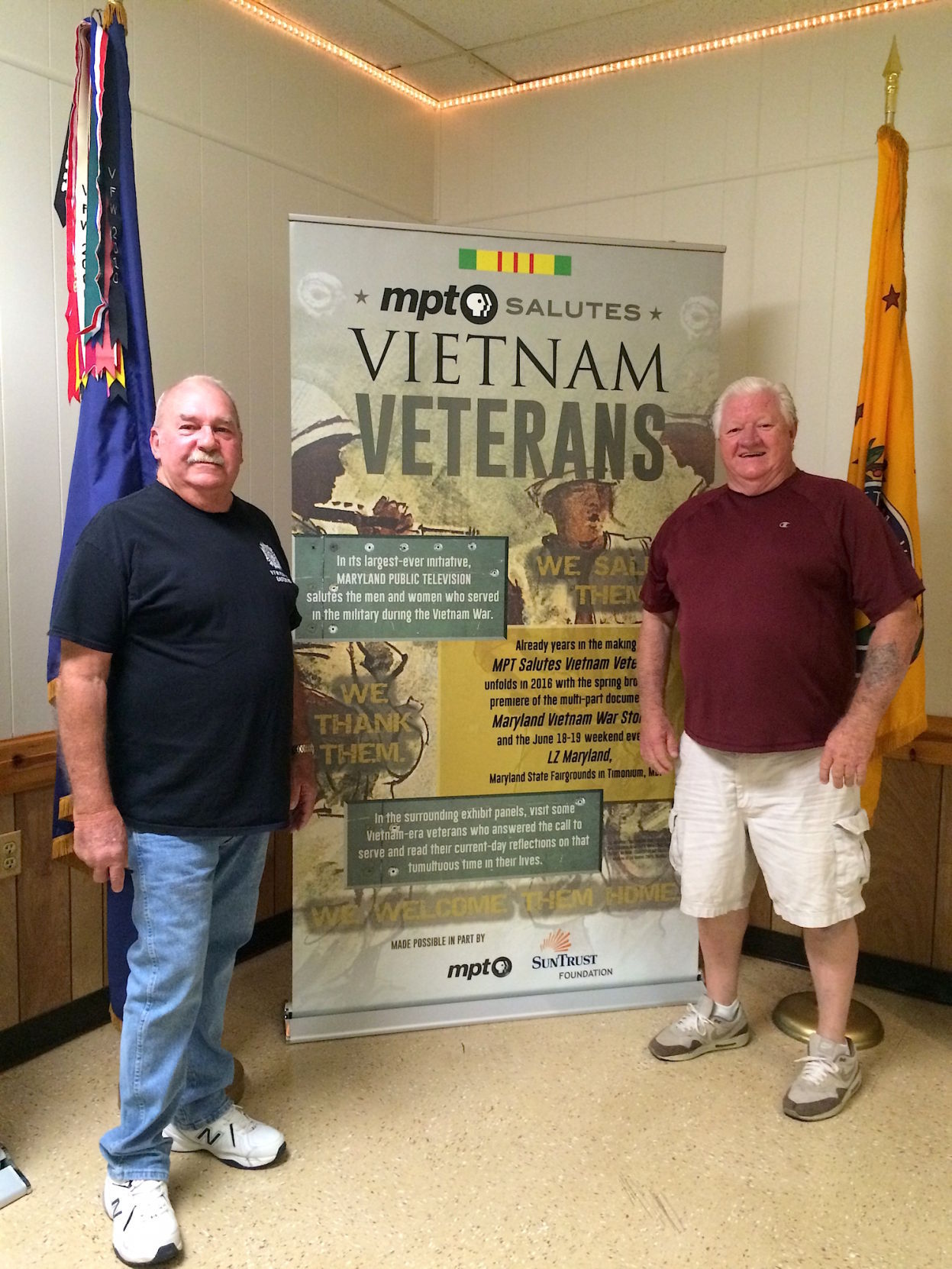 Veterans Dan Erdell, left, and Glenn Murray stand beside a portion of the MPT Salutes Vietnam Veterans Traveling Exhibition, which will be stationed through Friday, Aug. 21, at VFW Post 5118 in Easton. 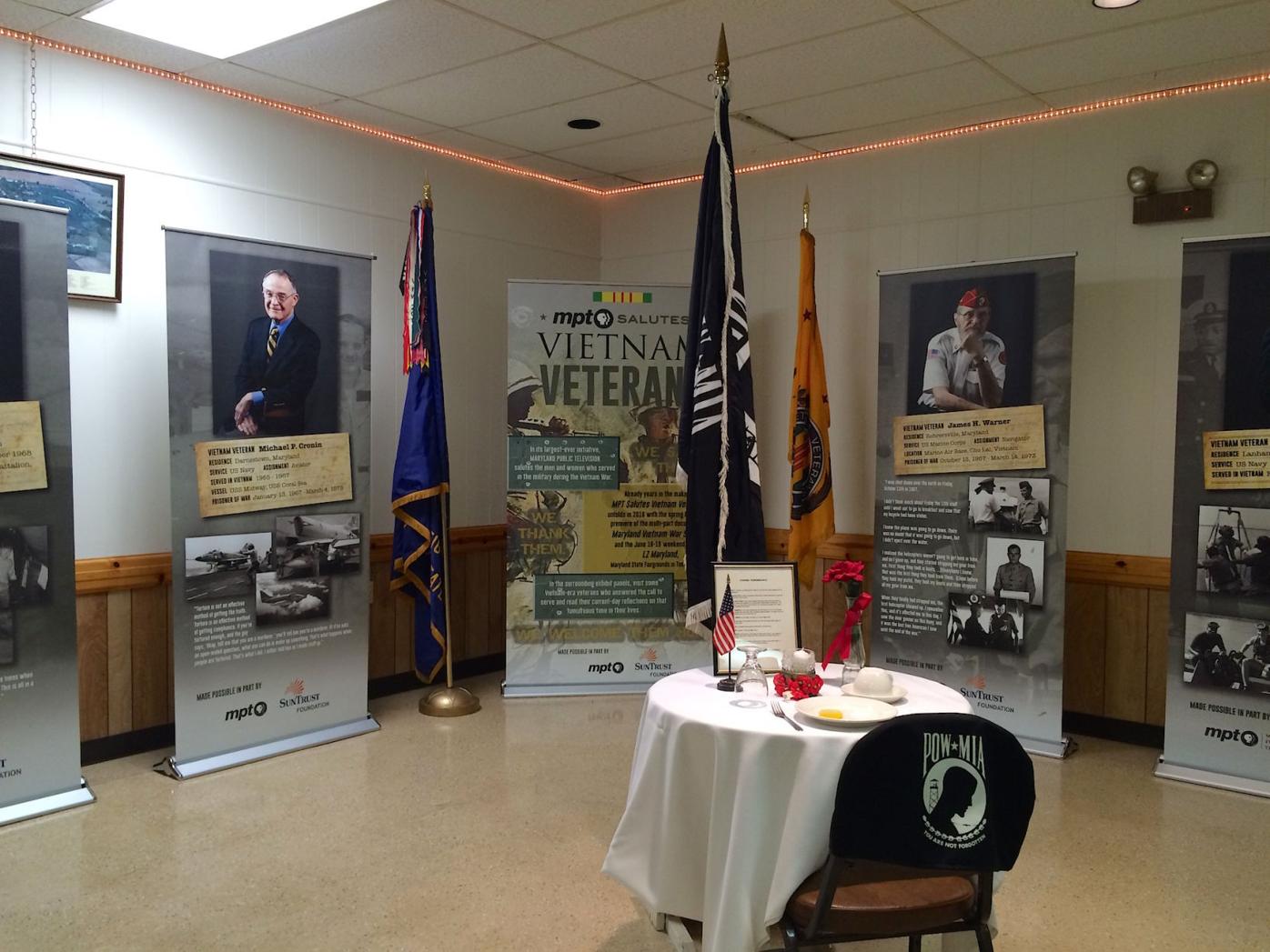 Veterans Dan Erdell, left, and Glenn Murray stand beside a portion of the MPT Salutes Vietnam Veterans Traveling Exhibition, which will be stationed through Friday, Aug. 21, at VFW Post 5118 in Easton.

EASTON — A Maryland Public Television exhibition is giving Vietnam War veterans the gratitude, appreciation and recognition that many veterans feel is long overdue.

The exhibition features 11 of the 16 veterans’ banners that are showcased in the traveling exhibit, with the remaining five banners and several Vietnam-era artifacts featured at this past week’s Maryland Association of Counties (MaCo) conference in Ocean City.

MPT crafted the exhibit’s 16 featured veterans’ banners by hosting listening sessions in which more than 90 veterans were interviewed by documentary producer and director, Ken Day. Day selected interviews for a three-hour documentary, which will air May 2016.

Jessica Campbell, MPT’s director of special events, said the documentary will be told “through the mouths of those in Maryland that have served.”

“It’s important to have an oral history,” Campbell said.

Fred Shinbur, a Vietnam War veteran and MPT’s Vietnam project coordinator, said the project has been a long time coming.

“Many Vietnam veterans didn’t get the welcome home or the ‘thank you’ they deserved. This is about giving them the proper welcome home they never got,” Shinbur said.

Shinbur said he always has supported veterans issues and has been the chairman of the Maryland Veterans Commission for the past eight years. Former Gov. Martin O’Malley appointed him to the position and Gov. Larry Hogan reappointed him.

He said when he learned what MPT president Larry Unger planned to do with a project telling the stories of Vietnam veterans, he knew he had to be a part of it. He became a member of the task force organized to help put it together. When he was asked to take on the coordination of the project for MPT, he came out of retirement to do so.

Shinbur made the Army a career, retiring 12 years ago as a chief warrant officer 5 after 36 years of service. He served in the Vietnam War for 13 months from 1968 to 1969.

When he was drafted from Wyoming at the age of 22, he reported for two months of training and was sent to Vietnam June 5, 1968.

He said, at first he had “no idea why we were there” and he didn’t understand the war. He said his age made him one of the “old men” sent to fight the war.

“You do what you have to do — you have to go. You report ... I was the old man. Most were 18 — they were just kids. They really looked to me for a lot of leadership,” Shinbur said.

Shinbur was assigned first to be a radio telephone operator (RTO), which he said made him a target. After five months he was promoted to platoon sergeant and soon afterward became a “point man,” whose job it was “to get people from Point A to Point B.” He said a point man’s life expectancy was not long during the Vietnam War. To this day he maintains he had the best two jobs during the war because he “knew everything that was going on.”

When he was discharged, he said the Army advised him and his fellow soldiers not to travel home in uniform, due to protesters stateside and the unpopularity of the Vietnam War. He said, when he returned stateside, those who served were treated terribly by most people.

“There was a lot of civil distrust. The citizens really blamed the warrior. I rarely talked about being a Vietnam vet. There was just so much distrust, hatred and resentment (toward the Vietnam veterans) ... We earned the right to come home ... We just wanted to get home and get rid of the uniform,” Shinbur said.

Shinbur said the MPT Vietnam project helped him to come full circle with regard to the war.

“I can finally be a part of something that recognizes the character of the Vietnam vet. We were just doing what we were told ... We were treated so poorly. I’m not going to let that happen again,” Shinbur said.

Shinbur said many Vietnam veterans have bonded over their common experience and have vowed “never again will one generation of veterans abandon another.”

He said Vietnam veterans are being viewed differently now because of recent combat in Iraq and Afghanistan. He said the traveling exhibit is “simple but powerful” and helps to “promote thought and interest in the Vietnam veteran and the era.”

The traveling exhibit also is being used to promote the two-day special event — “LZ Maryland” — which will take place June 18 and 19, 2016, at the Maryland State Fairgrounds in Timonium.

Campbell said “LZ” stands for Landing Zone, a term that resonates with Vietnam veterans because that was “a pinpoint on a map where supplies were dropped off.”

Vietnam veteran Dan Erdell of Hurlock said LZs also were where combat troops were dropped off or picked up.

He said he was told not to wear his uniform off base after he was discharged from the war in 1966, as well. He reported for service in 1965. He said, seeing the exhibit at VFW Post 5118 made him feel good.

“The war was very unpopular ... it (the exhibit) gives us the welcome home we deserved 40 years ago,” Erdell said.

After returning from Vietnam, Erdell enlisted in the Navy and served for the next 17 years.

“I wanted to see the world,” Erdell said.

Glenn Murray of Cordova was in the U.S. Airforce for 36 years. He said he was a mechanic on aircraft that flew in and out of Vietnam, but he was not stationed there.

He said when he would walk around downtown Dover in uniform college students would spit on him and try to beat them up.

“You almost needed to travel in a group ... I was thinking, ‘I’m serving to protect you so I can come home and get beat up?’” Murray said.