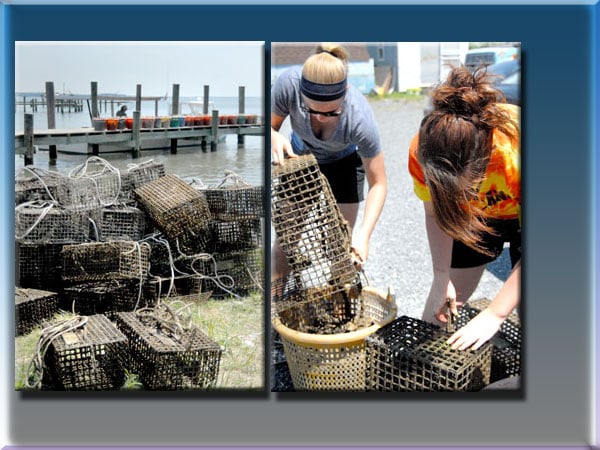 At left, Jeff Harrison waits to load bushels of oysters onto his boat as empty cages wait to be cleaned Saturday. At right, Intern Cosette Larash, left, and Jessica Crane of Phillips Wharf Environmental Center shake oysters from grower cages into bushel baskets. 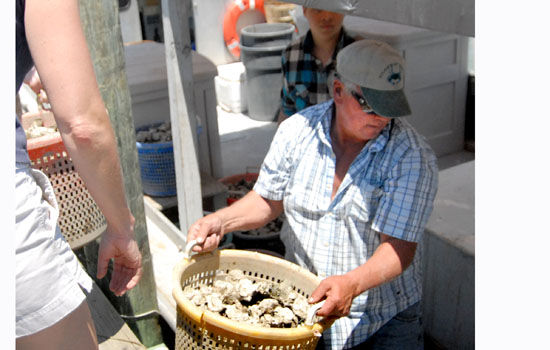 Greg Wilson places a bushel of oysters on his boat SQAW Saturday afternoon to plant on Rabbit Point. 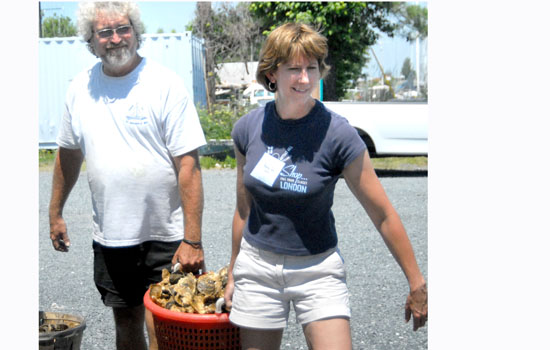 At left, Jeff Harrison waits to load bushels of oysters onto his boat as empty cages wait to be cleaned Saturday. At right, Intern Cosette Larash, left, and Jessica Crane of Phillips Wharf Environmental Center shake oysters from grower cages into bushel baskets.

Greg Wilson places a bushel of oysters on his boat SQAW Saturday afternoon to plant on Rabbit Point.

The program began its first growing season Sept. 2 after 180 cages were delivered to more than 30 Tilghman residents. Carol McCollough, PWEC program manager and TIGO coordinator said, "We received 78 bags of spat from Horn Point Hatchery and at that time, they were the size of a pencil point and now we have really good ones."

Watermen Jeff Harrison and Greg Wilson helped transport oysters and volunteers to Rabbit Point. Harrison, who was going to use a hand tong to bring up a few oysters for McCollough to test for disease, said, "I am glad to help and have been since the start of the program. I really hope this process works; no one wants it to more than me."

Oysters act as a natural filter in the Chesapeake Bay, Kristin Buter, a Chesapeake Conservation Corps volunteer at PWEC, said. Through the program, spat, which are young oysters, have the ability to grow in an environment that protects them from silt, blue crabs and other stresses.

"We are excited with these results. We monitored every location cages were placed and some we were not sure if the oysters would grow, but they did," Buter said.

Clem Zappe, a Tilghman resident and first time oyster grower, watched as the 48 bushels were loaded onto the dock.

"It was interesting to see all the species when the cages came up. I will be growing oysters again and I am getting neighbors to do so too. It is very rewarding," Zappe said.

Residents participating in TIGO had to perform weekly maintenance on their cages. Each one had to be pulled from the water and shaken to ensure all debris was removed. The cages were placed back into the water until the following week.

Eglseder Retirement Specialists of Easton partnered with PWEC and their "Advance and Protect" project received 35 cages of spat for growers scatted throughout Talbot County. Growers addresses ranged from Tilghman to north McDaniel.

Boy Scout Troop 741 members and scout master Bill Roth were lending extra hands to pick up cages and load oysters to the boats. Roth said, "First year we have helped PWEC. We will be glad to help whenever we can. Great project."

Scout Elliott Fisher said the best part was getting to see all the crabs and other species when emptying the cages.

Residents hoping to be growers next year were able to witness the planting on board PWEC's boat Dockside Express. Cox said, "This has been a great day, with great volunteers, and great oysters. And we are getting new growers to join us, this has been amazing and we are certainly looking forward to doing this again."