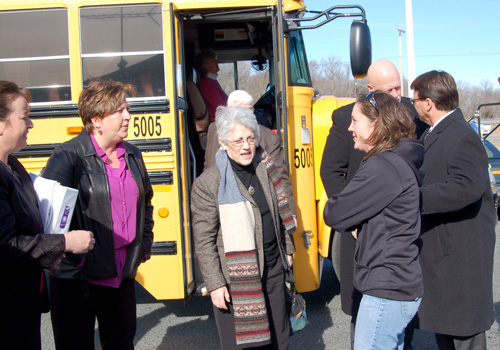 Officials, students and citizens accompanying Nancy Kopp, Maryland state treasurer, on a ride through the J-turn system Friday, exit after the ride and gather around to hear Kopp’s opionion of the experience. 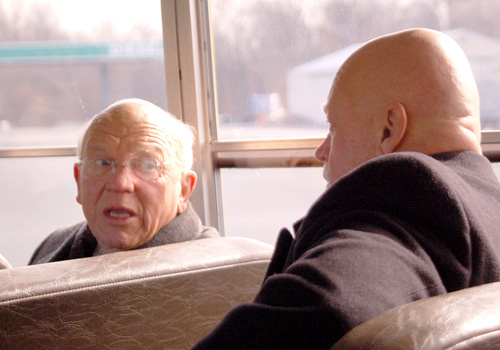 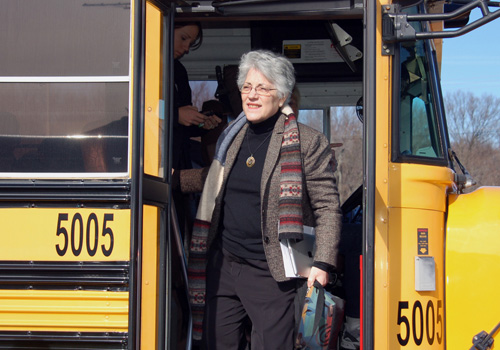 "The J-turn is not a good answer," said Nancy Kopp, Maryland state treasurer, exiting the bus that took her through the J-turn system just north of the intersection of routes 301 and 304 on Jan. 20.

Officials, students and citizens accompanying Nancy Kopp, Maryland state treasurer, on a ride through the J-turn system Friday, exit after the ride and gather around to hear Kopp’s opionion of the experience.

"The J-turn is not a good answer," said Nancy Kopp, Maryland state treasurer, exiting the bus that took her through the J-turn system just north of the intersection of routes 301 and 304 on Jan. 20.

CENTREVILLE Nancy Kopp, Maryland state treasurer, experienced first hand Jan. 20, the potential danger of a 36-foot school bus crossing multiple lanes of traffic and executing a J-turn just north of Route 304 on Route 301 in Centreville where locals are pushing for an overpass.

"This is a very serious problem for people who live here and for others who travel through here. The J-turn is not a good answer," said Kopp after traveling the J-turn system in the front seat of a Queen Anne's County Public Schools bus.

It was just before noon so traffic was mild and the bus was filled with an entourage of public officials, adult citizens and a couple of high school students rather that its normal load of screaming children, but Kopp got the picture, she said.

"I've lived for a long time and can imagine the heavy traffic ... big trucks and impatient drivers," Kopp said. "I was glad there wasn't more traffic and I'm glad they (bus drivers) are taught to move safely."

Kopp's tour was guided by Dwayne Wright, a trainer of Queen Anne's County public school bus drivers, who explained each step of the J-turn system.

From Route 304, the bus, driven by Cherie Hollingsworth, turned right into the yield lane on northbound 301. From there Hollingsworth merged left two regular lanes one lane at a time, turning her signal off and back on before merging into each new lane. Finally, the bus merged into the J-turn lane and executed the turn which briefly put the bus on Route 301 south before turning onto 304 headed toward school.

"23 county buses have to cross over every day," said Wright.

A leader of the campaign to get an overpass at the intersection, Jennifer Fitzmaurice of Centreville, sat with Kopp in the front seat.

"The intersection is dangerous. The J-turn is not the answer and we're hoping the state treasurer can help us move this along," said Fitzmaurice. Both she and Wright noted that there is a lot more traffic in the morning and afternoon during routes, and often impacts from fog or other weather and large trucks.

Del. Steve Hershey, R-36-Queen Anne's, missed the bus which departed promptly at noon, but was waiting at the truck stop when it returned.

"We are working with MDOT (Maryland Department of Transportation) and leaders in Annapolis to raise awareness and get to the bottom of the financial aspects," said Hershey.

The construction estimate is based on HSA bench marking data not an actual bid. A more accurate number will be released after the design is complete.

Hershey said estimates for state projects always come in higher than what would be expected in private construction projects because of labor costs associated with prevailing wage required in government contracting.

The funding would have to come from the state transportation trust fund, Hershey said.

HSA estimates that once funding is guaranteed, the project will take three and a half to four and a half years to complete.

At a luncheon after the bus ride, Wilhelm and Rekstis spoke about their classmate and friend, 15-year-old Connor Rice of Centreville, who died in a collision at the intersection in September.

"It was emotional, from the heart. They did a very good job of presenting the voice of all their fellow students," Hershey said.