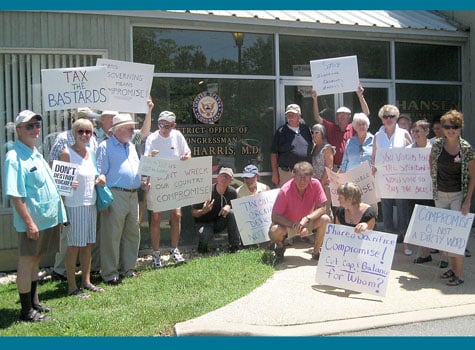 About 20 people gather Tuesday outside the Kent Island district office of Rep. Andy Harris, R-Md.-1st, to call on Harris to compromise on debt limit legislation being debated by Congress. 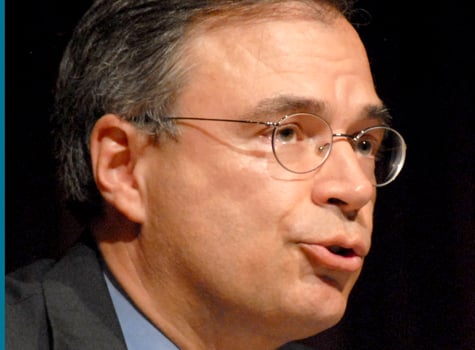 About 20 people gather Tuesday outside the Kent Island district office of Rep. Andy Harris, R-Md.-1st, to call on Harris to compromise on debt limit legislation being debated by Congress.

CHESTER Twenty people gathered Tuesday at Congressman Andy Harris' office to offer their opinion on the current stalemate in Congress over raising the nation's debt limit.

According to Dick Sossi, district office manager and community liaison for Harris' Kent Island office, the group arrived without notice at about noon carrying signs and was invited into a conference room where staffers took copious notes on their concerns. Sossi said he would relay the notes to the congressman.

Most sign messages called for Harris to compromise on legislation being discussed in Congress.

Some of the messages were: "Tax Cuts Create Deficits Not Jobs," "Harris Don't Wreck Our Country, Compromise," "Compromise is Not a Dirty Word," "Tax the Rich, Not the Elderly," and "You Voted for the Spending, Now Vote to Pay the Bills."

On Thursday during a phone interview, Sossi expressed bewilderment when reminded of the spending message.

"I saw that sign and I couldn't figure it out," said Sossi. "I don't recall the congressman voting for something called spending. I don't believe they ever discussed that specifically."

Harris has said he will not vote for legislation to raise the nation's debt ceiling without an amendment to balance the federal budget. On Wednesday, he said that amendment could be voted on as early as Friday.

In a press release on his website that posted Tuesday, Harris said: "By an overwhelming amount, Maryland families and businesses have contacted me to demand that the federal government get its fiscal house in order, stop spending more than it takes in, and balance the budget. I disagree with the President we need a balanced budget amendment, and I won't vote to raise the debt ceiling unless a balanced budget amendment is part of the deal. To create jobs in America again, we must stop the spending spree in Washington."

Federalsburg resident Cheryl Everman, chairman of the Dorchester County Democratic Central Committee, who took part in the protest, said the gathering was organized quickly over the weekend mainly through e-mail and Facebook in response to President Obama's request for people to contact their representatives. They had not intended to speak with anyone in the office. The group included people from Anne Arundel, Queen Anne's, Talbot, Caroline and Dorchester counties. She said those attending were registered as either Democrats or Independents.

"We actually were just going to go down and protest. We had signs," said Everman. "But apparently they didn't want us on the street. So they brought us in and we had about a 90-minute meeting with Dick Sossi. We laid out the fact that we believe that Congressman Harris' position is untenable, and it's going to drive us off a cliff if we don't settle this debt ceiling issue."

Everman said Harris' staff listened to their concerns. "I don't think anyone of us is under the illusion that it's going to make a difference, but we did get our point across," she said.

Everman expressed surprise at some of the responses the group received to questions.

"We asked repeatedly about Congressman Harris' position on the debt ceiling and all we got was, "We don't know."