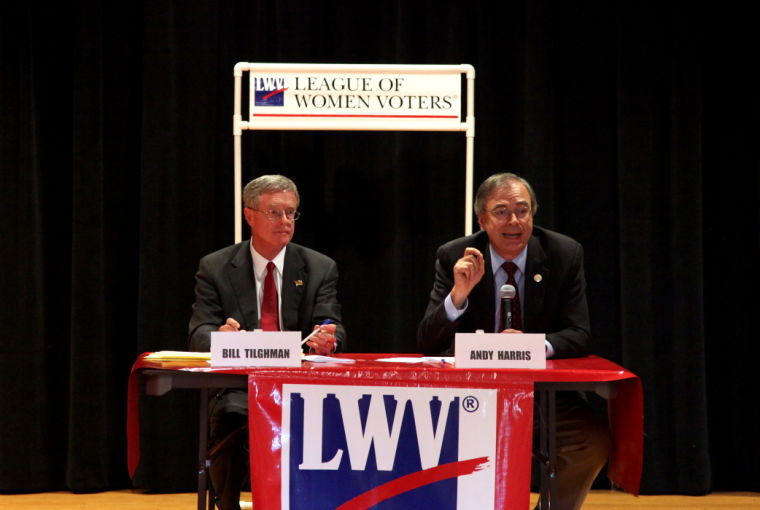 Candidates for U.S. House of Representatives 1st District, Bill Tilghman (left) and incumbent Rep. Andy Harris (right) address questions from the public ranging from foreign policy to the state of the economy, Sunday Oct. 19. The forum in the Cadby Theatre at Chesapeake College was sponsored by the Kent, Mid-Shore and Queen Anne’s Leagues of Women Voters. 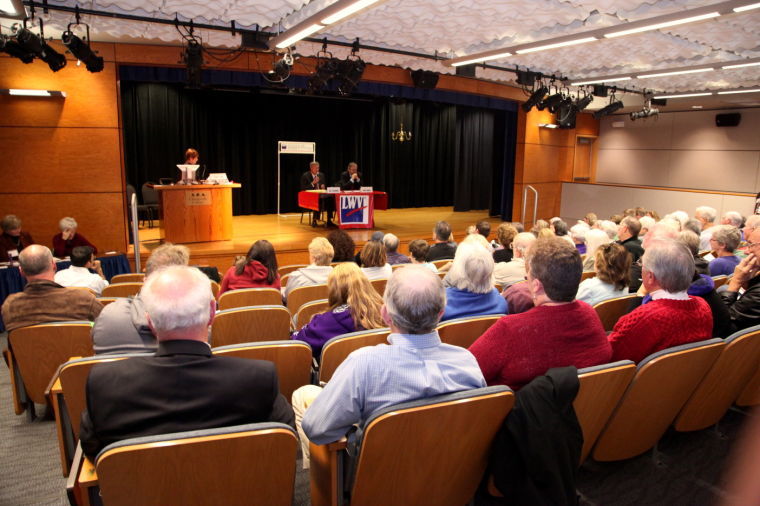 Dana York, a member of the Queen Anne's County League of Women Voters, moderates a forum for candidates for U.S. House of Representatives 1st District on Sunday, Oct. 19 at the Cadby Theatre at Chesapeake College. 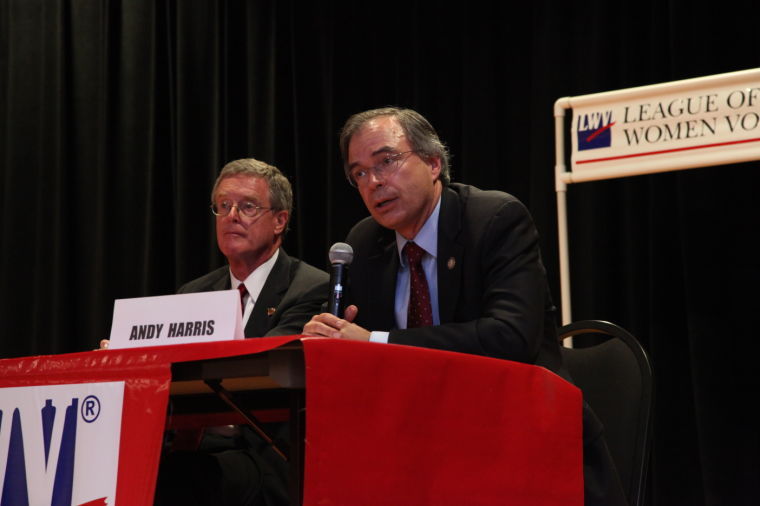 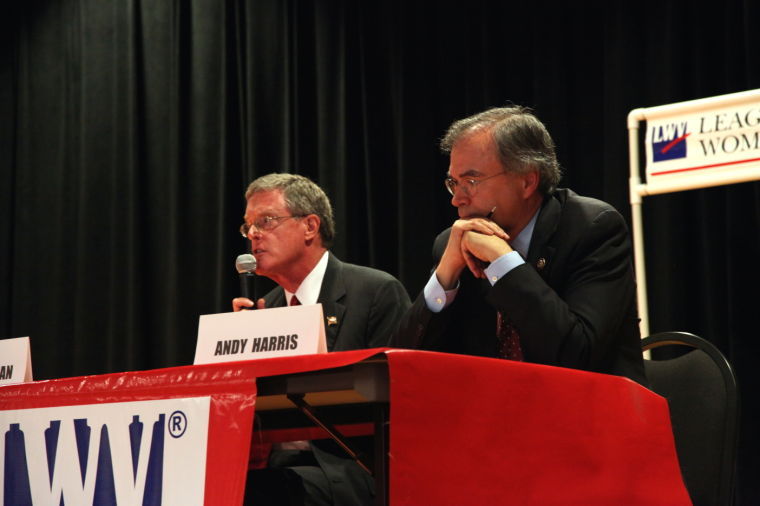 Candidates for Maryland's 1st District in the U.S. House, Bill Tilghman (left) and incumbent Andy Harris (right), address questions from the public ranging in foreign policy to the state of the economy, Sunday Oct. 19. 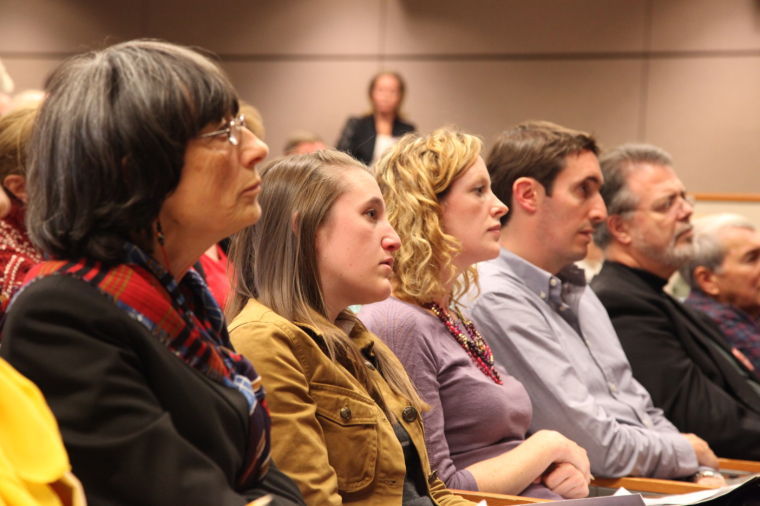 Audience members listen to candidates for Maryland's 1st District in the U.S. House of Representatives speak at a forum sponsored by area Leagues of Women Voters on Sunday, Oct. 19.

Candidates for U.S. House of Representatives 1st District, Bill Tilghman (left) and incumbent Rep. Andy Harris (right) address questions from the public ranging from foreign policy to the state of the economy, Sunday Oct. 19. The forum in the Cadby Theatre at Chesapeake College was sponsored by the Kent, Mid-Shore and Queen Anne’s Leagues of Women Voters.

Dana York, a member of the Queen Anne's County League of Women Voters, moderates a forum for candidates for U.S. House of Representatives 1st District on Sunday, Oct. 19 at the Cadby Theatre at Chesapeake College.

Candidates for Maryland's 1st District in the U.S. House, Bill Tilghman (left) and incumbent Andy Harris (right), address questions from the public ranging in foreign policy to the state of the economy, Sunday Oct. 19.

Audience members listen to candidates for Maryland's 1st District in the U.S. House of Representatives speak at a forum sponsored by area Leagues of Women Voters on Sunday, Oct. 19.

WYE MILLS — It was a forum, not a debate, so the conversation stayed mostly civil in the Cadby Theatre at Chesapeake College on Sunday, Oct. 19. But Andy Harris, incumbent representative for Maryland’s 1st District in the U.S. House, and his challenger Bill Tilghman, set out distinctly different visions on policy.

On how to deal with the threat posed by Islamic State militants, Harris and Tilghman took markedly different tones.

“The bottom line is we are losing the war on terror,” Harris said. The problem with the Islamic State, he said, started when President Obama did not leave a residual force behind in Iraq, a decision that Harris said went against advice from his generals. The Iraqi army then collapsed in the face of Islamic State attack.

“We made that mistake and there’s no taking it back,” Harris said. He criticized Obama’s statements that the U.S. would not put “boots on the ground” in the conflict.

“To tell the enemy that we will not do ... the most effective thing we can if we need to ... that telegraphs a message to our enemies.” He said the U.S. is engaged in a life and death struggle, and may need ground troops to win it.

“This is a religious war,” he said, different from all the nation’s previous wars.

Tilghman said he traveled frequently to the region when he worked for a large energy company, and he framed the situation very differently. He said the situation in Iraq and Syria is a civil war. The region is undergoing instability, because of a rapid modernization process without the building blocks in place to make it a smooth transition, and it will be a process that lasts for years.

“We can’t stop it. We do not have the resources to do the kind of nation building that would be needed to make a difference in this huge messy process,” he said. “We need to contain ISIS ... we cannot defeat them.”

The Islamic State, he said, is a shooting star that will burn itself out, and the people it conquers will not put up with its barbarism.

The military needs to be modernized to deal with the new war theater, he said, and also mentioned cyberterrorism as a threat that needs to be dealt with.

On dealing with legislative gridlock and making government work more effectively, Harris pointed to the Senate as the problem. The House passed hundreds of bills, he said, that the Senate wouldn’t consider.

“(The process) is broken because we pass bills out of the House, and the Senate won’t take them up,” he said. “Until that’s fixed the legislative process is not going to work the way it’s supposed to.”

Tilghman said Congress is stalled because the parties deeply distrust each other, and policies should be based around the best of both parties and basic American values like hard work, responsibility, frugality, and a strong middle class. “These are the values that we can use to start to build trust,” he said. He would relentlessly focus on practical problem-solving as a representative, and would support any good idea that makes America better, he said. “I do not feel compromise is a sellout.”

He said gerrymandering, or politically manipulated voting districts, creates safe places for hardcore “true believers” and “safe thinking,” and also said there should be balance to the influence that immensely rich people have through political spending. A debate is needed on limiting the effect of money on politics, he said. “It’s unhealthy in our democracy for corporations to take sides in politics.”

On cleaning up the Chesapeake Bay, both candidates pointed to the Conowingo Dam as a major problem. There is no question that it needs to be dredged, Tilghman said, but that is a massive undertaking that will take years.

Harris said the dam will stop being able to trap polluting sediment very soon, but the Army Corps of Engineers is doing a study now that will assess various ways to address the problem.

Then the candidates went their separate ways.

“I very vigorously support the Chesapeake Bay blueprint,” Tilghman said, referring to the EPA’s pollution limits and the state’s plans to meet those standards. The goal, he said, is to have the Bay 70 percent cleaner by 2025. He noted the importance of farming and the poultry industry on the Shore, and said “There is no solution for the Chesapeake Bay that doesn’t involve making (agriculture and the poultry industry) part of it.”

Harris said everyone agrees that the Bay needs to be cleaned up, but multiple agencies have come up with different models on how to achieve that, and they have not been reconciled. If there is no common plan, he asked, how is the federal government going to come up with a common approach?

He said the proposed rules to regulate the use of phosphorus in agriculture would “devastate the farm industry and the poultry industry.”

On immigration, Tilghman said the borders needed to be brought under control and well patrolled, and that is close to happening now. Immigrants who have been in the country for some time need to be brought out into the open and given driver’s licenses and work permits and made part of the regular economy. Businesses that use illegal immigrants have an unfair competitive advantage, he noted.

Once these steps are taken, he said, the issue will solve itself. “These are responsible members of our country.”

Harris said his parents were immigrants. “I’m all for immigration ... immigrants are important to this country.” There are “pockets of need” that immigrants are the most logical people to fill, he said. However, there was amnesty for illegal immigrants in the 1980s, he said, and the result is the millions of new illegal immigrants since then. Amnesty “sends the signal overseas that America is open, come on in.”

Tilghman and Harris were also asked whether they support a travel ban to deal with Ebola.

Harris said yes. “I don’t understand how restricting travel of potential carriers into the U.S. can do anything but make us safer.” He said up to 150 people a day are entering the country who could be potential carriers, and asked the audience if they really thought the government is good enough to track those people. He said the infection of a nurse who cared for a man with Ebola demonstrates that all the facts on how to control the disease are not yet known.

Tilghman disagreed, saying he doesn’t think overreaction is smart. If other countries followed the lead of the U.S. in a travel ban it would create more economic harm than is justified by the facts that are now known, he said, although there could come a time when such a ban would be called for, however.

“It’s up to us to have confidence in our government, that our government will know how to keep track ... and treat the disease if it comes up.”

The candidates also addressed a range of economic issues, starting with their opinions on the minimum wage and how to ensure that District 1 participates in the economic recovery.

Tilghman called for cleaning up the tax code, eliminating outdated expenditures and using those funds for infrastructure and education development. He promoted the idea of regional “innovation clusters” that would feature partnerships between educators, businesses and local and federal government, and would create a magnet for investment.

He also said that a gradual rise in the minimum wage is sensible and would not have a negative effect on jobs.

Harris said Maryland has always had an employment advantage, but recently its unemployment level rose higher than the national average. He pointed to state government in Annapolis as the source of the problem, and said he can’t fix that. However, he said what could be done from Washington is to make sure not to do anything to destroy the existing jobs in agriculture, poultry and tourism.

“There are poultry regulations that could destroy the poultry industry,” he said.

Harris said he has no problem with minimum wage jobs, but those aren’t the jobs the state wants. He called for lowering the corporate tax rate at the federal level and in the state to make Maryland attractive for business.

On wealth inequality in the nation, Tilghman cited economist Thomas Piketty’s book “Capital in the Twenty-First Century,” saying there is nothing inherent in capitalism that will stop the wealthiest from gaining an ever greater share of the wealth. “I do not believe that money trickles down to Main Street,” he said. There is a serious problem, he said, that needs to be addressed through policy measures.

Harris focused on the importance of manufacturing to create middle class jobs. “We have to figure out how to get manufacturing in this country,” he said, especially in biomedical products for which there is a growing demand. “Those kind of products in that industry are good paying jobs,” he said, that will do a lot to help with wealth inequalities.