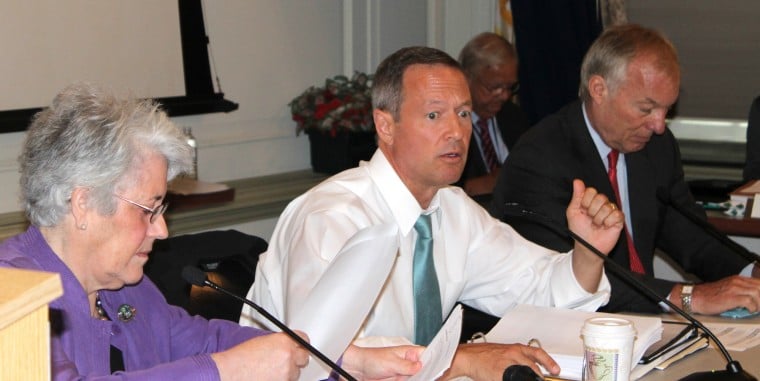 From left, the members of the Board of Public Works — Treasurer Nancy Kopp, Gov. Martin O’Malley and Comptroller Peter Franchot — consider an application for a state wetlands permit for Four Seasons at Kent Island in 2013. 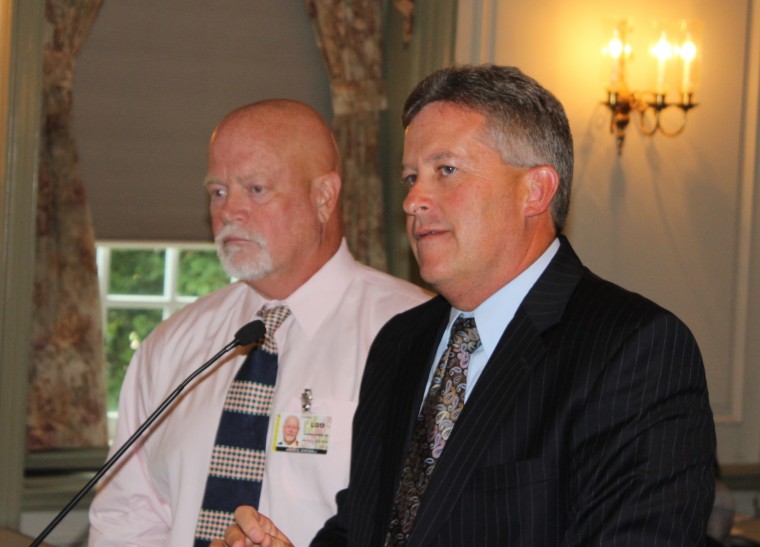 From left, the members of the Board of Public Works — Treasurer Nancy Kopp, Gov. Martin O’Malley and Comptroller Peter Franchot — consider an application for a state wetlands permit for Four Seasons at Kent Island in 2013.

ANNAPOLIS — The developer for Four Seasons at Kent Island will appear before Gov. Martin O’Malley at least one more time after the state Board of Public Works postponed a decision on whether to accept a state license application sought by the developer of the project.

The three-member board agreed on Wednesday, July 24, that they needed more assurances on the part of the applicant before voting on the proposal. O’Malley, Comptroller Peter Franchot and Treasurer Nancy Kopp maintained that the developer needed to hammer out details with Queen Anne’s County regarding several issues including the footprint of the age-restricted community and a proposed 131-acre ecological park.

“We look forward to having continued dialogue with the Board of Public Works and Queen Anne’s County to assure that we will deliver on our plan, including having zero permanent wetlands impact,” said K. Hovnanian in a statement following the decision. “Given that the state’s wetlands administrator and Maryland Department of the Environment recommended that our license be granted, we remain hopeful to receive the Board’s final approval.”

Wednesday marked the second time K. Hovnanian appeared before the Board of Public Works seeking a state wetlands license regarding Four Seasons. In 2007, the same board voted 2-1 to reject the application, arguing that the project was not environmentally friendly.

However, both the Circuit Court of Queen Anne’s County and the Maryland Court of Appeals ruled against the original vote by the Board of Public Works, directing Four Seasons to reappear before the governor. Leading up to Wednesday, the developer revealed a scaled-back version of the 2007 application, including a reduction in the number of proposed houses from 1,351 to 1,079, the removal of a bridge over Cox Creek and a major decrease in the impact on wetlands. Yet, further work is needed.

“As far as I’m concerned it’s neither (a win or a loss),” said Commission President Steve Arentz, who attended the hearing with County Administrator Gregg Todd. Arentz voted in May, along with Commissioners Phil Dumenil and Dave Olds to back the Four Seasons application. “It’s a process and we’ll move to the next step. It’s a good project and I appreciate what the Board of Public Works is asking. I would hope that we could get through this quickly and move forward.”

If constructed, Four Seasons at Kent Island would be the single-largest major subdivision in Maryland’s critical area history.

Jay Falstad, the director of the Queen Anne’s Conservation Association, was one of many county residents in attendance at the hearing to voice his opposition to the Four Seasons project.

“It’s certainly a step in the right direction,” Falstad said. “We applaud the Board of Public Works for taking the necessary time to ask tough questions and I think they’re seeking assurances from the county and the developer. Obviously that’s welcome news to us (and) welcome news to the residents of Kent Island who are going to have to endure this mess.”

Former County Commissioner Gene Ransom spoke on the Board of Public Works’ decision to table the application process.

“We’re going into extra innings,” Ransom said. “It’s better than (the Board) approving it obviously and I hope (Four Seasons) takes the time to realize that there’s got to be a mechanism for them to keep their promises,” Ransom said. “This is a bad project for Queen Anne’s County and hopefully somehow we stop it.”